As an artist, environmentalist activist and biologist, Brandon Ballangée’s work is the epitome of science inspired art. His focus is on the anthropocene; the present time on earth, in which many geologically significant conditions and processes are altered by human activities. Past works by Ballangée have emphasized the collapse of species as a result of human impact. However, in Ti-tânes, the artist focuses on species of fish that have historically thrived in anrtho-altered environments. While many scientists and artists, including Ballangée, have explored mass extinction in their studios, Ti-tânes showcases a story of how some species survive and even succeed as the result of climate change.

Inspired by Greek mythology, Ballangée created Ti-tânes as a means to view ancient species of fish in new light. In his artist statement, Ballangée explains:

“In Greek mythology the Ti-tânes or Titans, were the ancient primordial deities born from Gaia or Gaiê (Earth) and Ouranos (sky). The Titans in a sense were products of primordial nature and eventually overthrown by the Olympians (the more human-like gods represented in classical Greco-Roman mythology). This paradigm shift is a strong metaphor for our Western approach towards nature and the environment, a change from revering the natural world to anthropomorphic adoration which continues to drive human-centric exploitation of natural resources and other organisms. Although the Ti-tânes were defeated by the new human-like gods, they survived banished to austere lands.”

Inspired by ancient species, Ballangée chose animals who have already survived millions of years of evolution, and continue to adapt to their changing environments. These works are an homage to species that just won’t die, who have particular relevance, especially in today’s world of ecological degradation.

Beginning in 2012, Ballangée selected three nine-spined stickleback from a polluted canal in Chamarande (France). Using a Alizarin red dye, the artist carefully stained the fish and cleared the digestive enzymes to allow transparency. The dye adhered directly to the fish bones. Ballangée explains: “From the biological research side this was done to analyze specimens for any developmental abnormalities that in life we could not have seen.”

Ballangée chose a staining method to alter our perceptions of each small organism. To further this abstraction, the artist placed each fish atop a piece of coal as a testament to the animal’s connection to the ancient world, while also referencing the affects of climate change that impact all life as we know it. 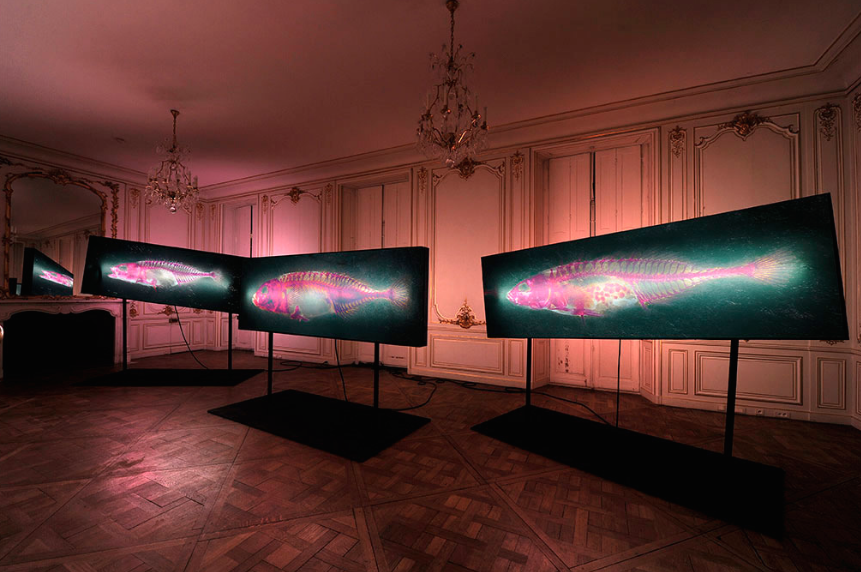 “These artworks are meant as portraits of the individual fish, as each is unique as each of us. Through size (making them larger than life) they are scaled so the human viewer sees them at a magnitude beyond our ordinary bodily scale- grandiose and sublime like nature herself. Metaphorically they are meant to recall the ancient lingering nature deities surviving in banished now degraded environs. Viewed as skeletons they are not meant to represent death but instead life persisting in ecosystems made preternatural by human activity.”

First exhibited in the  Museum Het Domein in Stiddard, Netherlands, as a part of the series Seasons in Hell (2014). While no longer displayed in this physical space, Ballangée hosts a virtual tour on his website.