Julia Buntaine‘s new work – January in the Frontal Lobe is inspired by neuroscience. Buntaine’s series of 31 digital drawings represent an artistic rendition of a brain section as it changes over the course of a month. The first drawing is based on a real brain cross-sectional image (sourced from the Seung Lab at MIT). 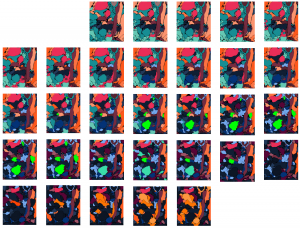 When the stills are viewed simultaneously as a series of 31 days, it is difficult to determine where, if at all, a modification was made to a given image. However when viewed as a gif, the “beat” of the animation quickly reveals a daily transition. Memory made. Memory lost. This work beckons the viewer to experience a reverse synesthesia, marking the passage of days with each altering colour.

In her statement about the work Buntaine writes:

“Since we can’t yet see on the cellular level how the brain changes from day to day, this work is an imagination, an educated approximation, of how this snapshot of the brain may change or not change on a daily basis. Colors standing in for content, the morphologies of the neurons vary slightly as connections are reinforced or weaken. Some colors take over for a few days at a time, acting as a thought which you cannot shake. Some elements largely remain the same, acting as the bedrock of the self.”