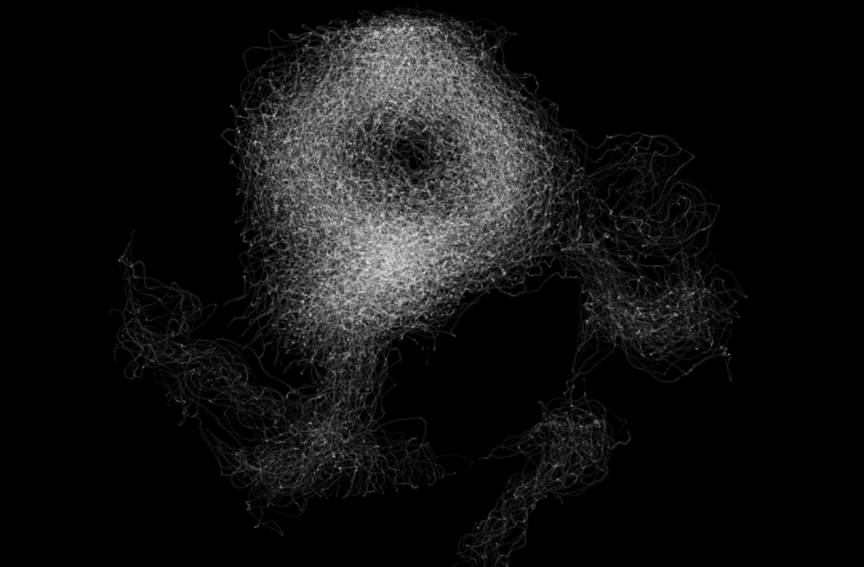 Digital artwork is what Peter Koraca does best. Engaging the nexus between interactive art and 2D/3D designs, Koraca’s data visualizations and sound installations are made for viewing on your desktop and mobile devices. Imagine, scientific art in the palm of your hand. Founder of Crow Interactive Digital Studio, Koraca leads a talent of coders, artists and composers alike in his collective.

His work Traces a Flock is an interactive digital artwork. Inspired by the movement of small birds and bats, Koraca created a self-drawing painting that leaves a digital canvas on your screen.

“The algorithm in use is similar to the one being utilised by the Tallis Habits web-app using a custom built javascript library SimpleCanvas.js. Each of the boids (flock individuals) leaving traces conforms to a few very simple flocking behaviours: alignment (with the flock’s general direction), cohesion (how close to the centre of the flock boids want to be), random walk (boid’s individual random direction), separation1 (how far from the close neighbours it wants to be) and separation2 (how far from the flock it wants to be). Amazingly, from just these few simple behaviours a flock emerges that seemingly has a collective mind of it’s own.”

Of course, as this is an interactive art piece, I had to try it out for myself. The interactive web version mimics birds during the day (black on white) and represents night flight patterns of bats at night (white on black). By manipulating one of the three customizable features, I can create many different flock-like patterns.

Here, I have inverted the background to represent flight patterns at night and included trace outlines (below). The blue circles follow the “boids” as they travel together in small and large flocks, or sometimes randomly on their own. When clicking my mouse to drop more “boids” its position dictates whether they join an existing flock, or travel independently. 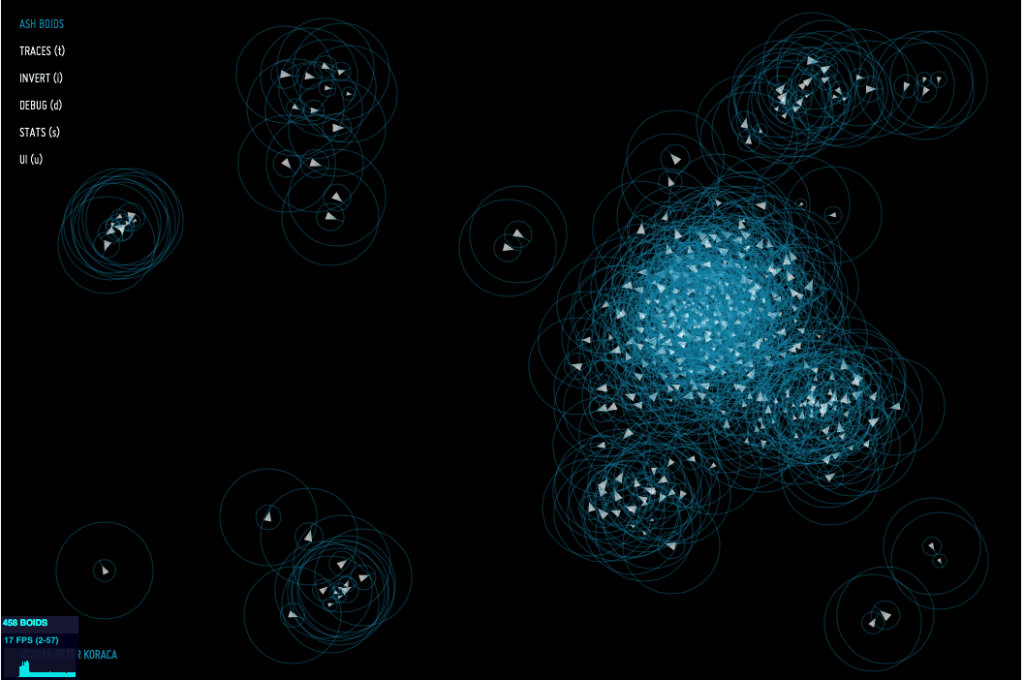 When I remove the “traces” and include only the “debug” features, beautiful blue circles appear and float majestically across the screen. Each “trace” leaves a ghost trail in its wake, becoming darker only when overlapping with other “traces.” 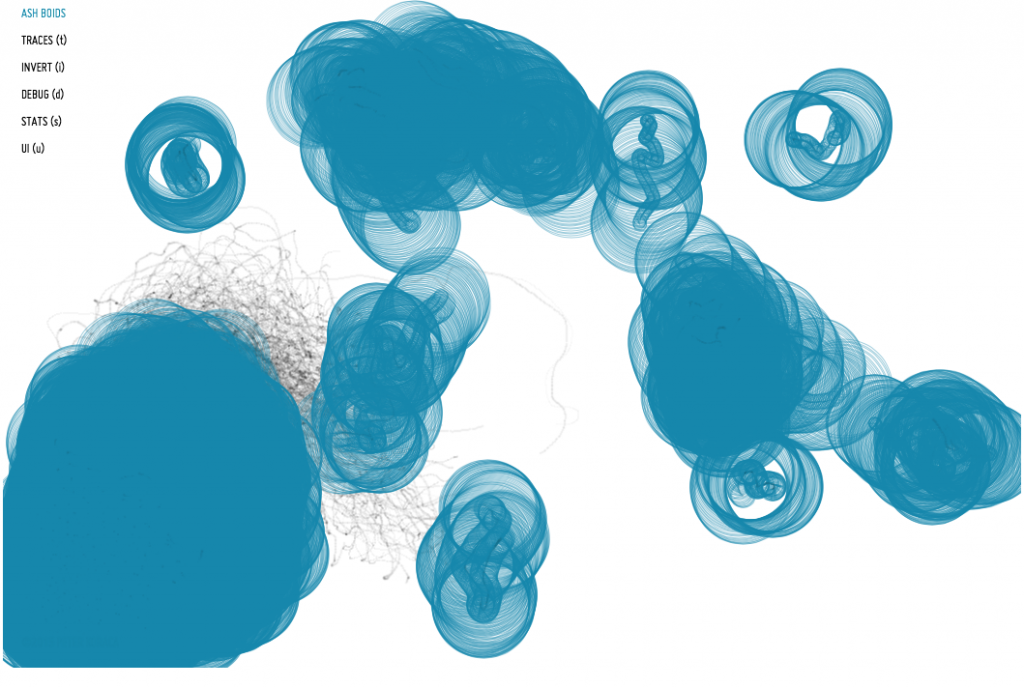 Finally, I left the “traces” feature untouched to allow the bird-like triangles to emerge. By clicking my mouse, I would drop large and small “boids” at random; watching their individual patterns appear. Between the chaotic scene, a semblance of order becomes visible as the “boids” travel together or split apart. 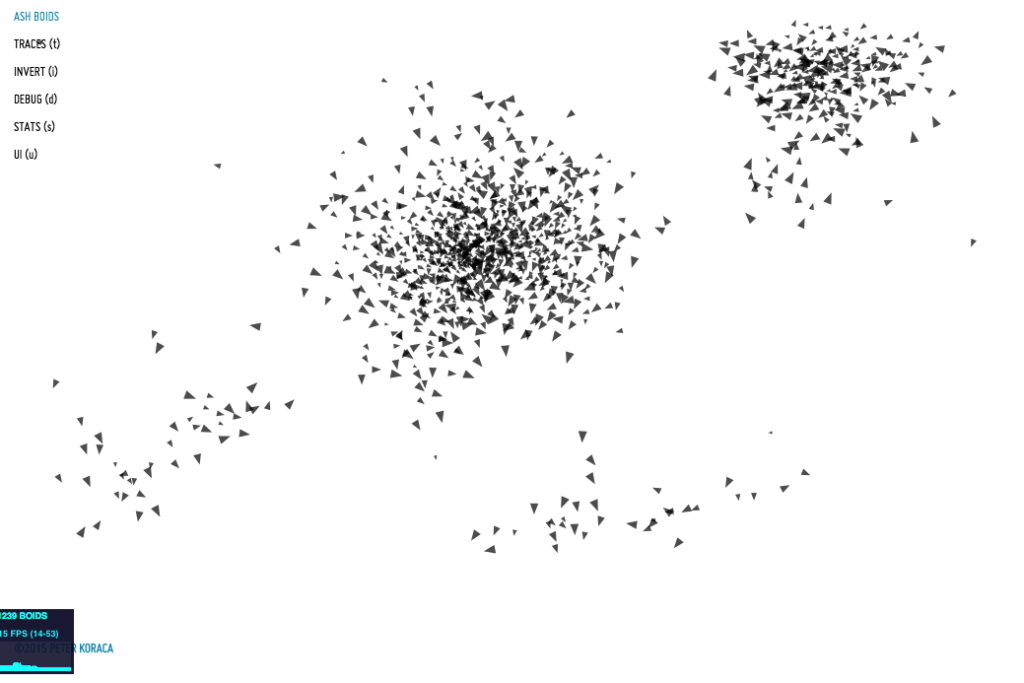