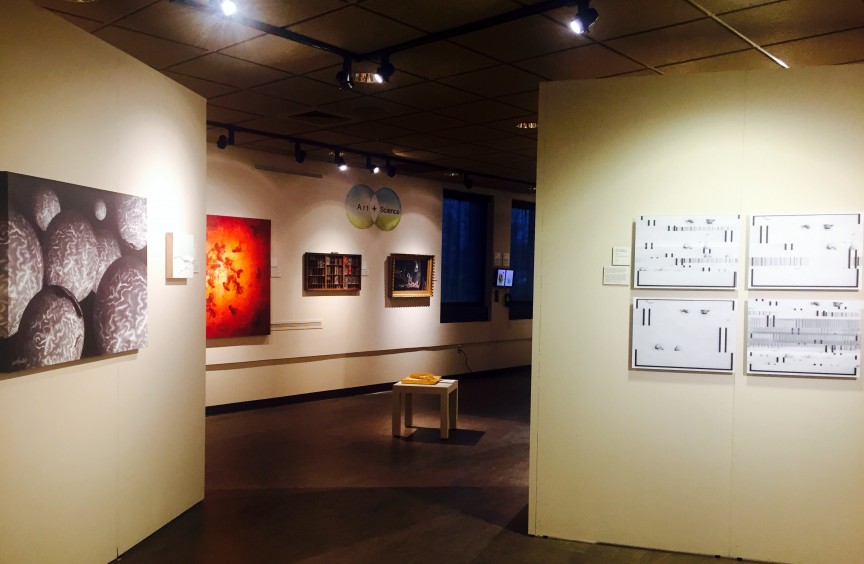 “I sought to include works that relate to the theme of art and science in ways that are original and multi-faceted. While the majority of submissions fit the theme in some way, the most distinguished pieces built on the long tradition of art and science working in concert by either saying something new about that intersection, exploring a specific aspect of science, or using scientific methodologies to create the work. Another set of criteria related to each artist’s discussion of their work. The strongest submissions were accompanied by a clear written explanation of how the work related to the theme of art and science. At the same time, the conceptual basis for the piece was evident in the work itself, rather than leaning heavily on the accompanying text. Other more pragmatic issues were also considered. For example, it was difficult to accommodate especially long video pieces or physical works that exceeded the maximum dimensions outlined in the call.” – Lily Simonson

Jane Chang Mi – The End of the Earth

“This generative animation is based off of iceberg tracking data over a twenty-year period from 1995-2015. The iceberg data was obtained from the NASA sponsored Scatterometer Climate Record Pathfinder at Brigham Young University, courtesy of David G. Long.”

“This print was constructed by graphically iterating a building block created from a photograph of the skeleton of a cholla cactus, with two smaller copies added in each iteration. The construction process was carried to the point where the details are vanishingly small.” 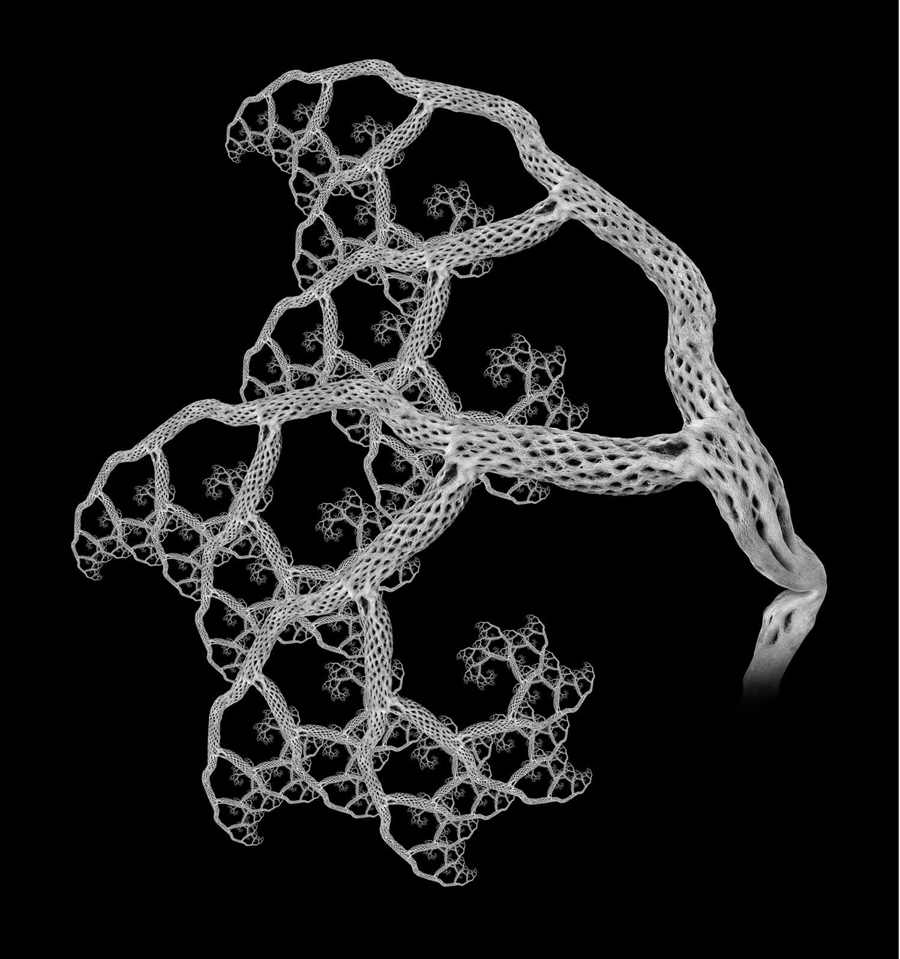 “My fractal artwork is presented as matted/framed photographs. This artwork is a Fractal Flame.” 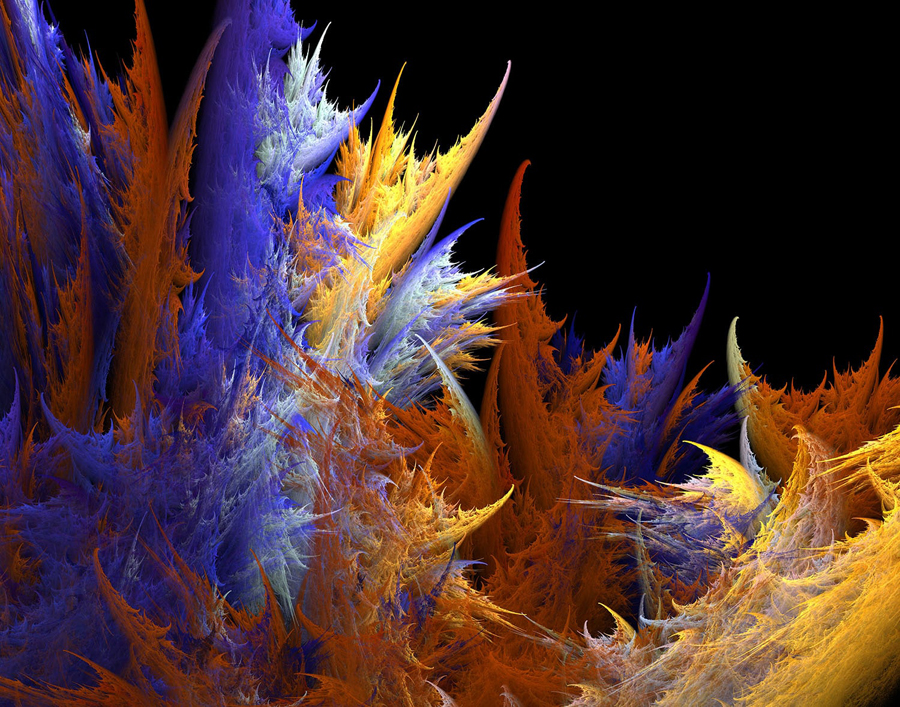 “I made this object by using data from a 1993 landmark experiment imaging single atoms that were pushed into a circular arrangement. The concentric circles are quantum mechanical matter waves.” 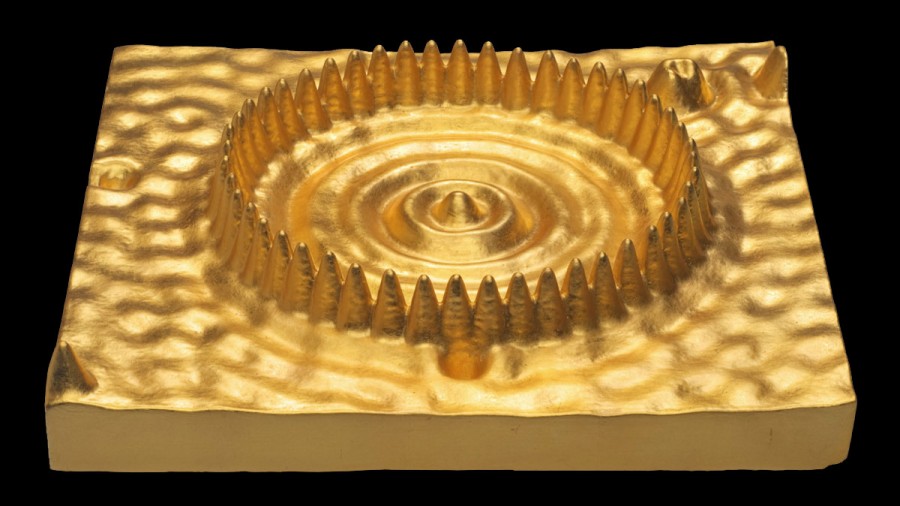 “Viewing this image, one immediately wonders about scale. Possibly micro or nano-scale is suggested. Or is it an aerial view of a large alien landscape? It is neither. Playing with various salt compounds and solutions, I created this strange environment.” 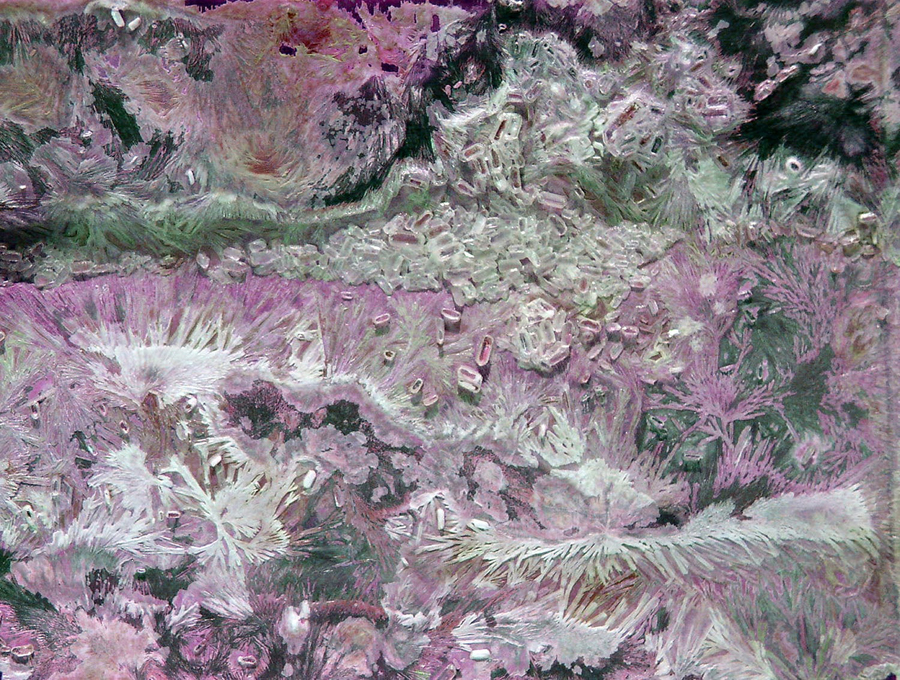 “This work is created with an underwater process where aluminum panel is treated and submerged in a water and powdered pigment solution, recording sedimentary patterns that are affected by time and temperature.” 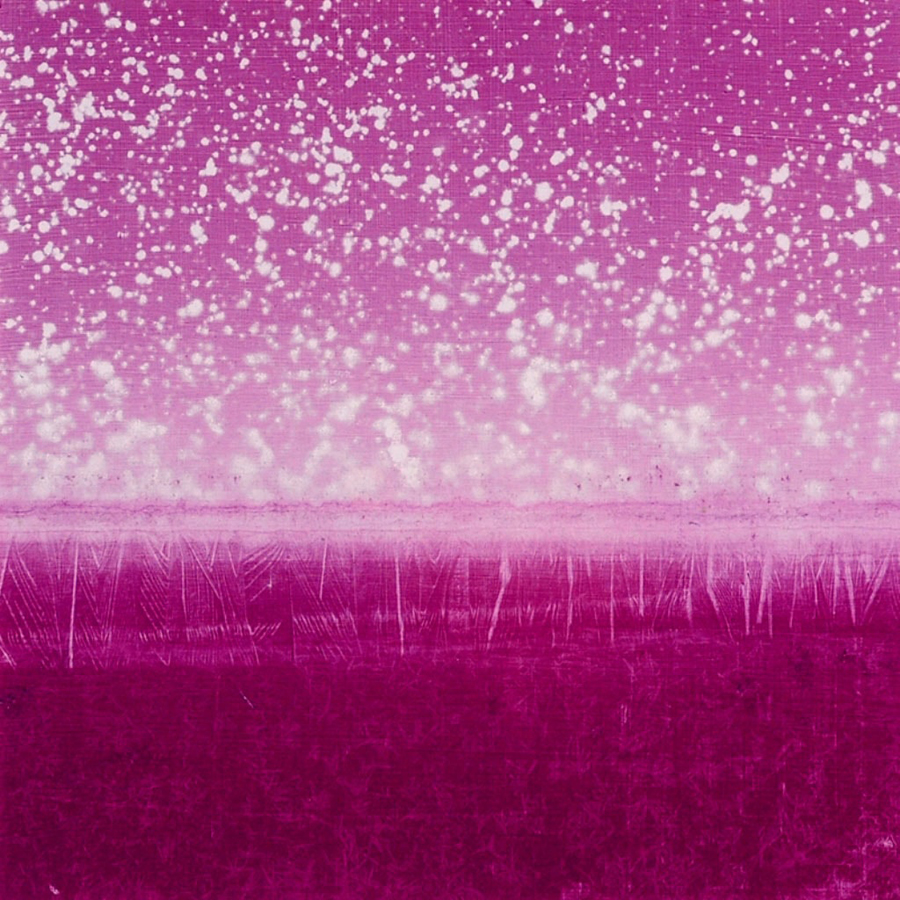 “It is a generative painting referenced by L-systems. It was developed by Aristid Lindenmayer, a Hungarian theoretical biologist and botanist. It describes the behavior of plant cells and to model the growth processes of plant development. It is inspired by traditional Korean painting characterized in transparency, beauty of space, and concentration of ink. It was referenced in L-system algorithm by Jer Thorp in Processing.” 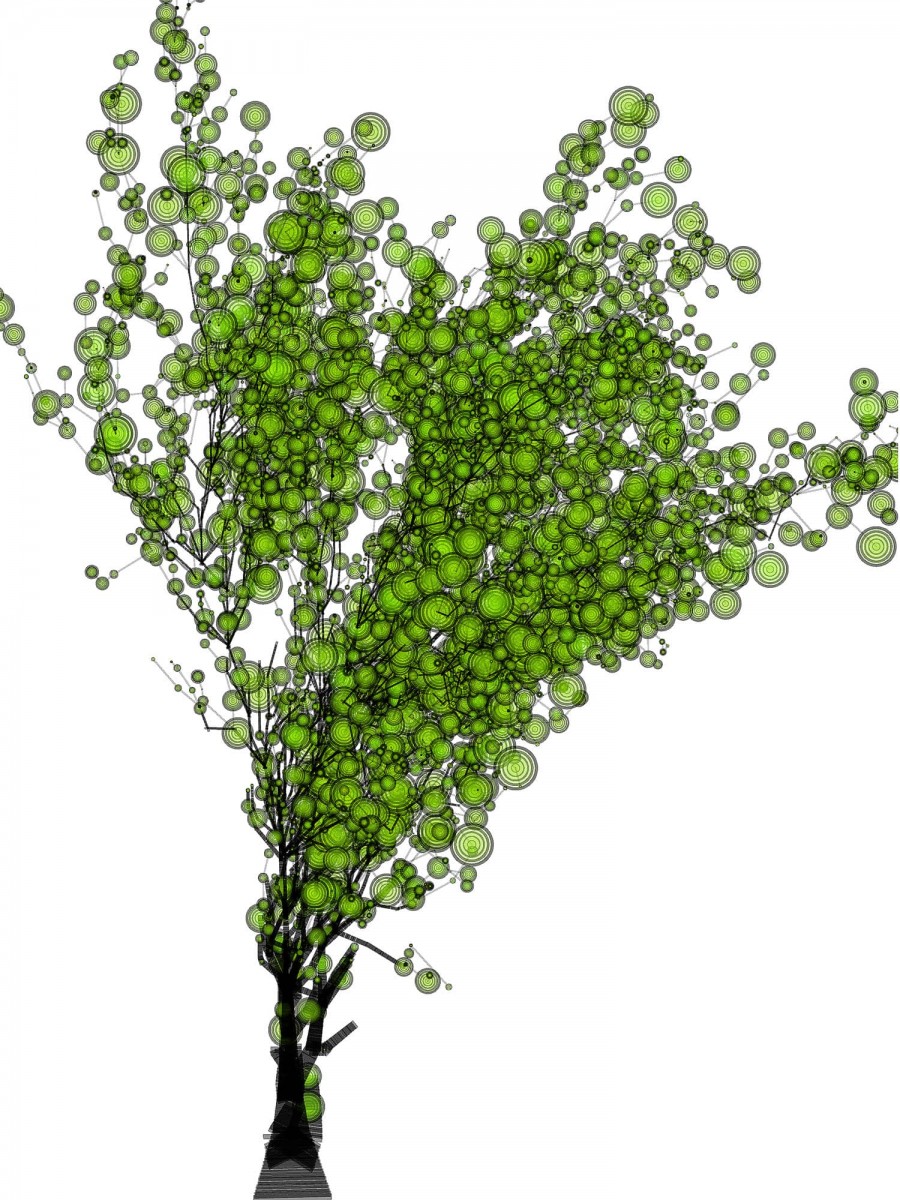 “Meiosis is one piece made from four separate images. The individual images are shown in a grid.” 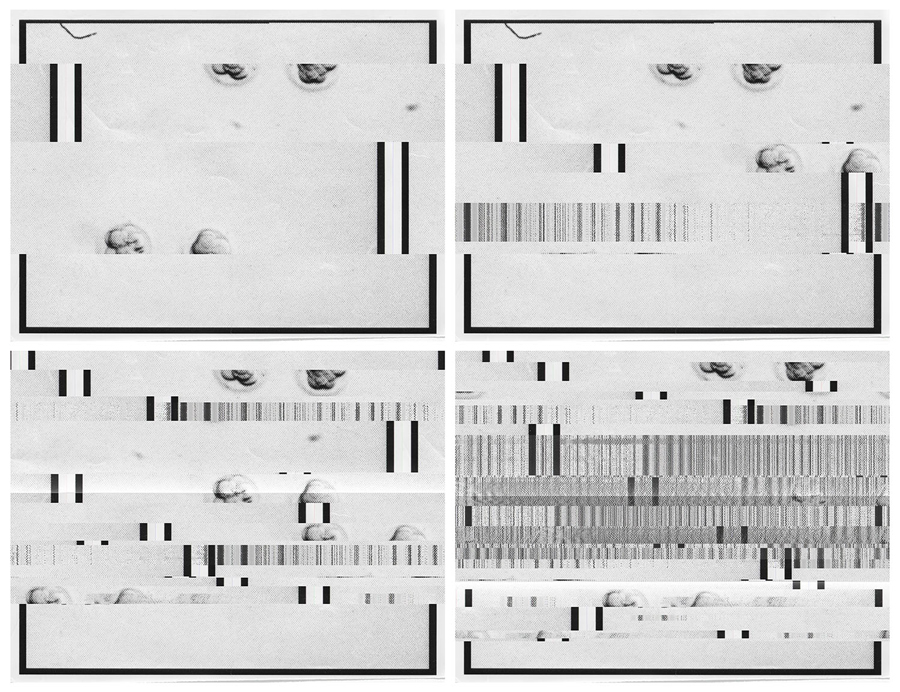