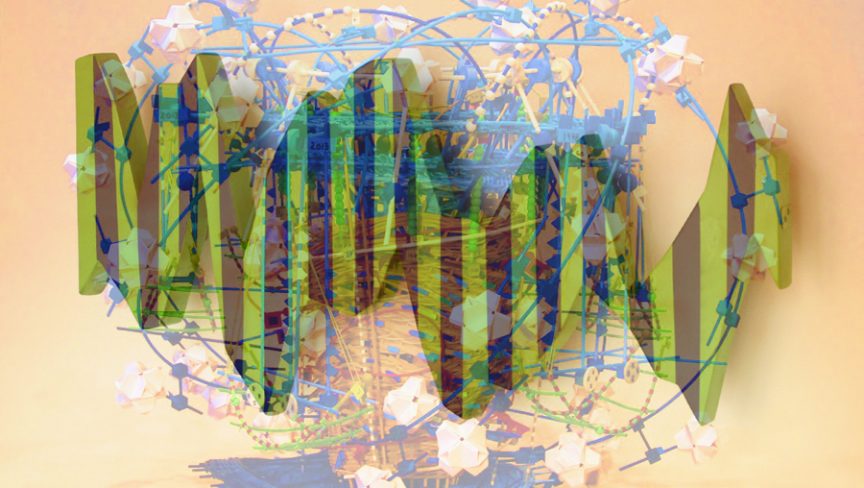 We’re capping off sciart weather week with a collection of inspiring projects!

In the sciart world, artists have the power to manipulate the weather, for instance, bring the elements indoors for our enjoyment. Drawing from meteorology and climatology data and themes, artists like Andrew James, Jill Pelto, Nathalie Miebach, Chris Klapper and Patrick Gallagher, and Leigh Sachwitz all experiment with the human experience of weather.

“Weather Report [below] focused on the high and low temperatures for St. Louis between Jan. 1, 2009 and December 31, 2011.  The past weather conditions determined the structure and shape for this body of work.  I transformed the existing daily Fahrenheit degrees from the intangible into visible units of measure and so doing translated the information into a physical experience.” – Andrew James 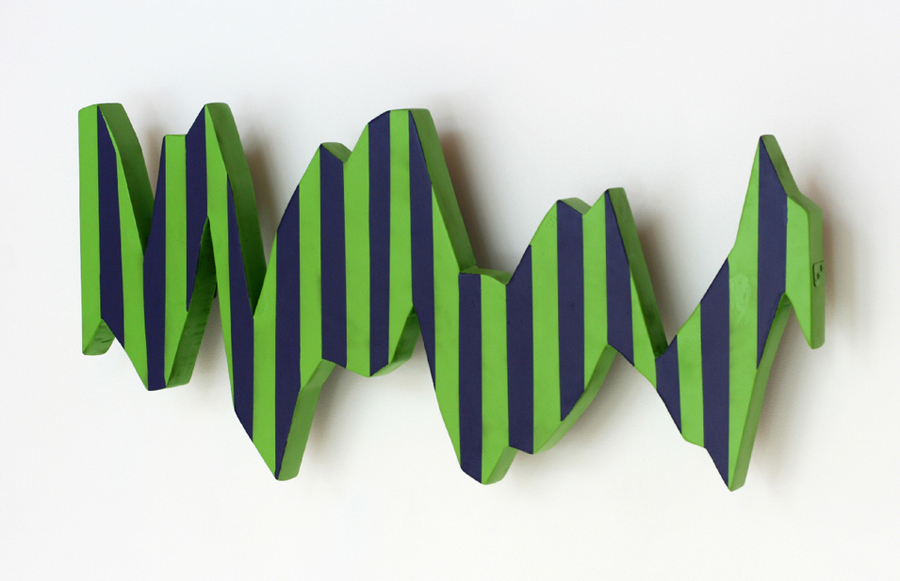 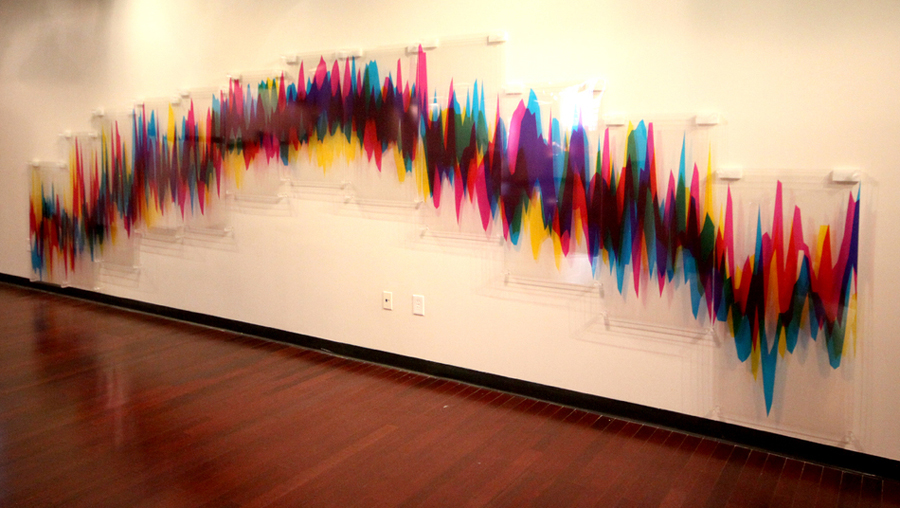 “Landscape of Change [below] uses data about sea level rise, glacier volume decline, increasing global temperatures, and the increasing use of fossil fuels. These data lines compose a landscape shaped by the changing climate, a world in which we are now living.” – Jill Pelto 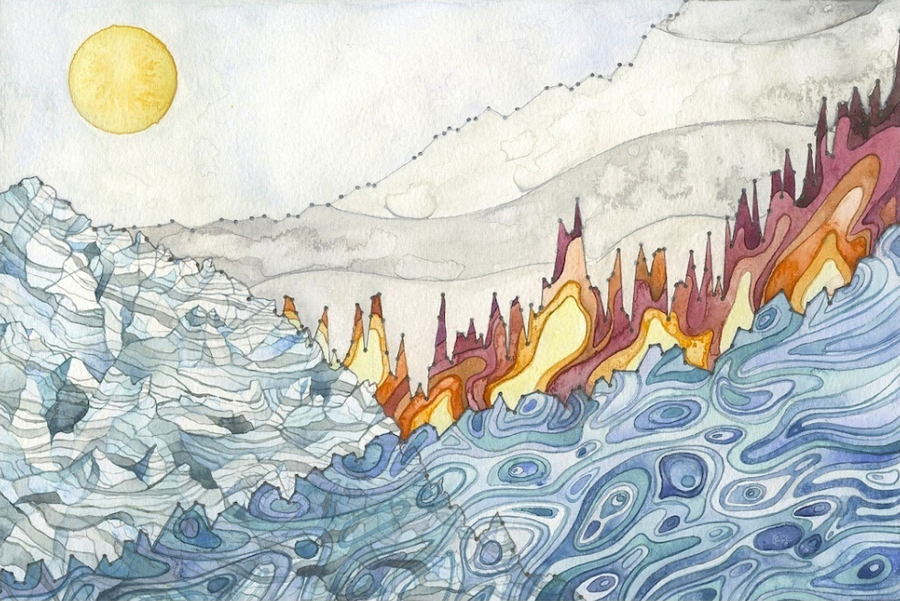 “Climate Change Data [below] uses multiple quantities: the annual decrease in global glacier mass balance, global sea level rise, and global temperature increase. I wanted to convey in an image how all of this data must be compared and linked together to figure out the fluctuations in Earth’s natural history. One of the reasons scientists study what happened in the past is to understand what may happen now as a result of human-induced climate change. I represented this by illustrating that glaciers are melting and calving, sea levels are risings, and temperatures are increasing. The numbers on the left y-axis depict quantities of glacial melt and sea level rise, and the suns across the horizon contain numbers that represent the global increase in temperature, coinciding with the timeline on the lower x-axis.” – Jill Pelto 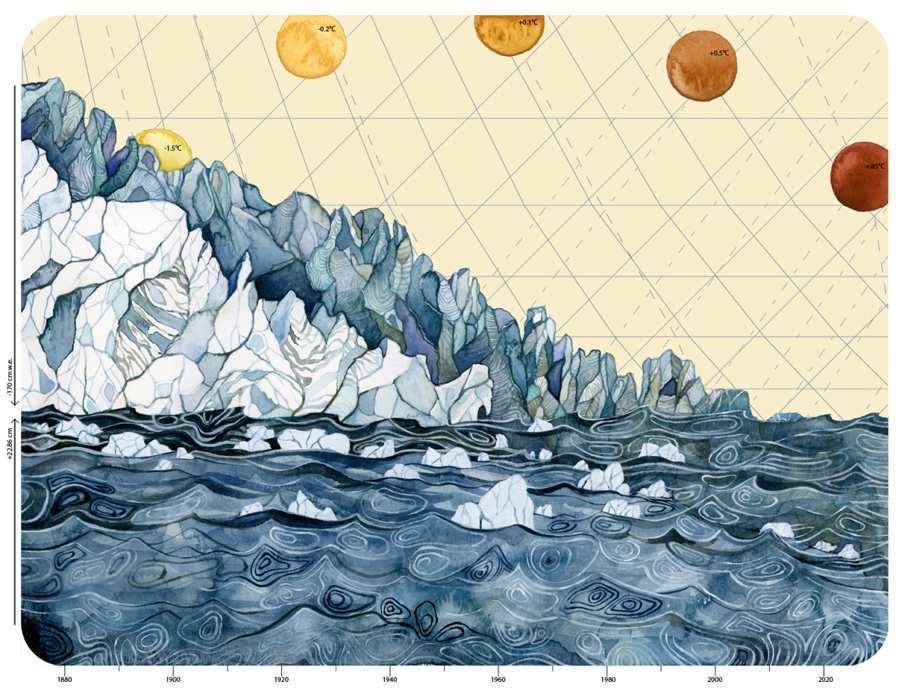 “The Blizzard of 78 has remained a measurement pole against which all Nor’easter storms are compared to. Every time a bad one hits New England, the memories of the Blizzard of  78 are awoken. The Blizzard of 2013 shared some eerie similarities with the Blizzard of 78 – similar wind strengths, high waves, and a development of an eye in the center of the storm.  The piece [below] translates wind, temperature and snow data from both storms.” – Natalie Miebach 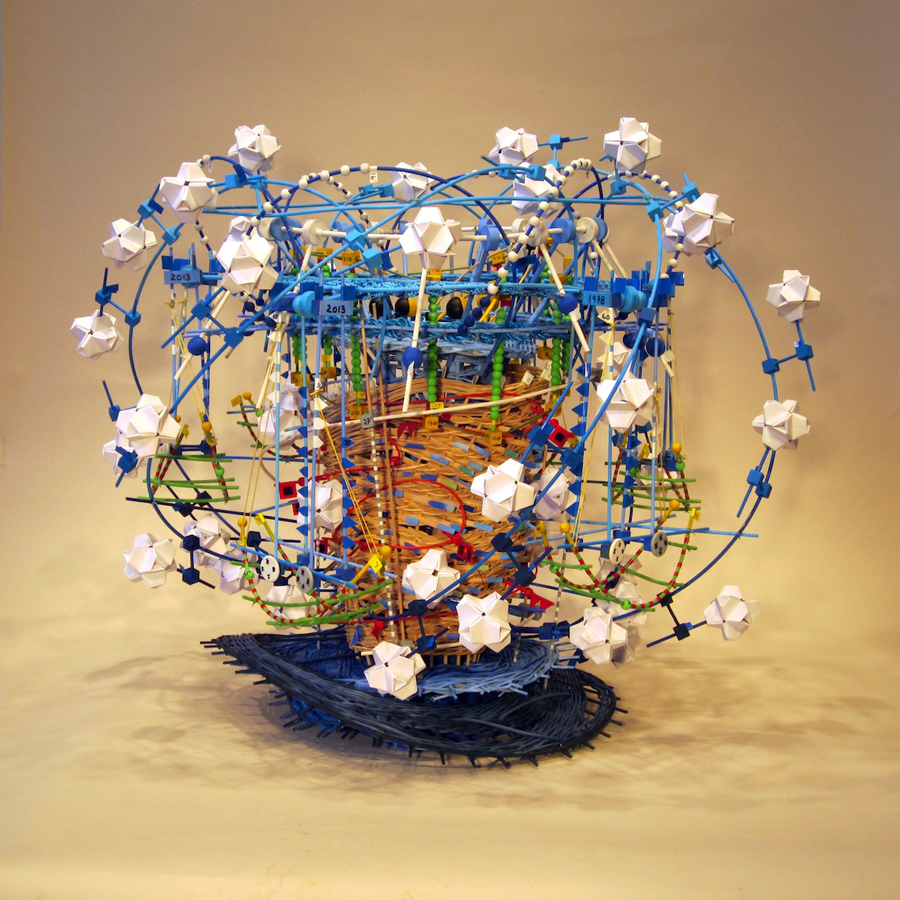 “In late October, a complex systems of storms known as “The Perfect Storm” led to the sinking of the Andrea Gail, a fishing vessel from Gloucester, MA.  While it was never known where exactly it sank, she is believed to have gone missing near  Sable Island, known as the graveyard of the Atlantic. The piece [below] translates wind data from St. John’s, Sable Island and Gloucester during the fateful night of Oct 28 th, 1991.” – Nathalie Miebach 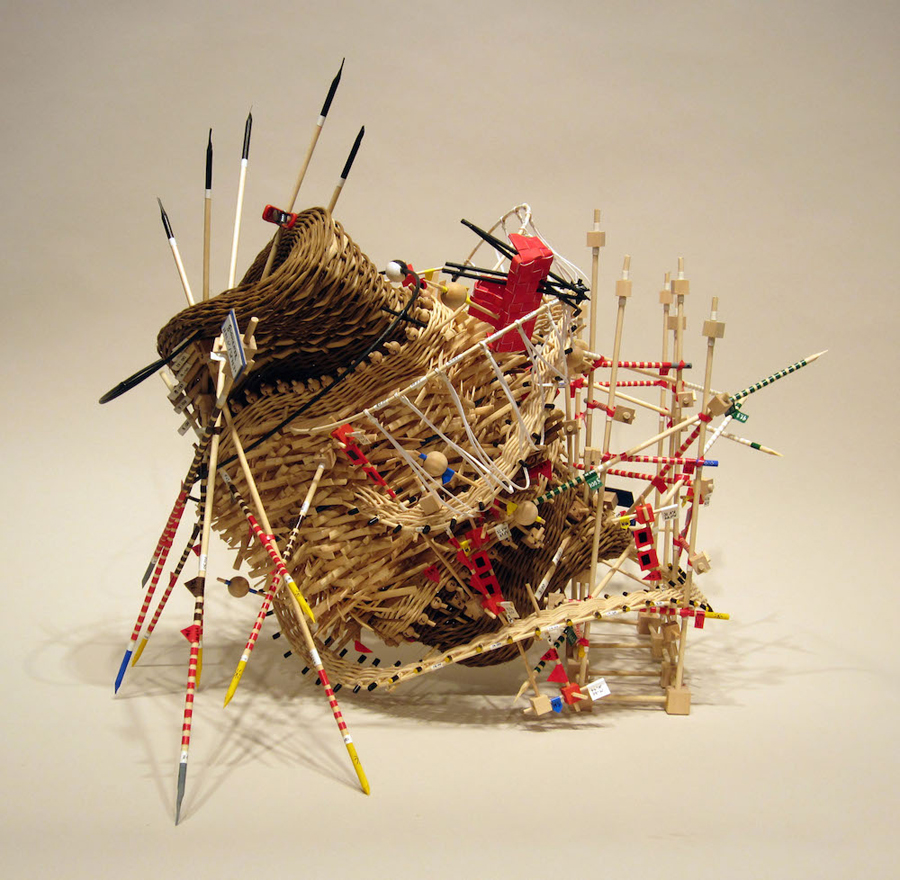 “Symphony in D Minor [below] is an interactive sound and video installation on an epic scale.  A thunderstorm contained within a series of large hand cast resin sculptures, each individual form is a unique instrument hanging from the ceiling. Suspended just within reach and activated by touch, the viewer sets the symphony in motion by pushing the forms through the air to trigger the various sound elements of the storm. Sensors relay individual recordings of thunder, lightning, wind and rain with alternating intensities to a full-scale sound system. Acting as both conductor and musician, the viewer creates an evolving composition out of atmospheric sounds, forging an environment that envelops the audience. Like giant illuminated pendulums each sculpture radiates video projections that in their dormant state display abstractions of water droplets and slow moving clouds.  As the sensors detect movement different ranges initiate more visual elements of the storm.   Once activated, the form then shifts to a swirling torrent of clouds.” – Chris Klapper 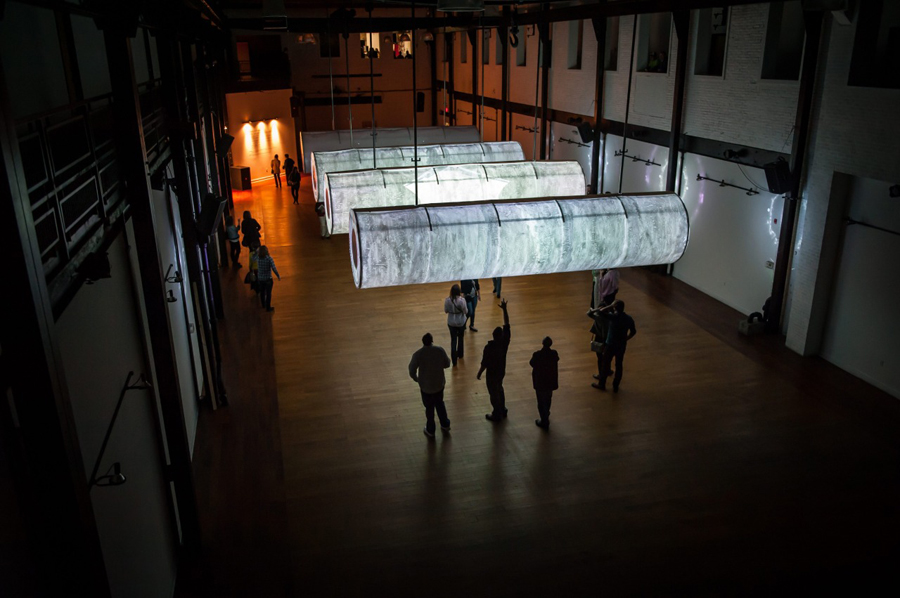 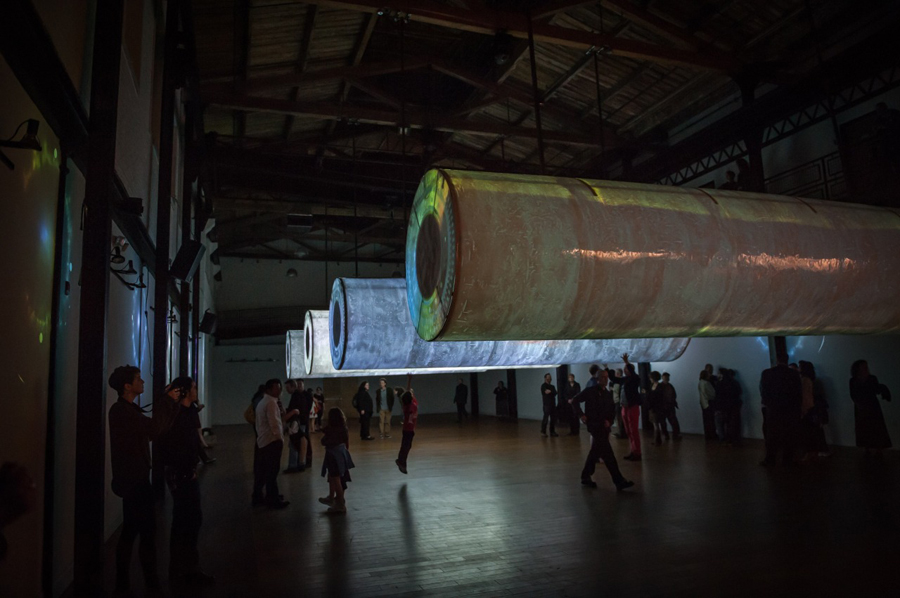 ‘SYMPHONY in D MINOR’ from Patrick Gallagher on Vimeo.

“The house as our sanctuary, a safe haven to hide from nature’s forces. Leigh Sachwitz invites you to experience the rain drumming hard on the roof, watching through the window seeing dark clouds stacking up in the night sky. As the protecting walls disappear into the moonlight and the thunderstorm reaches its climax we feel naked – but purified by the light.” – INSIDEOUT