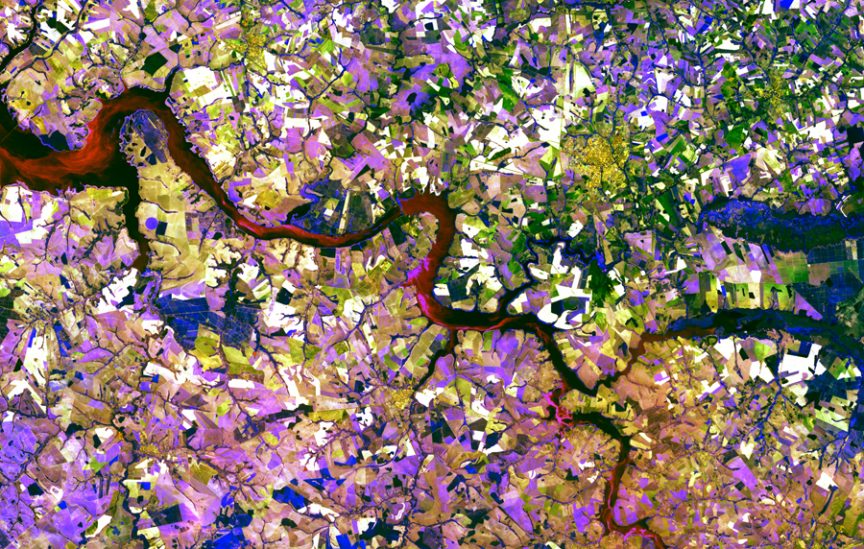 Since 1879, the U.S. Geological Survey (USGS) has provided scientific information about natural hazards that threaten our environments. Surveying water, energy, minerals, and other natural resources, USGS monitors the health of our ecosystems and the environment, while paying particular attention to the impacts of climate and land-use change. With a team of scientists, the USGS works to develop tools and methods to study the earth and all its processes.

“Earth as Art 4 (EAA4) comprises 37 stunning images captured by Landsat 8, the newest Landsat Program satellite. Landsat satellites acquire detailed views of the Earth’s surface that scientists use to determine how our planet’s landscapes are changing over time. In addition to their scientific value, however, many Landsat images are simply lovely to look at.” – The U.S. Geological Survey.

Check out some of our favourites from EAA4 below: 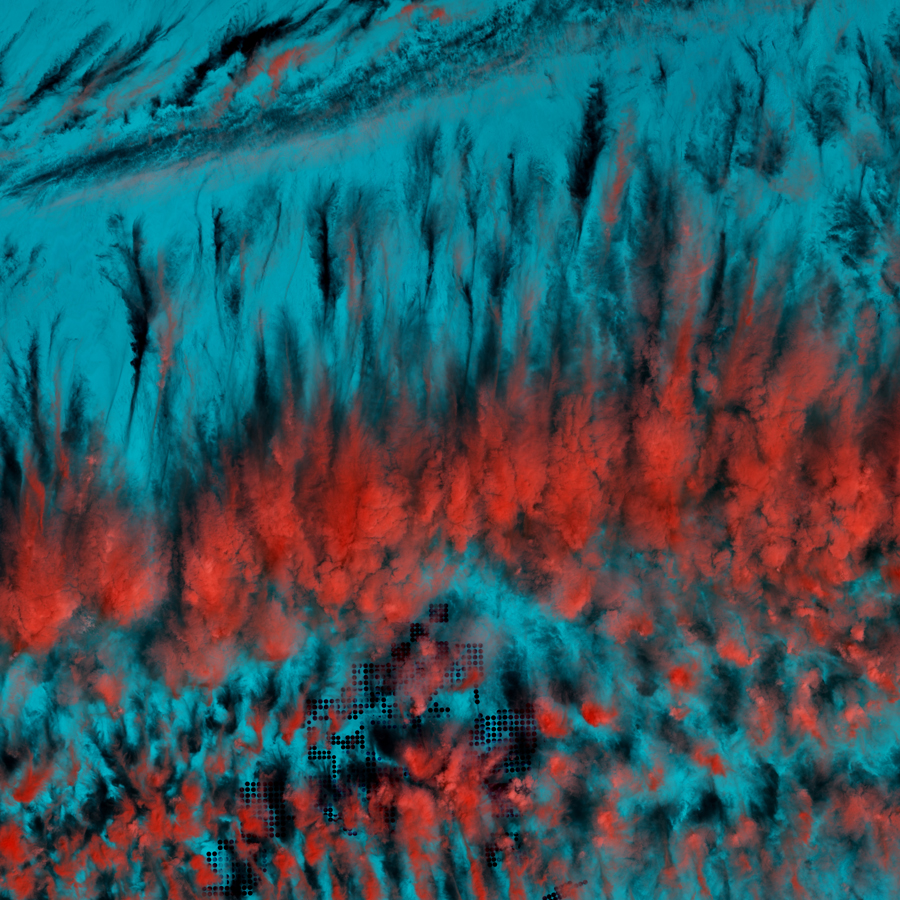 Eerie Cloud Shadows: These cloud patterns cast eerie shadows on the landscape of southern Egypt. The clouds appear red and the desert below hazy blue in this infrared rendition. 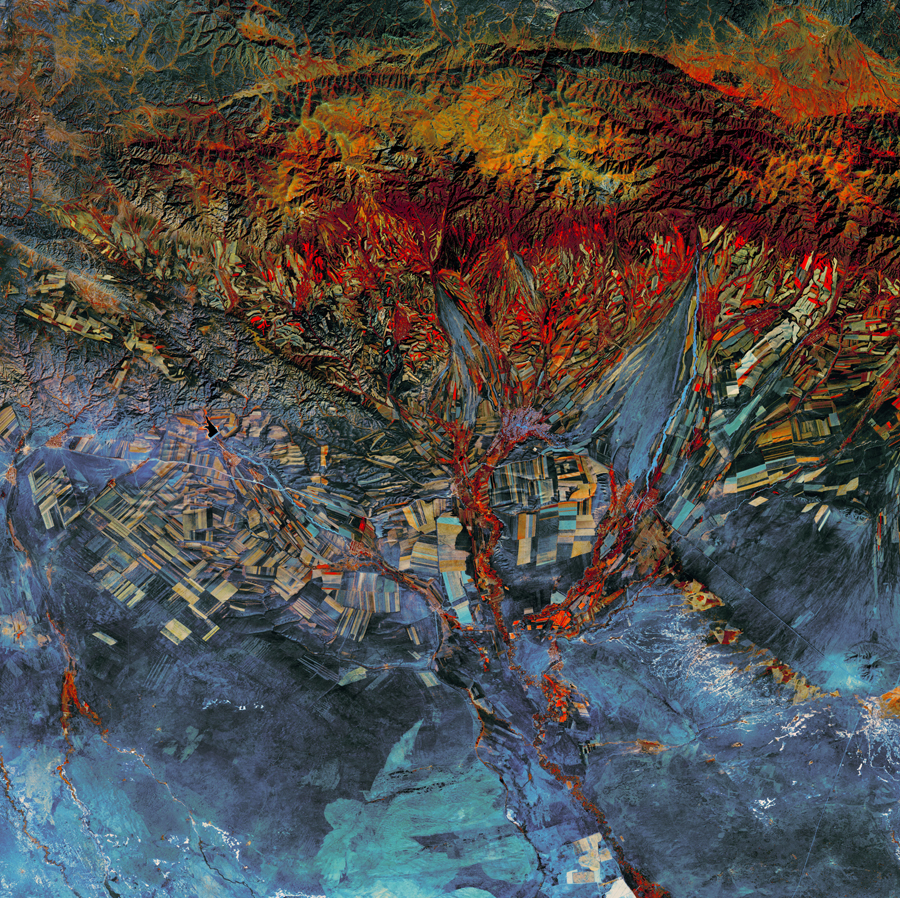 Cubism—Landsat Style: Startling red patches sprout from an agricultural landscape that looks almost like a Cubist painting. The fields in this part of eastern Kazakhstan follow the contours of the land—long and narrow in mountain valleys, and large and rectangular over the plains. 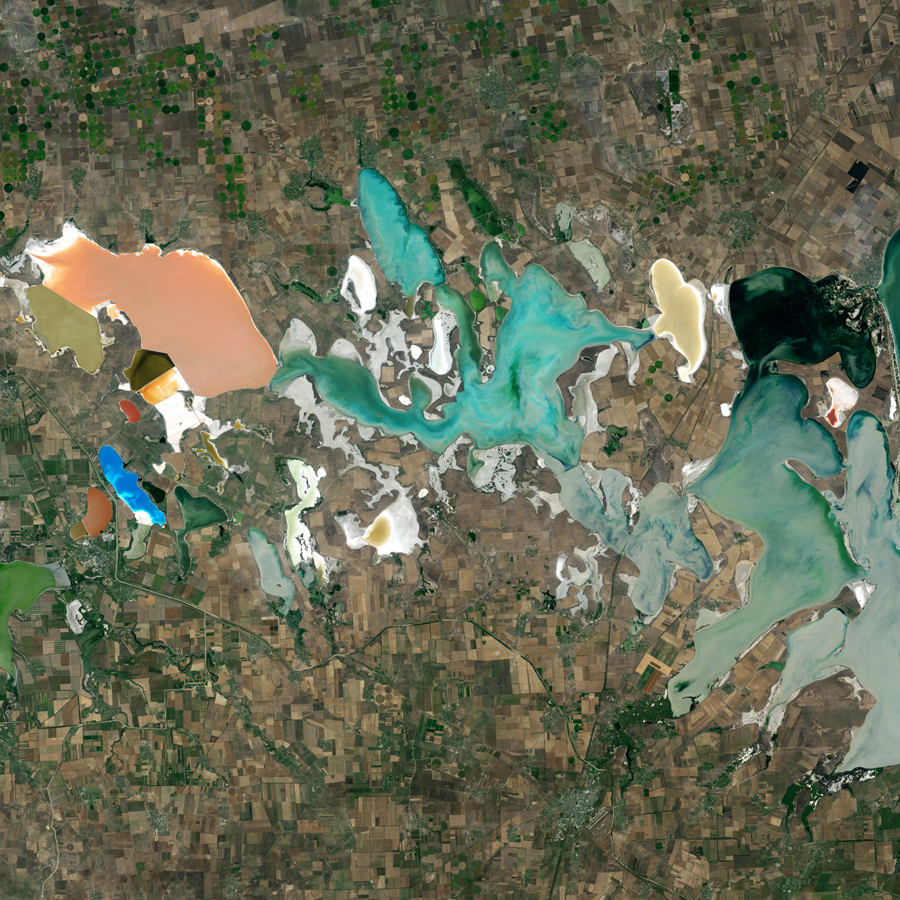 Putrid Sea: Varied types of microalgae flourish in this colorful network of shallow, salty lagoons at the neck of the Crimean Peninsula between the Black Sea and the Sea of Azov. This natural color image portrays the unnaturally strange colors of the area known as Sivash, which is nicknamed the “putrid sea” because the algae in some of the lagoons produce a rotten smell. 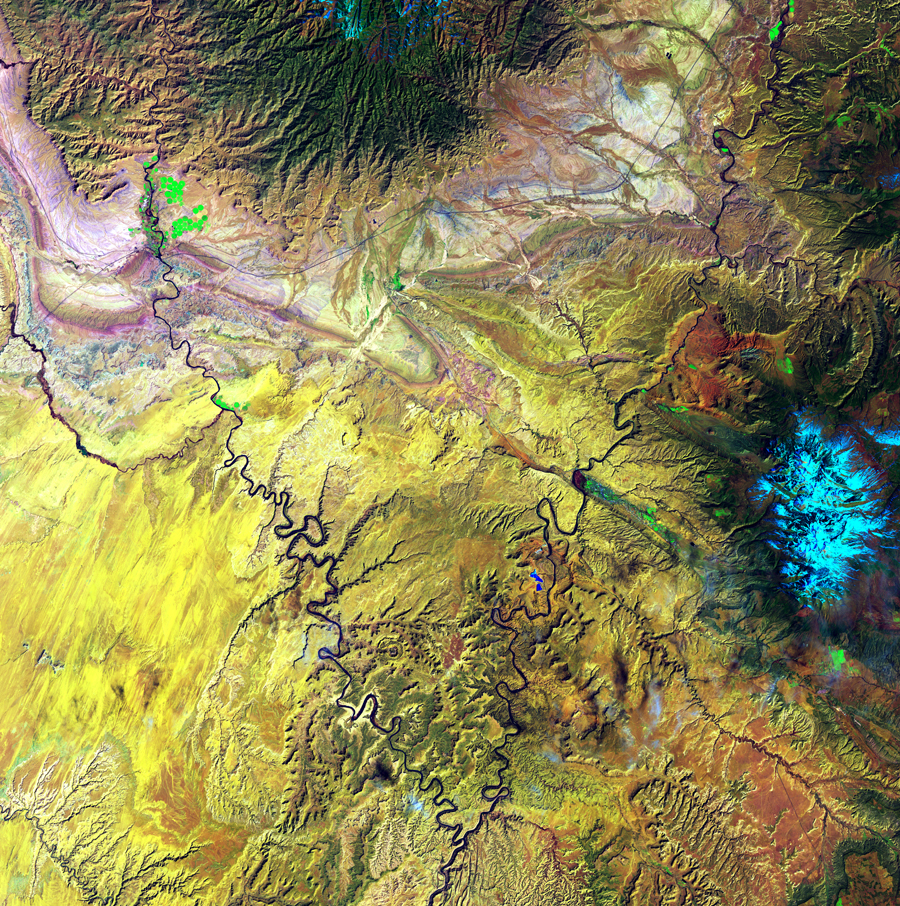 Canyonlands: The Green River and the Colorado River meet within Canyonlands National Park in Utah. Snow-covered Mount Waas, shown in light blue on the right side of the image, overlooks the arches, canyons, and bizarre rock formations that prevail throughout this region. 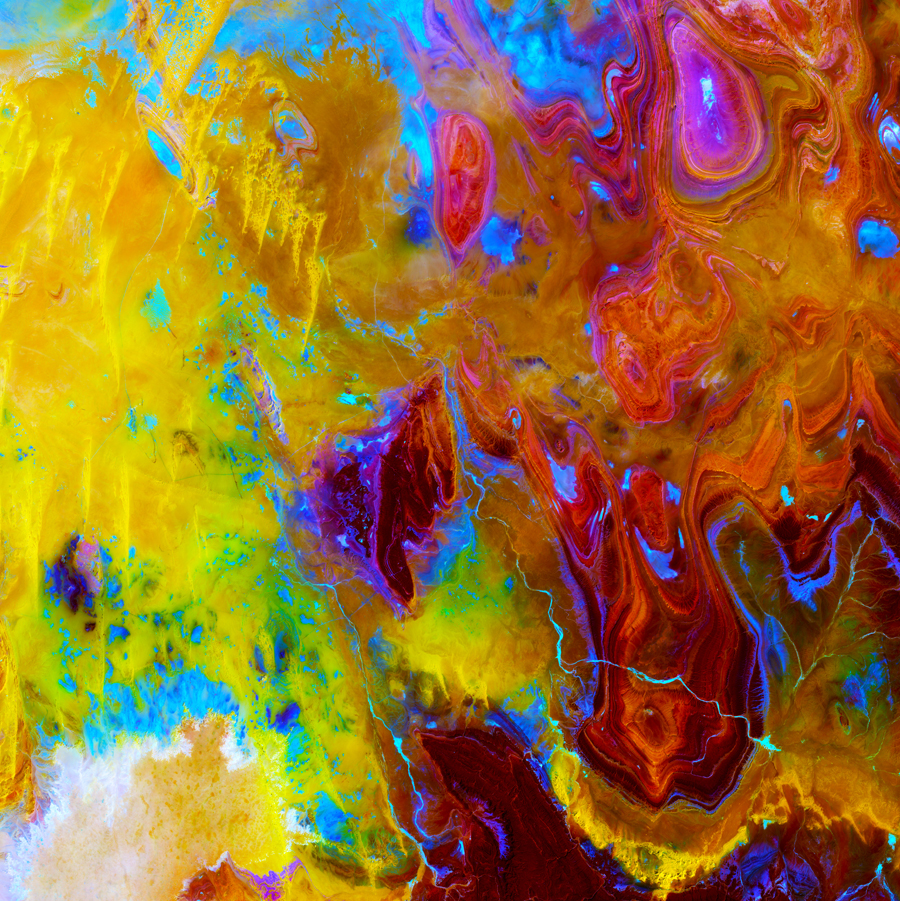 Land of Terror: No water. No vegetation. No oases. Known as the “Land of Terror,” the Tanezrouft Basin in Algeria is one of the most desolate parts of the Sahara Desert. Sand dunes, which appear in yellow, streak down the left side of the image, and sandstone formations carved by relentless wind erosion make concentric loops, much like the grain seen in a piece of wood. 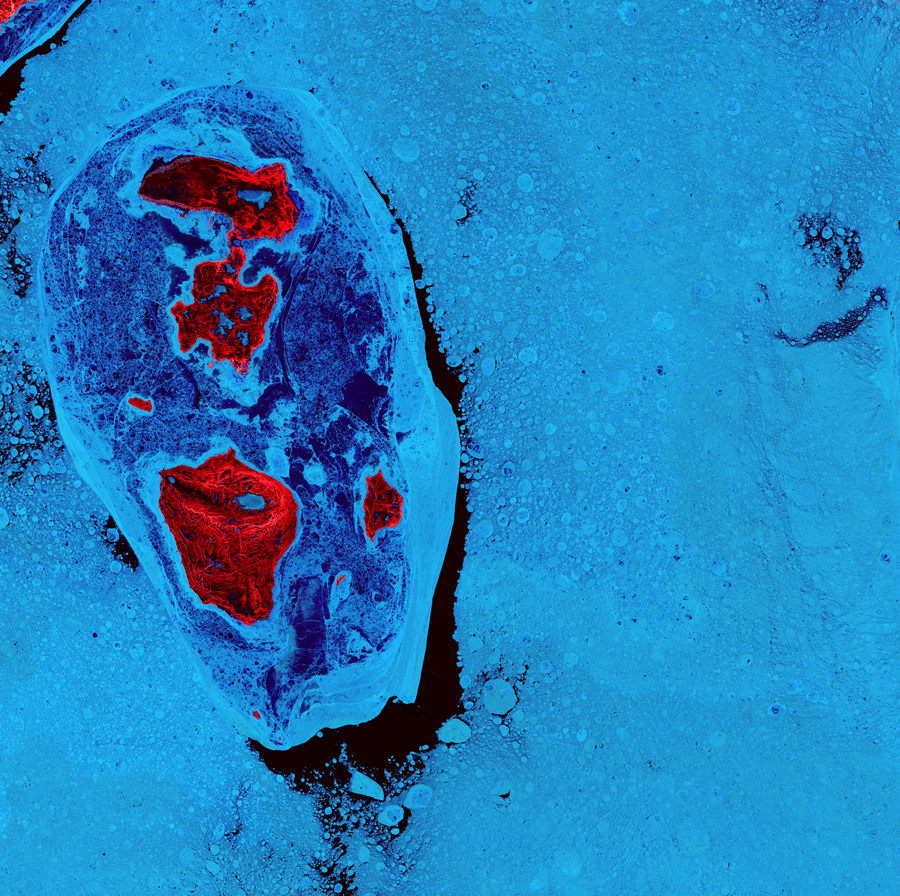 Cellular Ice: The ice surrounding the northern Canadian Spicer Islands, shown in bright red, resembles a cell, complete with ribosomes, mitochondria, and a nucleus. Even though the image was captured shortly after the first day of summer in the Northern Hemisphere, the islands are locked in ice. 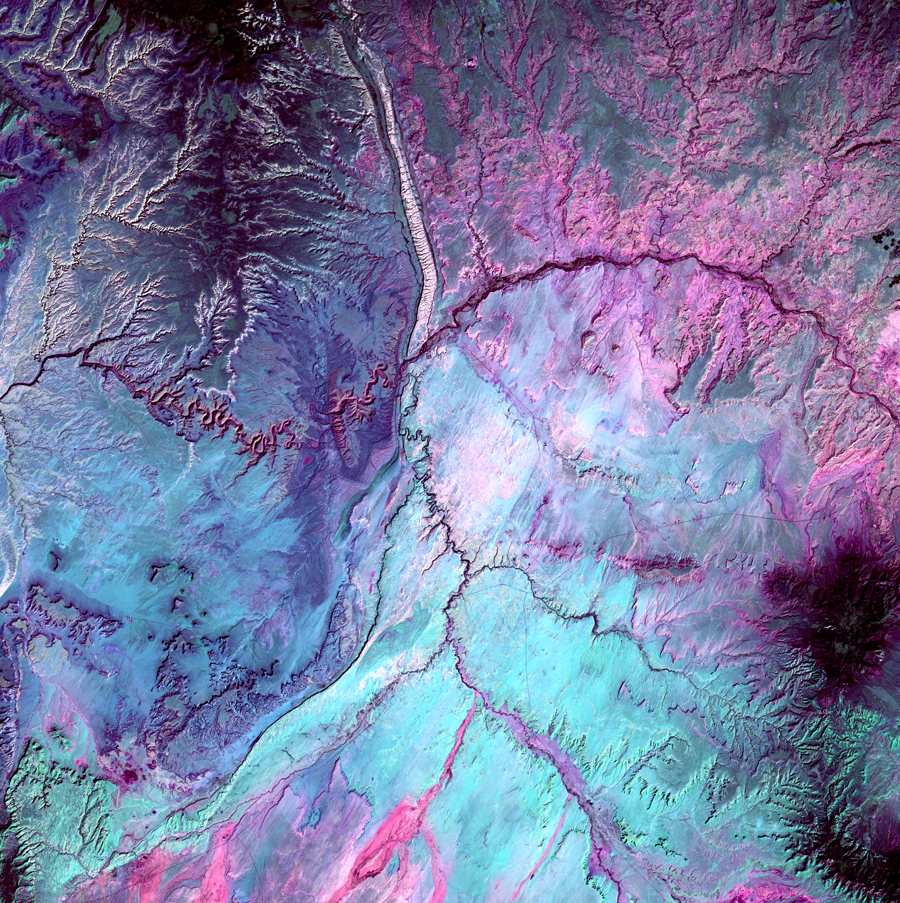 Cloud Lightning: What looks like lightning arcing through an ominous cloud is actually a dry landscape of rocky buttes in southern Utah and northeastern Arizona. River channels flow north from Arizona into the San Juan River. The light vertical feature at the top of the image is referred to as Comb Ridge, a jagged fold in the Earth’s crust called a monocline. 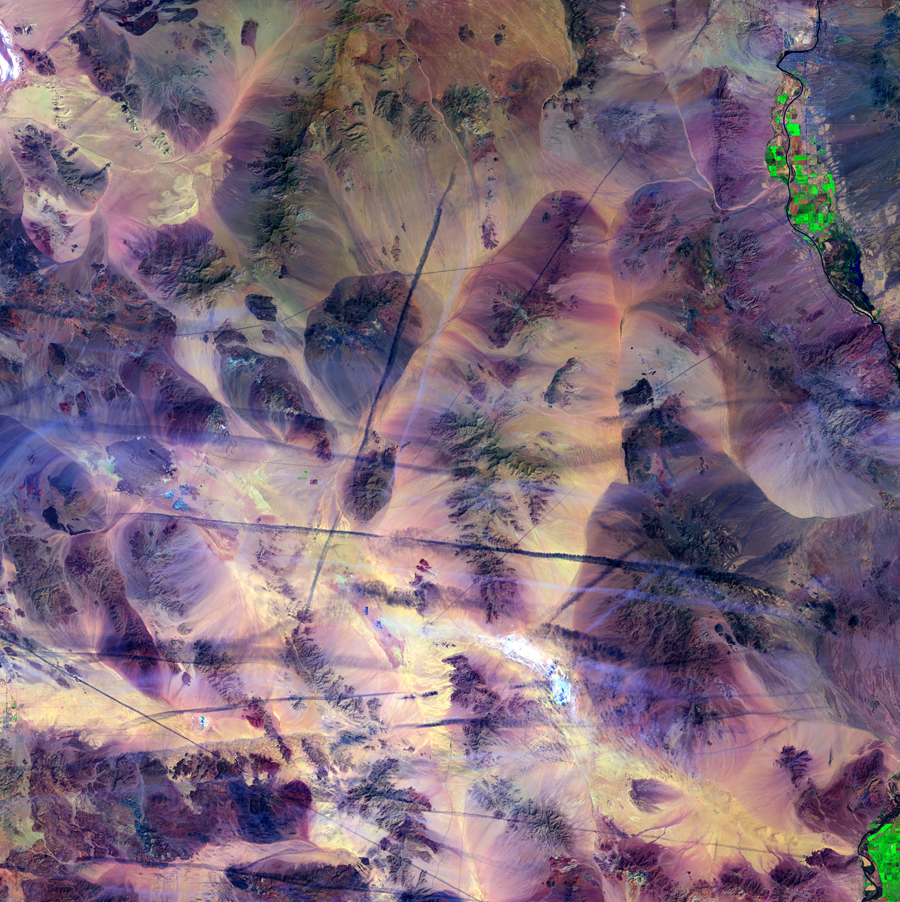 Contrails: Like scratches on a marble table, airplane contrails cut across the southern California Mojave Desert. The shadows from the contrails cast dark lines across the ground. Contrails form when cold, dry air mixes with warmer aircraft exhaust. Mountains and a few dry lakebeds provide a backdrop to this scene, along with bright green spots of agriculture along the Colorado River. 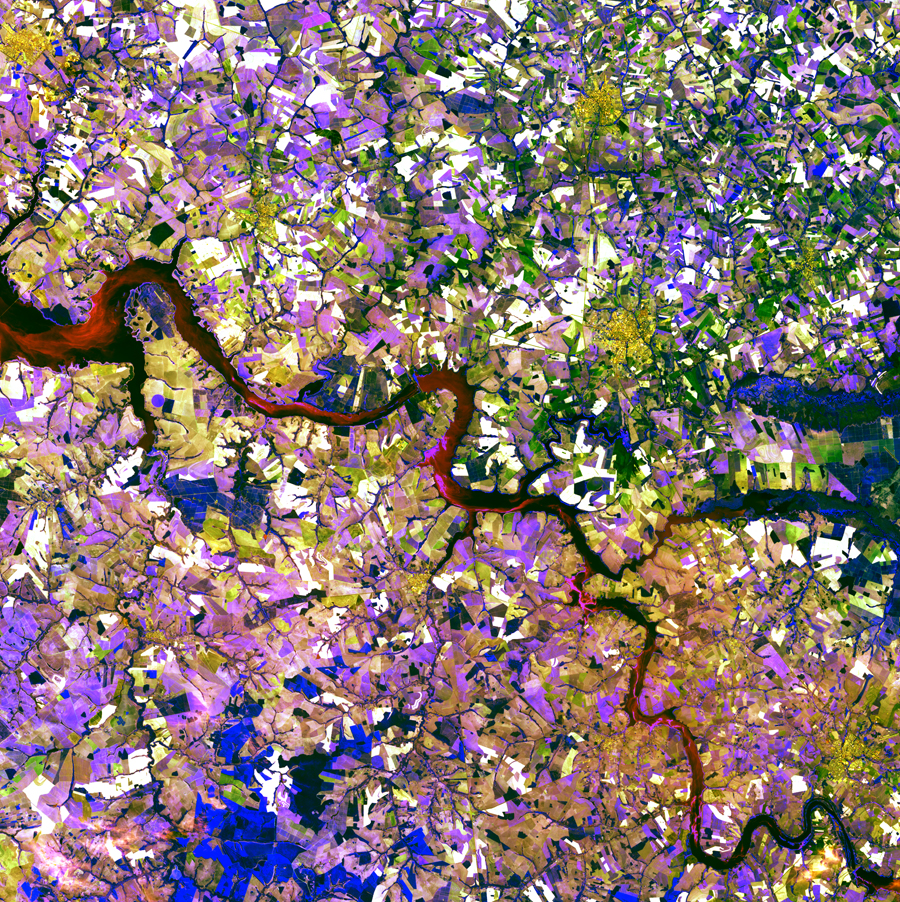 Tessera Mosaic: The Tietê River snakes across this tessera mosaic of multicolored shapes near Ibitinga, Brazil. Fields of sugarcane, peanuts, and corn vary in their stages of development. Lavender, purple, and bright blue indicate actively growing crops. Light yellow or white indicate little or no vegetation growth. The splotches of dark mustard yellow are urban areas. 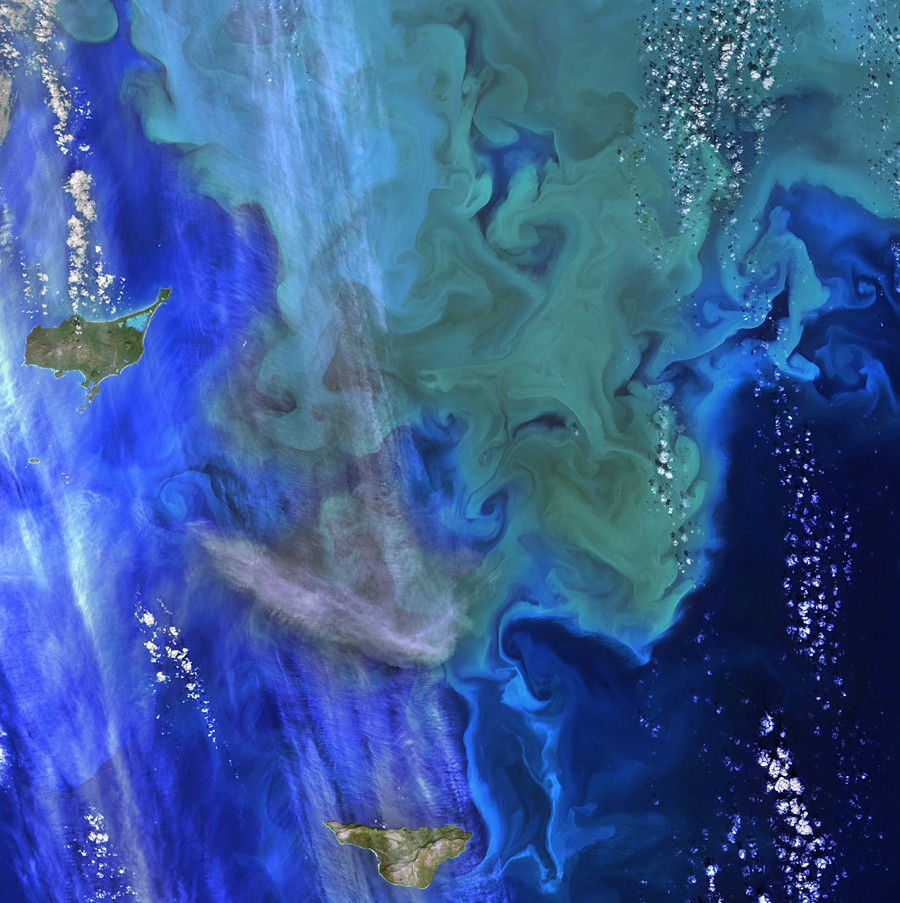 Earth’s Aquarium: These green and blue swirls in the Bering Sea reveal the bottom of the food chain in the ocean. Microscopic organisms called phytoplankton, which are important to fish populations, may be too small to be seen individually, but in vast numbers they are visible from space. The white clouds in the image look like bubbles in an aquarium. 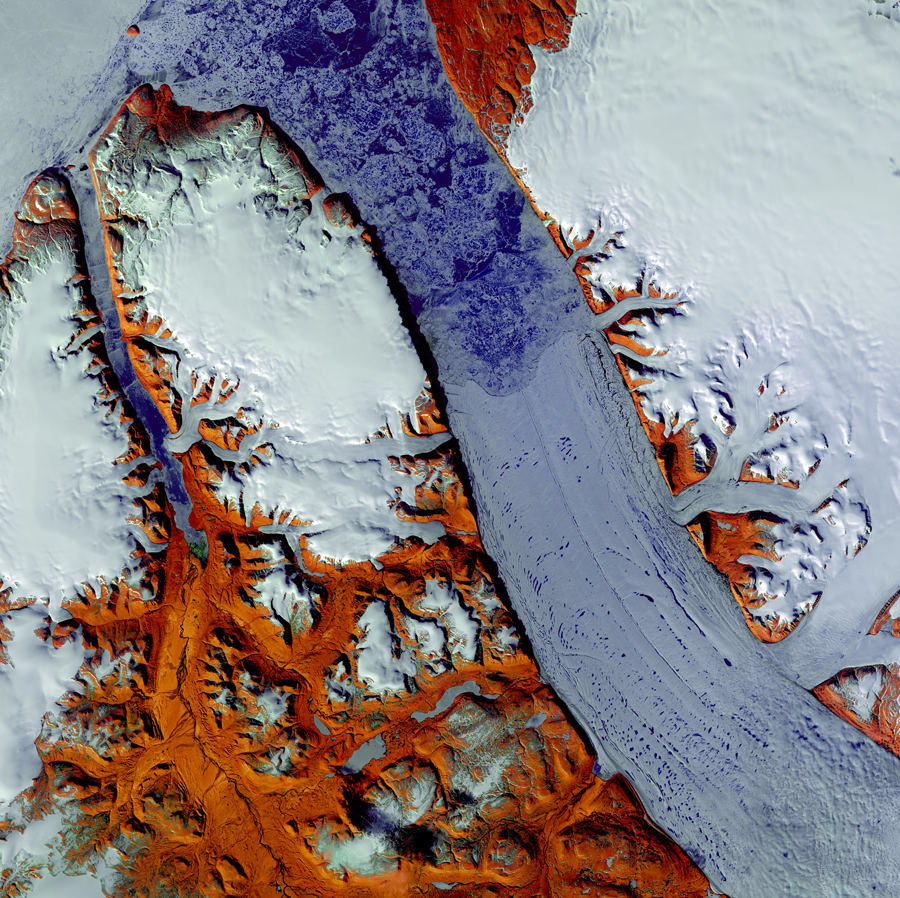 Petermann Glacier: Located on the northwestern coast of Greenland, Petermann Glacier covers 1,295 square kilometers (500 square miles). The glacier’s floating tongue of ice extends from the lower right corner of the image toward the top center. At 15–20 kilometers (9–12 miles) wide and 70 kilometers (43 miles) long, it is the longest floating glacier in the Northern Hemisphere. Infrared wavelengths reveal bare ground shown in red-brown tones in this summer image. 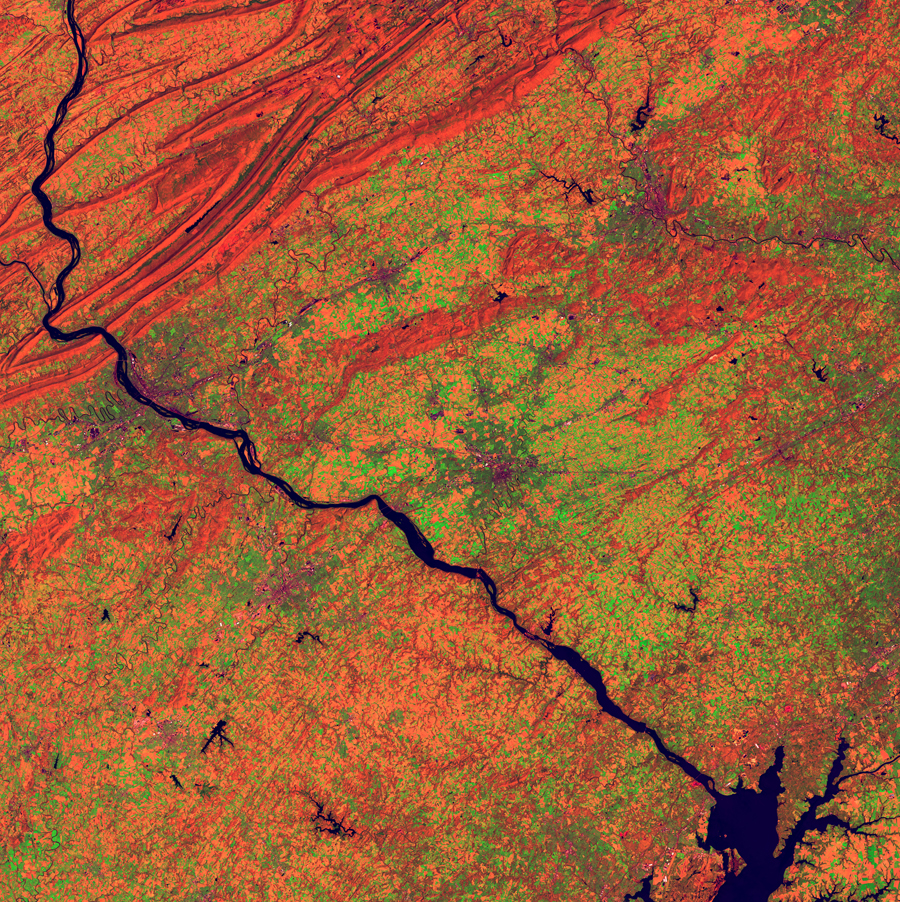 River and Ridge: The Susquehanna River appears as a dark line coursing through this scene in southeastern Pennsylvania. The cities of York, Lancaster, and Reading lie among agricultural lands. The State capital, Harrisburg, is positioned against the orange folds in the upper left of the image, along the edge of the Appalachian Mountain Ridge and Valley Province. 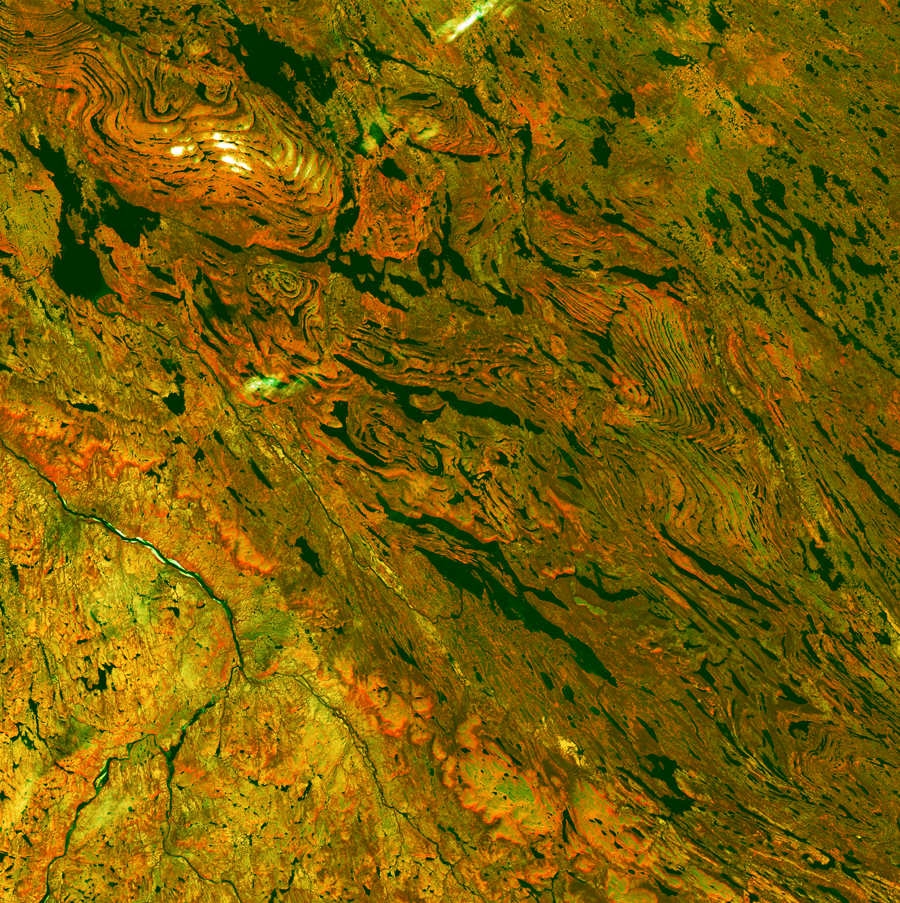 Rock Folding: This Landsat image shows how glaciers scoured the landscape, gouging out depressions that formed linear lakes. The glaciers also exposed the complex folded rock layers that form the Labrador Trough of Quebec in Canada. Glacial action is evident in the fingerprint-like patterns.