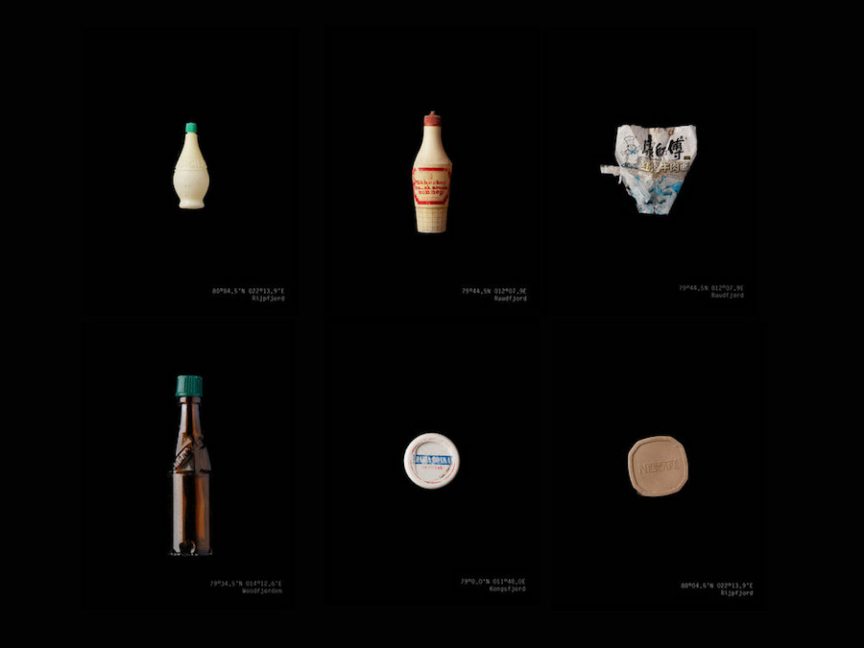 Carol Devine is a writer, researcher, humanitarian, and a creator. While travelling on an expedition to clean up plastic pollution at the North Pole in 2015, Devine turned the experience into a sciart exhibition. Aqua Mess: Portraits of Garbage at the Top of the World explores the synthetic footprint of our remnants in Svalbard, Norway. We asked Devine about her inspiration behind the project and process of capturing garbage portraits.

What inspired your interest in documenting garbage accumulation in the Arctic?

Great question – I have a couple interrelated reasons for documenting a sample of the marine debris we found in the Arctic. When I committed to joining Clean Up Svalbard, an initiative of the Government of Svalbard (Norway) I knew I wanted to bring some of the marine trash home. I wasn’t quite sure what I’d do with it, but my friend and an innovative curator I respect, Dr. David Pantalony at the Canadian Museum of Science and Technology, encouraged me to bring some trash home. I didn’t quite know why then but it made sense. I was also increasingly learning about the power and importance of objects. At the time I was working for the Museum of AIDS in Africa (a public institution and mobile exhibit of the origins, spread, and impact of HIV/AIDS in Africa). Colleagues in South Africa were doing group “touch” therapy with people living with HIV/AIDS including youth and elders, using objects and through our work and that of other museums, galleries and institutions – we know the power of objects in telling stories about the past and present. Then they can be preserved for future generations. I’m happy to say that the Canadian Science and Technology Museum has officially collected the Arctic objects and they will be exhibited in November 2017 as part of an exhibit on marine science and ocean health. 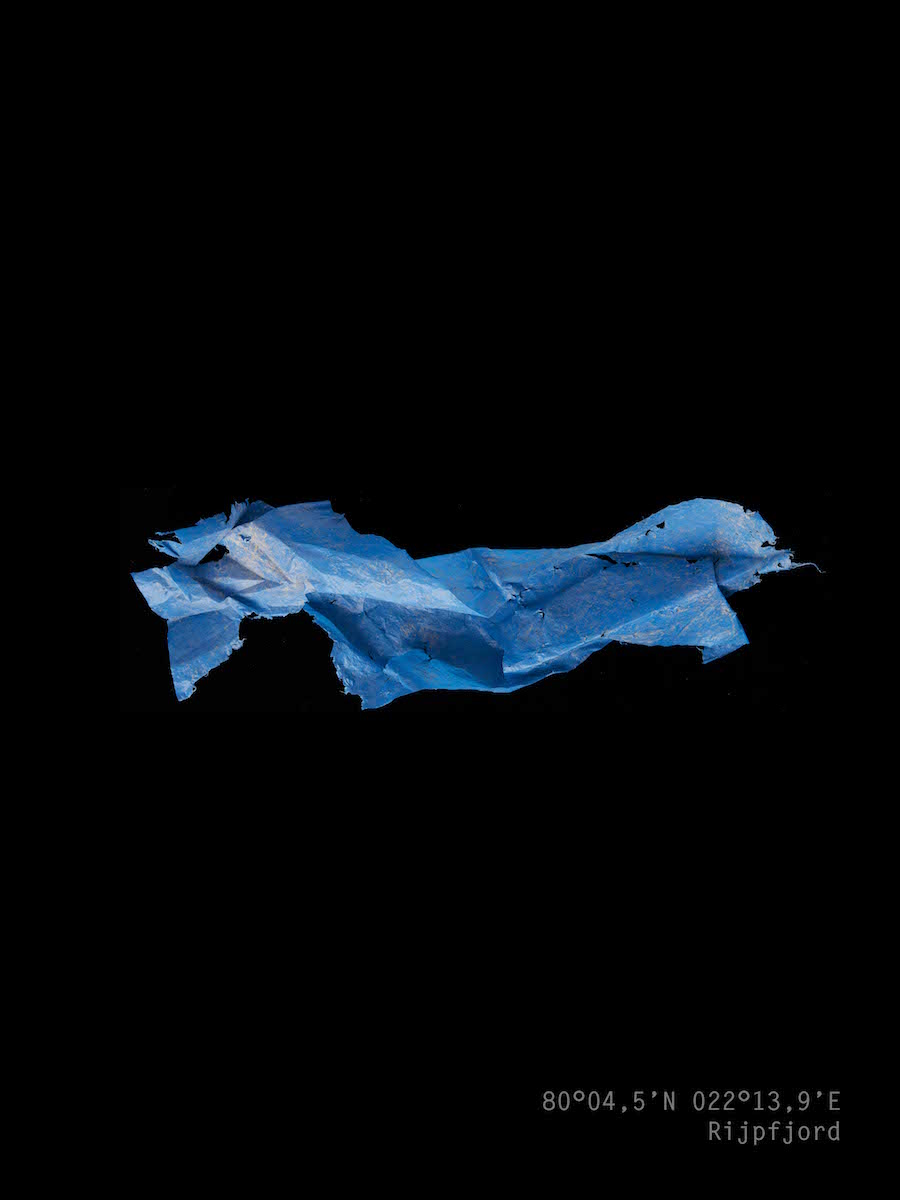 Finally, as I had led a clean up project in the Antarctic nearly 20 years prior, I was keen to compare what we found there and in the opposite “refrigerator of the world”. I loved that my colleague on the expedition, Wendy Trusler the cook and artist-in-residence, had brought home a jar full of nails that volunteers had collected by hand. Looking at and holding these nails decades later is an incredible feeling of wonderment, curiosity and a bit of grief that we, humans, discard things so wantonly. In Antarctica garbage removal is important, because the continent is a big ice sheet and garbage doesn’t decompose easily. Yet, we have to think about how garbage impacts ecosystems, waters, animal and human health. I believe there is no morally superior place for garbage. Initiatives, like the Clean Up Svalbard exhibition, matter both physically and symbolically by inspiring others to take action and create solutions. 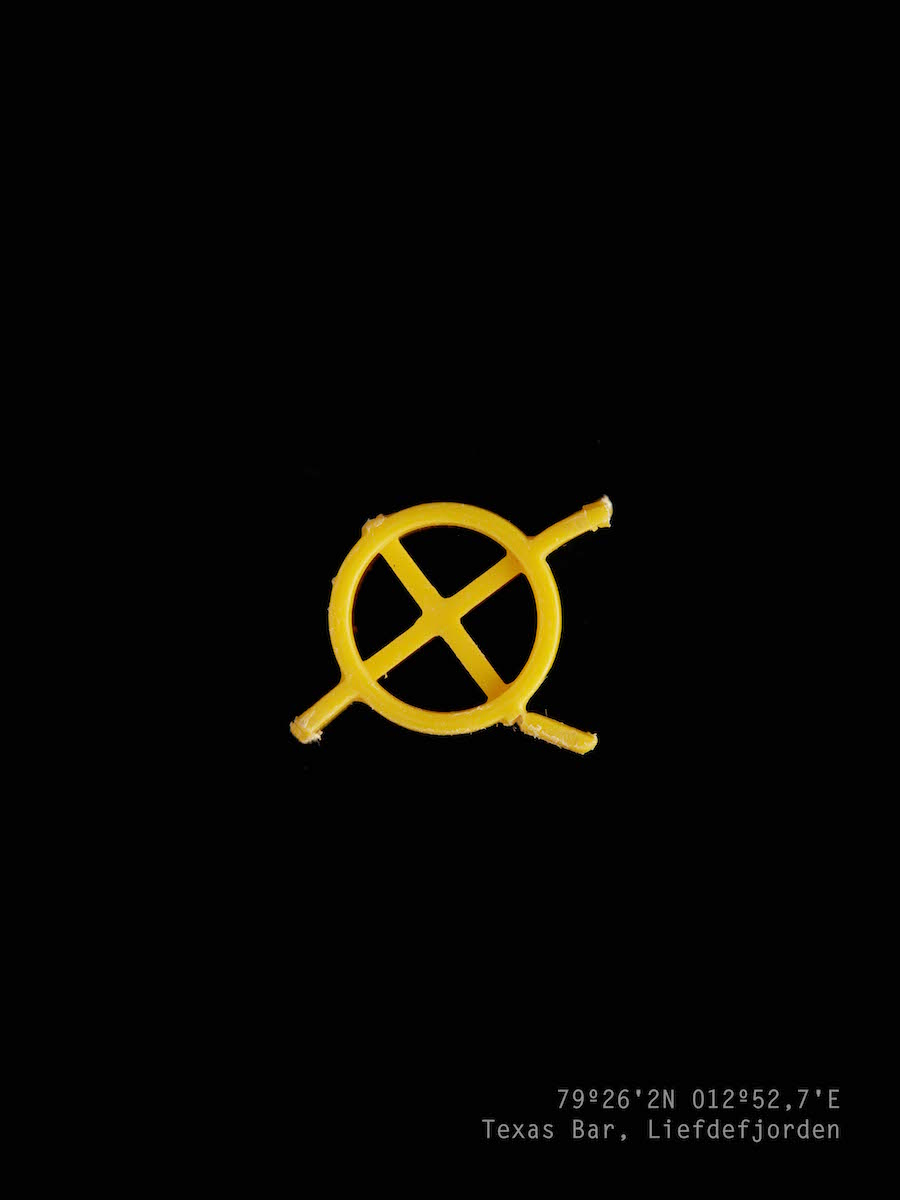 Why did you chose Svalbard, Norway as your project site?

For years, I have wanted to go to the Arctic and with a purpose. Having worked in the Antarctic, writing about both poles, climate and health, environmental protection and policy, I was keen to see the north, whether in Canada or another northern country. Then when I read about Clean Up Svalbard I thought – this is it. It was a pilot first civilian clean up in Svalbard and it resonated with me as I’d led the first civilian clean up in the Antarctic in 1995-1996 with the Russian Antarctic Expedition and volunteers with a small Canadian environmental NGO I was running. It was good polar parallelism – I wanted to compare and contribute what I had learned. 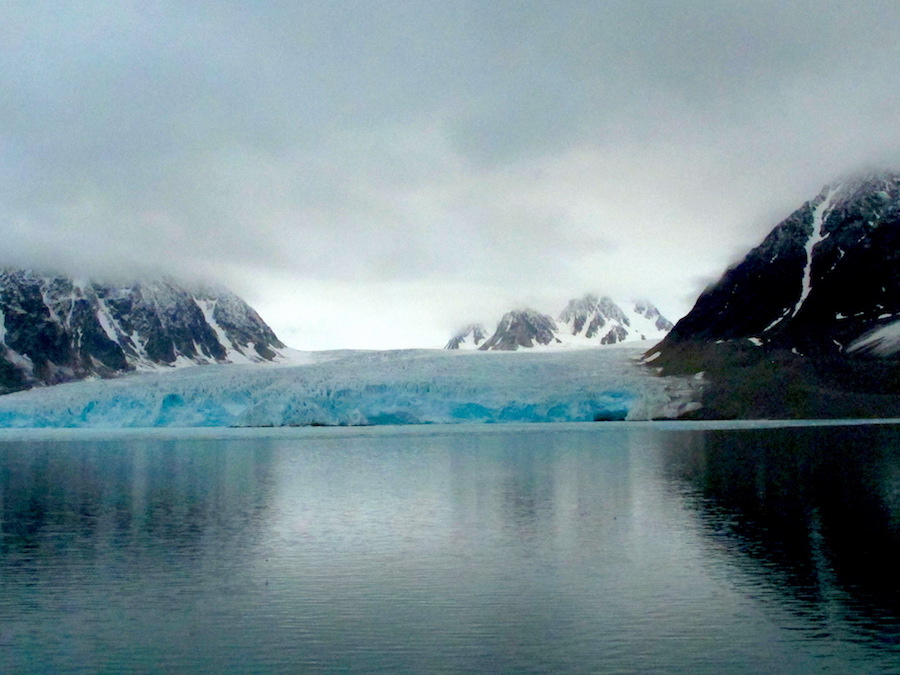 Svalbard intrigued me because it has a permanent population compared to Antarctica where the population is seasonal and non-permanent. There are similarities; both are polar regions, demilitarized zones, governed by Treaty and both are important places for climate science.

In addition, I am interested in ocean circulation, microplastics and toxins. We learn more and more from studies showing that plastics dumped in UK seas are carried to the Arctic within two years and cause “extreme” harm to polar environment. But, there are cleanups all around the world, because it is a global problem worth solving one piece of litter at a time. 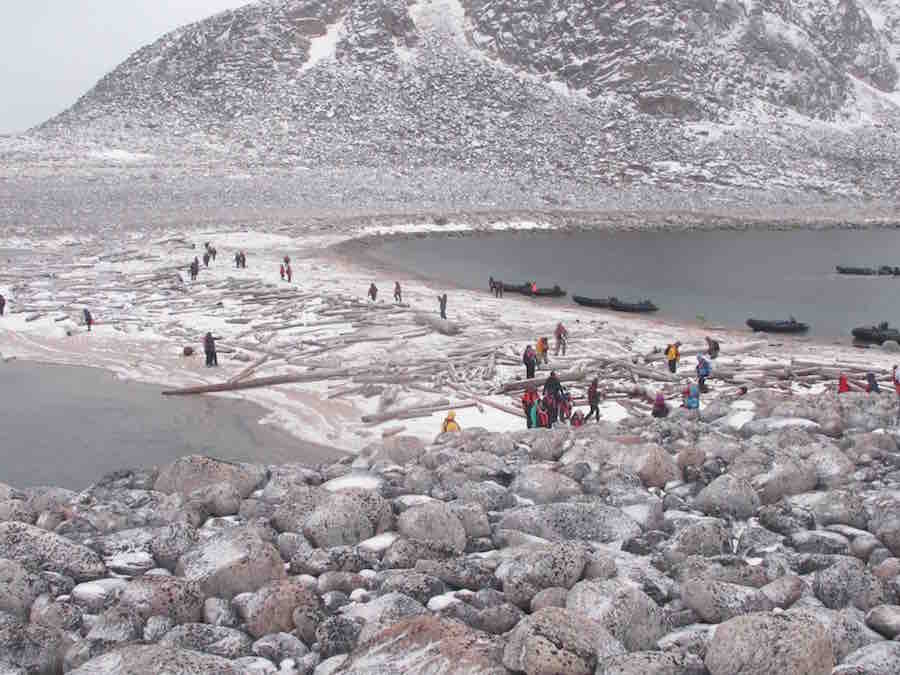 Cleaning up the Svalbard Landscape

Can you briefly describe what was involved in creating Aqua mess and any personal reflections on the process?

On the ship I met another clean up volunteer, Swedish academic and documentary filmmaker Heinrikke Baumann. We discussed what debris we had found and observed the role of SciArt through my “floating exhibition” of art made from garbage. We wondered how people respond to SciArt that is beautiful and aesthetically pleasing, compared to SciArt that illustrates an underlying and overt ugliness of pollution. I wanted to know: what inspires behaviours of policy change? My goal was to show each piece of debris in a stark portrait style, so people see them clearly. In each “portrait of garbage” I also note the latitude, longitude and place where it was found in the far right corner of the image. I did this, because I wanted people to know where the garbage was found and question how each piece of debris got there in the first place. Additionally, I want an audience to inquire about the impacts of this garbage on the water, land, animals and ultimately us as a human species.

I borrowed a camera and studio to shoot the objects on black velvet. The whole session took a day. Then I researched the geographic coordinates. There was a lot of Svalbard sand on the objects, so we removed the beach residue before shooting. I like the objects to be shown with a few landscapes shots and polar bear prints, so people see how forlorn and beautiful Svalbard is, and how our actions impact places far away. 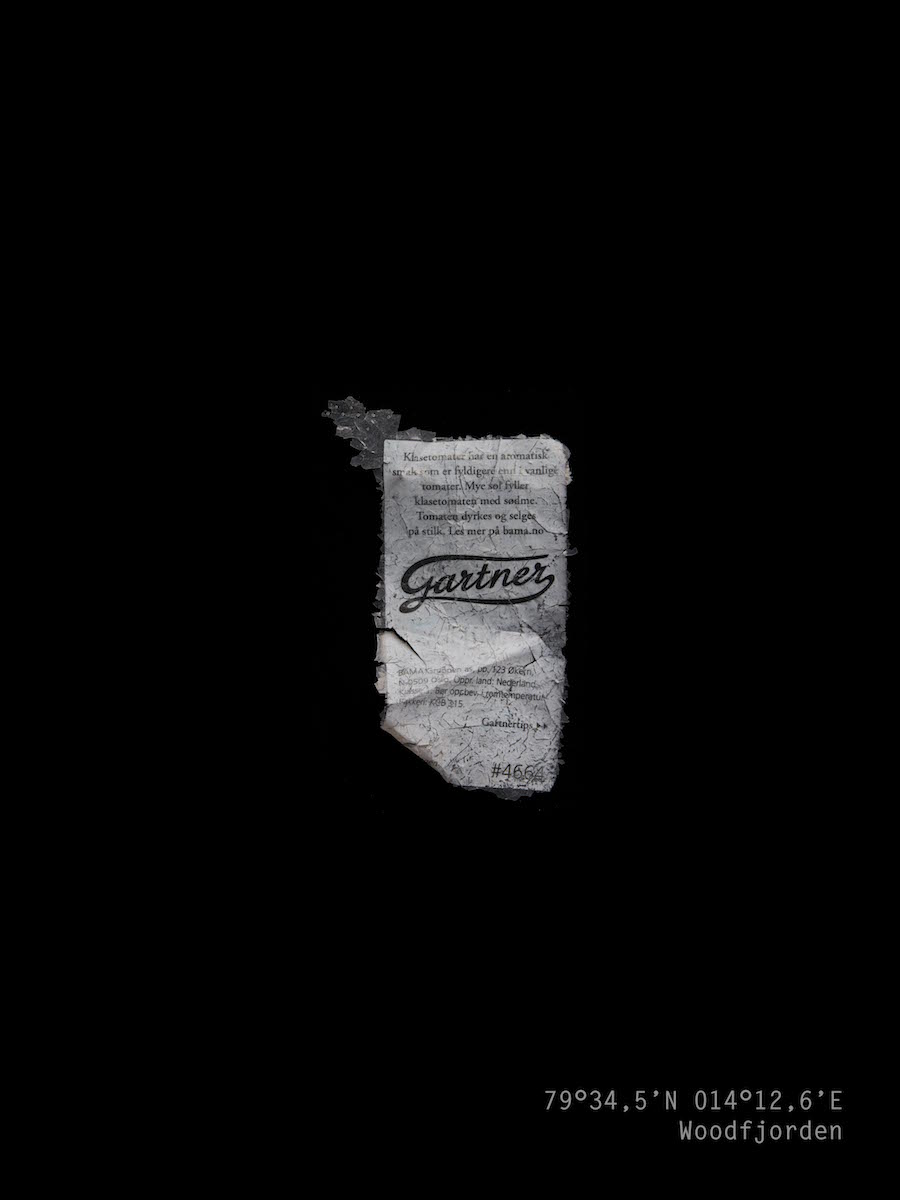 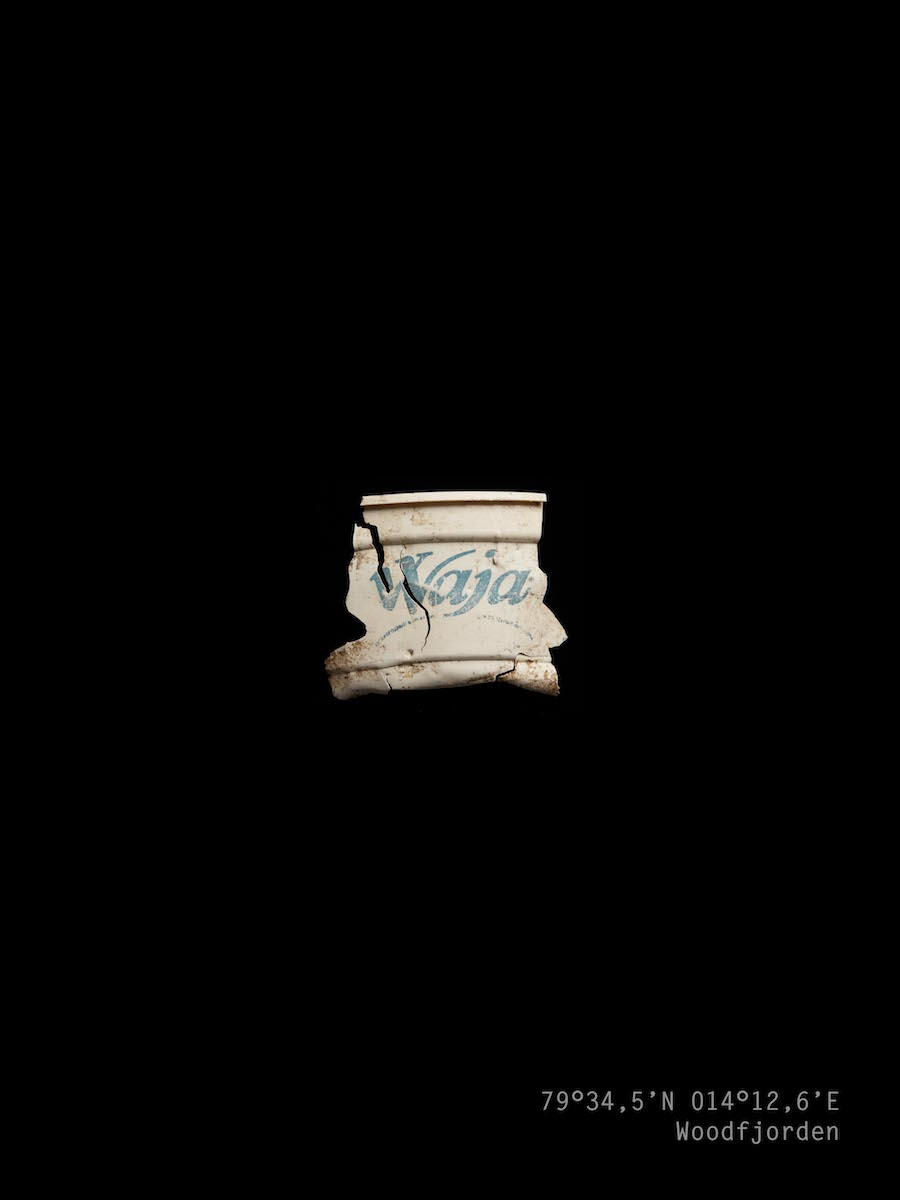 Which portraits in Aqua Mess stand out to you, and why?

I cannot get the images of the toys, such as the small broken plastic “parachute man”, out of my mind. Toys seem more personal and evocative than unidentifiable pieces of plastic, fishing nets or crates. When I saw a little man without a head, or other doll heads, I wondered who the child was who played with them. Now, I’m seeing these items in a place above 80 degrees north where very few humans and far more walruses have been. I wonder too, who dumped it there? Was it inadvertent littering? Carelessness or poor waste management? How did it end up so far north? How can we ensure fishing nets are better disposed of, and biodegradable? I’m glad individuals, academics, institutions, businesses and organizations are thinking of these important issues. 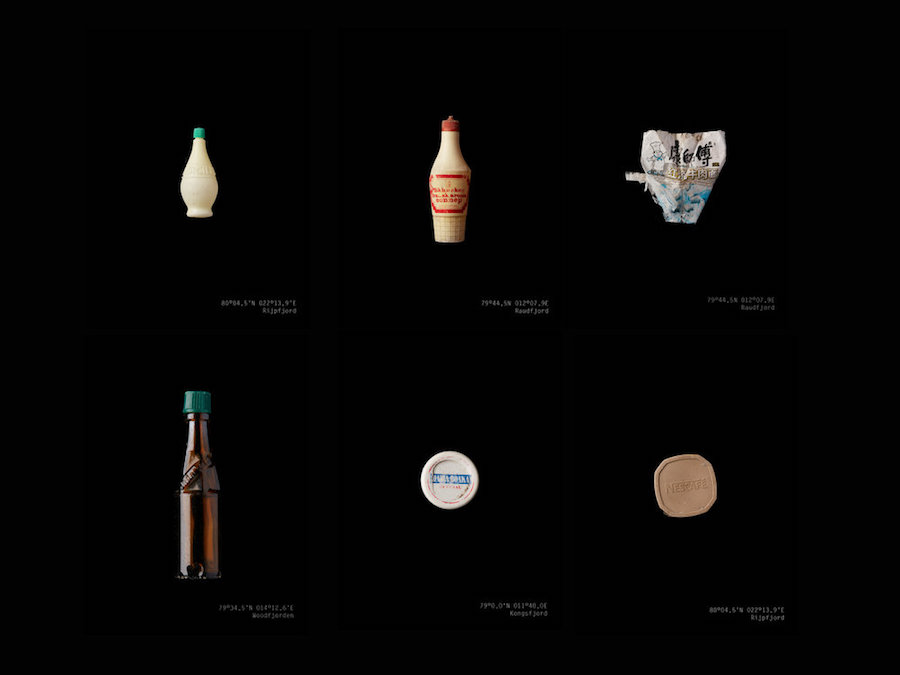