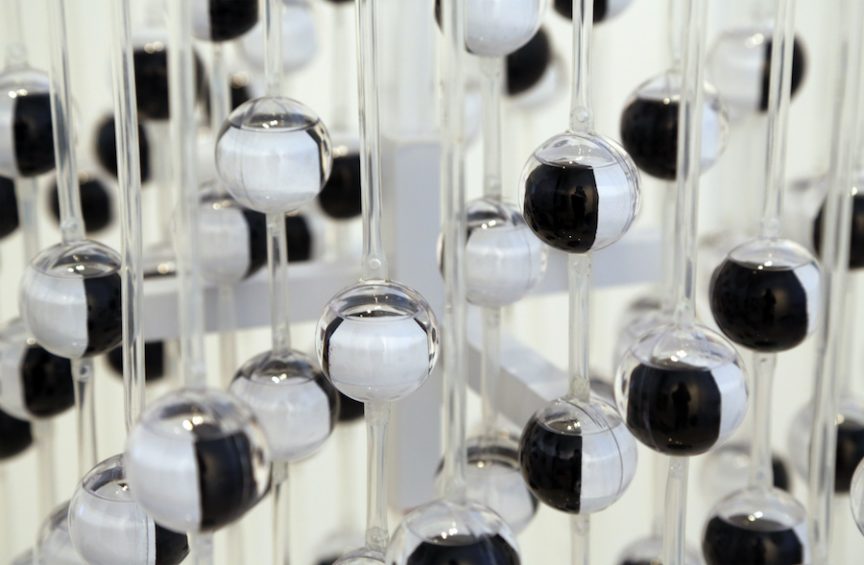 What inspired you to create Spatial Magnetic Field Visualization?

As an interactive artist, my work has dealt with my personal side trying to find connections of scattered inspirations, such as childhood toys, memory, and humanness. For each project, I try to make a system that has its own set of concepts to enable and explain each piece. In a way, my work process has been similar to creating a game that can be played with a set of rules that come with conviction, though it may seem arbitrary.

For Spatial Magnetic Field Visualization, I was intrigued by the idea that rules come from the existing, yet invisible force of nature: the magnetic fields. Also, as somebody who almost always requires electricity to create work, I wanted to pay tribute to this source of energy in nature. In that regard, I was interested in creating a sundial a few years back, but I hadn’t produced a project yet.  When Hyomin Kim, my collaborator in this project, expressed his interest in working together to make a new form of magnetic field visualization, it sounded like a good first project for me to work with natural data. 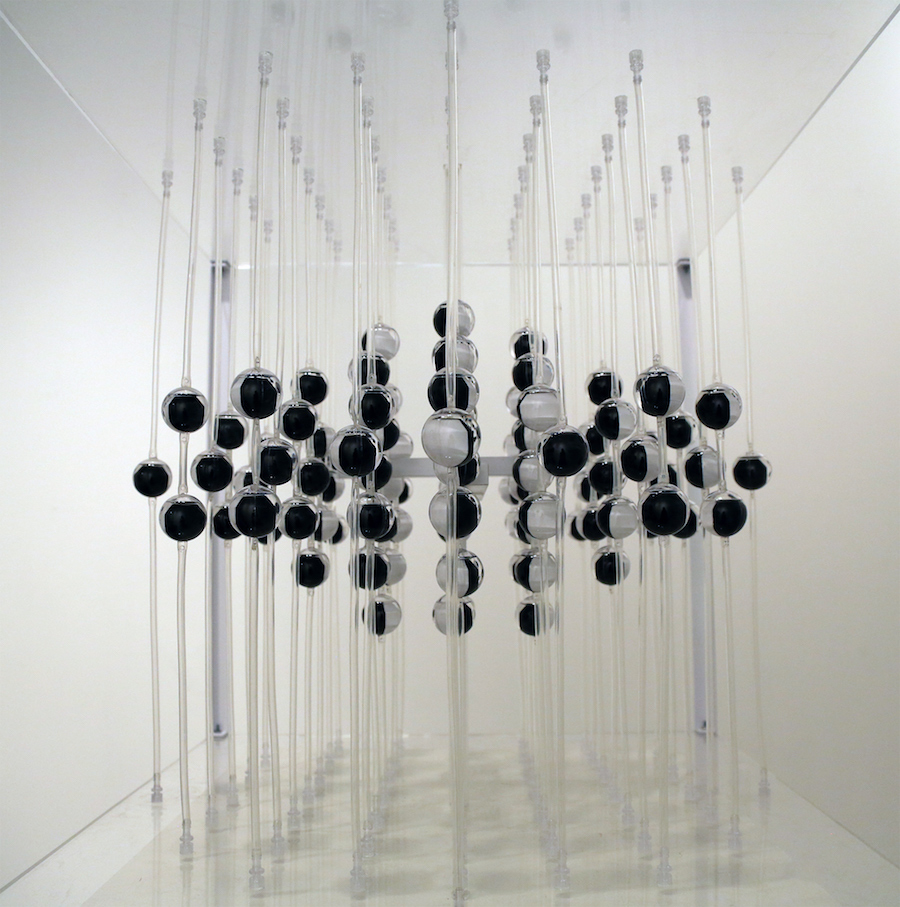 Hyomin Kim, as a space physicist studying the Earth’s magnetic fields, felt the way a magnetic field was traditionally represented (regular graphs or iron filing lines in the science class) could be improved and trigger interest from the general public. “Scientific data and models representing the invisible fields of force that surround us look quite amazing and beautiful in a sense. It may be overwhelming, however, for the general public to simply “enjoy” those. So I was always looking for a way to convey the wonder and joy of natural phenomena in a pleasing and yet educational and inspiring way”, says Hyomin. This is where our mutual interest meets.

I thought it would be very interesting to use electromagnets as the enabler of the movement that influences a whole spatial dimension, rather than using motors to create a programmed movement. The idea that the motion could be created without motors was one of the things that got me interested during the initial discussion. 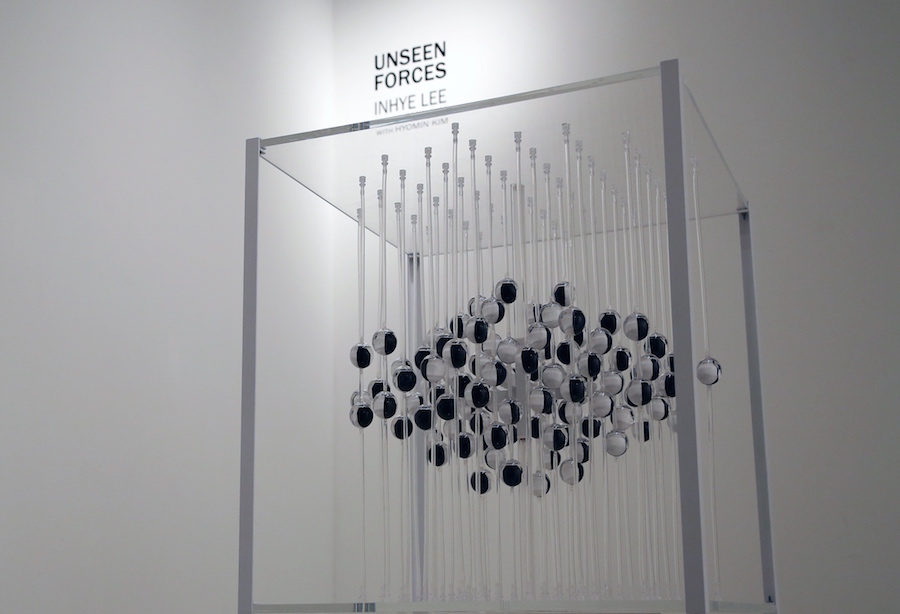 How did you and Dr. Hyomin Kim work together on this project. Describe your collaborations as artist and scientist.

Inhye: We built the piece together. There was always idea sharing, though we had a sort of clear division on what each of us was in charge of. We have a different understanding of subjects and different expectations about things. But, I guess that’s how the world works. In reality, my role was conceptualizing the artwork, visual design, material research and trials, and making software together with an arduino. I spent several months just doing research and testing materials. In general, I like researching and finding a solution to get to the end goal for each project, but this project required some time to get us there.

Dr. Hyomin Kim: My work was, as expected, focused more on its science aspect, such as visualizations driven by actual science data, and delivery of scientific understandings and the intriguing stories behind it. For example, I wanted to make the project “data-driven” so it is not only visually pleasing but also storytelling. Some of the data that drives the installation was obtained from observatories that monitored the Earth’s magnetic fields during one of the most powerful geomagnetic disturbance events in history. We were excited to bring such historically and scientifically meaningful events into our miniaturized version of nature. I have been involved in various projects for magnetic field measurements and thus, not surprisingly, worked on a so-called “magnetic field generator” containing magnet wires and electronic circuits to create magnetic fields around the installation using science data.

Inhye: Though there were earlier attempts that look different from the current version, I had a clear vision of what the installation would entail. I wanted to show a pattern (visual, motion) dependant on the magnetic field change. It would be spatial and three dimensional.  It would look clean and transparent so that the audience could focus on the change, rather than being disturbed by the structure.  Sometimes I had to persuade my collaborator, “No… I think it doesn’t look good if you expose the solenoids’ red enamel wires. It should be hidden and people should be curious how the movement happens”.

Hyomin: I challenged her saying: “I’d like to have all the crazy wirings and structures exposed so people can appreciate them. I kind of like them, as long as they serve their purpose.” I have to admit that as an experimental scientist, my job is to always make my instruments work properly and accurately. Aesthetics are never prioritized over functionality to meet science goals. 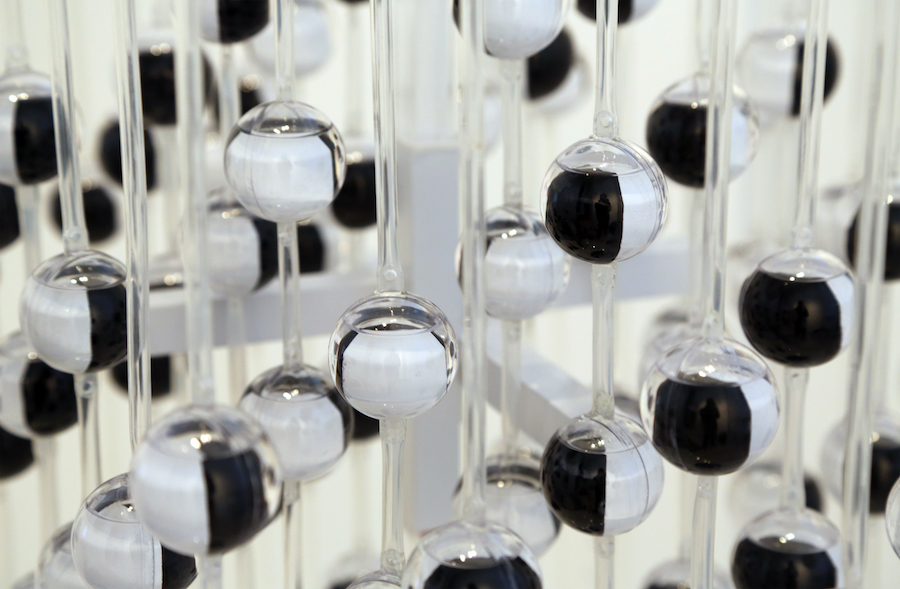 Can you briefly describe what was involved in creating the exhibition and offer any personal reflections on the process?

The whole process took almost 10 months including the initial discussion and some failed attempts at the beginning. The actual production of this particular design took about 6 months. As described earlier, it involved a lot of material research and trials. In the end, we modified ready-made ball compasses as the pixels in the space. The process of making the ball compasses involved many steps:  1. Break the ready-made ball compasses; 2. Collect the lubricant liquid inside; 3. Paint the compasses in two colours; 4. Place each ball in a Christmas ornament case; 5. Close the case with glue; 6. Put the liquid back in; 7. Seal it nice and tight. It was quite challenging to find the right lubricant and paint for the ball compasses and it took a while to find the perfect glue as well.

To commemorate and share this long and winding process, I created a small section in the exhibition on how the ready-made ball compasses transformed into the finished pixels in the installation. For me, it was interesting that we had to deal with the physics of materials so much (viscosity, buoyancy, gravity among other things), in order to deliver the meaning of space physics. We learned a lot. I also made a magnetic field drawing station as part of the exhibition, so the audience could have something interactive and playful with the concept of the Earth’s magnetic field change. 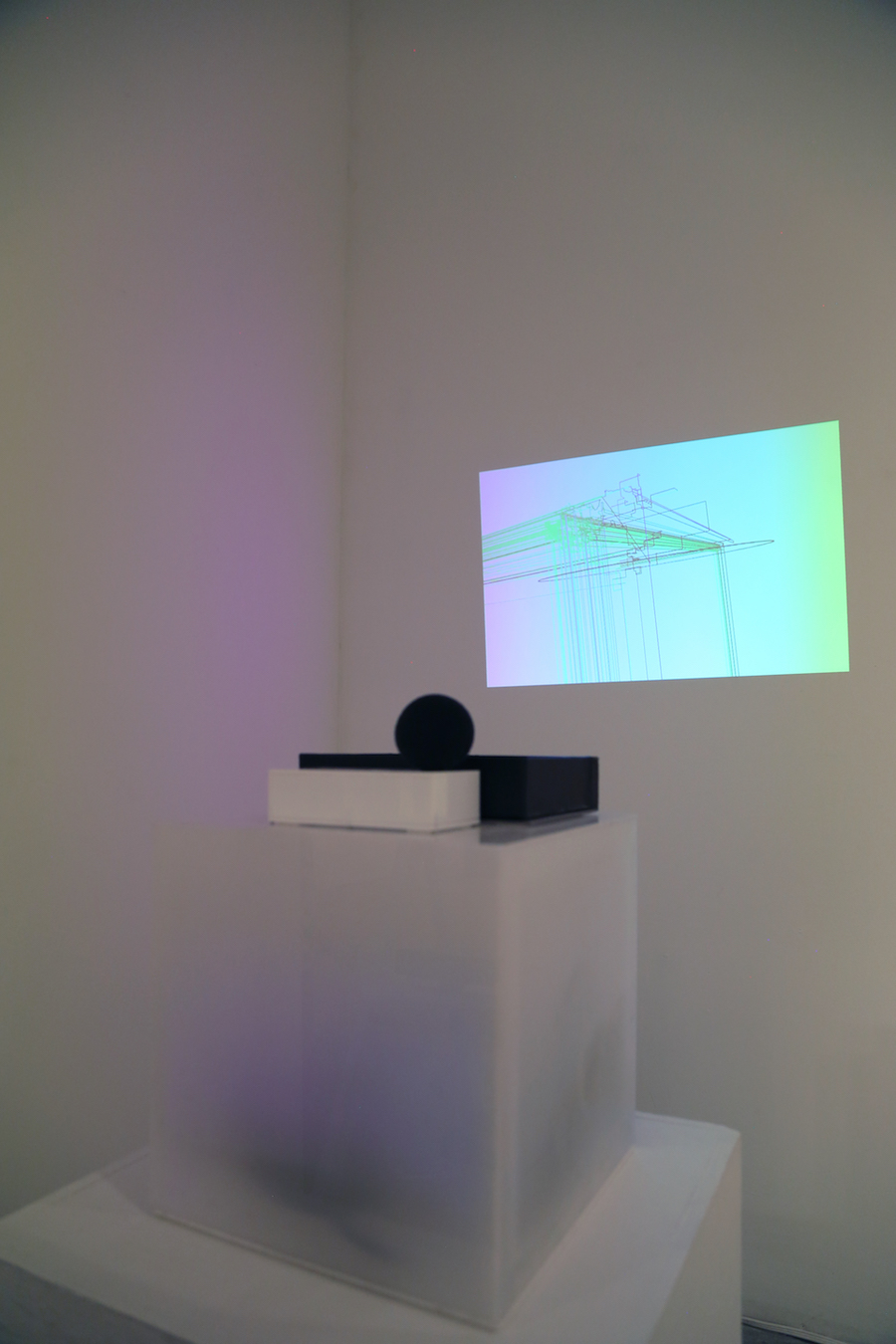 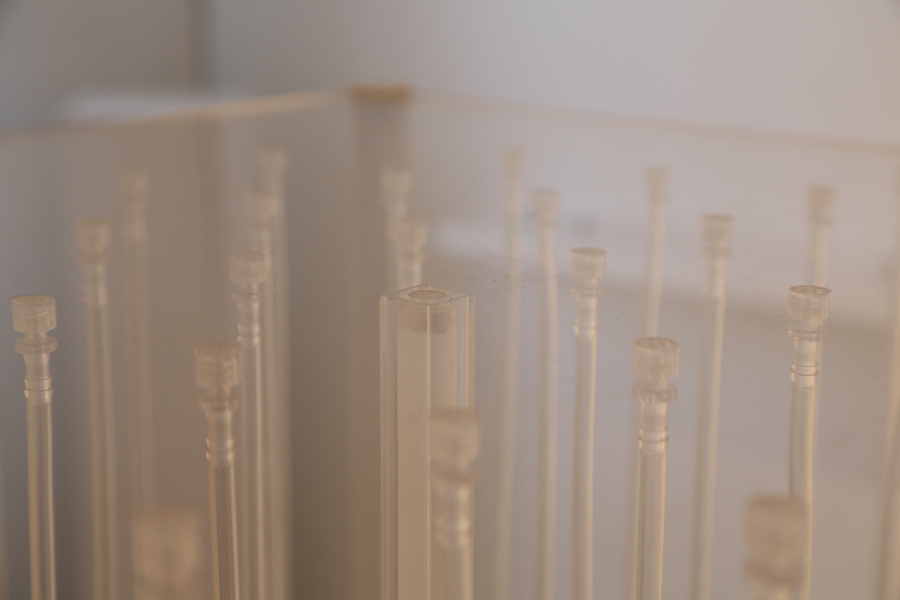 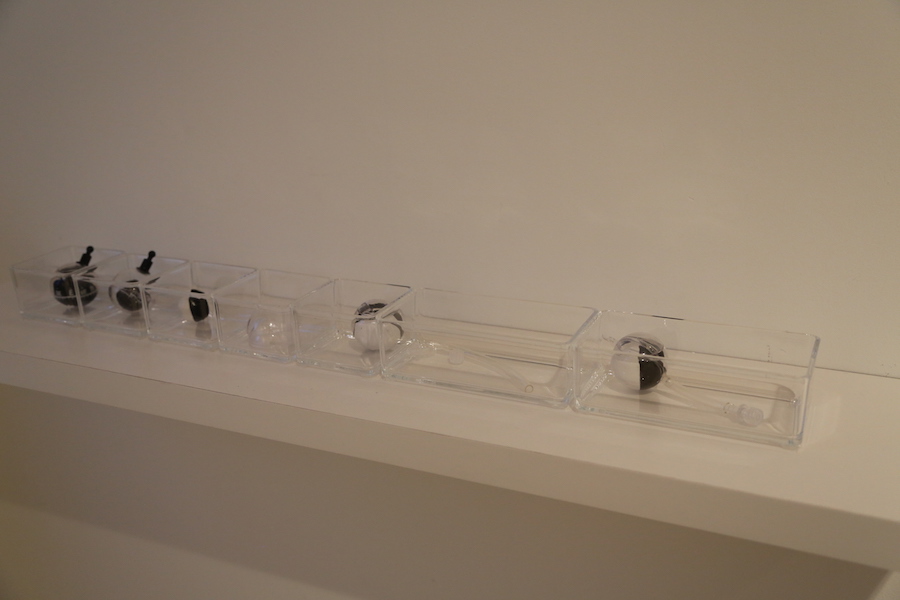 What was the overall intent of your artwork and how has your exhibition been received by the public?

The intention was to visualize the invisible force of the Earth’s magnetic field in a way that would get people interested in the subject. Hyomin pointed out that not a lot of the general public were aware of the sun and Earth’s connection, even though the impact of what is now called “space weather” on human life and technology is substantial. In other words, we wanted this installation to be a conversation starter for this natural phenomenon and its impact on us. Of course, I also hoped that the installation would be interesting enough for people to ask how it works. For me, the work should be made with a good clear intention, but there has to be some mystery for people so that they can ask questions or get unexpected laughs. In this project’s case, I think the silent movement enabler (three axis solenoids) was something that could be intriguing to an audience.

When we showed the installation at the World Maker Faire, we received many questions from the audience who were keenly interested in science and engineering. Showing this work at an art gallery obviously generated different questions. One memorable audience was a blind woman who wanted to experience the work by touching it. Unfortunately, this work was silent and I wasn’t sure if our explanation was meaningful enough for her. This experience made me think that we might want to expand the work so that it speaks another language of nature: sound. Developing a sonic sculpture is a direction we can look into. In general, people seemed to enjoy the conversation that the piece generated and the unusual shape of the installation. A lot of people mentioned the “eyeball”. Many kids wanted to pull or pluck the eyeballs. Some claimed that they had strong biomagnetism and wanted to see if they could drive the movement. Many wished to see it at a bigger scale. All these reactions were fascinating.

During the exhibition, we also organized an art-science talk and discussed space weather, its impact, other art-science collaborations, and our work process. It was a meaningful addition that provided a context to the exhibition.