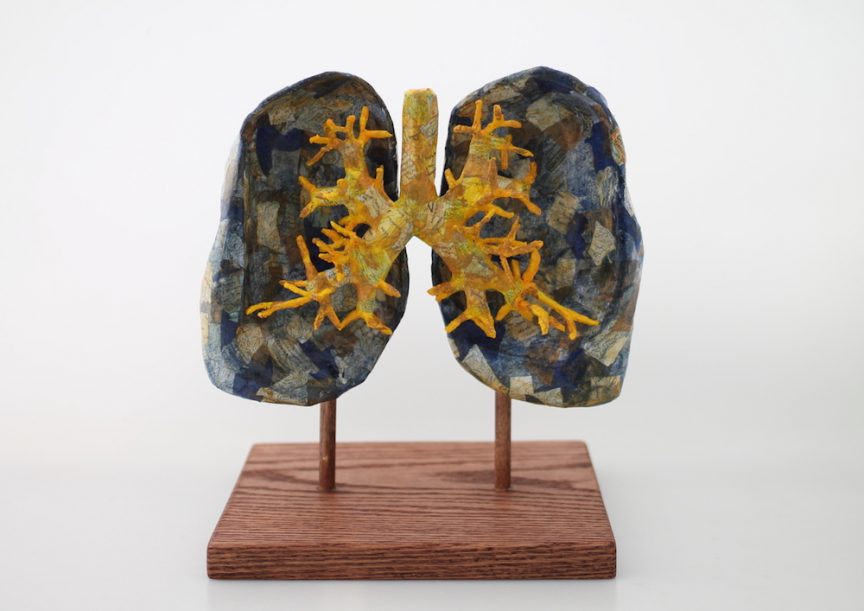 Stephanie Medford is an Edmonton-based artist whose artworks cross a variety of mediums including, linocut, weaving, and paper mache. Inspired by her trip to a medical history museum in Philadelphia, she started marking sculptures of human organs. In our interview, we learn more about Medford’s anatomy-inspired Paper Body series.

What inspired you to create the Paper Body series?

A few years ago I was doing a road trip around the United States and someone suggested that I stop at the Mütter Museum of the College of Physicians of Philadelphia. The museum explores the history of medicine by exhibiting old tools, body parts in jars, models, illustrations, and so much more. It was one of the strangest and most interesting stops on the whole 2-month trip. I found myself both entranced and repulsed at the same time. My favourite exhibits were the papier maché models of organs that were produced in the 19th Century. I learned that Louis Thomas Jerôme Auzoux had developed and popularized the technique, which made it easier to teach anatomy in a time when corpses were hard to preserve and other existing models had limited uses.

I loved the bright colours and intricate details and, along with the tension between fascination and revulsion that I experienced in the museum, they stuck with me for a long time.

A few years later, I had the idea to make an anatomical heart out of paper mache for a friend’s birthday. I covered it in a collage of assorted papers. The result inspired a similar reaction of both interest and excitment. I started making more hearts and placing them in jars or on stands, just like the specimens and models were displayed in the museum. From there, I expanded to eyeballs, brains, lungs, and kidneys. The series is always evolving; I still want to make a uterus, and the cross-section of a heart. 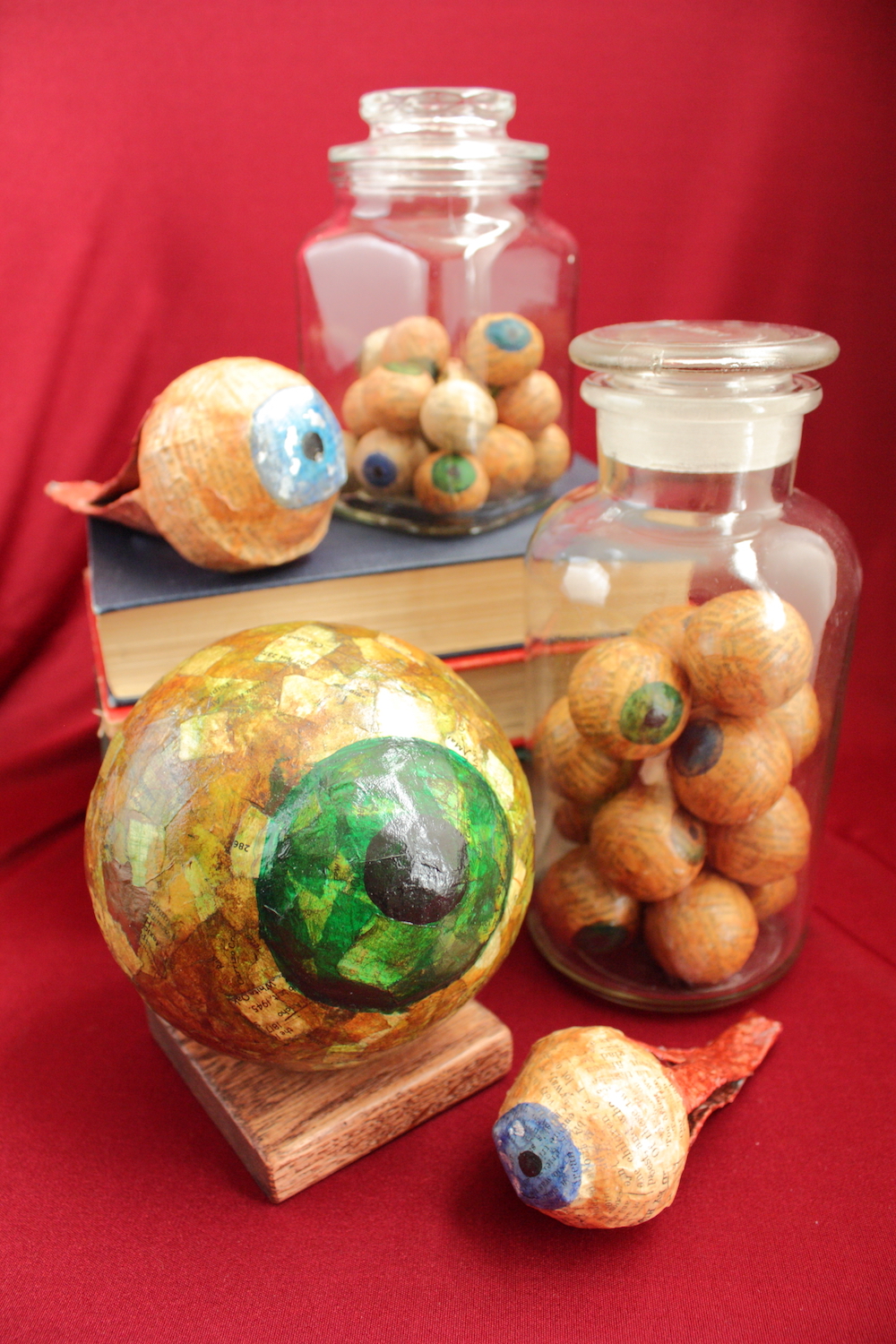 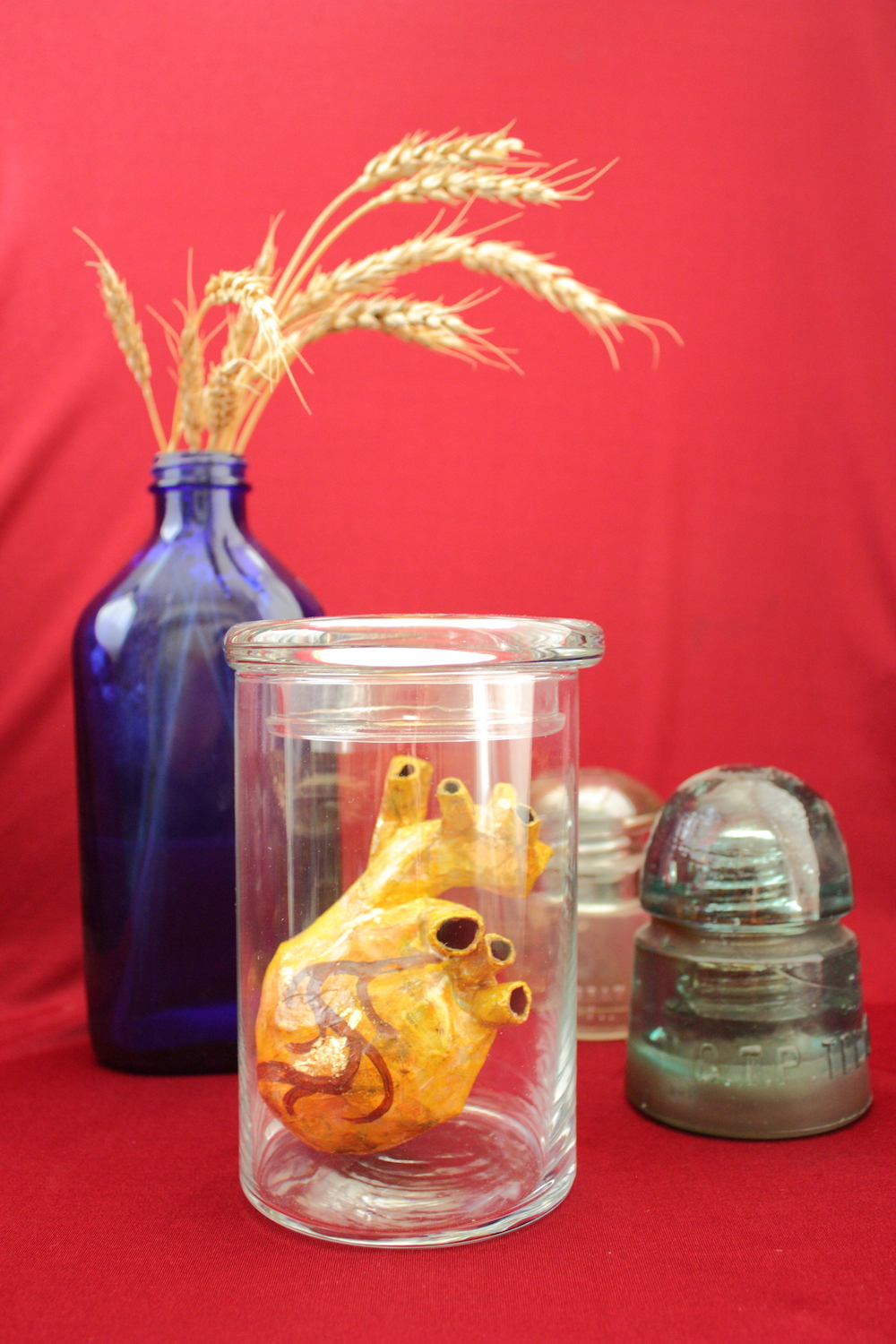 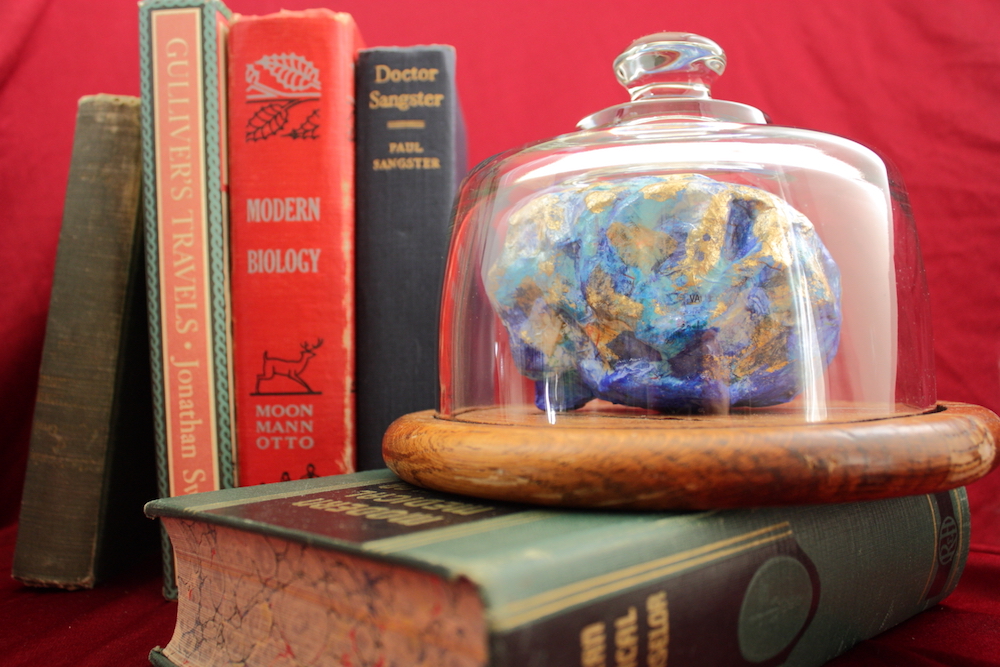 Can you describe what is involved in creating Paper Body?

This collection is inspired by how different organs are visually represented as teaching tools. I start by looking online for either illustrations or digital 3D models with interesting shapes. I don’t work from images of real organs partly due to my own squeamishness and because I’m aiming for the more simplified, readily identifiable shapes that models use. I’m not interested in making something realistic or life-like, but rather something that is clearly an artistic rendering.

Next I create an armature using a variety of materials, depending on the organ: toilet paper tubes, balled up paper, styrofoam balls, and wire. I cover the armature with a few layers of paper maché, then collage over it once it’s dried.

I use a collage of papers like old maps, music notes, or pages torn from a thesaurus or dictionary, along with tissue paper, acrylic paint, and occasionally gold leaf. The assembled ephemera across the surfaces illustrates both our collective history of learning about bodies, but also the personal histories we collect that are written in our organs and on our cells. I use bright colours to make them playful and approachable. 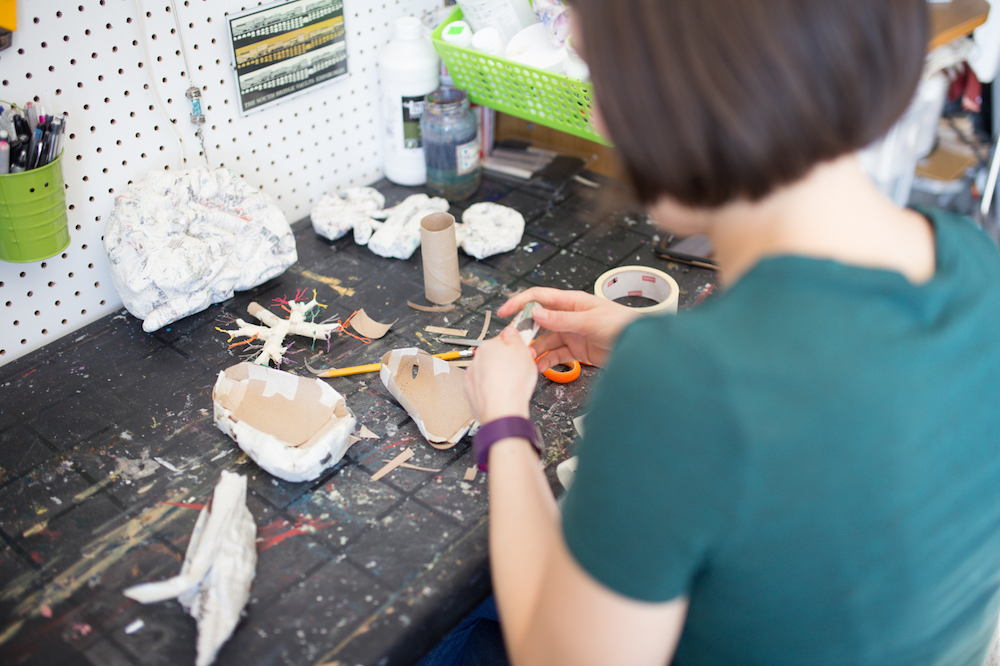 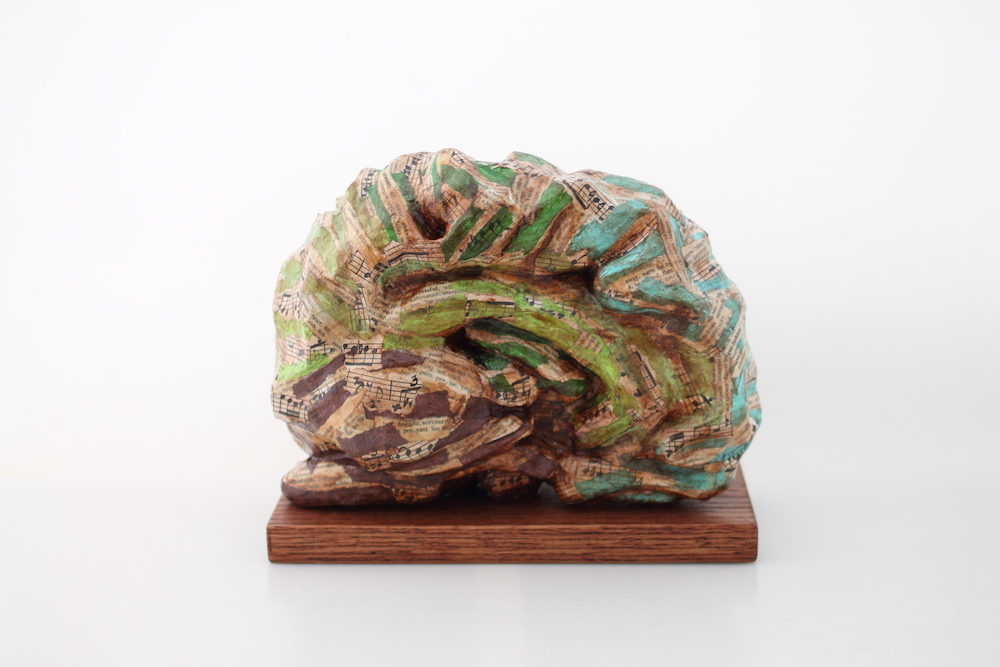 Which piece stands out to you the most and why?

My favourite piece so far is the pair of lungs, partly because I think they’re the most visually striking, and because they presented some interesting challenges to make. Since the bronchioles were too thin for my usual materials, I ended up shaping them all from wire, which was quite tricky to cover in paper. I enjoy the colour contrast of the bronchus against the lobes, as well as the depth created between the two parts. 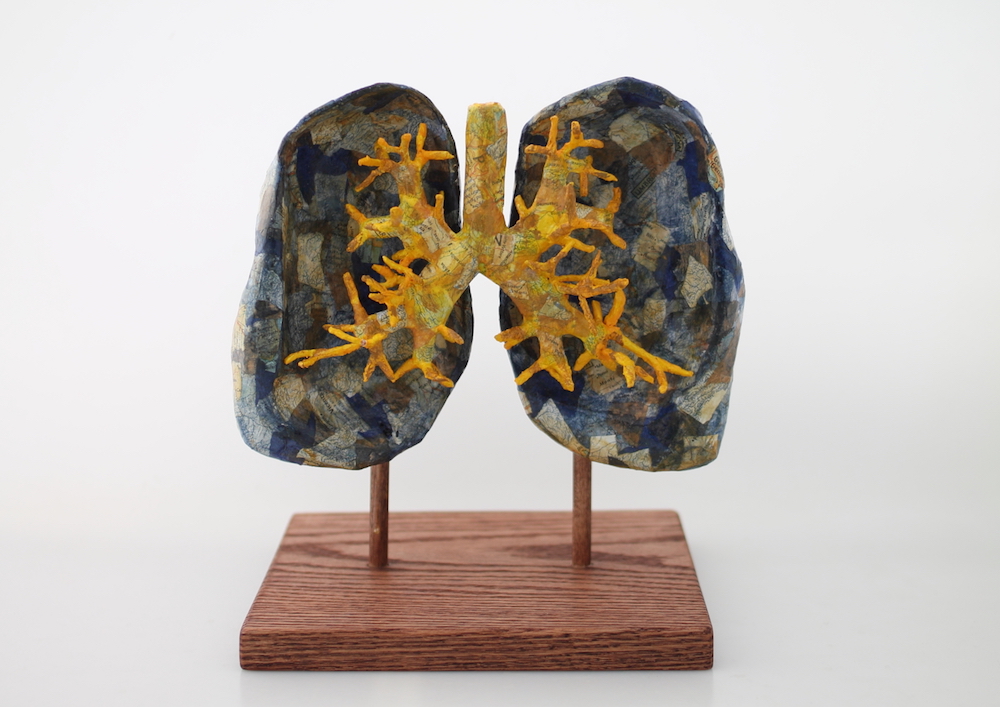 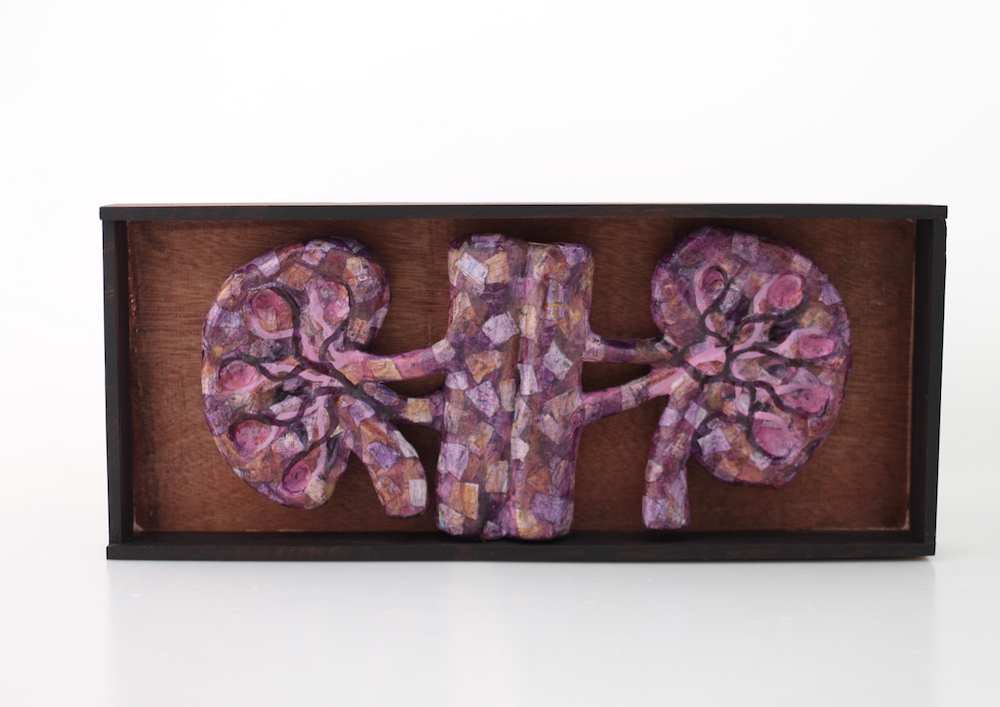 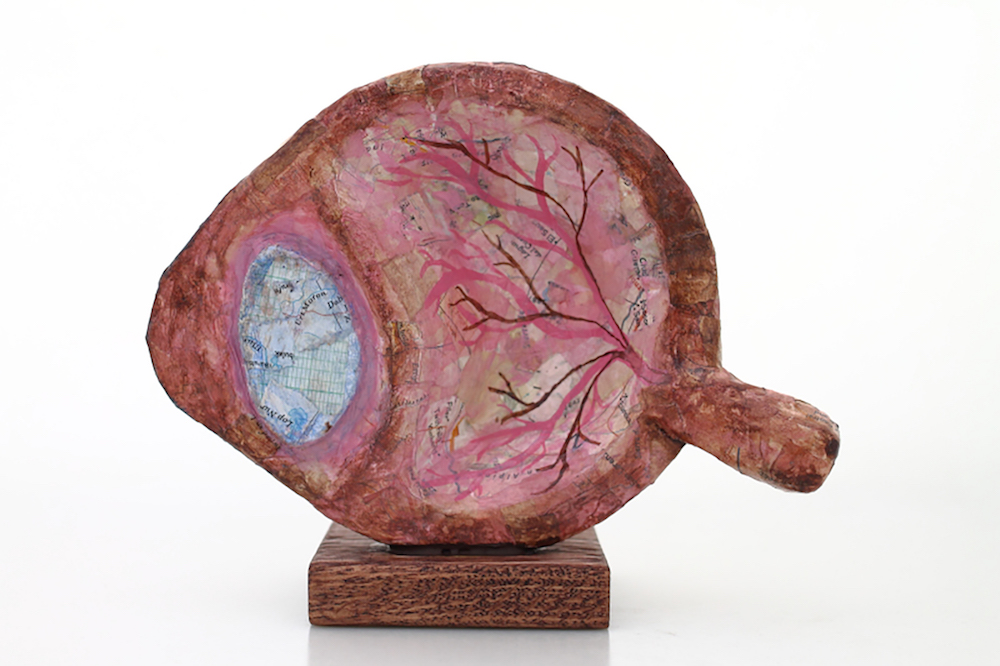 I want to invite viewers to appreciate the beauty and wonder of their bodies in a non-threatening environment. Most of the time, we hold our bodies at a distance – asking them to perform for us, while ignoring their interior functions and processes. When it comes to anatomy, there is a very fine line between something beautiful or even informative, and something grotesque or macabre. I hope that people will experience some of the tension I felt in the Mütter Museum – wanting to approach and understand while also sensing the innate wrongness of viewing body parts detached from the whole.

I love when viewers move in close to examine pieces and I hope they feel inspired to explore the possible stories told on the surfaces of the sculptures and think about the stories that might be told by their own organs and medical histories. 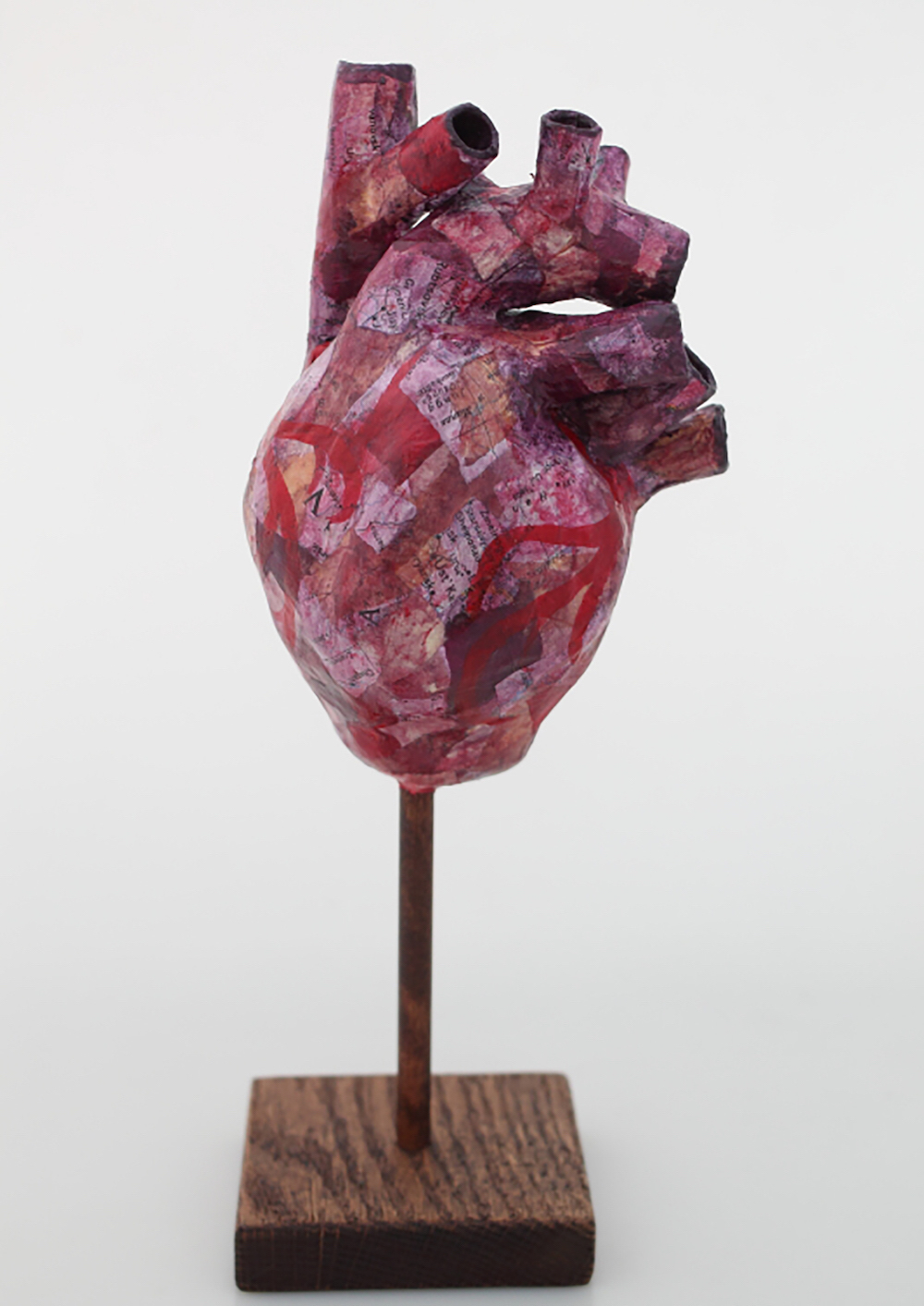 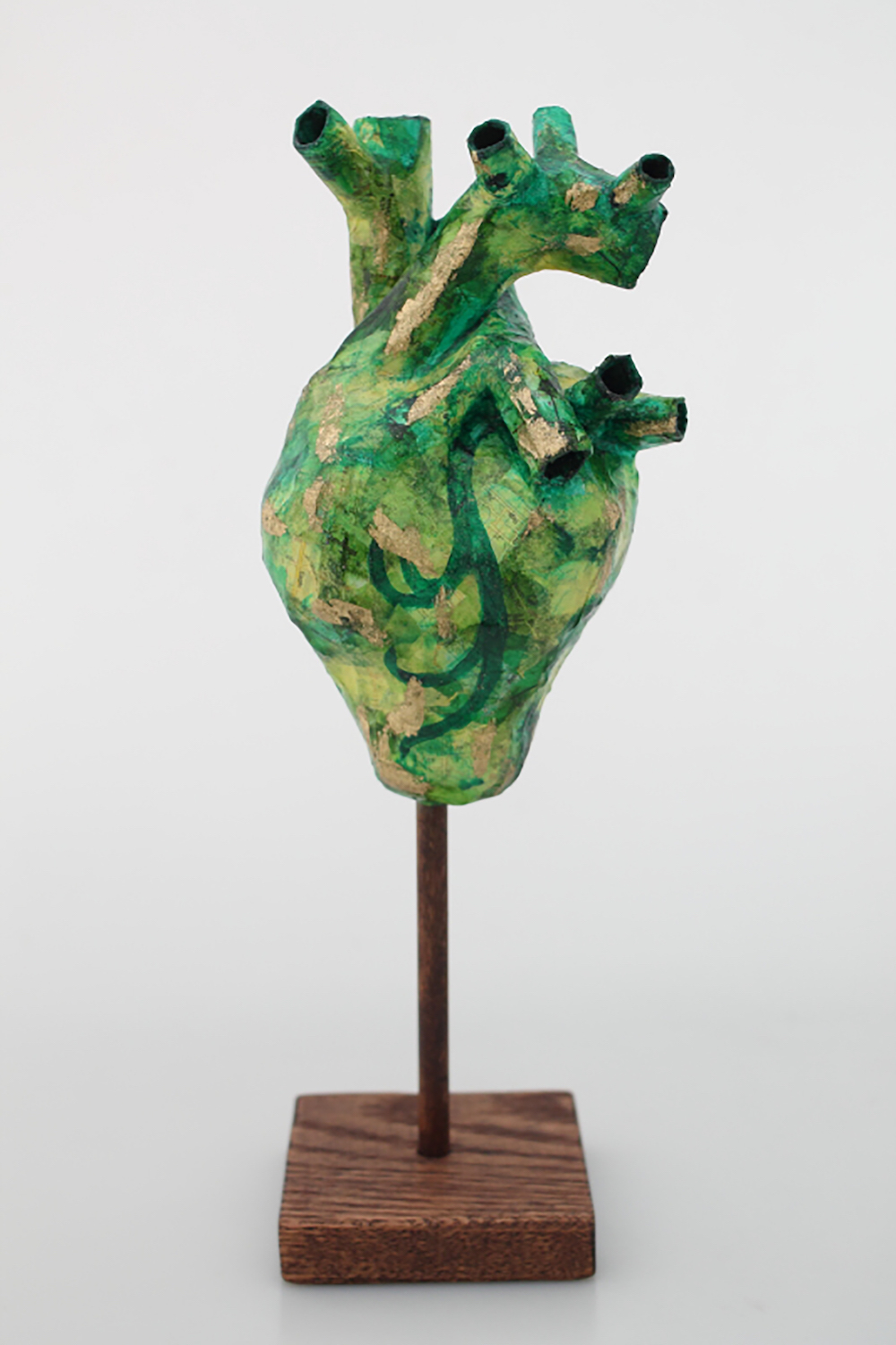