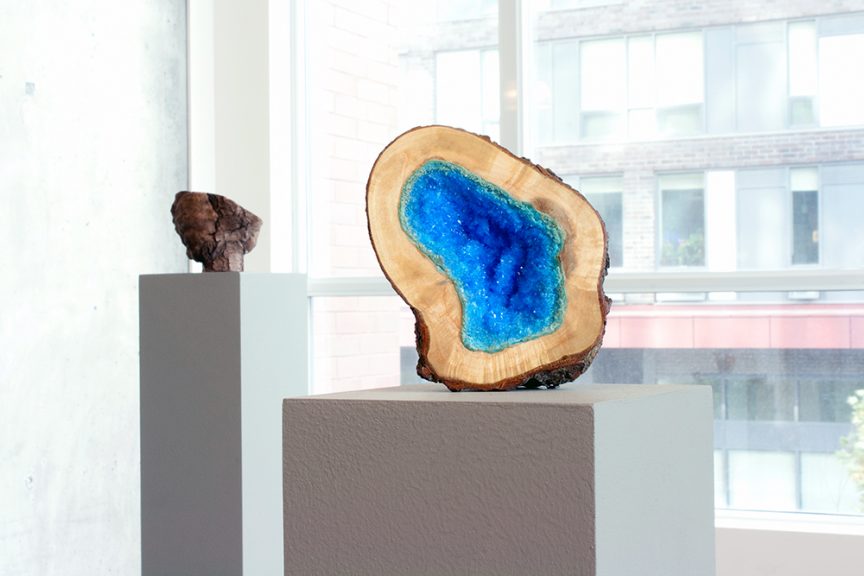 Stefan Herda is a Toronto based artist who incorporates scientific methodology into his artistic practice. Herda fuses crystals and wood in his geology-inspired series Geodes.

“The ‘Found Geodes’ are handmade simulations of geological forms that have inspired curiosity and wonder for ages. Using a combination of carved wood with chemical salts alludes to geological processes using provisional and temporary means. Their artifice is clear yet the objects themselves bear a fantastical resemblance to naturally occurring formations, cheap roadside curios or other-worldly compound objects.” – Stefan Herda 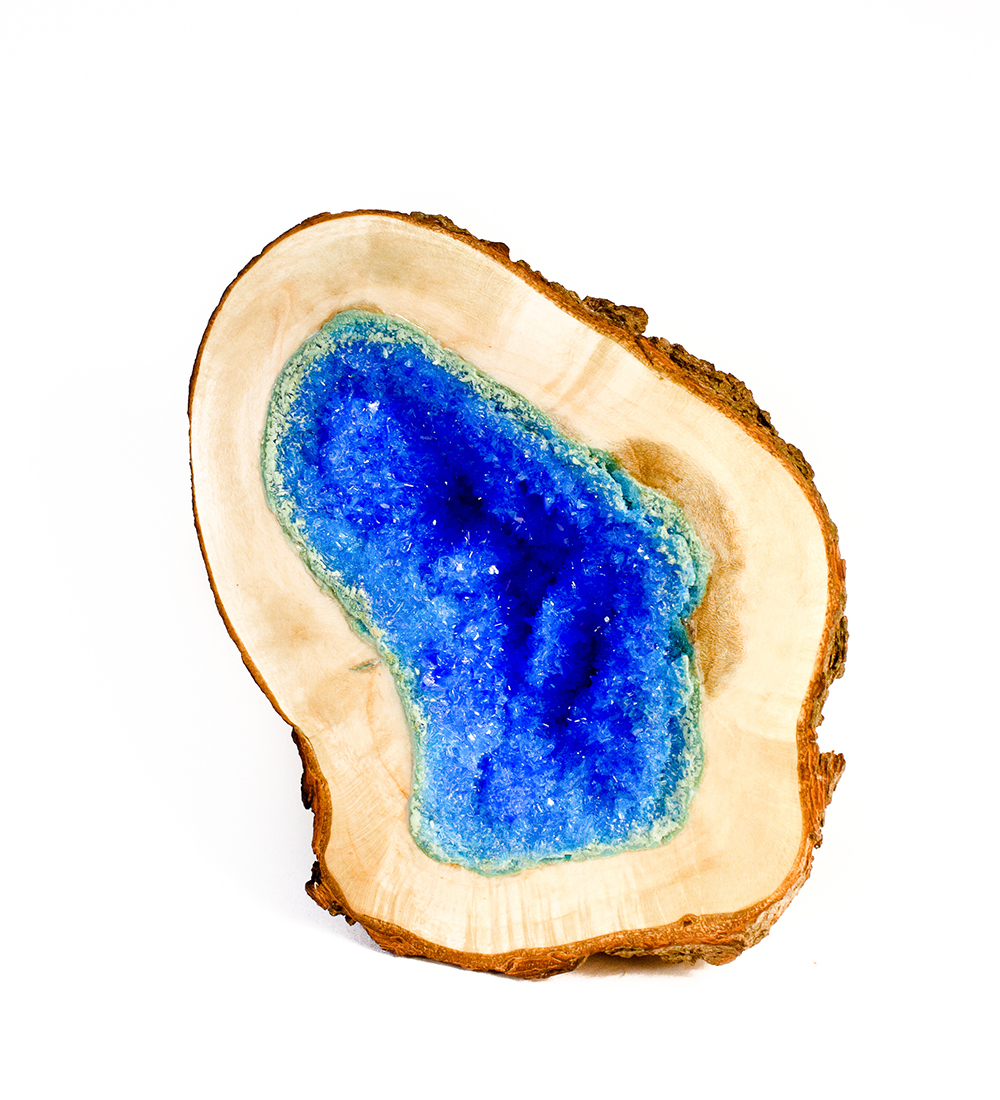 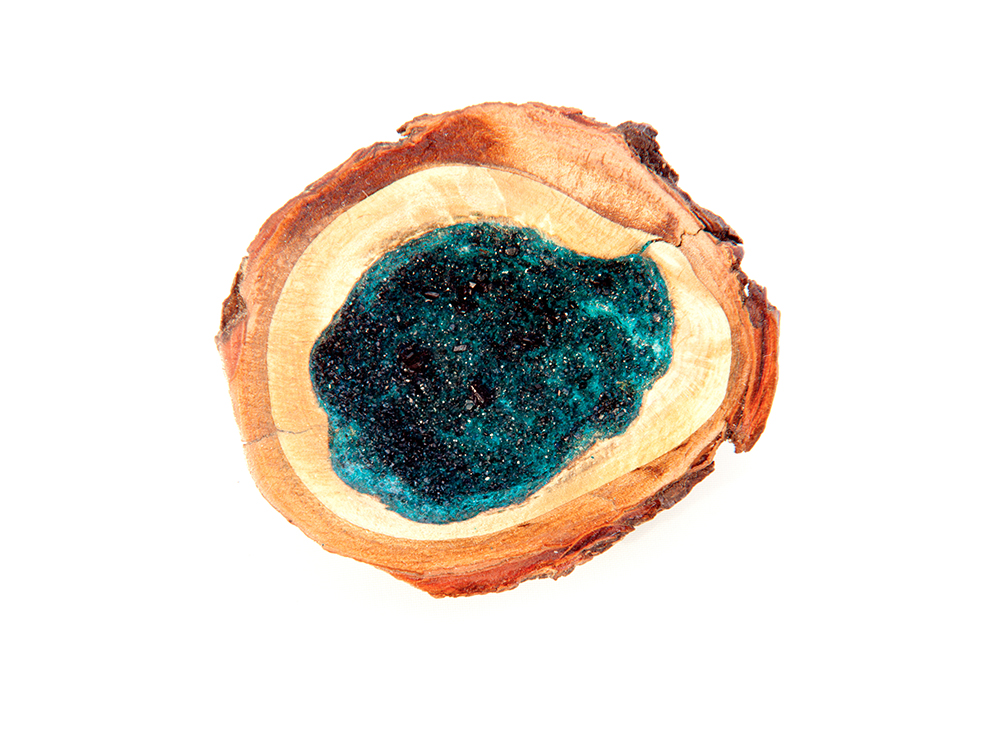 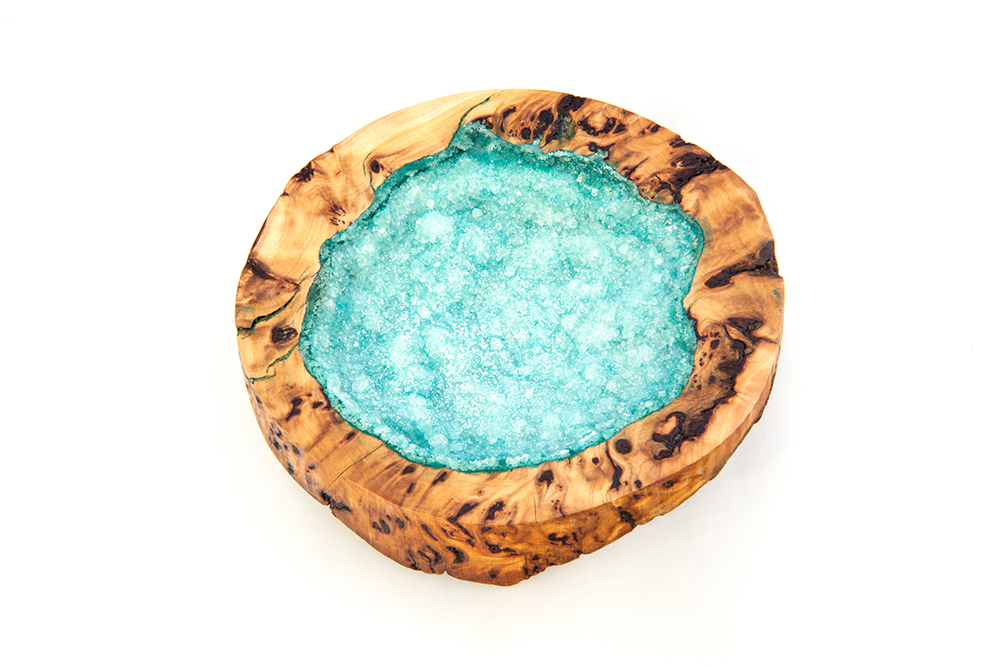 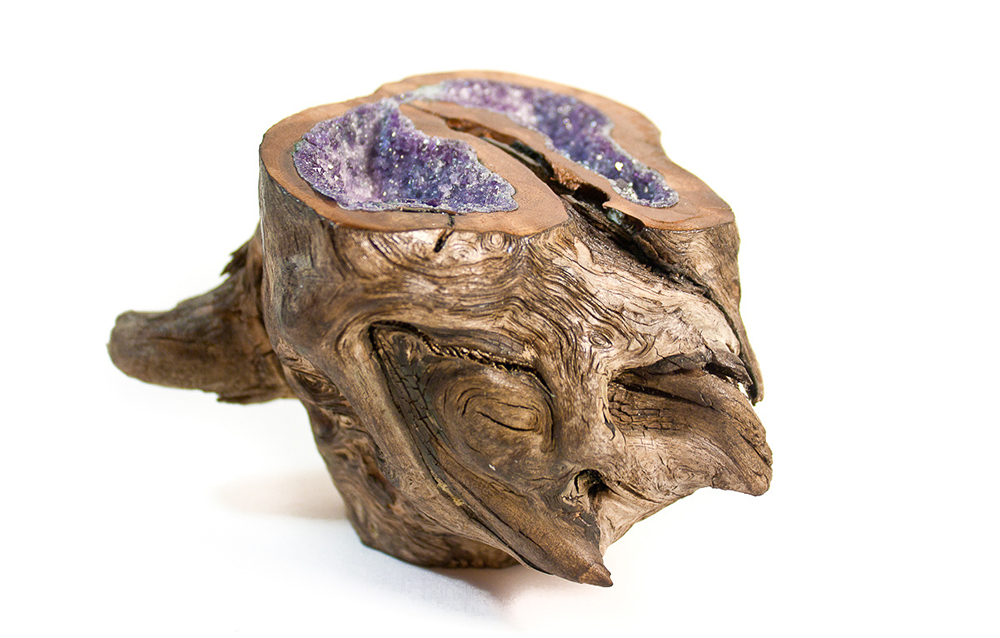 Tell us a little bit about the inspiration behind Geodes.

I have always been a bit of a rock hound and collector of natural things. For years, my brother, father, and I would visit rock dumps and quarries across Southern Ontario in search of various specimens. This curiosity in finding geological wonders and transforming natural objects informed my fascination with alchemical artistic processes. Roughly seven years ago, during my time at the University of Guelph, I began a project involving foraging for sources of colour from the surrounding environment. This came from an impulse to connect with my materials. As I learned more about traditional dyeing techniques and the variety of chemicals and additives needed to fix colour to both paper and fabric, my dye experiments began forming crystals and other odd reactions on paper. These initial discoveries and happy accidents lead to further projects using chemical salts and cultivating crystals that define my practice today. 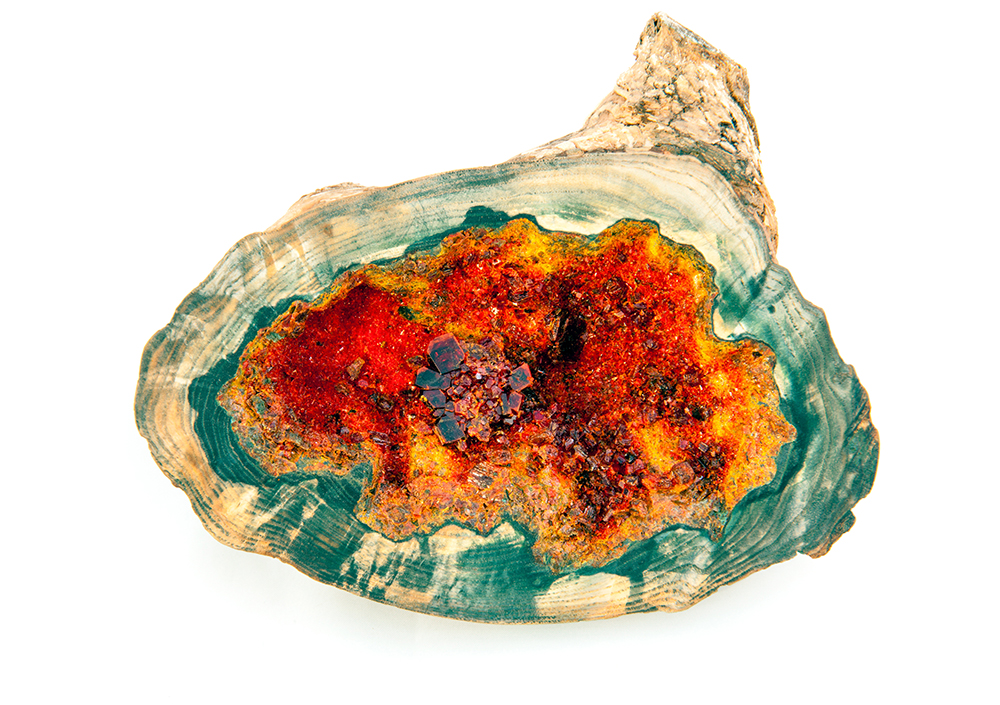 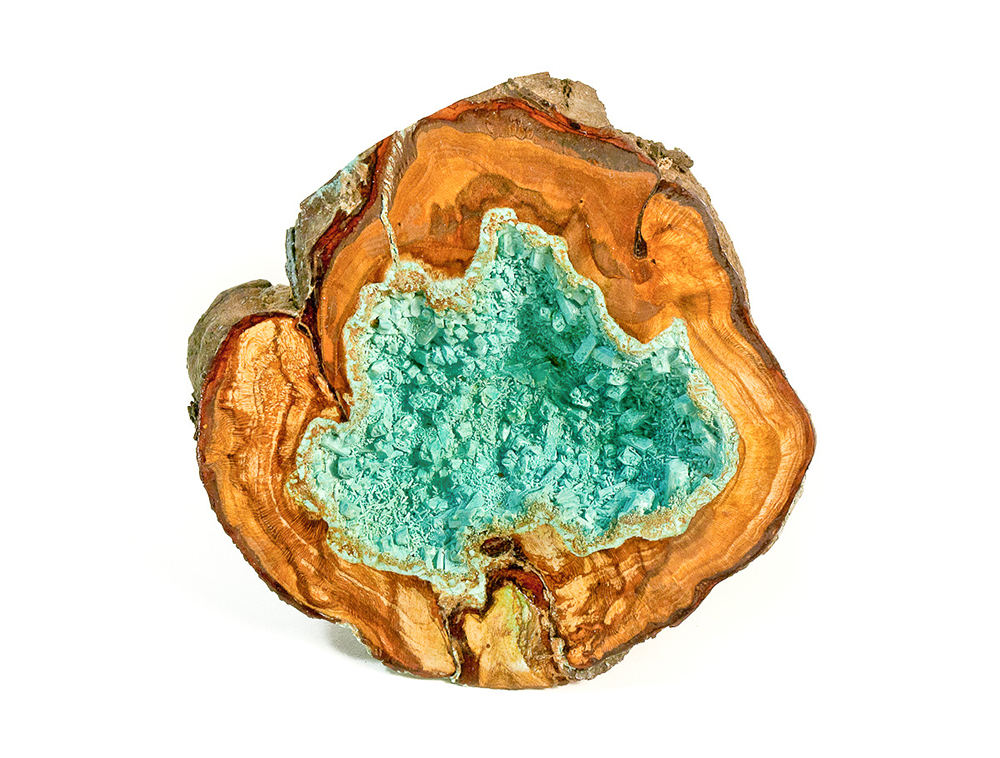 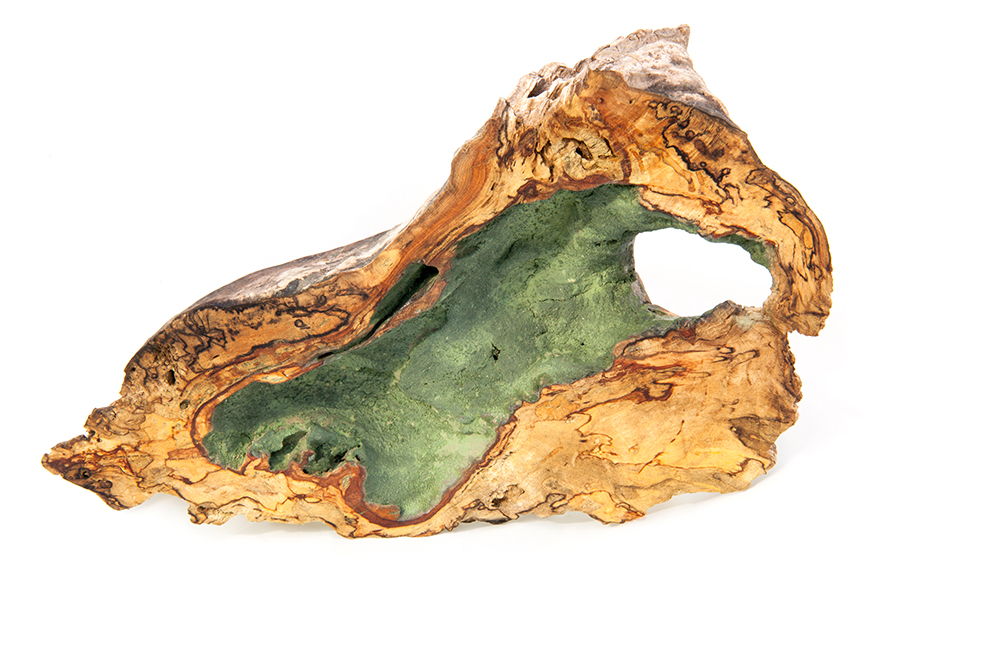 Can you describe your overall process and also some details about creating Found Geode #26?

I explore the implications of using both craft methodologies and various scientific processes to realize these works.  I simulate the natural processes of erosion with woodworking, through reductive carving and other techniques.  I then add industrial chemicals to suggest sedimentary growths and mineral deposits.  These saturated solutions then deposit crystalline formations over the course of several weeks to months mimicking the natural formation of geodes. Found Geode #26 was a piece created and carved in late 2015 out of a pine burl found during a hike on Vancouver Island.  I initially grew tri-sodium phosphate crystals in the void, but replaced them with Mohr’s salts last year after revisiting the piece. Over time, some crystalline deposits will break down and change (some for better, others for worse). Found Geode #26 has existed in two iterations and is one of the only pieces that has been redeveloped with different chemistry. 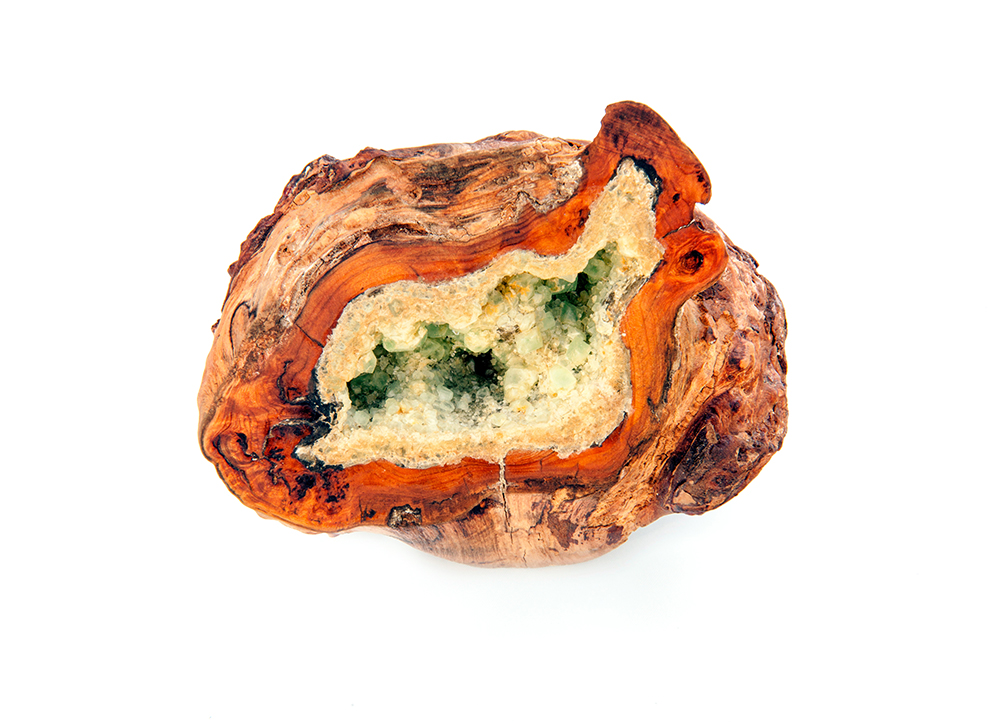 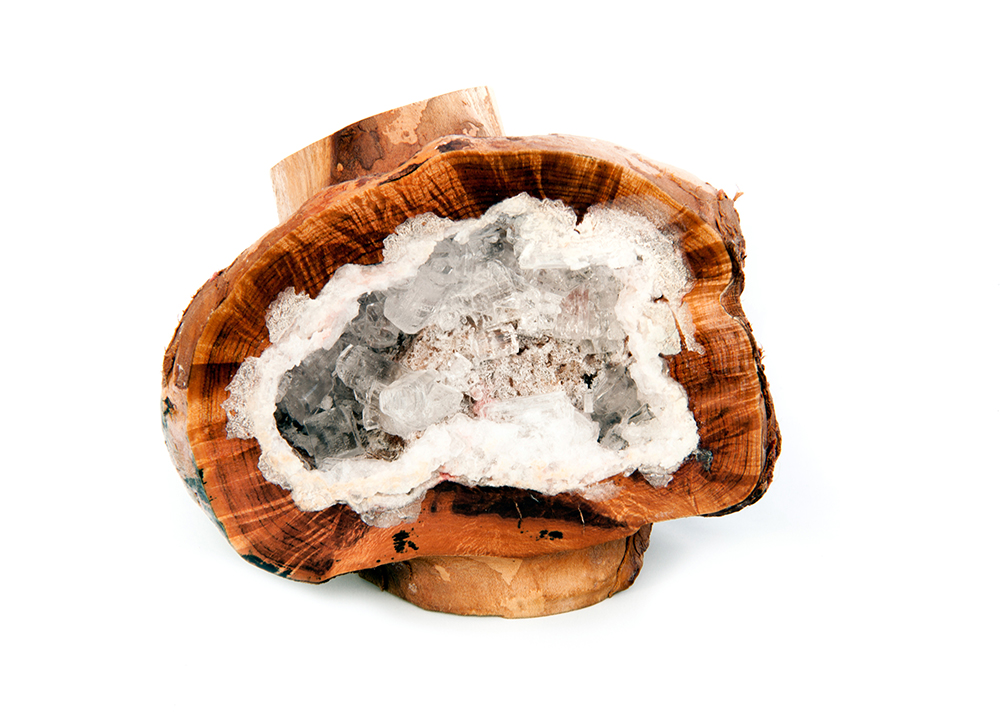 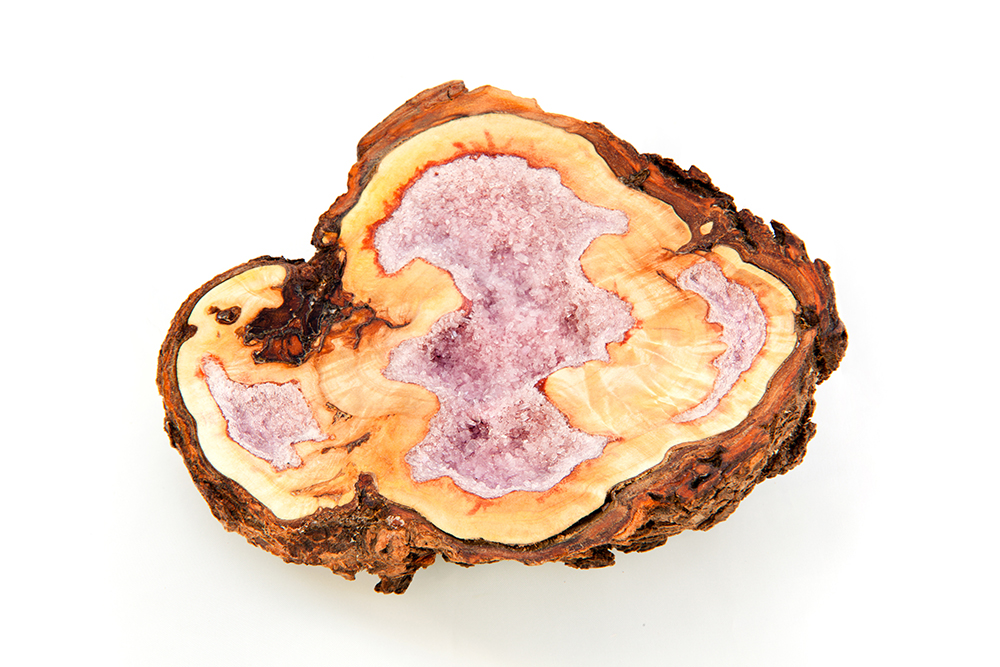 Which piece was your favourite to create and why?

This is a tough question. There is quite a bit of labour that goes into preparing the wood, and there is an uneasy moment when adding multiple chemical solutions to the piece. That’s when the material takes over and I relinquish the control over the final product. Once each work is finished, I drain the solution and the crystals are revealed and the work is either successful or a new attempt needs to be made. In particular, I quite enjoyed working on Geodes #13, #14 and #15.  At the time these were the largest pieces I had to carve. I was working towards a group show in Cambridge, Ontario and came across large and dramatic formations of Black Oak and Black Willow not far from where I live. The wood material was challenging to work with and I was surprised by the resulting crystal growths for each of the works in the initial solution. 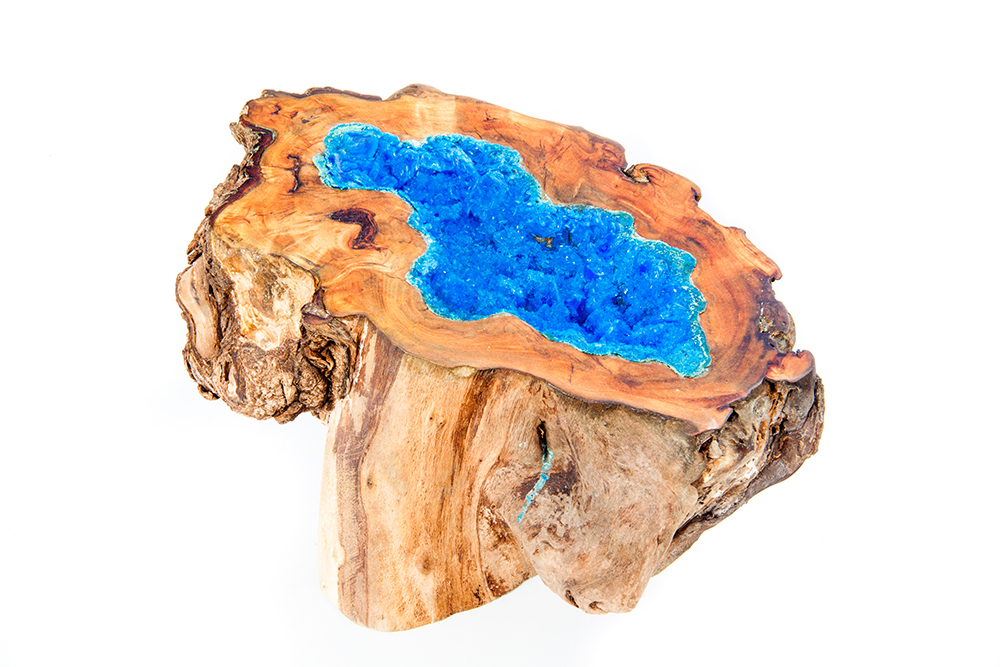 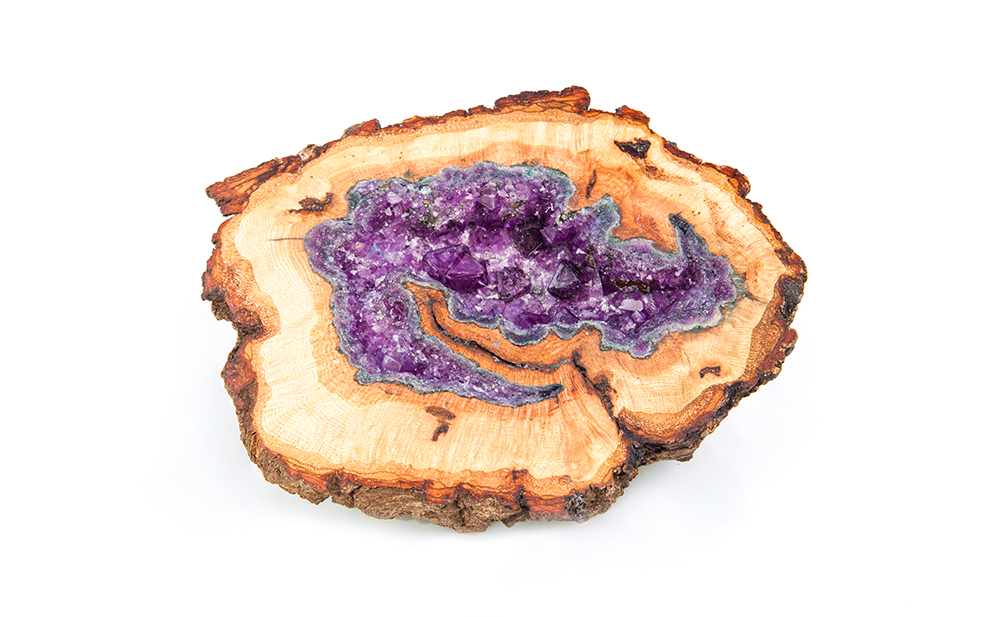 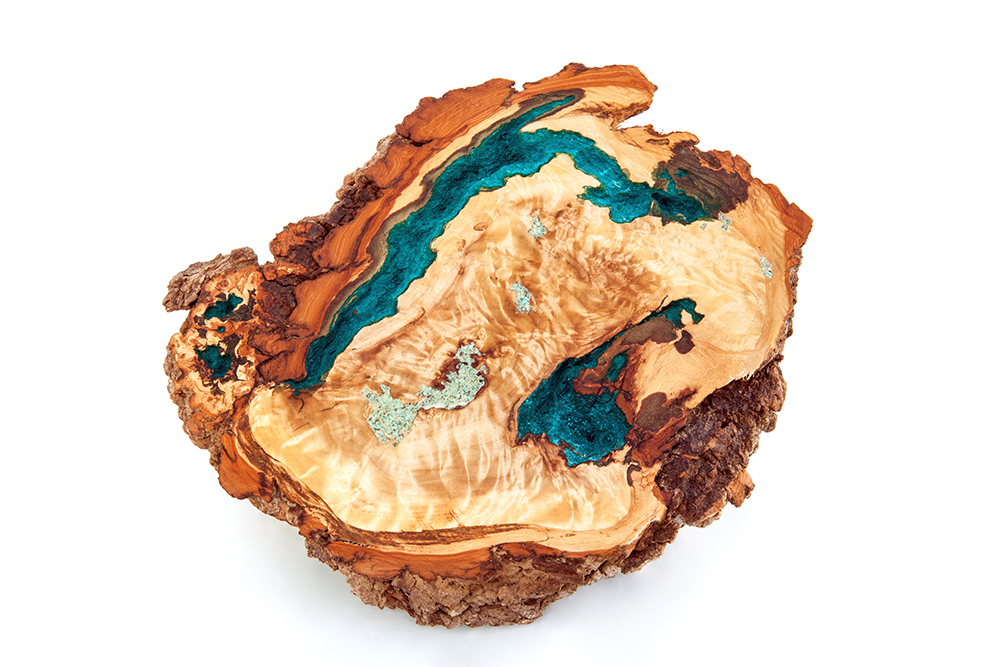 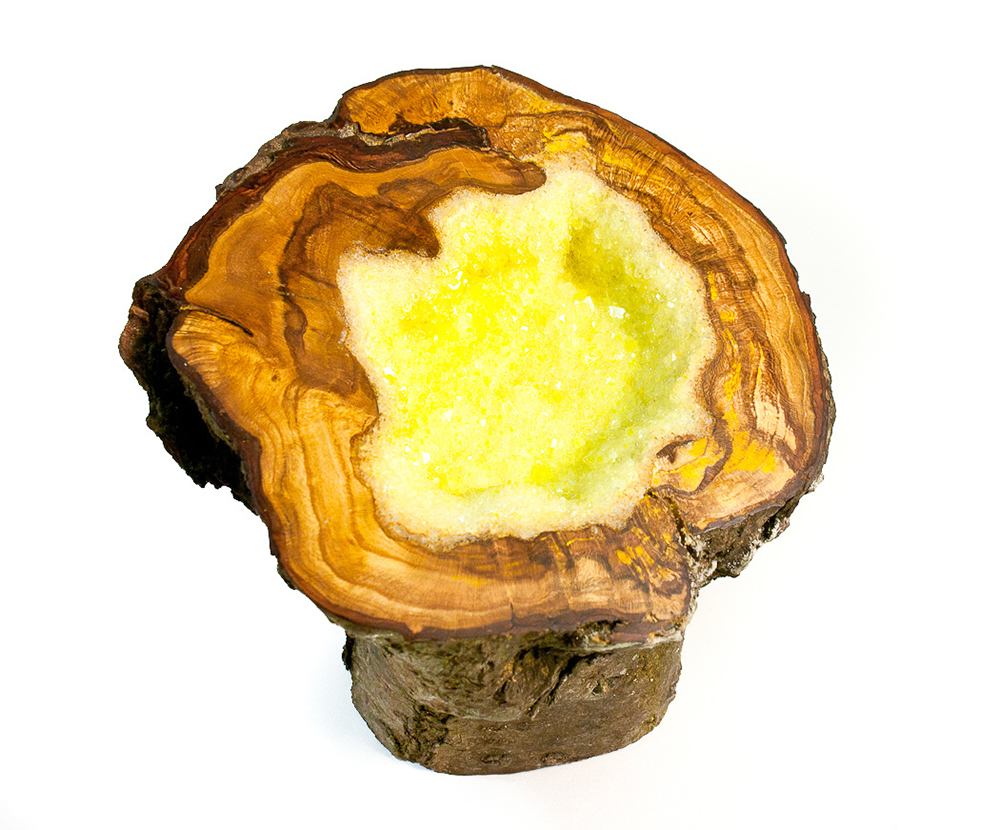 Heisenberg’s Folly has a different aesthetic and name from the rest, can you tell us more about it?

This smaller piece was created with bitumen, likely a piece of road waste. It was part of a newer body of work with growing drusey (masses of small crystalline growths) on a manufactured substrate rather manipulating carving wood to resemble geodes. The title came about as a cheeky nod to Bryan Cranston’s character on the show Breaking Bad. This is a comparison some of my colleagues have made when encountering the vivid blue copper sulfate crystals in that they resemble the “Heisenberg Blue” methamphetamine crystals from the show. I try to incorporate a bit of humour in the project where I can. So, ultimately, the title was meant to re-direct the viewer to theatrical elements of my project rather than reference quantum mechanics or the uncertainty principle. 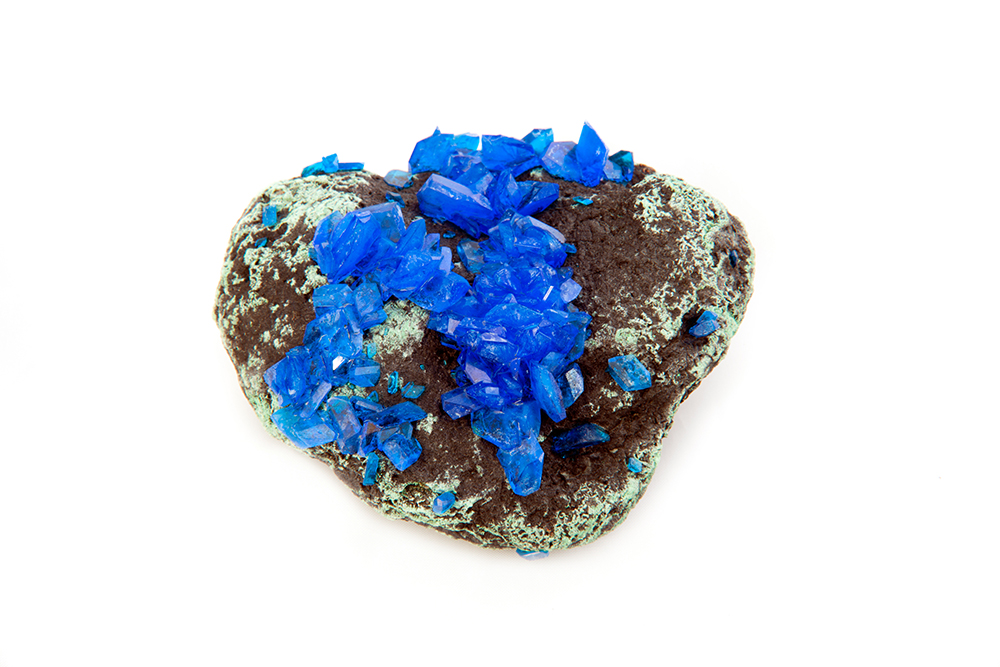