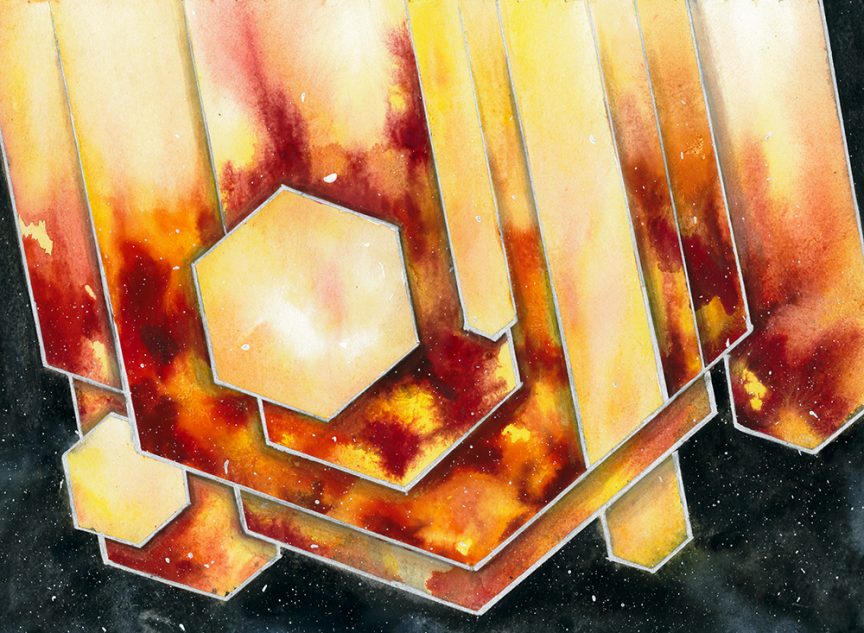 Antonio Holguin is an artist and designer based in Seattle, Washington. His watercolour series Cosmic Cathedral fuses astronomy, Greek mythology, and geometry together, creating window-like portals into an imagined universe.

What was the inspiration behind the Cosmic Cathedral series?

Originally, I set out to create my own cosmos. I have a long time fascination with astronomy and have painted space themed work in the past and Cosmic Cathedral is a progression of that previous art work. The first few pieces were named after constellations. The very first purposeful piece in the series was inspired by Orion, because it was winter time and the Orion constellation was visible (cheesy, I know, but true). Since most of the northern hemisphere constellations are named after Greek mythological figures, I turned to their stories to influence each piece in some form or another. Some of the pieces are named after the painting is finished. Most are based on the stories and representations of these deities. 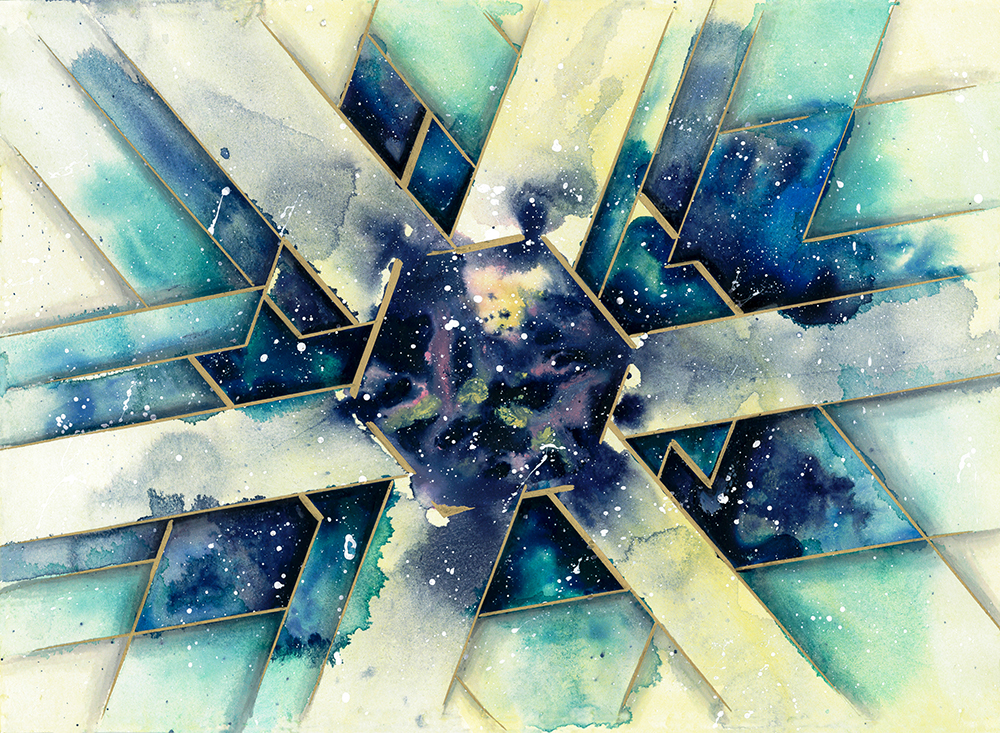 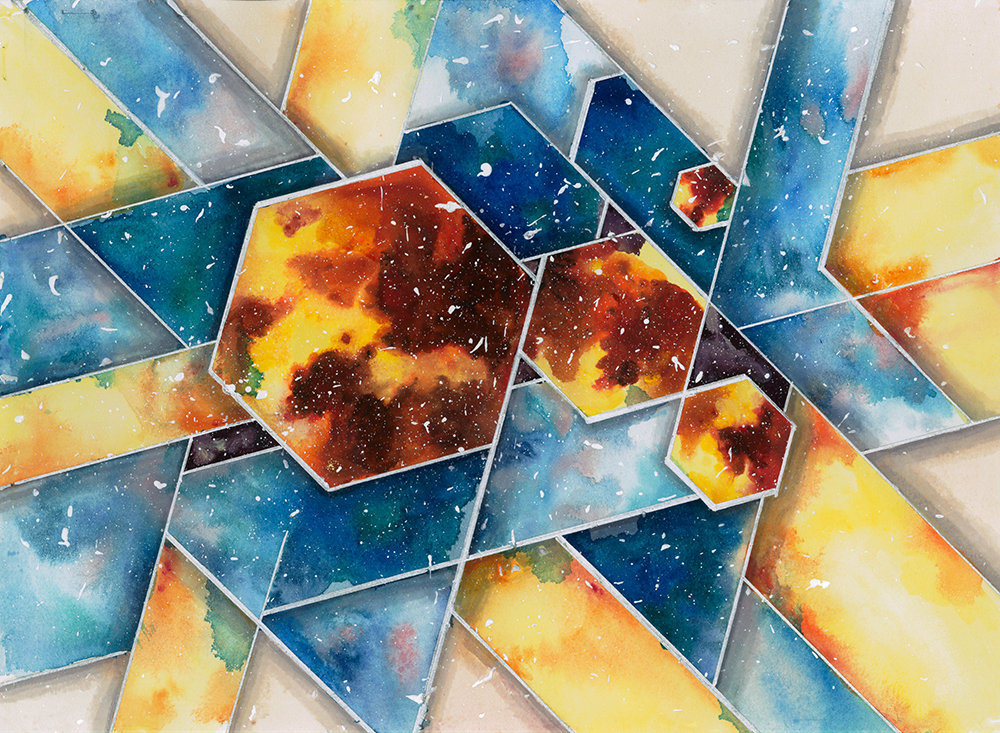 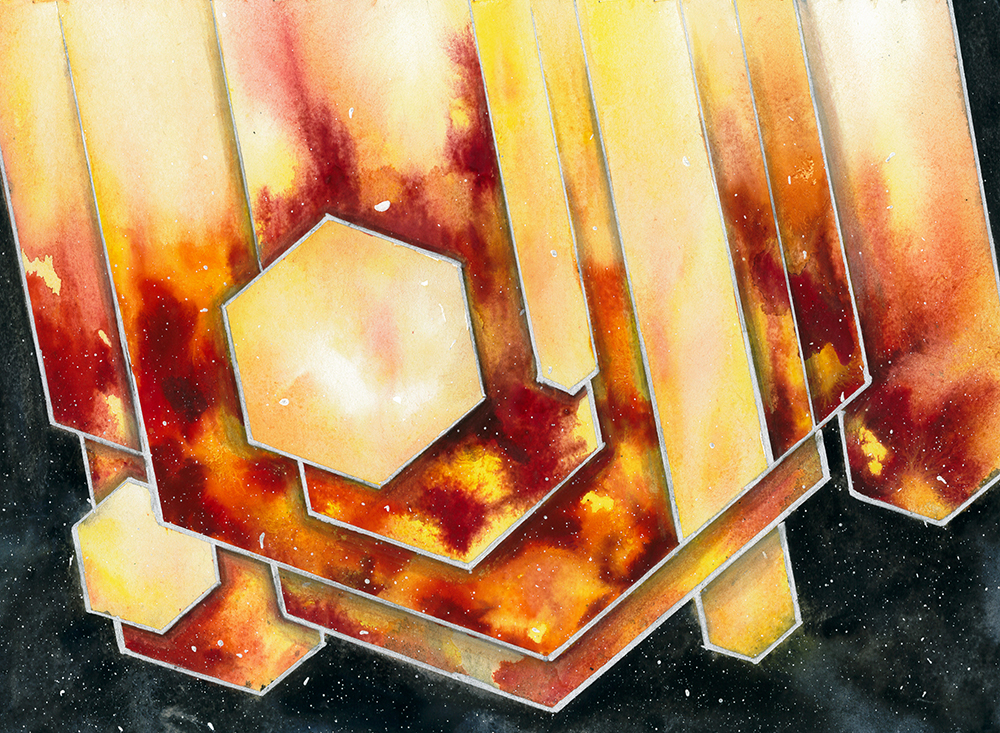 Can you describe your interest in astronomy/physics and how they have influenced this series?

Art has always been my primary passion, and science a very prominent interest. Astronomy, physics, and science in general have fascinated me since I was a kid. In primary school, I would lay on the roof just outside of my bedroom window to watch the moon and stars spin. I would read about Galileo and Newton’s theories on gravity and how it affected the earth and cosmos, then later Einstein’s “Meaning of Relativity.” I remember watching the space shuttles launch on television. When Hubble first started sending back images of distant stars and nebulae, and they were available on the internet, I was awestruck. In art school I created a multi-piece series on large canvases with oil and acrylic, heavily influenced by those Hubble images. That was about 2001 – 2004. For a few years, I put off artwork in favour of building my professional design career. Sometime around 2012 or so, I got back to creating art. I still have one of those Hubble inspired paintings hanging in my house, and I found a CD full of images of all the others. That launched me into wanting to create more astronomy paintings. Through all that time, science was still a vested interest; I watch a lot of space related documentaries, read a ton of astronomy news and articles, and I still can’t keep up with it all. That’s what is so fun about it. The cosmos provides an endless supply of knowledge and art inspiration. 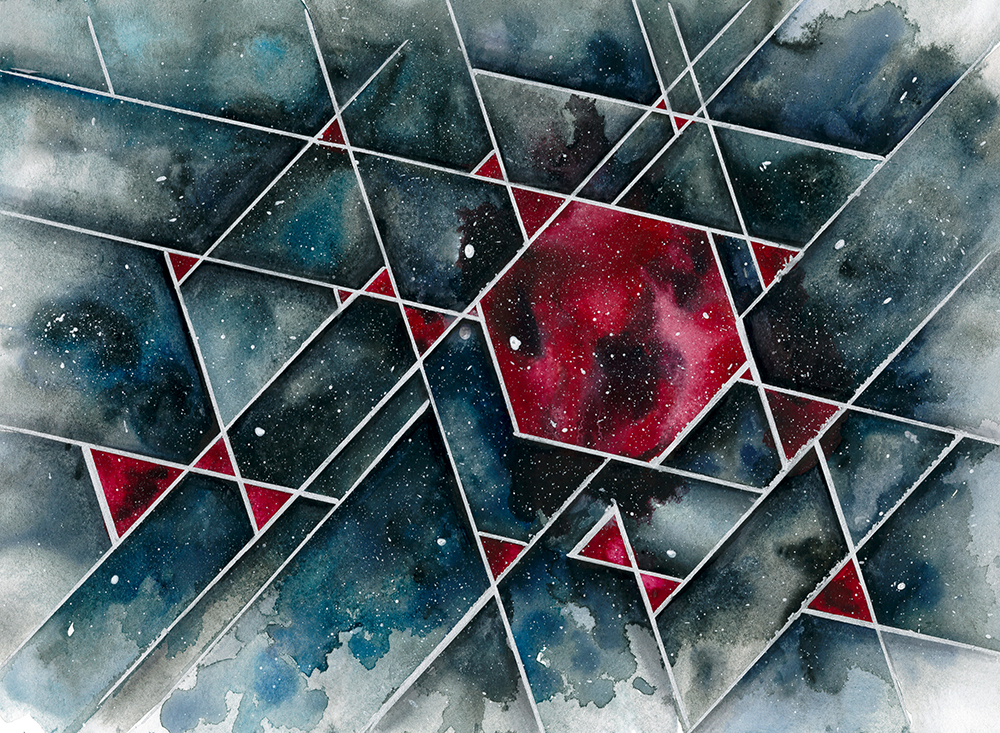 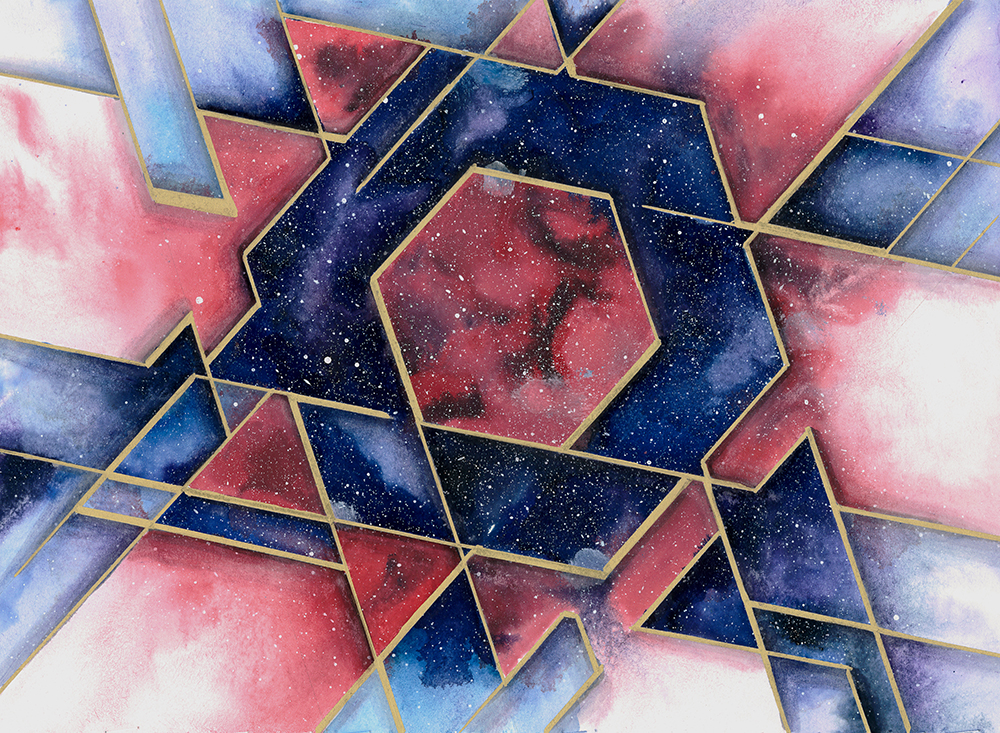 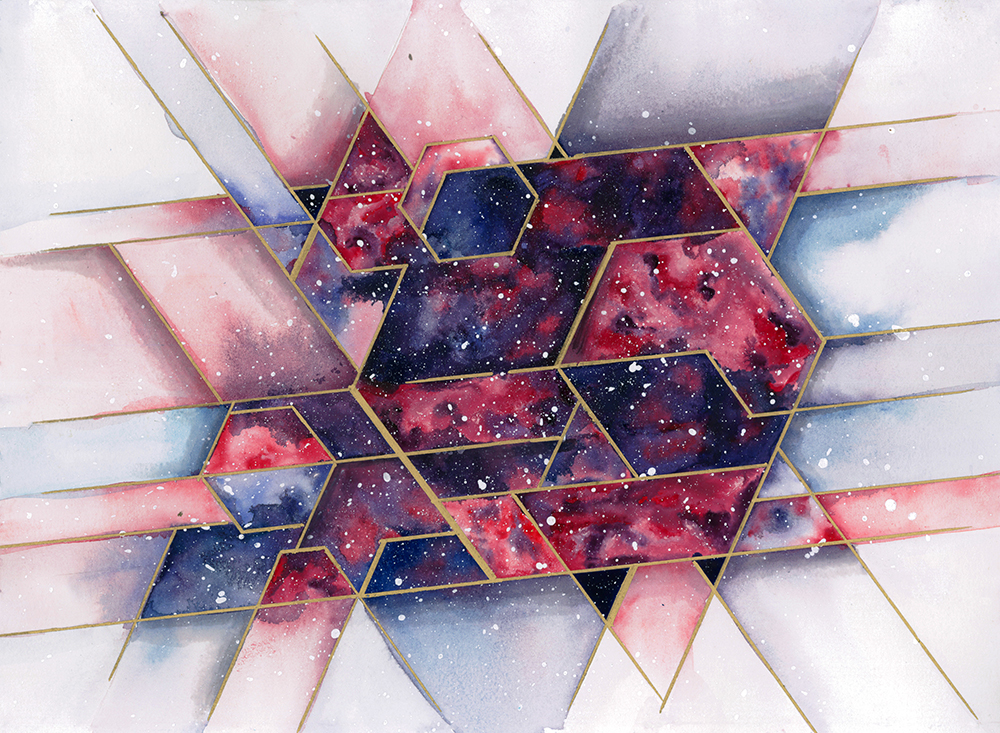 Why did you select watercolour as your medium for these works?

Well, there were a couple of very important reasons. First, my wife and I were going to have a baby. We were living in a 2 bedroom condo at the time. The second bedroom was our arts and crafts office space. I was trying to get back into painting with oil and acrylic, but trying to get them to bleed together to create a nebula effect wasn’t really turning out how I wanted. The supplies were also getting everywhere. When we found out my wife was pregnant, I had to stop using the oils because of the fumes. We had to clean up the room to create a nursery, which meant I had to paint in our tiny dining area. Since acrylics at large size make quite a mess too, I couldn’t use those. I had to work smaller and find a medium that didn’t make as much of a mess, was easier to clean and put away, and was non toxic. So I started playing with watercolours. When I really started to push the paint and water around, I could finally get the cloudy nebula look that started to define the series. 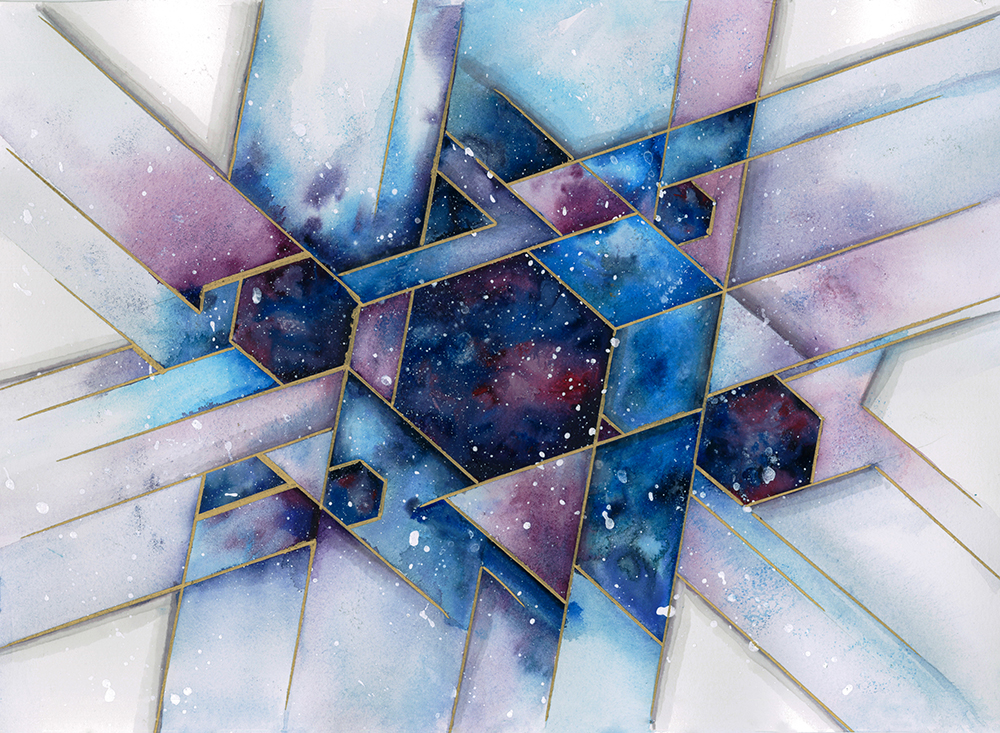 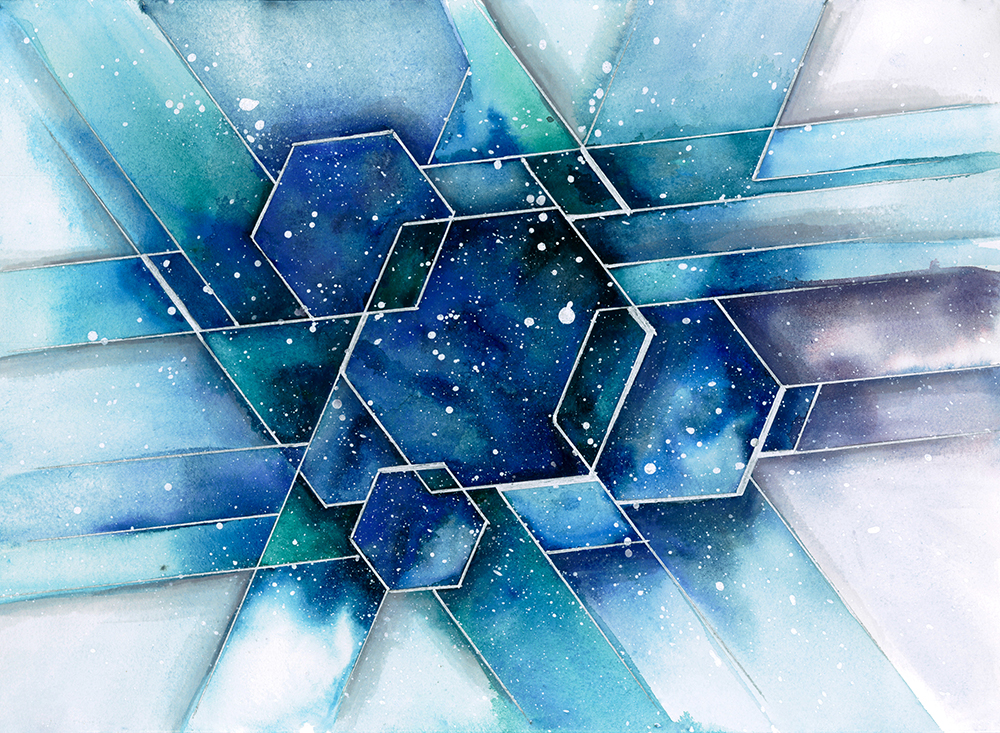 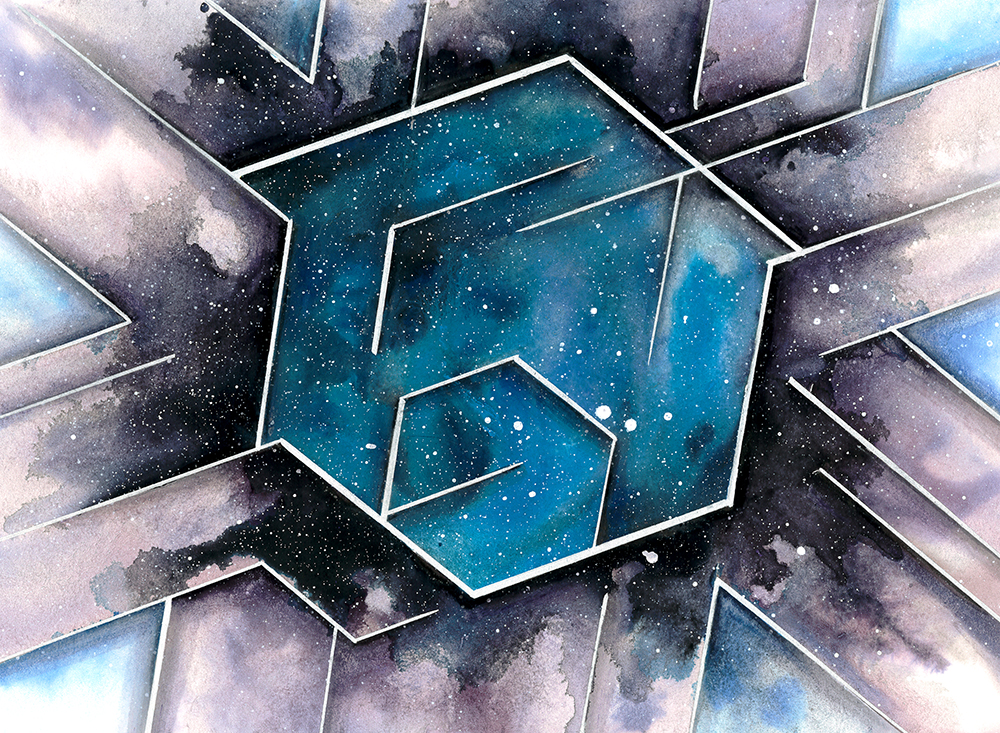 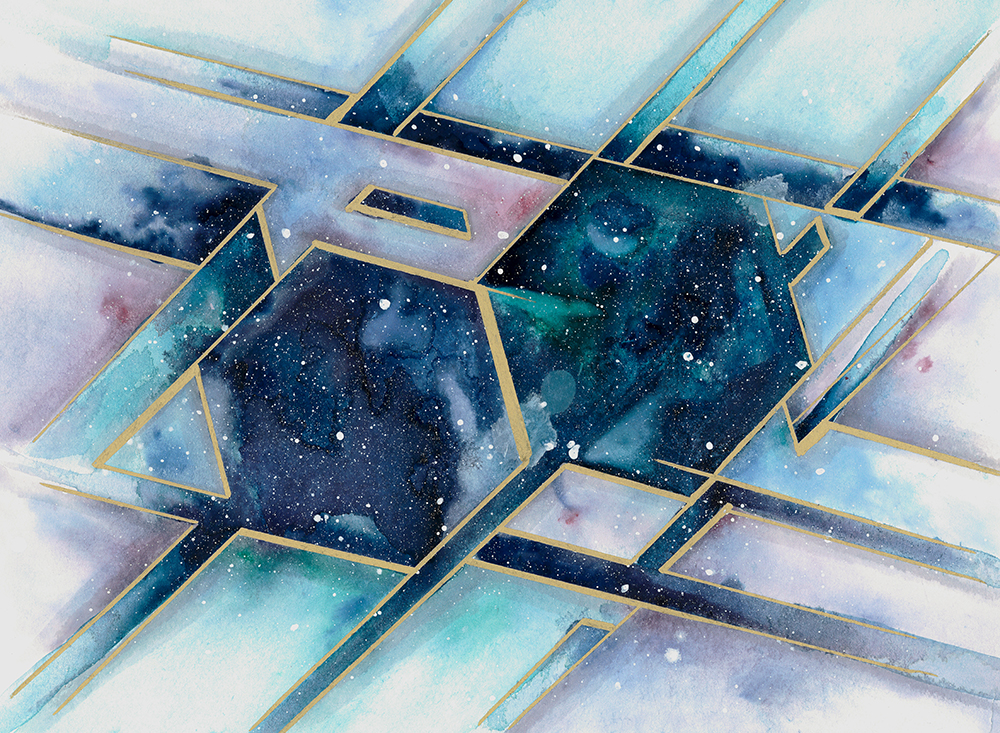 The overall aesthetic of Cosmic Cathedral has a geometric quality, how did you arrive at the spatial orientation for these works?

I have read a lot of artist interviews and statements where they try to find some justification in everything they create; linking back to some detail or metaphor to give reason to making certain lines, colours, or shapes. Not that they don’t have specific reasoning behind their art, but this series did not start off that way. In my case, the geometry in Cosmic Cathedral happened by circumstance. Really, when I started playing with watercolours I was trying to conserve paper and paint, so I drew out a bunch of lines and sectioned off areas to test. The aesthetic just kind of stuck. I finished a piece, not related to this series, but closely resembling it – the prequel if you will – and showed it to a few friends. One liked the overall direction of early paintings, so I kept going with it. Another mentioned that it kind of resembled looking at the universe through a stained glass window, like something you might find in a church. “It’s a Cosmic Cathedral,” she said. So I ran with it. I wasn’t satisfied with arbitrary lines defining shape and space, though, so I set some rules in place. One rule was that intersecting lines could only be at 60 or 120 degree angles from each other. This, of course, ends up creating hexagons; creating some fun applications and is relevant to some aspects of science. The mirrors on the James Webb Space Telescope (JWST) are an array of gold plated hexagons. I didn’t purposefully mimic JWST, but it did influence the decision for lines that could possibly create hexagons. In that way, looking at a Cosmic Cathedral piece is representational of looking through JWST. Ultimately, watercolours, lines, and shape gave me a way for me to create my own cosmos. 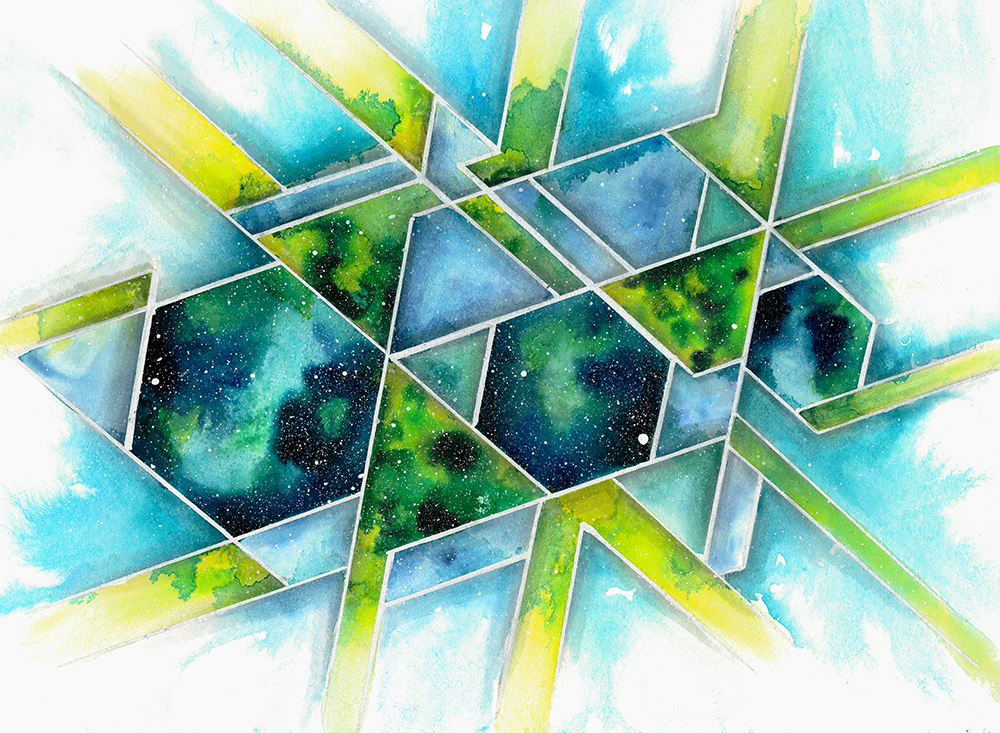 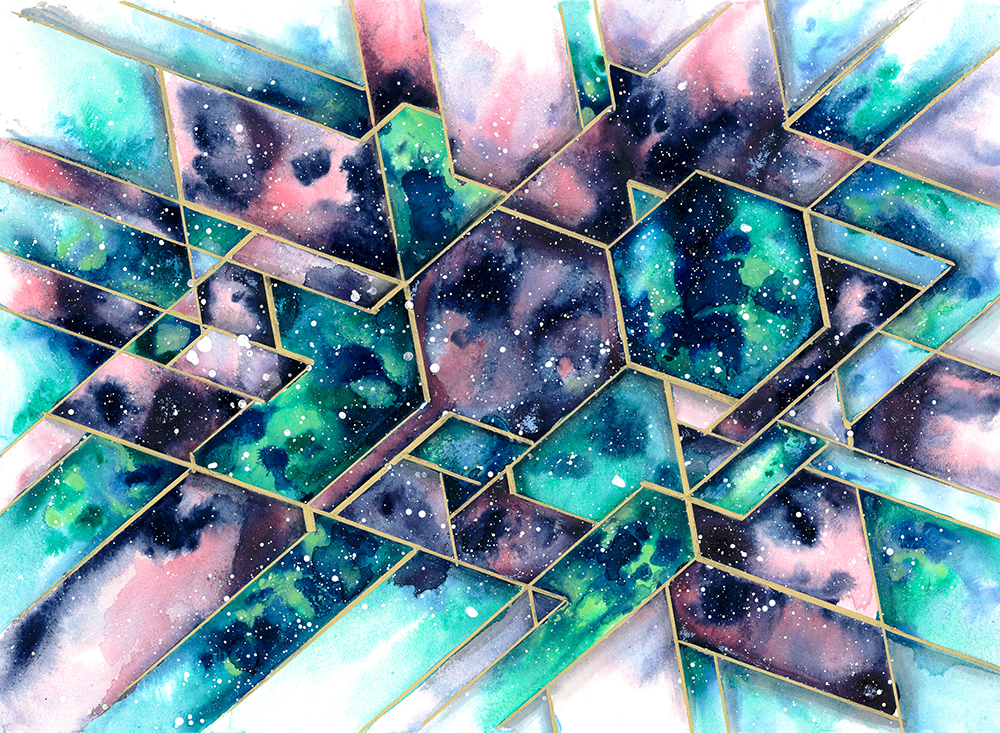 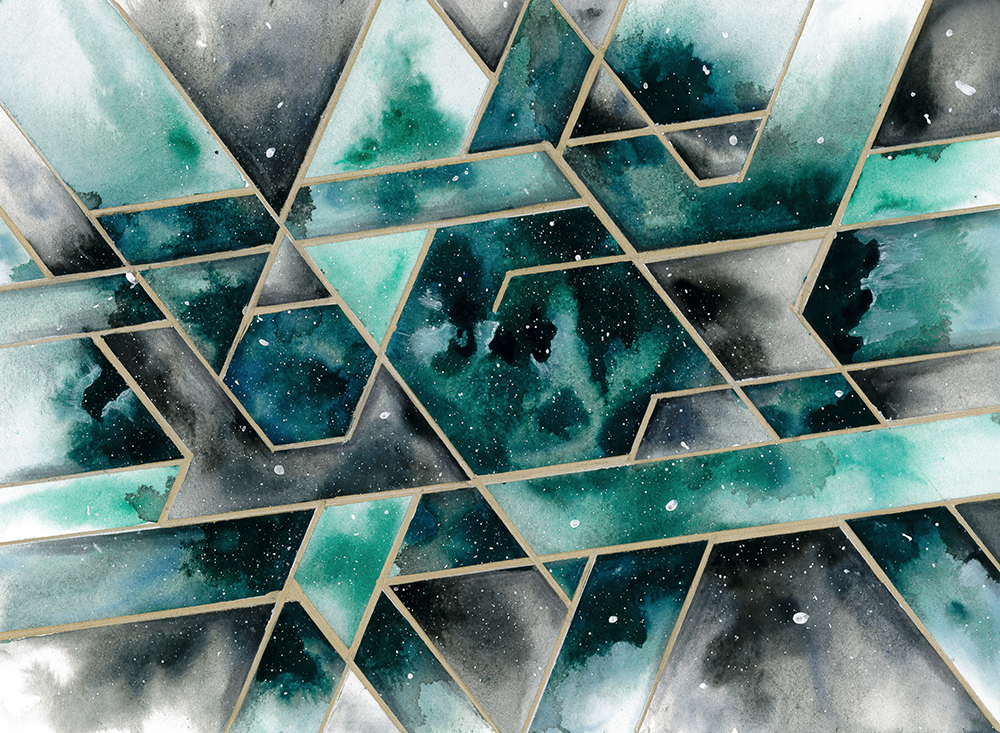