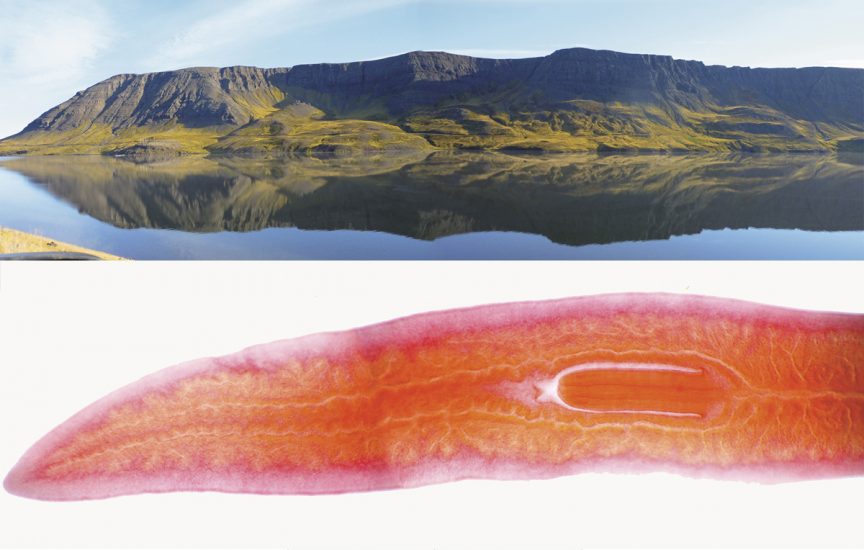 “A visual reading, at the intersection of Science and Art: the communication of scientific data through a photographic narrative of two distinct journeys into the tissues of life, one on a macro scale in Iceland, and the other one on a microscopic scale at the SVA NATLAB in New York.” – Hiba Farran

Can you describe how you got the idea to pair microscopic images with landscape photography?

During my BioArt summer residency at the School of Visual Arts in New York, I experimented with microscopic photography, taking random and spontaneous pictures of micro-organisms under the lens of my microscope. I tried various sections and technical features throughout this photographic process. Once done with ‘the fun of it’, I looked at all the shots at once, when it occurred to me that I had previously seen similar textures and visual compositions in spontaneous snapshots of landscapes I had taken a few years back during a trip to Iceland. The pairing wasn’t preconceived, at least at first, and the matching was a happy coincidence. Soon enough, I found myself trapped in a mesmerizing and exciting visual exercise of matching micro and macro tissues of life.

What was the most difficult part of your creative process?

The process of cropping the images to the desired sections was a task that demanded attention and a critical eye. Cropping the snapshots was my personal intervention on the photos, it was ‘my say’ in the similarities that I found. Whereas taking the snapshots themselves was an un-calculated, almost accidental process driven by my curiosity of similarities between micro and macro shots.

Composing these pairs of photos felt like writing a statement, highlighting a finding, telling a story, showing evidence. Highlighting in visual art what the scientific images ‘spoke of’ felt like revealing hidden meanings. I had to find the right balance between the art and the science of this process. 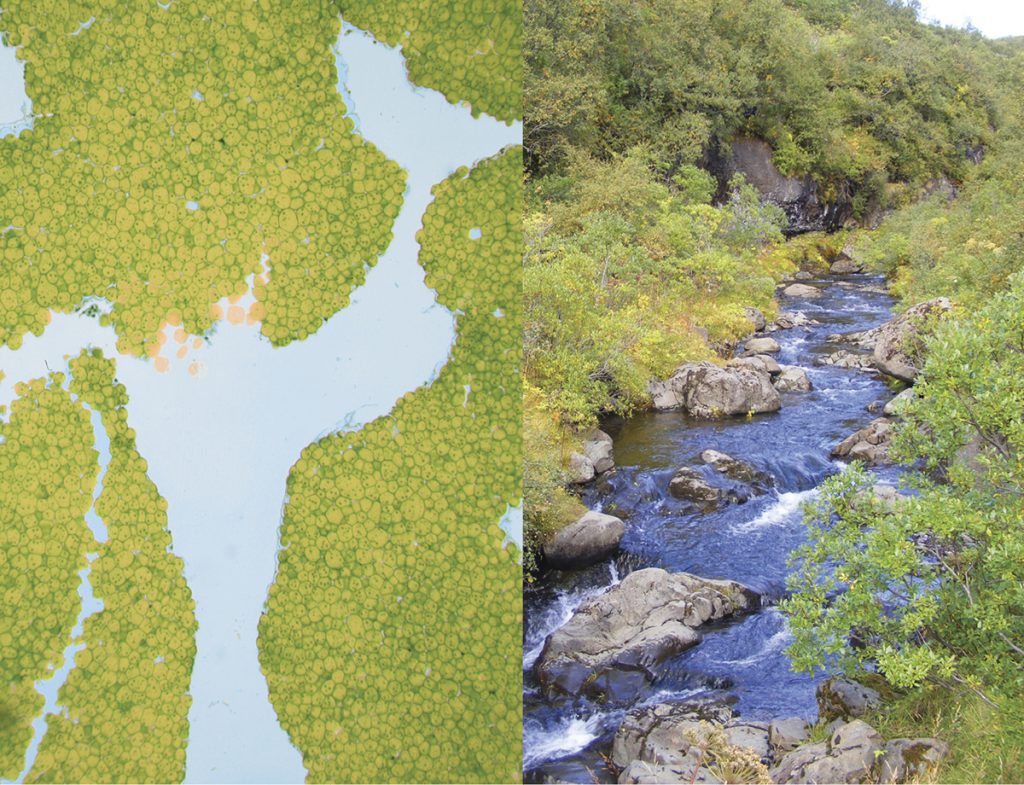 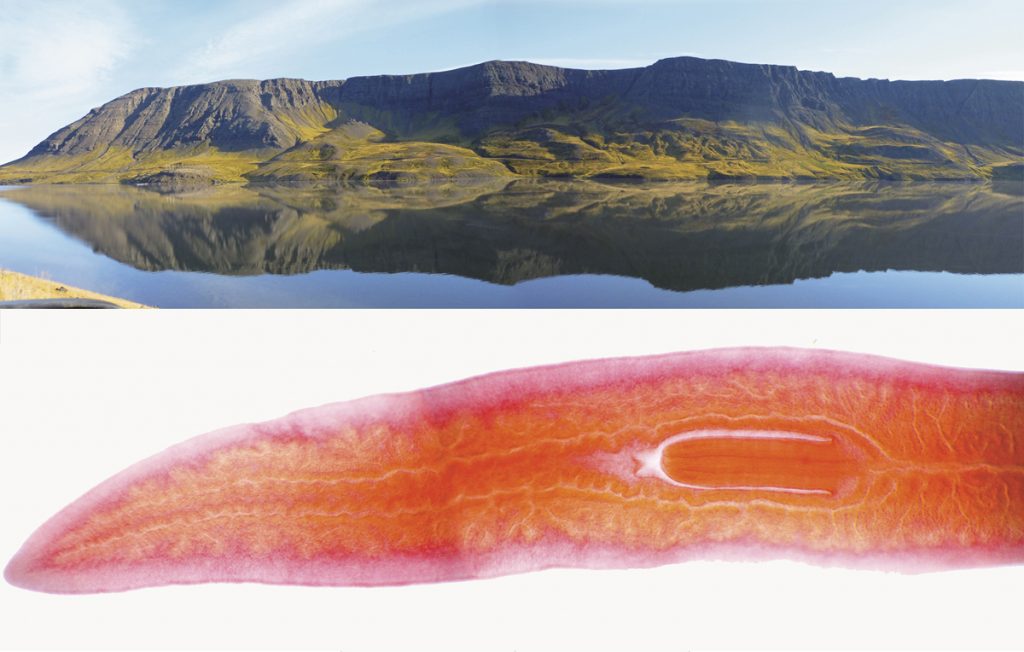 What surprised you the most when you first started exploring microscopic images?

Surely what surprised me the most was the amount of details I could see under the microscope. It felt like seeing another dimension of life, a revelation of secrets, reading an inscription that coded the matter of life, one code that underlines macro-landscapes and micro-tissues.

This comparison blurred the line between living/non-living organisms. Rocks and mountains have a life of their own, and just like micro-organisms throughout their formations and textures speak a coded language. 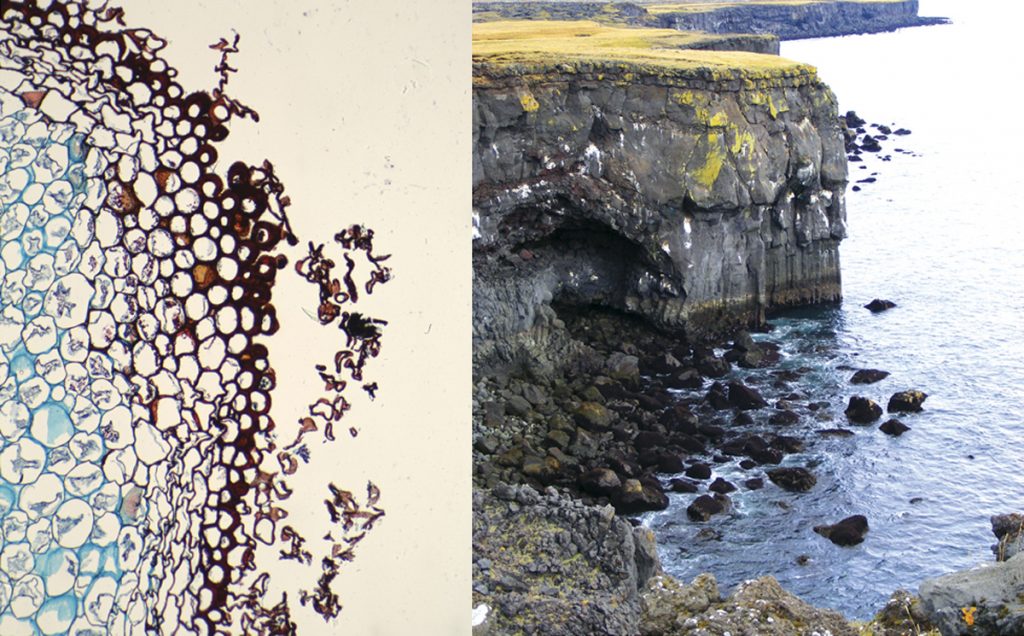 Would you consider a follow-up series exploring other countries given the diverse geological composition of our planet?

I guess the message behind this project is the universality of life; a one structural organization of things that underlies all existence. It doesn’t matter whether the landscapes were those in Iceland or elsewhere, or whether the micro-shots are those of these specific micro-organisms. The message would remain the same. However, a deeper exploration of this line of thought would be to explore unity, or difference, beyond structural features in the process of how things are generated. I am now interested in comparing identical or different threads of generation, instead of end results.