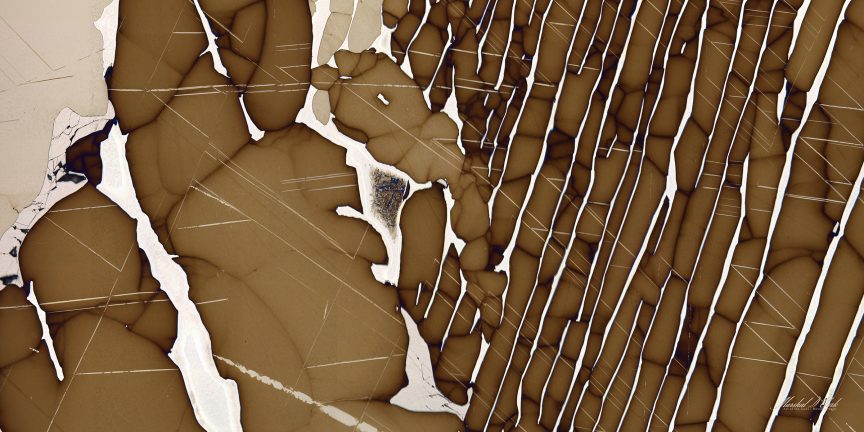 Marshal Clark is a metallurgical engineer who studies the microstructures of metals. After being struck by their beauty during graduate school, he began capturing images of these structures as metal prints.

In this interview with Art the Science, Clark discusses his passion for studying metals, the beauty of their microstructures, and the process of creating metal prints.

Why have you named your collection Art of the Gods?

I have always been fascinated about the historical developments in the use of metals.

Early humans had limited access to metals. Copper, gold, and silver were available in a native form, but while these metals were easy to hammer into shape (cold work), they were soft and didn’t make very good tools. We eventually learned to extract copper and tin from ores (the heat of a well built-up campfire with a hot bed of coals is enough to extract copper and tin), and thus we developed bronze. While an improvement, bronze still doesn’t hold a sharp edge.

Prior to the iron age, when we learned to increase the heat of furnaces by the introduction of air, we could not extract iron from ore. With the exception of two known sources of naturally occurring telluric iron, the only iron available to humans came from meteorites. It is believed the name iron comes from the Celtic isarnon which meant “holy metal,” and the earliest names in other languages are generally translated to mean “stone (or hard substance) from heaven,” “star metal,” or similar meanings. Long before they were discovered by European explorers and colonists, iron meteorites such as the Toluca from Mexico and the Gibeon from Namibia were known to the native peoples and used for the manufacture of agricultural implements and weapons.

“The microstructures of the meteorites cannot be replicated on Earth. They are truly the art of the creation of our solar system.”

Meteoric iron is unique and represents some of the oldest materials on the earth’s surface. This iron formed in the cores of small planet-like asteroids some 4.5 billion years ago, and owing to the extremely slow cooling rates (a few degrees per 100,000 to 1,000,000 years), the microstructures of the meteorites cannot be replicated on Earth. They are truly the art of the creation of our solar system.

What inspired you to capture images of iron meteorite microstructures and display them as art?

I have always found the microstructure of metals to be intricate and beautiful. While macroscopically, metals appear homogeneous, at a microstructural level, they are comprised of individual crystals with different orientations and even different chemical compositions (phases). As a metallurgical engineer, we attempt to understand how the arrangement of these structures affects the properties and mechanical behavior. In fact, the purpose of cold working and heat treating metals are the means by which we affect the arrangement of the various structures and thus change the properties.

However, I think I really became fascinated with how beautiful the arrangements of the different phases and structures could be when I went back to study for my doctorate. My research involved the development and the microstructural characterization of weld filler metals for welding high strength low alloy steels (HSLA). Alloy developers had learned to produce HSLA steels with high strength and excellent toughness (resistance to brittle fracture), but the development of suitable weld filler metals lagged. To assist with characterizing the microstructures of HSLA welds, I began to use tint etchants, which aided in identifying the various phases based upon the colour of the constituent. At the time, however, the only practical means of documenting the microstructures was the use of 4″ x 5″ Polaroid film. The cost of colour film was much more and often provided less than perfect results. Therefore, almost everything was documented using black-and-white film (Polaroid Type 55).

By the early 2000s, digital microscope cameras became practical, making the documentation of colour images much simpler. Then in 2013, George Vander Voort, a preeminent metallographer, published several articles where he had used a range of etchants, including tint etchants, to examine the structures of meteorites. The images were gorgeous, so I began to research the topic and to obtain various meteorites for experimentation. While all iron meteorites are alloys of iron and nickel, the percentage of nickel and other elements (i.e., phosphorous, sulfur, carbon and other minor additions) varies, resulting in significant variation in the percentages and arrangements of the various phases and constituents. Some produce relatively simple structures and etch in tans and browns, others have extremely complex structures which tint to produce whites (unaffected taenite), tans, browns and blues.

Initially I produce small images and printed them on coffee mugs with my consulting business logo, handing them out when I gave training. I made a few larger images and made them into posters, but it wasn’t until I visited an art gallery and saw landscape photographs as metal prints that I really began to consider creating artistic prints of the meteoritic structures. The intense vibrance, rich colours, and high contrast of metal prints are perfect for these images.

What is the process of creating the metal prints, and what tools do you use?

One of the first questions I frequently get asked is whether I hunt and find my own meteorites. I do not. I purchase the meteorites (usually slices) from established collectors. To prepare the samples for examination, I mount the slices in a cold-cured mounting epoxy. Because meteorites often exhibit small cracks, I use a vacuum impregnation chamber to remove trapped air and fill open pores and cavities with the epoxy.

I am an old-style metallurgist and use manual sample preparation techniques. I first wet grind the samples using various grits of SiC sanding papers (down through 600 grit). I then polish the samples to a mirror finish using glycol-based diamond suspensions (through 0.25 mm). The samples are first etched with a 3% nital (3% nitric acid in ethanol) to provide some relief to the surface and then tint etched. While there are a number of tint etch compositions, I most commonly use Beraha’s 10/3 reagent (10g sodium thiosulfate and 3g potassium metabisulfite dissolved in 100 ml water). Anyone who tries this should first learn metallographic sample preparation techniques and how to safely and ecologically handle and store these chemicals.

“I am an old-style metallurgist”

Metallography is the study of the microstructure of metal alloys. Brightfield metallography relies on collecting a reflected light image from a prepared sample. Flat areas appear bright, and areas with relief (either concave or convex) scatter the light and appear dark. Because the samples have been relief etched, features such as grain and phase boundaries, Neuman bands, inclusions, and cracks appear dark. Tint etching chemically deposits stable coloured films on the sample surface. The colours of these interference films are a function of the crystal orientation and phase composition. For iron meteorites, taenite (the nickel rich iron phase) does not tint and appears white; however, kamacite, the nickel poor phase, readily accepts the interference films and develops a range of colours from tan through blue. The complex shapes and colours observed in my images represent two phase mixtures of kamacite and taenite, which is referred to as plessite.

DIC (also known as Nomarski contrast) is a technique which helps to visualize height differences (produced by the etching or due to hardness differences between the various phases) on the polished and etched sample surface. DIC uses a Wollaston prism together with a polarizer and analyzer to produce interference between two light waves that have been split by the prism. The interference between the two light paths results in variations in colour (it is a false colour image) and texture.

Individual digital images do not contain sufficient information to produce large metal prints. Typically, photographs are printed at 300 dpi and at this resolution the largest image would only be a little larger than 7″ x 9″. To produce an image suitable for large metal prints, a “live-tiled” image is constructed by rastering across the sample surface to produce a larger image. Often, the files produced take an hour or two to construct and contain 500 MB to 1.5 GB of information. The final image is produced using Photoshop.

How does your art influence your work as a metallurgical engineer, and vice versa?

The Art of the Gods imagery is an outgrowth of my fascination with metallurgy/metallography and my love of science. When we produce metals on earth, the metals solidify and cool over a period of seconds (in the case of welds) to hours or even days (with older steel making practices producing multiple ton ingots). Steels, which are essentially an alloy of iron (Fe), carbon (C), manganese (Mn) and sometimes other additions (including nickel), exhibit metastable structures. True equilibrium cooling conditions for terrestrial steels cannot be obtained—no graduate student will live that long. These equilibrium microstructures do, however, form under the extremely slow cooling rates experienced by meteorites. Some of the structures and even minor phases (such as troilite—FeS—and daubréelite—FeS-Cr2S3) are not found terrestrially.

Other than a personal fascination and passion, working with meteorites expands my metallographic capabilities and provides me with a means to introduce metallurgy to those who would not otherwise be familiar with it. Recently, some personal friends who are passionate about quilting have taken an interest in interpreting the images I produce using their media. I’m excited to see what they come up with.

Do you have a favourite piece in this collection?

There is no single piece that is my favourite but certainly there are some that I personally like much more than others. I am always excited when I find a shape within the structure that reminds me of an animal. I have observed reindeer, pigs with balls in their mouth, horses, eagles, fish, sheep, lizards, and once even found the “Alien.” The other day, my wife found an outstretched arm and hand with four fingers and a thumb. As my other passion is fly fishing, finding a 4.5 billion-year-old fish shape in a meteorite is great.

As a Colorado native, I have recently been interested in developing mountainscapes. I am surrounded by the mountains of western Colorado (the San Juans, Elk Mountains, Cimmarons, Uncompahgre Plateau, and the Grand Mesa), and often I see in meteorites the outlines of snow-capped peaks. Occasionally, the meteorite will have undergone collisions in space, deforming the structures. The resulting deformation looks like the geological features produced in the mountains by the flow (uplift) of the earth’s crust due to plate tectonics.