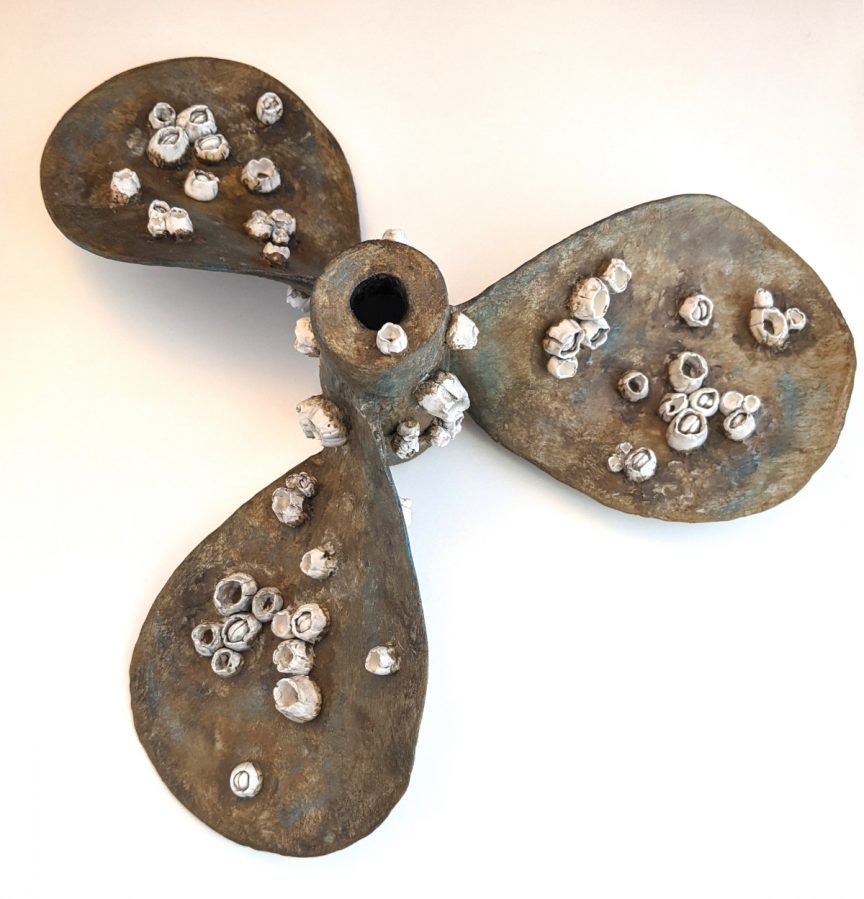 Judith Klausner is a sculptor based in Somerville, Massachusetts who says she “revels in minutiae.” From the insects scurrying on the ground to the medications sitting inside our cabinets, she is inspired by things that are usually dismissed or taken for granted.

In her most recent series, (de)composed, Klausner explores how endings give rise to beginnings. By meticulously sculpting a subject that appears to have “gone bad,” she hopes viewers look beyond their initial gut reactions and find something new. In this interview with Art the Science, Klausner shares how her fascination with the “ruined” began, how she chose the subjects of her sculptures, and the messages that (de)composed carries.

What inspired you to create your new series, (de)composed?

I never set out to make optimistic art, but I seem to have done it despite myself!

This series started with mold. I think mold is physically beautiful and conceptually fascinating. But often, it is hard to look past the disgust and disappointment we feel when we discover it has ruined the food we were counting on for lunch, consider our concerns it has on our health, or even just smell it. I was privileged to grow up with a science teacher mom who, when something went moldy in the fridge, called me over to look at how cool the mold was before throwing it away. I think that shaped a lot of my worldview and my approach to art.

“Much of my artistic practice has been about the beauty to be found in the dismissed or reviled.”

I like the idea of spending hours meticulously crafting something that most people think of as ruined. That labor in itself gives people pause, and in that pause is the chance to notice something new. Much of my artistic practice has been about the beauty to be found in the dismissed or reviled.

How do you choose the individual sculptures to make as a part of this series?

Once I had begun the series, I became a lot more observant about the types of decomposition and energy conversion happening around me. I continue to try to look closer at my environment and ask the people around me to share their observations. My criterion is that the subject of a piece has to be something natural that affects humans in a way we usually perceive as negative. It is interesting how much these negative connotations vary—non-gardeners have no grudge against the hornworm caterpillar, while folks from landlocked areas are unfamiliar with the destruction barnacles wreak on seafarers.

Do you have a favourite sculpture in the (de)composed series?

That’s a hard choice to make, but I think I have to go with Kitchen Garden (Sprouted Potato). It was my first time using a number of new (to me) techniques and materials, and it was really exciting watching them come together into the idea I had in my head. For that reason, I think it was my favorite to make, as well as my favorite finished piece.

Why is this series, and the message it carries, important?

Often, when something has “gone bad,” it has given rise to something new, but it can be hard to appreciate new growth in the shadow of our disappointment. While it may not be the beginning we hoped for, it is a beginning nonetheless. Finding the life amidst the ruin is how we carry on.

This message resonates differently for each person. For many of us, I think it has relevance to our experience of this global pandemic. For me, it also relates to my experience of having an invisible disability. My life has taken a very different course than what I (or the people around me) expected, and that has always been a painful struggle to accept. Over the years I have found a measure of peace by learning to see the value in the life I do have. It may not be what I had pictured for myself, but it is full of its own joy and beauty.

“Often, when something has “gone bad,” it has given rise to something new, but it can be hard to appreciate new growth in the shadow of our disappointment.”

What do you hope viewers take away from (de)composed?

I think my biggest hope is that viewers would come away from (de)composed more open to seeing beauty and growth in things we usually dismiss or find unpalatable.