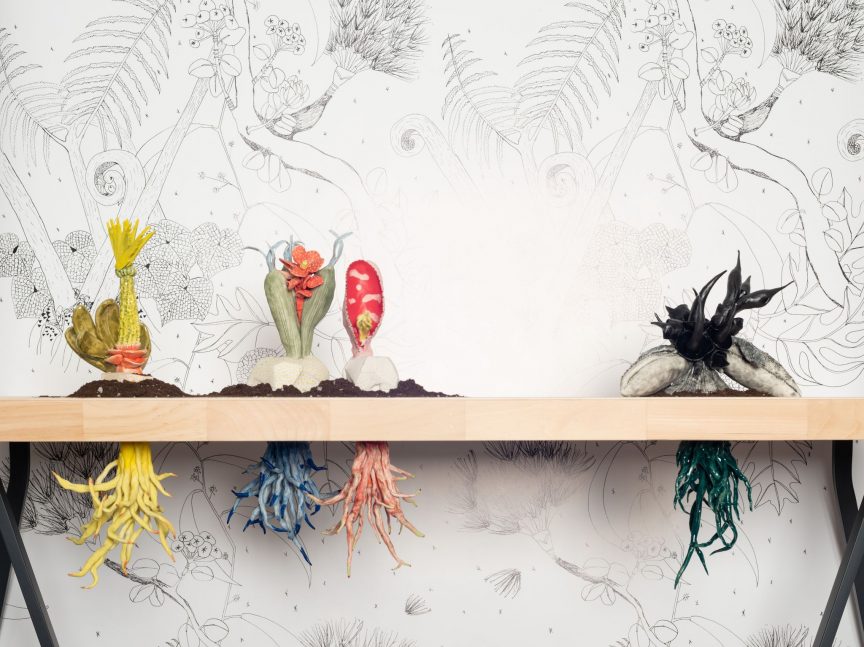 Marney McDiarmid is a ceramic artist based in Kingston, Ontario who takes inspiration from the natural environment. Last year, she traveled to Hawaii to learn about the different islands’ threatened endemic plant species. On the island of Oahu, she met a group of environmentalists who, on a six-acre plot of land in the Manoa Valley, work tirelessly to preserve some of Hawaii’s native plants. In the six years that they have cultivated these plants and protected them from invasive plants and animals, the land has steadily been covered in endemic hāpuʻu tree ferns, flowering koa trees, ʻōhiʻa trees (which are culturally and ecologically significant), and some of the rarest ferns in the world.

In awe of these individuals’ dedication, McDiarmid created the installation Cultivate as a tribute to the protectors of these precious plant species. During March and April 2021, the installation faced a busy street in Kingston to greet eager pedestrians. Through the glass window, visitors peered in to see a cultivation table holding whimsical fictitious plant sculptures backed by a panel of illustrated endemic plants the Hawaiian conservationists are preserving.

In this interview with Art the Science, McDiarmid discusses her interest in the environment, the different elements of her installation, and what the future holds.

What started your interest in Hawaii’s threatened endemic plants? Have you always been interested in endangered plant species and other environmental concerns?

Connection to the natural environment has always been the foundation of my artistic practice. I spend a lot of time outdoors, and since I first started making pots, this has been a huge source of inspiration. In 2014, I visited a friend who was living and working in Brazil and was completely taken over by the fantastical lushness of this tropical environment that was so different from the Canadian boreal forests of home. Flowers, in particular, have been a long-standing fascination of mine because of what they represent as a means of social communication, because they are a source of beauty, and because they function as symbols of femininity, sexuality, and the inner psyche.

In the tropics, the flowers are over the top. Hawaii is a place that represented both my concern for the environment and my creative interest in tropical ecosystems. It is one of the most biologically diverse areas on Earth, yet according to the Hawai’i Strategy for Plant Conservation, native species are particularly under threat: 30% are deemed in danger of extinction.

The back of the Cultivate installation contains a panel with black and white illustrations of native plants, while the focal point is a cultivation table of colourful fictitious plants. Is there a reason for this juxtaposition between the real and fictional plants’ mediums, colours, and focal points?

I wanted the piece to highlight the plants in peril while also speaking to the commitment and imagination of the people trying to preserve them. It is the relationship between these two elements that is the basis of the work. Visiting the Manoa Valley with these environmental activists, I was captivated by the complexity and beauty of the plants and also by the dedication of the people I met. I think of the installation as an ode to both of these things and hope that the interplay between the drawings and the sculptures encourages viewers to consider how we as humans interact with these environments. The site of the installation, in an empty storefront, also really shaped how the work evolved. My sculptural pieces tend to be small, and I didn’t want them to be lost in the space. For a while now, I’ve been wanting to experiment with enlarging my drawings, and this provided the perfect opportunity to do so.

“I think of the installation as an ode to both [the beauty of the plants and the dedication of the people I met] and hope that the interplay between the drawings and the sculptures encourages viewers to consider how we as humans interact with these environments.”

For the cultivation table, why did you decide to sculpt fictitious plants rather than create representations of the endemic plants that the environmentalists are growing?

I wanted to capture the spirit of the work they were doing, and their emotional connection to the place, rather than render the plants specifically. As the piece evolved, the roots became a vital expression of this and ended up being one of the most successful dimensions of the installation. I wanted the sculptures, in their fantasticalness, joyfulness, and reverence, to communicate a sense of what can be possible when we tend to the planet rather than destroy it and to allude to the depth and complexity of what is growing beyond our immediate sight.

“I wanted the sculptures, in their fantasticalness, joyfulness, and reverence, to communicate a sense of what can be possible when we tend to the planet rather than destroy it and to allude to the depth and complexity of what is growing beyond our immediate sight.”

What was your biggest takeaway from your research trip in Oahu and the creation of Cultivate?

That is a hard question to answer. Cultivate is a reflection of just a small part of my trip. While in Oahu, I also met a malacologist (a scientist who studies mollusks) at the Bishop Museum in Honolulu who showed me specimens of snail shells from extinct snails that lived in the Manoa Valley. I followed the history of the hibiscus plant and how its propagation tells the tale of the cultural history of the islands. Part of my desire to go to Hawaii was also to expand my understanding of Indigenous-led conservation and the cultural meanings of flowers. Flowers are an important part of the culture in Hawaii, which is something I’m still exploring.

Will you go on more research trips in the future to learn about conservation projects?

I’m not sure what the future will hold. Like many people, I’m thinking a lot about how to reduce my own negative impact on the climate. There is a lot to explore about our local flora and fauna and the Hawaii trip provided a plethora of creative sparks that I’d like to follow further.

“Part of my desire to go to Hawaii was also to expand my understanding of Indigenous-led conservation and the cultural meanings of flowers.”