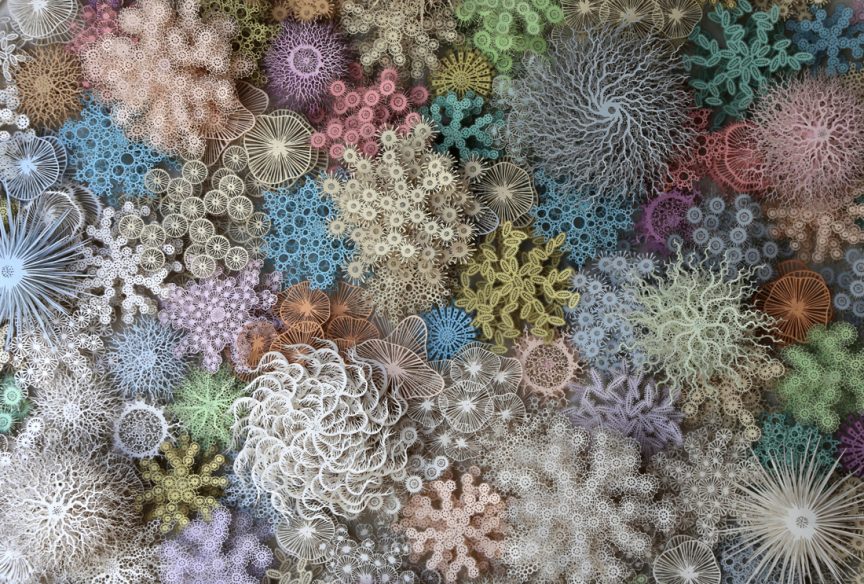 Art came first. I knew by the age of 14 that it was going to be an important part of my life because, simply put, I love making things—the magic of taking something from the imagination and giving it an objective physical reality. Science came later. I chose nature as a subject and realized that I only understood the natural world through the prism of science. As someone from an arts background I was reluctant to accept that truth—to accept that science had shaped my perception of the external world as much as art had. I’ve been trying to bridge these two different ways of seeing ever since.

Microbiology first and foremost; I’m obsessed with cell structures, bacteria, viruses, etc, and with the aesthetics of the microscopy that reveals that hidden universe to us. But I’m also fascinated by atomic physics and quantum mechanics, because they radically alter the way we perceive the physical texture of reality. I’m searching for a visual paradigm that can communicate that new vision.

We live in a world dominated by science and technology. It’s exciting, because it’s a golden age of science. But it’s also bewildering and, to a certain extent, alienating for those of us who are not scientists. We struggle to make sense of the new visions that science offers us—whether it’s of the human microbiome, quantum mechanics, or CRISPR gene editing. My sculptures are the result of that struggle to understand. Inevitably, they mix factual reference and flights of pure imagination.

“We struggle to make sense of the new visions that science offers us…My sculptures are the result of that struggle to understand.”

Paper. I love the simplicity and accessibility of this most banal and quotidian of materials and I love transforming it into something unique and extraordinary. For me the goal of art should be to help people break free from their habitual ways of seeing, so they can appreciate anew the wonders of the world that are right under their noses: the beauty of the bacterial colonies that cover their skin, the surreal drama of the millions of cells splitting in two and dividing every moment in order to replenish their bodies…

I think exhibiting last year at Sotheby’s New York office next to the papers of Nobel Prize winning physicist Richard Feynman was a special moment. Feynman is a hero of mine, because, although a brilliant scientist, he took delight in communicating complex physics in very simple and accessible ways for ordinary people to understand.

I draw inspiration from the long tradition of sciart that has existed since the Renaissance, starting with Leonardo Da Vinci and then Vesalius’s book of human anatomy (illustrated by a brilliant but sadly unknown artist) and leading up to two luminary sciartists of the late 19th and early 20th centuries. Namely, Ernst Haeckel, whose meticulous drawings of microscopic marine life are a constant inspiration, and Santiago Ramon y Cajal, often called the father of neuroscience, whose illustrations of the neurons of the brain are stunning biomorphic abstracts. Both Haeckel’s and Cajal’s artwork has been rediscovered and revalorized by the internet generation, because images of their work have become accessible to a much wider public for the first time. Similarly, there is now a vast database of science-related images available to us online: micrographs of cell structures, bacteria, neurons, and more. These images often become detached from their original context and are reposted purely for their aesthetic value. It’s this new interest in sciart that my work taps into.

No. I think as a visual artist that I am not really here to tell you anything, only to show you something in order to encourage you to look and see.