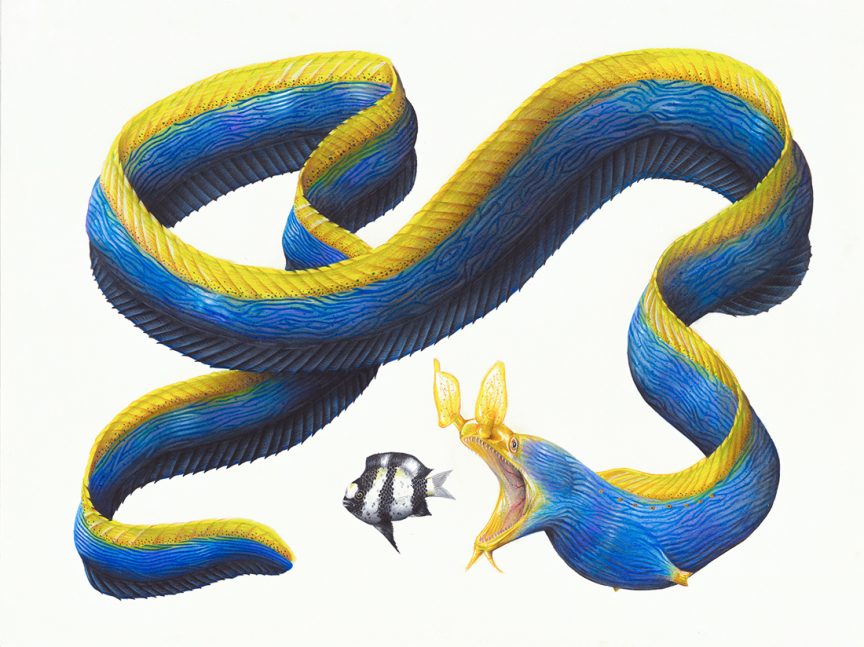 Art came first, as both of my parents are artistic and taught me a lot of the basics from an early age. Art was my hobby up until university, when it took a back seat for a few years so I could focus on my work for my two degrees in marine biology and environmental chemistry. It wasn’t until after I graduated that art became a focus again once I was attending the Science Illustration Certificate Program at California State University, Monterey Bay (CSUMB).

Marine biology and biology in general. I’m drawn to things that may be considered oddities or bizarre in the natural world, and there is nothing more beautifully bizarre than the ocean. But beyond that, I also incorporate other subjects in my work, like geology, cellular science, and even chemistry.

“I’m drawn to things that may be considered oddities or bizarre in the natural world, and there is nothing more beautifully bizarre than the ocean.”

Although I can use a variety of mediums, I mostly use three different mediums to create my artwork: coloured pencil, Adobe Photoshop, or pen/ink/crow-quill. It is no secret that coloured pencil is my default and favourite medium to work in. [Pencils] are straightforward to use and clean, diverse in their application, and provide a great sense of control. I must admit that they are somewhat slow to work with, though. Sometimes I am even known to add watercolour as a base or use acrylics for highlights in the final artwork, as it’s just so hard to keep your whites white.

I’ve only been a part of one exhibit so far, which was the final exhibition that my science illustration program at CSUMB has at the local natural history museum. So by default, that one would have to be my favourite. I got to go through almost everything that goes into creating such an event; it was a very eye-opening experience.

I feel that every new illustration I make is an improvement from its predecessor. So I would say currently I’m most proud of the most recent project I’ve been working on, which is a recreation of the Burgess Shale during the Cambrian period.

This is going to sound corny, but currently, the individuals that have been the greatest influence on me are my professors from the grad program at CSUMB. Before I attended the program, art was only a hobby. They opened up my eyes and inspired me to improve. So special thanks to Ann Caudle, Jennifer Keller, Amadeo Bachar, Andrea Dingeldein, and Jane Kim.

My work aims to show how beautiful some of the most bizarre and abstract forms of life on the planet are, and how their uniqueness and alien-like appearances make them breathtaking. In the end, I want to make the public aware of these fantastic creatures and teach people about them before they potentially disappear forever from a rapidly changing planet.