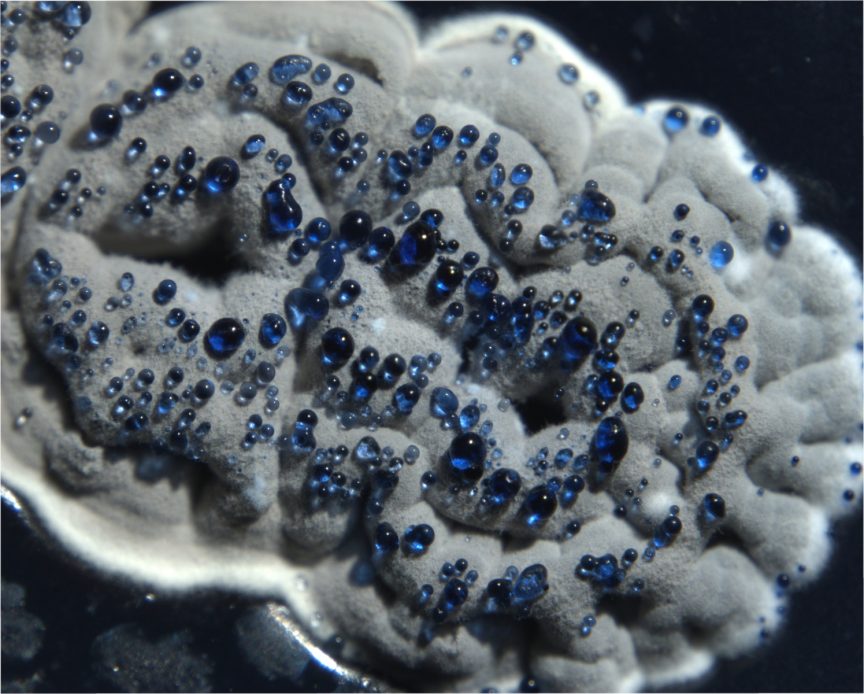 Postdoctoral researcher Dr. Vineetha Zacharia found a unique way to blend her science with her love of art. She paints with an antibiotic called actinorhodin, which is one of the colourful byproducts of the bacterium she studies.

“One day, out of sheer curiosity, I dipped a paintbrush directly onto an actinorhodin droplet and realized how similar it was to watercolour paint,” Zacharia says, explaining that the discovery became the inspiration for a new creative outlet. Today, this antibiotic is the basis of most of her artistic work. She calls these vibrant paintings “Actino Art.”

As a postdoc in the Traxler laboratory at the University of California, Berkeley, Zacharia studies the soil-dwelling bacterium Streptomyces coelicolor. In particular, she looks at its complex, multicellular life cycle as well as a red-pigmented compound it produces that has anti-microbial and anti-cancer properties. This bacterium actually secretes numerous medically-relevant products, many of which are pigmented.

Zacharia conducts time-lapse microscopy experiments, in which she can watch the bacterial colonies in real time as they secrete their colourful products and transition through their life cycles. She loves marveling at her old S. coelicolor colonies on their agar plates, Petri dishes with a nutritious medium that allow microbes to grow.

“When I look at the plates, it is as if I am looking at small pieces of art,” explains Zacharia. “The colonies secrete the striking blue pigment into the surrounding media, giving the solid agar a ‘stained glass’ appearance.”

Zacharia isn’t the only person using S. coelicolor for art. Since starting her Actino Art, she has discovered one researcher who paints the bacterium directly onto agar plates and a designer who uses actinorhodin as a natural dye for textiles.

Zacharia’s technique, however, is unique; she paints with concentrated pigment directly from S. coelicolor actinorhodin droplets.

Furthermore, each of her paintings is different depending on how much pigment she can retrieve from the bacterial colonies she’s using. After collecting the pigmented droplets, she adds a small amount of water to allow the paint to glide more easily on paper, but she is careful to not dilute the colour.

Zacharia has also experimented with actinorhodin’s pH-responsive properties to change her paintings’ colours. Under basic pH levels (ammonia is a basic solution, for example), the antibiotic is blue, but at acidic pH levels (e.g. vinegar), it becomes red. On her Twitter and Instagram accounts, she has demonstrated this characteristic by adding dilute acetic acid to turn a blue painting red.

Zaharia says that both art and science have been a part of her life from an early age. She vividly recalls poring over her mother’s college zoology notebook as a child, admiring the intricate plant and animal drawings within.

Her love of microbes also arose when she was young. Zacharia says she has been “fascinated by the invisible, miniscule world of microbes” ever since watching an episode of the children’s show Reading Rainbow that featured a book on the subject.

Since posting her Actino Art on social media, colleagues and science communicators have been nothing but supportive of Zacharia’s work. She has even been approached by people interested in purchasing her paintings.

“Although my actinorhodin paintings started out as a hobby, I have been able to use them as a tool to reach out to people outside of the field and help them understand the benefits of microbes and microbial products,” she says.

Zacharia is grateful to conduct research that she loves and also have the opportunity to combine her science with her appreciation for art. “I believe that science and art exist in harmony,” she says. “I hope that my actinorhodin paintings convey that message.”