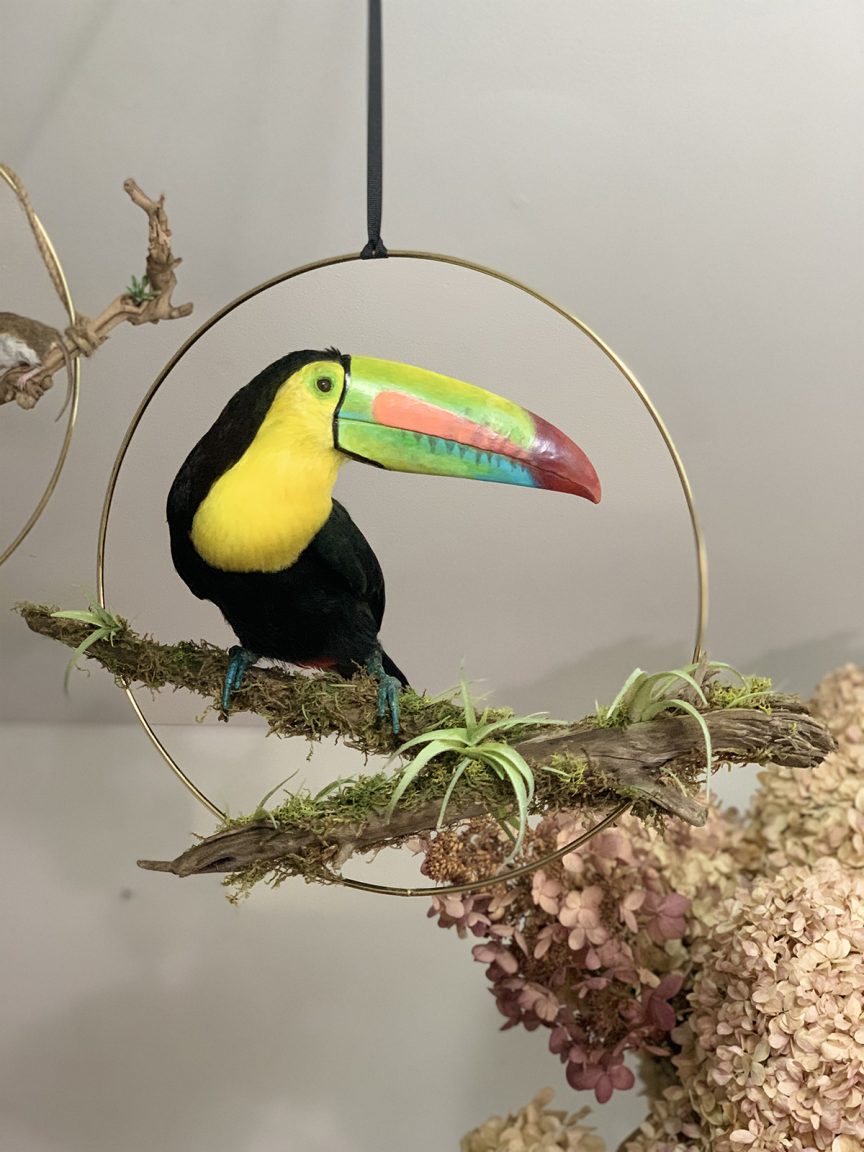 They both happened at the same time, as I continue to see both as ways of understanding our world, both incredibly valuable and influential to each other. The arts lend a much-needed touch of humanity to the sciences.

“The arts lend a much-needed touch of humanity to the sciences.”

Quite a few! In order for a work of taxidermy to successfully represent an animal, the anatomy has to be correct, so anatomy relates majorly to taxidermy. To accurately capture the character of the animal, ornithology, mammalogy, herpetology, and species-specific sciences are a great influence too. For works being used for educational purposes, like in a diorama or a habitat display, it’s important to understand the environment—so the type of plants, the type of soil, other species, such as prey and insects, that would be found in the environment, and how those things would vary by season—in these cases taxidermy is influenced by many sciences! One science I think many people may overlook that influences taxidermy is chemistry—important in using chemicals to properly preserve different skins, and in the compatibility of different paints and sculpting materials.

This is a difficult one because I am usually very critical once a project is complete! I think this year I am most proud of a hummingbird I mounted for a nature center—it’s such a small but beautiful creature and getting to preserve something that beautiful is such an honor! Another piece I’m proud of this year is replica flamingos I fabricated for David Bertka and Neil Patrick Harris (real flamingos are very hard to come by, so I made the replicas out of real feathers from various other waterfowl, dyed to look like flamingo feathers). It was an incredibly challenging project, but also very exciting!

My three favorite historic taxidermists are John Edmonstone (the Black taxidermist who taught the art of taxidermy and specimen preservation to Charles Darwin), Martha Maxwell (an incredibly talented American taxidermist who broke barriers for women in the 1800s), and Carl Cotton (the Field Museum’s first Black taxidermist). There are so many remarkable stories through history from this field that are overlooked, and being a woman of color, I find it really exciting to learn about these stories! Other artist influences are Elsa Schiaparelli, Grace Jones, Edmonia Lewis, Vanity 6, Erte. Science influences include Genevive Jones, Hedy Lamarr, Katherine Johnson, Jeanne Baret.

There is so much unexplored potential for the arts and sciences to collaborate and engage not just each other but the public, so SciArt is a very exciting term. I see art and science as ways of making sense of the world, ways of interpreting observations. So I’d define SciArt as any combination of art and science, no matter what the end result is. Both art and science ask questions, but sometimes, instead of answers, we are just left asking more—there’s a great beauty in that, in surrendering ourselves to wonder.

“Both art and science ask questions, but sometimes, instead of answers, we are just left asking more—there’s a great beauty in that, in surrendering ourselves to wonder.”