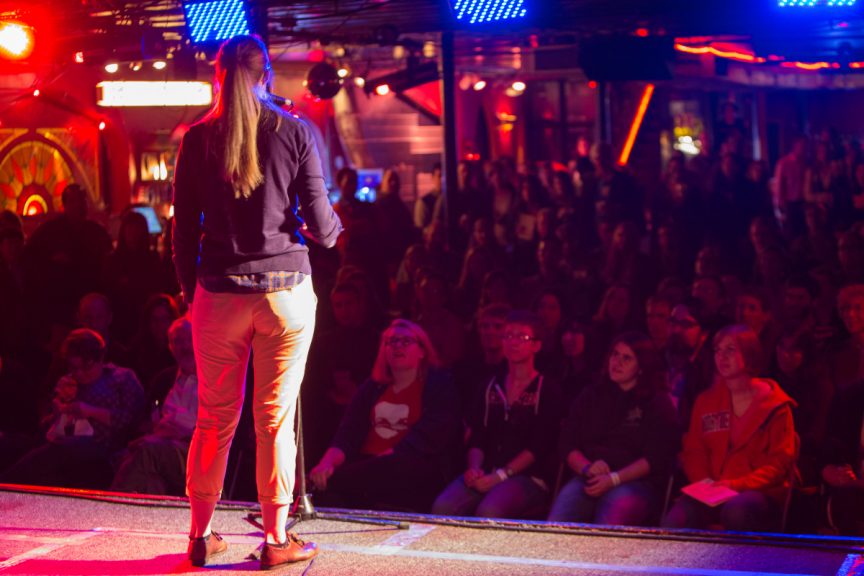 Five years later, Barker became the Artistic Director of the Story Collider, the successful result of Lillie’s experiment. The Story Collider is a non-profit group that facilitates live shows and podcasts about the personal, emotional, hilarious, human side of science. The group works with individuals whose lives have been touched by science to tell their true stories. The storytellers range from lifelong scientific researchers to people who have never set foot in a lab. Barker counts herself as the latter.

“Growing up, I always categorized myself as an English person,” she recalls. With stellar marks in English and journalism and C’s and D’s in everything else, she says that “at the time the Story Collider came together, I was still sort of thinking of science as something that is not for me.”

When the Story Collider was still a series of monthly shows run by Lillie and original co-host Brian Wecht, Barker would help out by running recordings and giving performers notes. She found herself pulled more and more into the gravitational field the show was generating. She remembers that the first show, put on in a bar in Queens, was packed, to her surprise.

“My mind was kind of blown because, first of all, people were really excited about this idea. And then, second of all, the stories were just so human, so much more human than I had expected,” Barker tells me. “I didn’t expect stories about science to be about ambition and love and loss and all of the things that all stories are about at the end of the day.”

What’s involved in crafting this type of story? “We have an initial phone call with the storyteller,” Barker explains. “I ask a lot of questions about their idea. I try to get a sense of what the arc of their story might be, how they might change from the beginning to the end of the story.”

Once Barker or one of the group’s producers has honed in on the central arc of the story, they consider with the storyteller what the “scenes” will be. As we discuss this process, Barker asks me if I’m familiar with the “cow on the fence” idea in storytelling. Since I am ignorant of any bovine-related techniques in narrative, she kindly explains that the phrase comes from one of the Story Collider’s board members Steve Zimmer. In response to a draft Barker once sent him, Steve sent a picture of a cow on a fence.

“I was like, ‘What am I supposed to take away from this, Steve?’” she says, laughing. “And he said, ‘This photo is a story. This cow is stuck on this fence. We know what it wants, to get to the other side of the fence, but we don’t know how it’s going to get there. This is tension, and this is what you need in your story.’ And so, I try to make sure, in every story, that the cow is on the fence.”

The storyteller, their cow now firmly situated on its fence, is then asked to flesh out a structure in any way they like, be it fully written out, an audio recording, or a detailed outline. “We work with them however is best, because not everyone is a writer, and you don’t have to be a writer to be a storyteller,” Barker says.

Barker is an experienced storyteller and performer—she travelled with The Moths and is the first woman to win The Moth’s GrandSLAM competition twice. But she understands that a lot of the Story Collider’s workshop attendees are new to performing and storytelling. “Because these are true stories, I think it’s very important for them to be in control of their story,” Barker tells me. “We’re working across cultures and also working with people from science and, in some cases, there’s very little incentive for scientists to be vulnerable and share stories like this.”

When I ask her to discuss the artistry involved in storytelling, Barker explains that she thinks of it as both an art and a memory. “I think of my role as being both someone’s editor and a documentarian.” She adds, “When someone brings a story to us, they’re bringing their artistry, they’re bringing their craft, but they’re also bringing a sometimes precious memory from their lives. They’re bringing a part of themselves. And I think both of those pieces are important.”

Though the Story Collider has made many converts of skeptics, Barker tells me naysayers are not uncommon. “We have encountered folks in science who will say, ‘It is not appropriate to talk about my personal life in conjunction with my science.’” She elaborates that people with a background in science can be skittish about storytelling because, to them, presenting things as a narrative is inherently misleading. Science, in their minds, is about raw facts only.

If, however, it’s science you’re looking for to determine whether the Story Collider’s efforts are making an impact, you won’t be disappointed. Barker unpacks for me psychologist Dr. Melanie C. Green’s research on “transportation,” or the state of being so immersed in something, a book or movie, for example, that you fail to hear your name called or forget about your lasagna in the oven. “When you’re in the state, your feelings are fluctuating along with the character’s because you are so engaged and invested in the story,” Barker explains. When you are transported by a story, according to Green, you are more likely to revisit it, share it, and seek more information about it afterwards.

Studying the science of storytelling in this way helps Barker and her producers support those in their workshops to craft stories that have cohesive, vibrant worlds and allow listeners to form clear pictures in their minds, factors that contribute to the state of transportation.

Another exciting line of research is Dr. Jeff Schinske’s “Scientist Spotlights” study, which took place at a California community college. When students listened to the Story Collider’s stories over the course of a semester, they reported seeing more of a place for themselves in science, expressed more interest in science, and even got better grades in the class compared to students not exposed to the stories.

Barker recounts an example of someone breaking down stereotypes to find a place for himself in science. At one of the Story Collider’s annual partnerships with SACNAS (the Society for Advancement of Chicanos/Hispanics and Native Americans in Science), Barker met Sean Bearden, who studied physics while he was incarcerated in his early twenties and, this year, earned his physics PhD. At a recent online show, Bearden told the story of a class he attended while incarcerated. “One of the instructors talked to him like he was a normal person and made him feel so human…it changed the way that he thought about himself while he was incarcerated,” Barker tells me. That teacher, it turns out, was in the online audience, listening to Bearden’s story and engaging with everyone in the chat. “It was just a very special moment,” Barker says.

The Story Collider was quick last year to adapt to an online format and runs online events regularly, as well as a podcast series dedicated to stories about COVID-19. They are still collecting these stories and will begin shortly collecting stories about environmental justice. They host monthly story slams, which, Barker says, have become her favourite shows. With the resounding success of this “terrible idea” and the enthusiasm surrounding the online shows despite widespread screen fatigue, Barker says what she is most grateful for is seeing her team of producers embrace the Story Collider’s mission and values as the organization has grown.

“Our first intention is just to build that connection to make people feel as though science is not something that’s not for them, that is far off and remote, but is something that’s immediate and human and very, very present in their lives,” Barker says. “And maybe if they come to enough shows or listen to enough podcasts, [they’ll] walk away feeling like they understand a little bit of who does science, what the process of science is like, how it happens.”