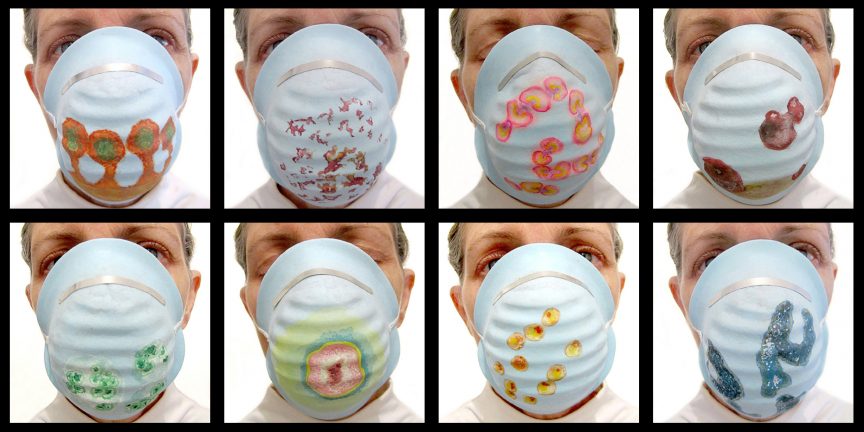 Elaine Whittaker stares at you while you look at the rest of her face, covered with a protective mask. Painted on each mask – some of the deadliest infectious diseases known to us – Malaria, Ebola, and HIV/AIDS.

Toronto-based artist Whittaker’s exhibition, Screened For, is a series of digital prints that feature larger-than-life portraits of Whittaker and the painted protective masks that she wears. This work has been exhibited in New York, Toronto, Seoul, Shanghai, and Australia. 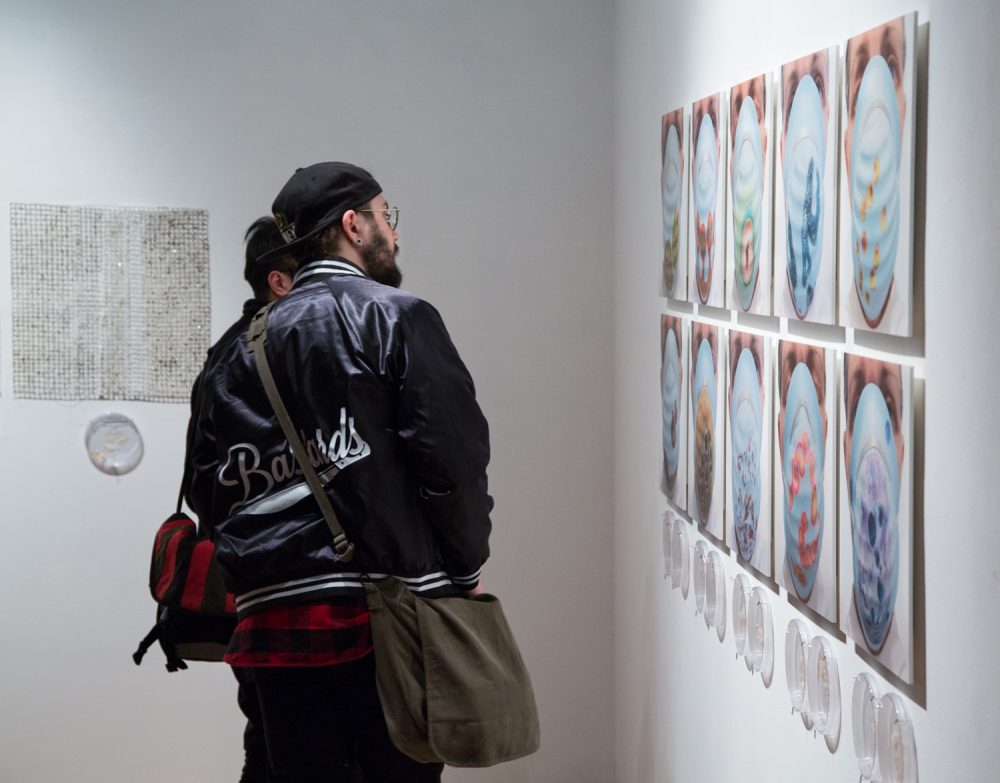 Screened For, in its current digital form, is on display in the Polyfield Gallery. The gallery exhibits Whittaker’s work in a memory-game like grid, where each disease is discovered by hovering over the work.

“People don’t understand the microscopic world,” Whittaker says. Microbes are a fundamental part of our lives; critical in forming life on Earth, they help grow and regulate our food supply, recycle waste, help us digest our food, fight infections and yes – cause them too.

“What is happening in the fields of microbiology is transforming so much of what we know about life-forms,” explains Whittaker. “It needs to be explored in all kinds of ways, including in the visual arts.”

Whittaker’s painted images were sourced from microbiology books and websites.

“The scientific illustrations were beautifully done,” Whittaker says. “When I looked at these images, they resonated with me at an artistic level.”

Whittaker stayed true to their forms, based on microscopic studies and the works of scientific illustrators, but re-interpreted their choice of colours with her own palette.  Since beginning this project, she’s painted over 120 masks and photographed double that amount.

“The human face resonates with people,” Whittaker says. “Looking into the face of another human being becomes a connection point.”

Inevitably it opens a dialogue. Whittaker remembers how complete strangers would begin sharing their experiences with each other – of hospital visits, the discomfort of enduring someone’s coughing fit, and tackling a sore throat. The public is constantly being informed of the dangers of infectious diseases, and the rise of antibiotic-resistant bacteria, for example. With this in mind, Whittaker wanted to see people’s reactions to the masks, their trepidation, and heightened sense of one’s own fragility.

“People need to be confronted with this latent fear. When they see the news, they look at the work and now, they are aware of it,” she says.

A lot of people, as she found out, backed away from the pictures. ‘Oh my goodness, you put HIV/AIDS on your face?’ she remembers hearing from one of the viewers. Some people didn’t quite understand that they were paintings or visualizations. Most were fascinated.

It is very difficult for science to exist without visual communication. Importantly, the public needs to understand science and visuals help immensely.

Members of the public would inquire with Whittaker about the colours she used or how she got the images. For young children, the next generation of Canada’s scientists, Screened For is an immensely creative and through-provoking look at one of our most fundamental co-habitants on Earth.

“Scientists are using tools in the laboratory all the time –  magnifying life with microscopes or using graphics to portray data,” Whittaker says. “It is very difficult for science to exist without visual communication. Importantly, the public needs to understand science and visuals help immensely.” 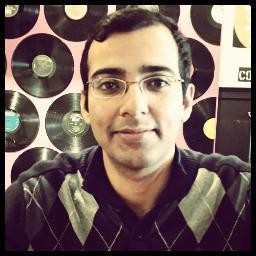 Ani has happily migrated from a fifteen-year stint conducting research to a lifetime of writing its stories. He has worked in six different laboratories across India, Germany and Canada. Ani is intimately familiar with how researchers think and the culture of research. Over the last four years, he has put his passion for research communication and outreach into practice. Ani's LinkedIn