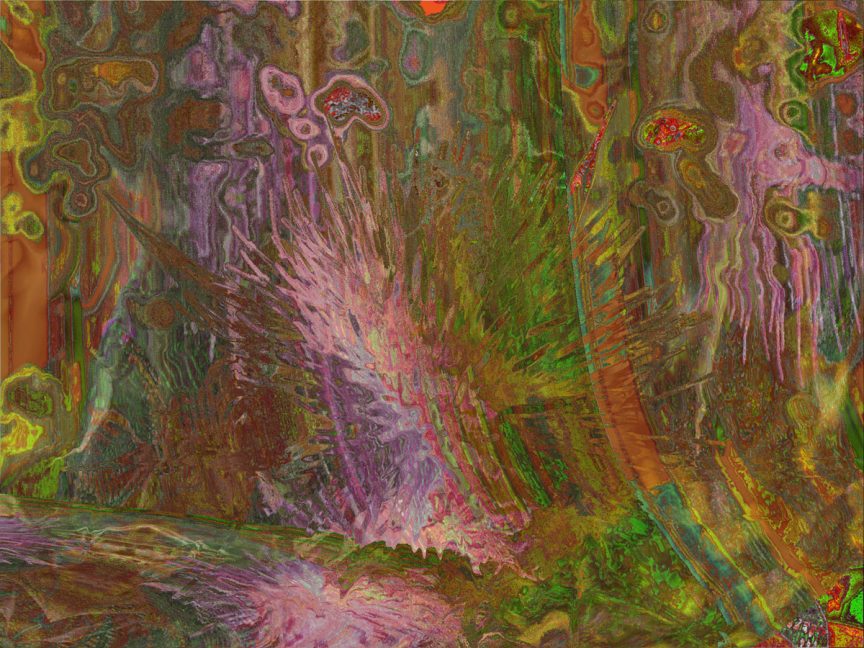 My interest in being an artist comes from growing up in a close-knit community in Central New Jersey in the early 1950s as the son of Jewish chicken farmers turned landscapers. My parents’ switch to horticulture was a true gift to me. It nurtured a fascination with exotic plants and gardens beginning in my elementary school years, an attachment that has remained with me to this day. Indeed, it is photographic images of the plants that I grew in my own exotic garden that serve as the basis for much of my digital art. I genuinely love to look at and cultivate plants and admire their beauty.

“My parents’ switch to horticulture was a true gift to me. It nurtured a fascination with exotic plants and gardens beginning in my elementary school years, an attachment that has remained with me to this day.”

But even as a very young child I also had a passion for math and science that sealed my commitment to science at a very early age. So I left the farm for a degree in biology at Caltech (California Institute of Technology). Then off to grad school in neurophysiology at Columbia. I left that program for personal reasons. Four years later, I started again studying the low temperature physics of freezing in trees. This time, I finished my PhD in that topic at the University of Maryland at College Park. Subsequently, I worked on the physics of frozen blood cells, fruit fly mortality, protein stability, and for the last 15 years, the physical chemistry of protein chromatography.

Today, I am still a practicing biophysicist marketing chromatography technology I co-invented, but I have also developed as a mathematical artist due to a seminal family tie. My late brother Gene was a classically trained artist in oils and watercolours. By the late 80s, he had also become a digital artist, using available tools such as Photoshop and Painter to create elegant representational paintings from photographs. When my first child came in 1992, he urged me to try fractal style painting with the computer because I am good at math. He said it might relax me.

Up to that point, I, like many biologists, was an indifferent computer programmer. Now I had a second chance, and I dived into learning proper structured programming by initially building screen saver painting programs. I soon switched to working every night on digital imaging problems my brother gave me, until finally I turned exclusively to scientific programming at the turn of the century. This focus on computer programming proved invaluable to my professional scientific work. Yet in the years since, slowly cooking in my subconscious was a scheme for a very large and complex colour and space manipulation engine. It took me years to finally sit down and write the code, and I am continually expanding it. But it has been fully operational for seven years, allowing me to create a wide array of representational, impressionist, surreal, and abstract images purely through the use of mathematics.

My art is generative, i.e. the computer paints robotically after I choose the equations and set controlling parameters. So it is purely mathematical and thus not drawing on the physical sciences at all.

Imagine an image made of wet paint (in my program this is either a digital photograph or previously transformed image or hybrids thereof). The artist takes a brush and begins to swirl the paint around or takes a dab of paint from one part of the image and transfers it to another part. Now imagine that the tip of the brush is so fine and the image is discerned at the microscopic level such that the artist can control the movement of each individual dye element in the paint (each pixel in a digital image). Finally, imagine that the movement of the brush holding each dye element is controlled by complex patterning strategies the artist conceives. That is very close to what I do with my main engine.

After each element is algorithmically moved to its new location, a second mathematical transformation of the element’s colours can also be simultaneously initiated if I so choose as I set up the painting run. Because I can control the parameters in the equations to one part in a billion billion, I can manipulate my images with great precision, and can systematically alter the images to try to achieve an acceptable aesthetic. In addition, a separate part of my system allows me to do extremely complex colour transformations on each pixel using mathematical transformations of the colours in the pixels immediately surrounding it. This allows me to expose amazing hidden patterns even in unremarkable images.

“[My process] allows me to expose amazing hidden patterns even in unremarkable images.”

My computer programming language is PowerBASIC, a full capability language with direct access to memory through pointers that is completely structured like C. My operating system is Windows 7 on a Sager gaming computer. I have used my edge painting algorithms to invent and patent a new way to upsize my images so I can produce high quality art at 300 dpi up to 80 inches by 100 inches.

My inventory is enormous because my program is extremely efficient. At this time I have somewhere near 80,000 paintings. Thus, I have too many “favourites” to know where to begin.

I think my best exhibitions have been the one at ArtSeen Gallery a year ago, and the one that hung until March 20, 2020 at ArtSeen Gallery. The Gene Davis Inspiration show I hung in January was reviewed favorably by Mark Jenkins in The Washington Post.

I love several of the early pioneers of modern art. My favourite is Monet, and I am also very fond of Mondrian, Kandinsky, Picasso, Klee, Klimt, Renoir, Van Gogh, and Miro to name just a few. But my brother Gene is by far my greatest artistic influence.

“My brother Gene is by far my greatest artistic influence.”

In the sciences, Einstein has been a lifelong hero. Generally, great scientists like Newton and Feynman have been a strong influence. More personally, my first significant influence was my uncle Joe Ballam, the man who married my father’s sister Ethel. He became a distinguished physicist, and for 17 years was the first director of research on the Stanford Linear Accelerator. A small anecdote illustrates this. By the time I was four, my family knew I was precocious and science oriented. At that time, Joe was a postdoc in cosmic ray physics in a lab at the north end of the Princeton University Quad. One day Aunt Ethel decided to take me on a visit to the lab. As we approached the steps at the entrance, she suddenly grabbed my shoulders and turned me 90° right. In the distance, an old man in a long coat was slowly ascending some steps. My aunt said, “that’s Albert Einstein.” A simple memory but still clear in my mind.

The next major influence was the close family friend Lou Zeitz, a biophysicist who spent many years leading a lab at Memorial Sloan Kettering Cancer Center. Besides being a fine scientist, he was an extraordinarily kind man. Remarkably, I did not bond with any of the large number of leading scientists at Caltech, despite working every summer in the labs.

My next major influence is Professor Arthur Karlin of Columbia University, a member of the National Academy Of Sciences. I was and remain his only grad student in neurophysiology. I left a fine project in his lab for personal reasons having nothing to do with him, but his insistence that I believe in myself has helped me continue on in science.

“[My professor’s] insistence that I believe in myself has helped me continue on in science.”

After a few years of searching in Maryland, I stumbled into Harry Meryman’s famous blood lab at the American Red Cross. There I partnered with Robert J. Williams, a polymathic biologist, to investigate the biophysics of deep freezing resistance in trees (my PhD), and a little later I worked extensively with Tsuneo Takahashi and Bob Williams on the cryopreservation of blood cells.

Starting in 1992 I began work on protein stability with a Bulgarian scientist, Latchezar Tsonev. We have worked closely together to the present on proteins, deep freezing resistance in certain subtropical plants, and the invention and marketing of the first wide ranging pH gradient chromatography.

It seems odd to me that photography is widely and properly considered a legitimate art form, but digital art struggles for similar respect. I think part of the answer lies in the perception of the talent necessary to produce the image. Most of us who have taken many photographs in our time on this planet have come to deeply respect those folks who can habitually snatch remarkable photos from the ether.

In contrast, using sophisticated filters such as those in Photoshop and Painter allows a skilled digital artist to turn mediocre photographs or even blank canvasses into wonderful digital paintings. But it can be argued that it also allows undistinguished talents to produce passable work. Thus, for many it is easy to dismiss the tools of digital art as some sort of giant kaleidoscope.

The painting engine I have created is powerful enough to generate fascinating images from a wide range of mathematical inputs. I cannot escape my belief that with a modest amount of training, most educated people could rapidly learn to use it effectively. So the skeptic might say, how artistically deep could such images be, if a huge number of people can master the process? My reply? How many people can master the technical aspects of painting? A very large number as we know, because society is now filled with a vast number of people who have learned how to paint. How many people have mastered the use of a camera? Again, a very large number of people create compelling photographs.

“An artist has every legitimate right to master as wide a range of tools as possible, then drive them with wisdom, imagination, and originality to create compelling images previously unrealized.”

So to me, the counter argument seems straightforward: an artist has every legitimate right to master as wide a range of tools as possible, then drive them with wisdom, imagination, and originality to create compelling images previously unrealized. The final product is the proper measure of artistic validity, not which tools produced it. This argument requires that one believe that fine tools and no talent will almost always produce mediocre art, but better tools and talent will improve the art. All that being said, the prejudice against digital art is huge and very discouraging to those of us pursuing it with passion.