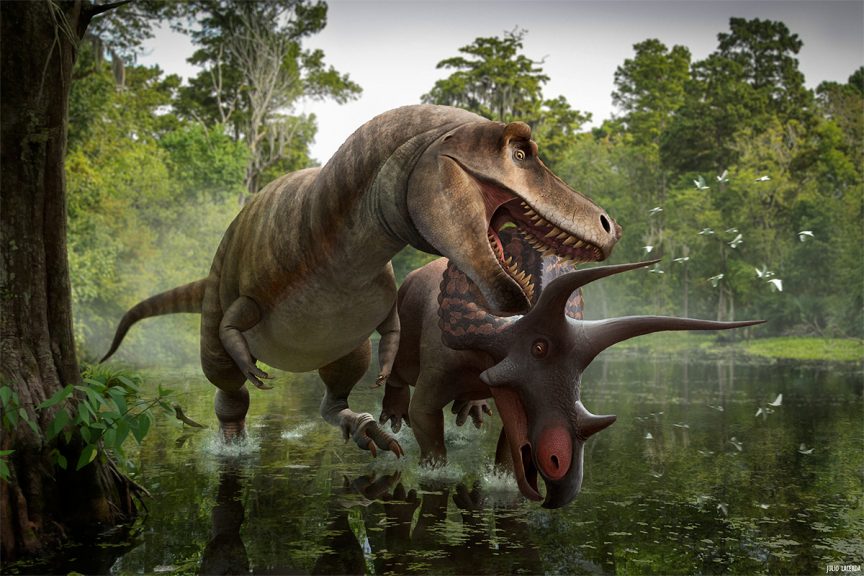 The art. I’ve been drawing since I was around 3 years old, mostly animals. My mother is also an artist, though her focus is abstract oil paintings, so she has always been very supportive of me pursuing a career as an artist myself. It was only in the last decade or so that I really began to pay attention to all the science that is behind this kind of illustration.

Mostly paleontology, though I’ve also dealt with aspects of archaeology and geology at times by illustrating early humans and maps of Earth at different points in time. My main focus is extinct animals, however.

My art is digital, done mainly in Adobe Photoshop. Though sometimes I use 3D software like Blender to create models that serve as reference for lighting, perspective, etc.

One of the aspects that I most admire about paleoart is its educational potential. It can be used to make people interested in the natural sciences as well as science in general, and it can teach an audience about several concepts, such as evolution and environmental balance. So some of the work I’m most proud of is for books aimed at children and teens that have been published here in Brazil. These books feature our own paleontological history and inspire new generations to become scientists themselves.

“One of the aspects that I most admire about paleoart is its educational potential.”

I was inspired to work with paleoart in the first place by some established artists in the field, such as Gregory S. Paul, John Sibbick, Doug Henderson, and Mauricio Antón. But ever since I became involved, I’ve had the pleasure of seeing new names pop up every now and then. They keep inspiring me and showing how our community is evolving. Nowadays, artists from all over the world like Andrey Atuchin, Julius Csotonyi, Lucas Attwell, and Ville Sinkkonen make me want to keep improving.

“Ever since I became involved [in the paleoart field], I’ve had the pleasure of seeing new [artist] names pop up every now and then. They keep inspiring me and showing how our community is evolving.”

Paleoart is not just a fun way to imagine and represent our planet’s past. It’s also an important tool to understand and prepare for the future. Through paleoart, we can bring the often complex and abstract work paleontologists do to a general audience in a way that is interesting, eye-catching, and inspiring. In doing so, we teach the importance of paleontology beyond what we see in popular culture. By studying how Earth and its environments changed in the past, we can paint a better picture of how our actions and current conditions can affect our surroundings today and in decades to come.

“Through paleoart, we can bring the often complex and abstract work paleontologists do to a general audience in a way that is interesting, eye-catching, and inspiring.”