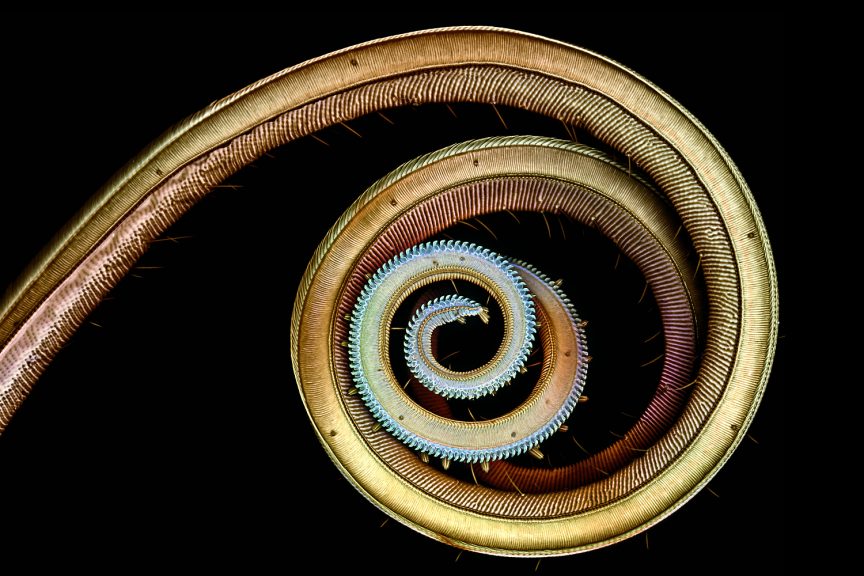 Fascination with nature and proclivity for visual arts manifested pretty early on in my life and were moving along parallel trajectories until some 10 years ago, when they finally converged and merged. If you believe my mom, even before I could walk I was paying a lot of attention to wildlife, with particular fixation on gastropods for some reason.

“If you believe my mom, even before I could walk I was paying a lot of attention to wildlife, with particular fixation on gastropods for some reason.”

Like all kids I became a doodler the moment I could handle a crayon. My parents are biologists and I grew up surrounded by textbooks. I enjoyed browsing through the illustrations and photographs long before I learned how to read; this was my first exposure to scientific work. It wasn’t until 17 years ago, at the age of 26, that I bought my first camera and found myself on the supply side of nature photography, with a special focus on macro technique. Initially simply a hobby, photography allowed me to develop some level of expertise of insect morphology that in turn effectively facilitated my transition from the field of biochemistry to neurobiology.

I am a biochemist by education, with a PhD in structural biochemistry and 2 years of post-doctoral experience in the field. I spent several years studying interactions of proteins on atomic level and at some point I found it to be too reductionist for my personal taste.

Ten years ago I decided to change my field of research to one that is more in tune with my naturalist’s interests. Neurobiology is the study of cells of the nervous system and the organization of these cells into functional circuits that process information and mediate behavior. Insects, having a relatively simple and hence easier to study, nervous system, are commonly used as models, the premise being that on the most basic level of relatively simple neuronal networks we have a lot in common. It was my extracurricular expertise in invertebrate anatomy and macro photography that made the transition possible.

One of the tools often used by neurobiologists for studying morphology of neurons and their networks is a microscope, and as an added bonus I gained an access to high-end microscopes, such as a confocal microscope. Microscopy perfectly complements macro photography and gives me an even more intimate perspective of my “models.” I’m fascinated with invertebrate morphology; usual evolutionary restraints don’t seem to apply within the realm of tiny animals, which is evident in the abundance and variety of often grotesque and utterly alien forms. Microscopy allows me to see beyond the cuticle, explore the baroque arrangement of muscle fibers or intricate fractal-like network of neurons.

“Microscopy perfectly complements macro photography and gives me an even more intimate perspective of my ‘models.'”

My tools of trade are a digital camera and a confocal microscope. For the past decade I’ve been shooting with a Canon EOS 5D MkII. Illumination is paramount, and light softening is crucial in macro work. I’m usually using two off-camera flashes controlled by an IR transmitter and equipped with diffusers or soft boxes. A sturdy tripod and a remote shutter release, as well as setting the camera in the mirror lockup mode, minimize vibrations that tend to be greatly amplified in macro work.

Laser scanning confocal microscope produces images in a very different way than a bright field microscope (your standard biology class microscope). It is a fluorescent microscope, which means that the imaged specimen is illuminated with light of a certain wavelength and emits light of a different, longer wavelength. It’s the same physical phenomenon that makes black light posters from the ’70s-‘80s glow. The microscope, which registers that light, takes a series of images of the tiny specimen by scanning it point by point. Because the specimen is much thicker than the plane of focus, a series of images—called “stack”—is collected by moving the sample up or down. From those “optical slices” a three-dimensional image of the structures within the sample can be reconstructed.

I had an honor of winning the 2013 installment of the Olympus Bioscapes photomicrography competition, along with bagging 3rd place. The winning image was of a trap of a humped bladderwort, which sounds like something from Harry Potter, but in fact is a carnivorous freshwater plant quite common in local ponds. Aquatic bladderwort is, at first glance, far less spectacular than, say, a Venus flytrap or a pitcher plant. It is able to tackle only minute pray, like waterfleas and copepods, so it wasn’t high on my Close Encounter wish list. Little did I know about the complexity the bladderwort’s trap reveals when magnified. In fact, it is considered the most sophisticated trapping organ in the plant kingdom, a true testimony to evolution’s ingenuity.

“Little did I know about the complexity the bladderwort’s trap reveals when magnified. In fact, it is considered the most sophisticated trapping organ in the plant kingdom, a true testimony to evolution’s ingenuity.”

Bladderworts are known to have an intimate relationship with single-cell green algae called desmids, which can be found in a vast diversity of shapes and sizes. Finding the bladderwort came with the added bonus of stumbling upon those intricate algae. I became immediately obsessed with them, a phenomenon known among microscopists as “desmid twitching” that is characterized by the compulsion to take water samples from every encountered freshwater reservoir. The 3rd place photomicrograph showed a compilation of a number of desmids images in a form of mandala.

It would take too much space to give a shout out to all of the founding fathers (and mothers) of my present day consciousness. In no particular order, mathematician Douglas Hofstadter, for his work on origins of cognition and self-awareness expressed in the mind-blowing book Gödel, Escher, Bach; Douglas Adams, the author of The Hitchhiker’s Guide to the Galaxy; and the French polymath and philosopher of science Jules Henri Poincare. I’ve also been influenced by Dr. Robert Sapolsky, a primatologist and neuroendocrinologist from Stanford University who is a person with great, empathy-driven personal philosophy and is the author of multiple excellent books on the forces controlling human behavior. For similar reasons, I admire Oliver Sachs, a psychiatrist and a writer of some major eye-openers. I also draw inspiration from physicist and cosmologist Sean Carroll, comedian and podcaster Duncan Trussell, psychonaut and philosopher Terrence McKenna, writer Dan Harmon, magick user and teacher Jason Louv, and comedian Bill Hicks. I admire their humor and commitment to pushing the boundaries of our understanding of the nature of reality.

Browsing through artwork of Hieronymus Bosch or M.C. Escher often helped me break through the photographer’s block and get into the creative zone. One work that definitely inspired me the most was Ernst Haeckel’s “Artforms from Nature”, a truly magnificent collection of highly detailed lithographs showing all sorts of life forms and one of the best examples of the marriage of scientific approach and artistic talent.

Finally, a shout out to Alex Trebek, a person I admire more every day.

Here’s something I wish I was more aware of 25 years ago. There’s an old Greek dictum attributed to Socrates that “the unexamined life is not worth living.” It might be an easier life to live, though. Introspection and finding what exactly motivates our actions can lead to some dark realizations, but also very interesting revelations. Take, for instance, Alan Watt’s idea that “our normal sensation of self is a hoax or, at best, a temporary role that we are playing, or have been conned into playing.” Briefly and without going into details, it’s helpful to realize that human body, including the brain, is full of evolutionary leftovers that no longer serve a purpose. This evolutionary baggage often screws up our reasoning, our ability to think rationally.

The only remedy against those pitfalls is mindfulness, a continuous meta-cognitive routine, where you mentally stand back and observe your thought processes, running them through a checklist of cognitive biases and fallacies. Effectively you run your thoughts through more synapses in your brain. By doing that you slightly delay your response to a stimulus, hopefully avoiding knee-jerk type of reflexive reaction It requires mental discipline, but that’s the only way we can earn the right to call ourselves creatures of free will. Otherwise, we’re just letting very ancient programming control our thoughts and actions. I honestly think that the only way for our species and planet to thrive in the long run is by abandoning Darwinian selfishness and replacing it with collective evolution of consciousness.