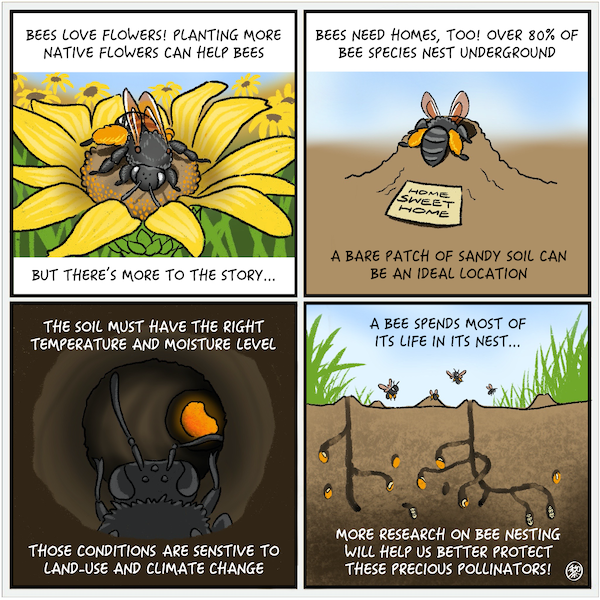 We all know about the birds and the bees…and how they pollinate flowers! But what about flies? What about the tricks they all play? There’s a ton of research flying to the surface about various pollinators and their relationships with plants, and Loy Xingwen is spreading the word through comics.

“Science seeks to provide us with the information we need to make good decisions. But you can’t ‘inform’ people into action,” says Loy. “To make change happen, people must be persuaded, convinced, inspired or captivated.” With his SciArt style, it’s hard not to pay attention.

In a single, four-panelled comic strip, Loy manages to fit a bite-sized science lesson about the various workings of insects, birds, and flowers. “I was never a comic book fan, but I like the way that comic strips can deliver interesting ideas so succinctly,” says Loy. He partners vibrant colours and fluid shapes with carefully worded text in order to “tell a compelling, complex research story in very few words.”

Loy is an ecologist working at the Atlanta Botanical Garden, in the Southeastern Center for Conservation, where they focus on the conservation of plants in and beyond the southeastern US. “To conserve and manage imperiled species, conservationists need to understand what is harming them, as well as what can be done to bolster vulnerable populations,” says Loy. “My job is to find out what an imperiled species needs to thrive, so we can protect or create suitable conditions for it in the wild.”

Meandering the many options plant science (and life) has to offer, Loy studied horticulture and botany before landing on plant ecology. But his passion for plants and pollinators kindled as a child in the small island country of Singapore, where he “learned to appreciate biodiversity not in Singapore’s lush rainforests but playing in weedy urbanscapes.”

It seems that for plant people with ties to Singapore, such as Loy or myself or botanist James Wong, there’s an appreciation for how the densely populated city incorporates nature. However, as Loy says, “gardens are no substitute for the lush rainforests, mangroves, and other wild spaces that once covered the island.” Its four nature reserves make up less than 5% of the land area, and Loy hopes these “remaining wild spaces will be protected and managed to support [their] incredible native biodiversity.”

Understanding what makes biodiversity so important can lead to better efforts for its protection, and Loy’s comics are an amusing way to learn about flora and fauna. “My comics are inspired by plants and animals that I see around me. I believe you don’t need to go far to find fascinating plants and animals, and I hope my comics inspire people to take an interest in the natural world around them,” says Loy.

“When I’ve identified a plant or animal I want to highlight,” Loy continues, “I look up published research articles related to it. Some types of research suit this style of science communication more than others, and nearly all my comics are based on such research articles.” His comics thus cover lesser known but utterly fascinating details, such as how jewelweed can produce animal-pollinated or self-pollinated flowers, or why luna moths have tailed wings….

Or how plants can be quite devious: “Some plants trick their pollinators, attracting them to pollinate but giving nothing in return. Jack-in-the-pulpit is like that. It attracts gnats to pollinate it but it gives nothing in return. But things go a step darker: the gnat sometimes dies after pollination because it gets trapped in the plant and the plant has simply not evolved a way for the gnat to easily escape,” Loy explains. “It’s such a harsh reminder that pollinators and plants are not friends or foes to one another. Their relationship is quite pragmatic. But I think the contrast of how dark the plant-pollinator relationship could be, and how it usually isn’t, is uplifting.”

Loy shares his comics on Instagram and Twitter—social media platforms that have extended the reach of science communication. “I think it’s a dependable way to communicate science but not always a dependable source of it,” Loy says. “I don’t think social media should be one’s primary source of information.” Modelling this, Loy credits the research on which his comics are based, allowing people to read further, if they so choose, and he’s open to his followers asking questions.

Climate change often appears in Loy’s comics as one of the main factors affecting pollinators and biodiversity. While he recommends following scientists and organizations such as Pollinator Partnership, the Xerces Society, or the USA National Phenology Network for updates on pollinator-focused work, he also puts forward a caveat: “I will say though, that while knowledge of the impacts of climate change on biodiversity can be valuable for mitigating species loss, it is not the root of the problem. Fighting climate change is the only long-term solution.”

With recent disasters in mind, such as the Lytton wildfire or the flooding in Germany, it’s feeling as though fighting climate change will continue to be a drawn-out battle. “I think in this scenario [people who feel] hopeless are actually the most hopeful,” says Loy. “They are disappointed because they wish for better, but they need to take care of themselves if they are going to be part of a solution.”

“Fighting climate change is the only long-term solution.”

“My advice (really, what I try to tell myself) is stop searching for sources of hopelessness—you are already well aware of the gravity of the situation. Focus on solutions. Take small steps and make personal choices towards reducing your carbon footprint. This will not change the world but it will change you—that’s the first step on this journey. Recognize that there are people who have more power and influence than you—push them to make a difference.”

Whatever your journey is, don’t forget to include things that make life worth living and the planet worth saving. In Loy’s case, there are more house plants and possibly a puppy, a passion for his work, and a desire to encounter new plants and ecosystems. And definitely more comics! 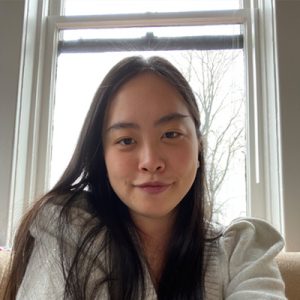 Katrina is a Korean-Chinese artist, writer, and editor. Learning from literature, botany, herbaria and ikebana, she makes hybrid flowers from dried or pressed plants and calls them Frankenflora. She currently writes about sciart at Art The Science, proofreads SAD Mag, and blogs at Lifeology. She also created Seagery Zine, a small print publication that explores the overlap between art, science and literature. Her Frankenflora have been exhibited in Vancouver, BC, at the Beaty Biodiversity Museum, Science World, and the VIVO Media Arts Centre. ​ Katrina was born on the traditional territory of the Haudenosaunee and Anishnaabeg (so-called Hamilton, ON), raised in Singapore, and is grateful to be living on the unceded territories of the Musqueam, Squamish, and Tsleil-Waututh Nations (so-called Vancouver, BC). She graduated from the University of Victoria with a BSc in Biology and English. Instagram: @furiebeckite