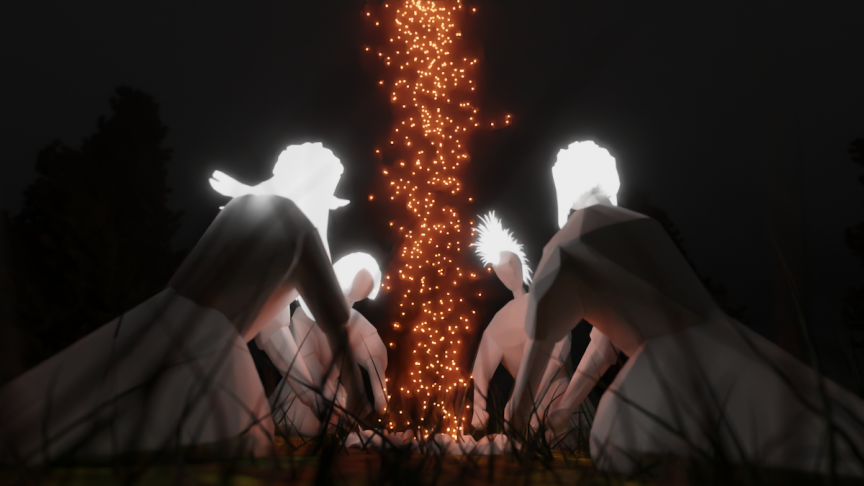 As a teenager, Casey Koyczan asked a question: “Why don’t I just want to do one thing?”

Now an established multidisciplinary artist, whose work includes staggering virtual reality (VR) renditions of Dene legends, Koyczan was once on the path to becoming a professional hockey player. Koyczan loved the game, but realized the “eat, sleep, breathe hockey” attitude the career required simply wasn’t there.

Koyczan tells me in an interview that multifaceted interests created the feeling of being an “oddball” in the hockey world. Fascinated with technology and sci-fi, Koyczan would take apart childhood toys just to see what was inside. Koyczan struggled with the idea of a linear career path.

Koyczan also embraced technology as a way to get closer to a culture from which there was a disconnect largely due to prolonged geographical distance from Yellowknife, Northwest Territories, where Koyczan was born. “That technological aspect has really assisted me to learn about my culture, and that’s where I feel culture and technology have come together in order to help me grow,” Koyczan says, citing online research, the Tłı̨chǫ dictionary, and Tłı̨chǫ language app as particularly helpful.

Leaving the sports world to pursue a BFA at Thompson Rivers University, Koyczan fell in love with sculpture, and focused the degree and much of the work after graduating on sculpture installation and immersive art. Multimedia installation still forms a large part of Koyczan’s practice—the installation “Ełexiìtǫ ; Ehts’ǫǫ̀ / Connected ; Apart From Each Other” is showing in Toronto, Ontario at InterAccess gallery until April 23, 2022.

Returning to Yellowknife after the BFA, Koyczan received an HTC Vive VR headset and gaming laptop from Western Arctic Moving Pictures, a non-profit arts organization in the city.

Koyczan proceeded to break every record in the game, which prompted the friend who lent the headset to suggest trying Tilt Brush, a 3D painting application. “I was like, sure, we’ll see what this is all about,” Koyczan says. “And I instantly fell in love with it.”

The artist started creating pieces based off of Dene legends and animals of Canada’s north. Revelling in the freedom of the unlimited virtual space, Koyczan picked up the medium quickly, with the 3D format making things like perspective and scale tools rather than obstacles.

Koyczan moved from Tilt Brush to Adobe Medium, which is more akin to virtual reality sculpting than painting, and then to Gravity Sketch because of the easier exportation process to the game engine Unity. Koyczan uses a recent piece, New Kookums, which explores the spirit of the next generation of Elders, as an example of how multi-faceted a single work can be. The artist used Tilt Brush to create the figures and fire, Blender to edit the forest scenery and the piece’s physics and depth of field, Ableton Live for the audio, and Adobe Premiere Pro to edit the whole piece together. “So it’s just four pieces of software right there in order to make one work,” Koyczan explains. “And I find that really, really interesting but also motivating. It kind of teaches me to be very versatile, adaptable, and dynamic.”

But is everyone receptive to the blending of traditional culture and technology? “I know there’s probably some people, most notably Elders, who don’t really want technology to have space within culture,” Koyczan tells me. “I can understand that, and I want to respect that mindset. However, I just don’t agree with it. Because of my case, specifically, it is possible for culture and technology to grow together. If I was immersed in my culture within Yellowknife, and I didn’t leave, it would be a much more hands-on approach. And that’s definitely the easiest and best way to learn, hands down. But given my situation…I needed technology in order to learn more. And then it got to a point where it’s like, I’m using technology to communicate things about myself and my culture in a new way.”

Koyczan recounts a message from a friend, who was in Délı̨nę, Yellowknife, giving a workshop. He asked Koyczan if he could show Raven Gods, one of Koyczan’s VR pieces, to some Elders. Koyczan was hesitant. “I was just like, okay, this is the moment. Because ever since I started to create in VR with inspiration from Dene legends and northern animals…in the back of my mind, I was always kind of concerned about what our Elders would think of this.”

The friend told Koyczan that the Elder put on the VR headset and spent a long while looking around the space, gazing up at the ravens in the sky. “They took the headset off, and they said, ‘You know, I really didn’t think much of virtual reality before this. But if it’s going to be used like this, then it’s okay with me,’” Koyczan says. “And that’s all I needed was this one Elder from Délı̨nę to basically give me the thumbs up as to what I’m doing. So I just ran with it after that.”

I ask Koyczan what’s a particularly exciting development in the VR world right now. “I used to say that VR is in its infancy,” Koyczan responds. “But now I think VR is in its early teens…it’s not crawling anymore. It’s starting to run; it’s starting to talk back to you now. It’s fair to say it’s getting a little rebellious! But it’s really opening up a lot of different things.”

Koyczan mentions mixed reality and augmented reality as two developments making an impact on the creative world, but then, looking around, nods to HTC Vive and Oculus headsets. “Just within the last six or seven years, the advancement of VR technology has come a long way. And the price point has dropped significantly,” Koyczan remarks. Koyczan explains that the HTC Vive plus the gaming laptop required to run it used to cost three grand, whereas now you can get a basic Oculus Quest 2 headset for about four hundred dollars, with no need for an external laptop. That plus free programs like Blender make the digital arts more accessible than they’ve ever been.

“So that’s something that I’m really excited about,” Koyczan says, “as well as having more people interact with these tools, especially Indigenous people. Because I find, you know, we’re kind of segregated already. That would be great if these sorts of things were available to our youth in order for them to start to tell their stories.”

Koyczan continues, “Being an independent artist from Yellowknife, where we have very little support, it’s just a really big drive for me to do good things, but also to teach our youth that there’s other options out there besides working in the diamond mine or working a nine to five. Just to inspire, hopefully, is one of my main motivations.”