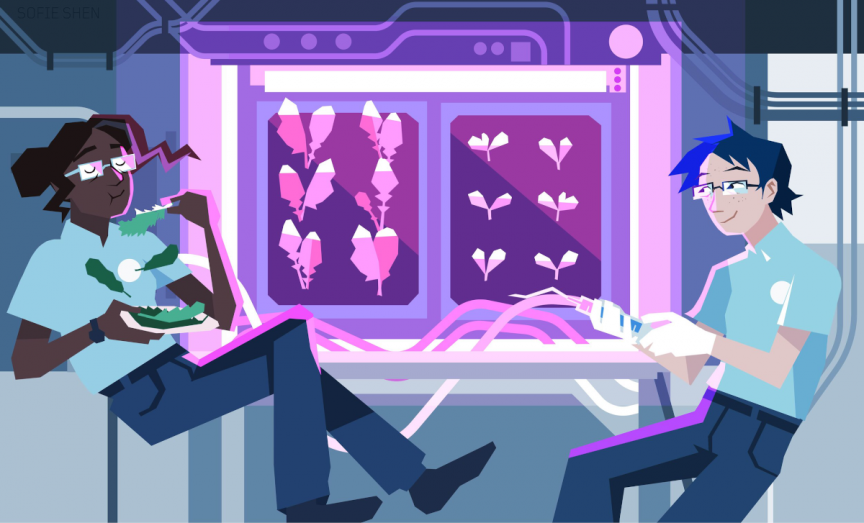 Here’s something you might not think to do with your spare time: give NASA a hand by teaching a computer how to find Swiss cheese on Mars.

For Sofie Shen, a visual development artist from Pasadena, California, this and other space-related pursuits come naturally. Shen is on a mission to bridge the gap between science and art. Her illustrations and designs transform space exploration from something abstract and elite to an enterprise that is beautiful, clear, and within everyone’s reach.

Shen defines visual development as creating the aesthetic or style for something, whether it’s an animated show or a habitat on Mars—essentially, setting the tone through research, illustration, and design. Shen attended ArtCenter College of Design, where she studied entertainment arts, or “designing stuff for cartoons,” as she phrases it. After graduating, she designed posters for an animation studio and toys but did not find the work particularly meaningful.

“But I always liked science,” Shen tells me. “And I always liked nature and biology. But I wasn’t that good at math…. And space stuff, when I was younger, gave me an existential crisis to think about!”

But “space stuff” was close by, five minutes away from Shen’s alma mater to be exact. NASA’s Jet Propulsion Laboratory (JPL) piqued her interest, but, having toured it in the past, Shen’s thinking was, “Oh, this is interesting. But like, I don’t know what it has to do with me. They’re just over there doing their thing, you know?”

That changed when a friend from Poland came to visit Shen in California, and they embarked on a tour of JPL. Discussions about the Deep Space Network, an international network of spacecraft communication facilities, renewed Shen’s curiosity. And prompted her to wonder if anyone had made art about it.

“Because it seems really important. And…I’ve never seen any art related to that,” Shen explains. She threw herself into research, attending lectures at the California Institute of Technology and engaging with astronauts and engineers on social media, to create detailed illustrations and design concepts of current and future space exploration endeavours.

To create her work, Shen uses her iPad, working with Adobe Illustrator, Adobe Photoshop, and Procreate. But step one is always heaps of research. “I guess I go through the information hoarding phase of research, where I’ll just look up everything that I can,” she tells me.

Which is where we find ourselves back at the Swiss cheese. Shen joined a brigade of community scientists taking part in projects that NASA extends to the public. As part of Capturing Onboard Summarization to Monitor Image Change (or COSMIC, for those short of breath), a project of JPL’s Machine Learning and Autonomy Group, Shen studied photos of Mars and outlined landscape features, so a computer could learn to recognize them. One of these features was the Swiss Cheese Terrain, pit-like structures on the planet’s southern pole.

Shen also processes images of Jupiter using raw data from JunoCam, the camera aboard the NASA spacecraft orbiting the planet. She explains that when the raw images come in, they are low contrast segments, so she uses Photoshop to adjust the colours and render the details visible. (Community scientists can upload their images onto JunoCam’s gallery, so the public can see Jupiter in all its swirly glory.)

Though this image processing is not for scientific purposes, Shen emphasizes that engaging with NASA’s output actively involves the public in something, quite literally, out of this world. “Almost all of NASA’s stuff are online somewhere,” she tells me.

NASA continues to inspire Shen as she creates illustrations for her own portfolio as well as commissioned pieces. For her illustration of the Perseverance rover landing on Mars, Shen used 3D models and slow-motion animations of the craft to get its details correct. She also consults NASA’s Eyes, digital visualization applications that display planets and spacecrafts.

Another illustration was for Ben Greaves, an engineer on a simulated Mars exploration mission in Hawaii. He was conducting research on growing plants for food in outer space and asked Shen to provide a visual for the research.

A friend of Shen’s, an engineer at the Deep Space Network, asked Shen to imagine the future of the organization, where they have a lunar base. Shen illustrated this projected extraterrestrial workspace, which she envisions on the dark side of the moon, where there is less interference for satellite dishes.

Shen’s work also played a role at the Analog Astronaut Training Center in Krakow, Poland. Crew members taking part in mission simulations wore patches that Shen designed. Some of Shen’s patches were also attached to a balloon that the crew launched into the stratosphere. She hopes that one day her designs will make it all the way into interplanetary space.

She also hopes to continue to communicate exciting and perhaps overlooked aspects of space exploration. We discuss how, especially of late, space exploration has been touted as the rich man’s lark rather than a complex scientific discipline. Shen stresses that space exploration goes beyond the “cool” factor of human spaceflight. “This isn’t just sending something out just because we think it’s fun,” she tells me.

For Shen, space exploration offers us the chance to answer questions about the origins of the universe and, consequently, ourselves. She wants to celebrate these feats of science and engineering and use her art to “help make that information more accessible and less like only scientists can understand it or only…space nerd people can understand it.”

And, importantly, Shen wants to tell the stories of the humans hard at work behind all of it. “I guess I thought, the work that they’re doing is meaningful. And I also want to make meaningful work,” Shen tells me. “So, I thought it would be cool to reflect that and also honour the people that are doing that really important science by making this art and being like, you’re awesome! I know people aren’t really thinking about you, but I’m thinking about you!”