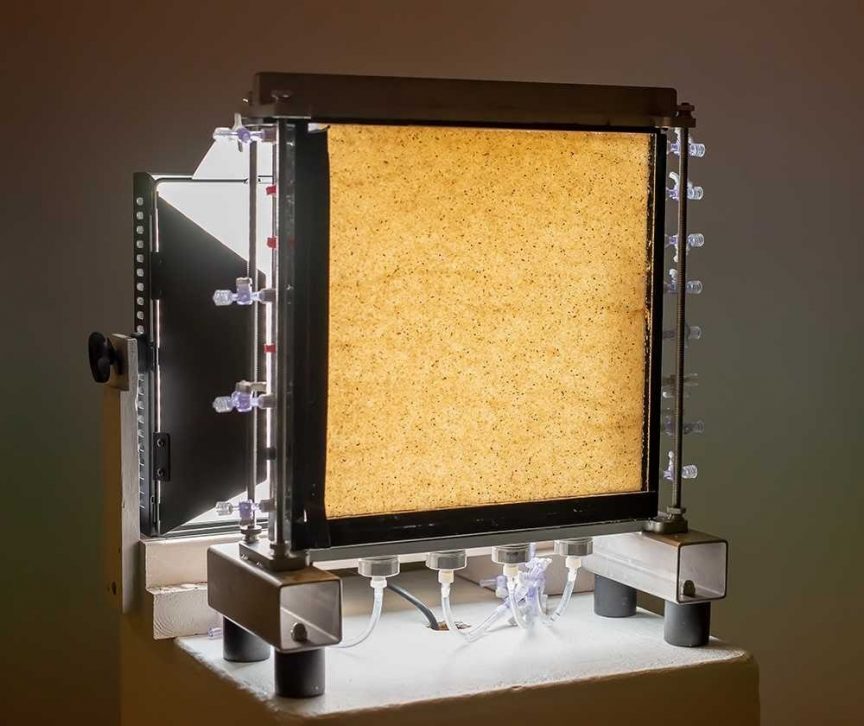 What happens when you put an artist in a science lab?

When Dr. Kevin Mumford agreed to host an artist at his environmental engineering laboratory at Queen’s University, he expected a painter or sculptor to appear. Instead, creative coder Owen Fernley walked through the door, marking the beginning of what would become a surprising and memorable two weeks for the research group.

From March 19 to 30, 2018, Mumford hosted Fernley’s Science Artist Residency. This program, facilitated by the Canadian not-for-profit Art the Science, immerses an artist in scientific research (Phase I), showcases the artwork inspired by the residency to the local community (Phase II), and shares a globally available version of the work online (Phase III). Fernley’s final work, Between the Sand, will be live in Art the Science’s digital Polyfield Gallery on December 5, 2020.

During the initial days of the residency, Mumford and his lab members introduced Fernley to their research interests and ongoing projects. One area the group studies is groundwater quality and how contaminants and chemicals enter, move, and transform below the surface. “Groundwater isn’t something that people see every day of their lives, but lots of people depend on it,” Mumford explains.

Additionally, by understanding how these chemicals move underground, the researchers simultaneously gain insights about how to remove the hazardous materials. “If we can understand how some of the fundamentals—physics, chemistry, biology, geology—how all of that works together, it’s sort of two sides of the coin,” says Mumford. “If we understand the processes, we know which processes could be manipulated or enhanced so that we can get those things out of the ground.” Therefore, another research focus is remediation of contaminated sites.

While browsing the ongoing projects, one, in particular, drew Fernley in.

The experiments consisted of injecting gas into a thin layer of sand fully saturated with water and pressed between two glass plates. The setup, which looks much like an ant farm, was lit from behind, allowing a clear view of a branching pattern emerging as the gas seeped through the space between the sand grains. The gas appeared darker than its surroundings due to its interaction with water causing light to be absorbed and refracted differently than in water alone. This meant less light could pass through wherever gas was present.

Former graduate student Cole Van De Ven, now a postdoctoral fellow at the University of British Columbia, was studying how the gas’s injection rate changed its movement and pattern as it infiltrated between the saturated sand. “Ultimately, what we were looking at was ‘How fast is a leak?’ ‘If a leak is fast, does it matter?’ ‘If a leak is slow, does it matter?’” he explains. The questions are relevant to addressing the numerous wells across Canada that currently leak gas.

Van De Ven was thrilled when Fernley decided to base his artwork off his Ph.D. work. “I was excited to see if somebody else understood [my research] in a different way than I did [and] could give me a different perspective on it,” recalls Van De Ven. “I looked at it as a learning opportunity for me.”

Working with Fernley was easier than expected. Since this was a pilot project, Art the Science selected an artist with a scientific background to determine how much prior science knowledge was necessary to complete the residency. Fernley’s previous training in geology allowed Van De Ven to skip over some of the foundational aspects of science while explaining his research. Fernley noted that future residents who lacked science training would benefit from a longer period spent in the lab.

Even though he had a scientific background, Fernley still asked a multitude of questions, which is the foundation of research. According to Mumford, “Good research generates questions as fast as it generates answers.” Fernley’s questions kept the researchers on their toes. He was unafraid to ask anything, big or small, and some of those questions were completely unexpected, which is what sparks creativity in science.

Mumford recalled one instance that culminated from Fernley’s endless questions, curiosity, and engagement with the lab’s work. After a week of examining Van De Ven’s glass-walled experiments and staring at images of sand grains and gravel pieces, Fernley firmly stated, “It’s the space that’s really interesting.”

“That was like 10 years of my life in one sentence. That visual concept of what he would think of as negative space, right between the grains [of sand], is where we live our lives.”

Fernley’s creative coding artwork started taking shape by the end of the residency. As his time with the Mumford group came to a close, he showed the researchers his “Sand / Code” project, which digitally simulated the distribution and colour of the saturated sand grains pressed between the glass plates.

As the coding project evolved, it turned into Between the Sand, an artwork that does not simply reflect the experiments’ sand grains, but also the space between them. Fernley first showcased this work in 2019 as an exhibition at the Modern Fuel Artist-Run Centre. This Phase II residency component engaged the local community in current research undertaken by scientists within that community.

In the time since then, Fernley has developed a version of Between the Sand for Phase III of the residency—a digital form to be shared globally via the web. This mesmerizing, interactive, and educational work will be available in Art the Science’s online Polyfield Gallery on December 5, 2020.

Between the Sand is essentially a digital representation of Van De Ven’s experiments. After launching the artwork, viewers can take control of their own journey through the contamination process. After initiating the artwork by clicking anywhere on the sand-filled screen, a dark pattern representing gas slowly permeates throughout the sand grains following the Invasion Percolation model, an algorithm used in environmental engineering research and known for following predetermined pathways. Viewers may adjust variables, such as flow direction, pressure, and diffusion, to see how these factors alter the contamination pattern in real time. These features are just a few that Mumford and his researchers consider during their experiments.

“It resulted in a product that we recognize,” Mumford remarks about the final work from the residency. “We recognize that he has captured some of the essential features of [the experiments], but very much in his own way.”

Van De Ven adds, “I look at Owen’s [artwork] sometimes and think ‘That looks more like the real thing than what [our models are] doing’ because we’re held back by the physics or the chemistry of that system…Owen had no rules in a sense. He wanted to replicate what it looked like, and he did that by any means he could.”

In the end, the Science Artist Residency widened the Mumford group’s understanding of art and its possibilities. Both Mumford and Van De Ven admit they had narrow views of art when they first agreed to take part in the program. Hosting an artist in the lab has been the first step to opening their eyes to the wide spectrum of art and the connections between art and science, especially regarding creativity.

“Some of the best technical solutions, not only do they come from creative thinking, they require it,” explains Mumford. “To me, creativity provides the link between [scientists and artists], which means they aren’t as far apart as some people might think.”

This is the first of two blog posts chronicling the Between the Sand Science Artist Residency.