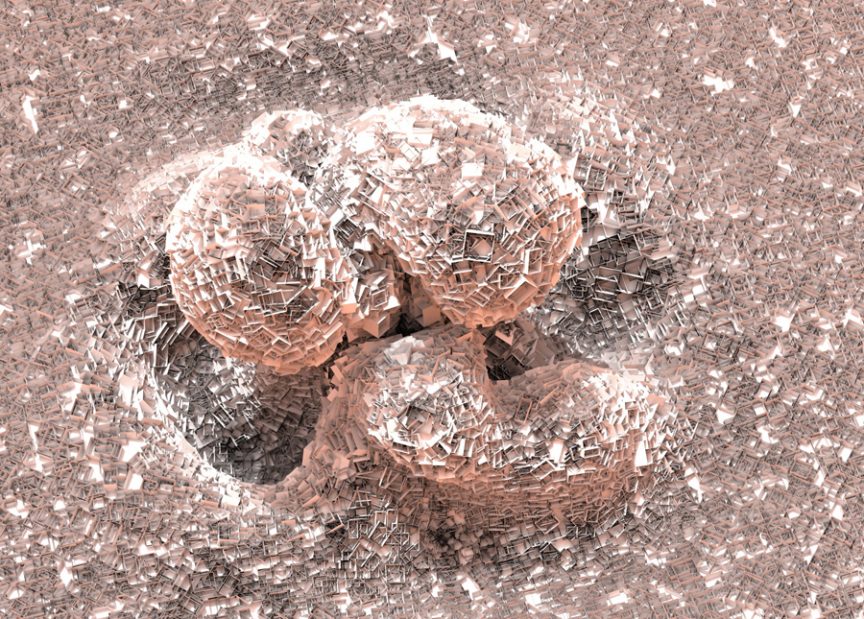 It’s difficult to tell which came first, temporally. As soon as our family got our first computer in the 1980’s, I was writing programs to draw things, usually mathematical things. This quickly progressed to drawing things using physics. I had no idea that anybody else was doing this, much less that there would be university courses on it.

The science took over through college, but technical drawing and making data beautiful were always on the back burner. One fine day in 2000, I was debugging some ugly Fortran 77 code for a fluid simulator, and instead of looking for the bug by poring over hundreds of lines of code and numerical output, I decided to render the computational elements as connected cylinders in a white room (because I knew that light transport among the cylinder stew would reveal a three-dimensional structure in a two-dimensional image). The very first image that emerged was not only astoundingly beautiful, but led me right to the bug. By then, though, I didn’t care much about the bug in the code, but the bug that that image planted in my head. Later that year I created what I consider to be my first piece of professional artwork. 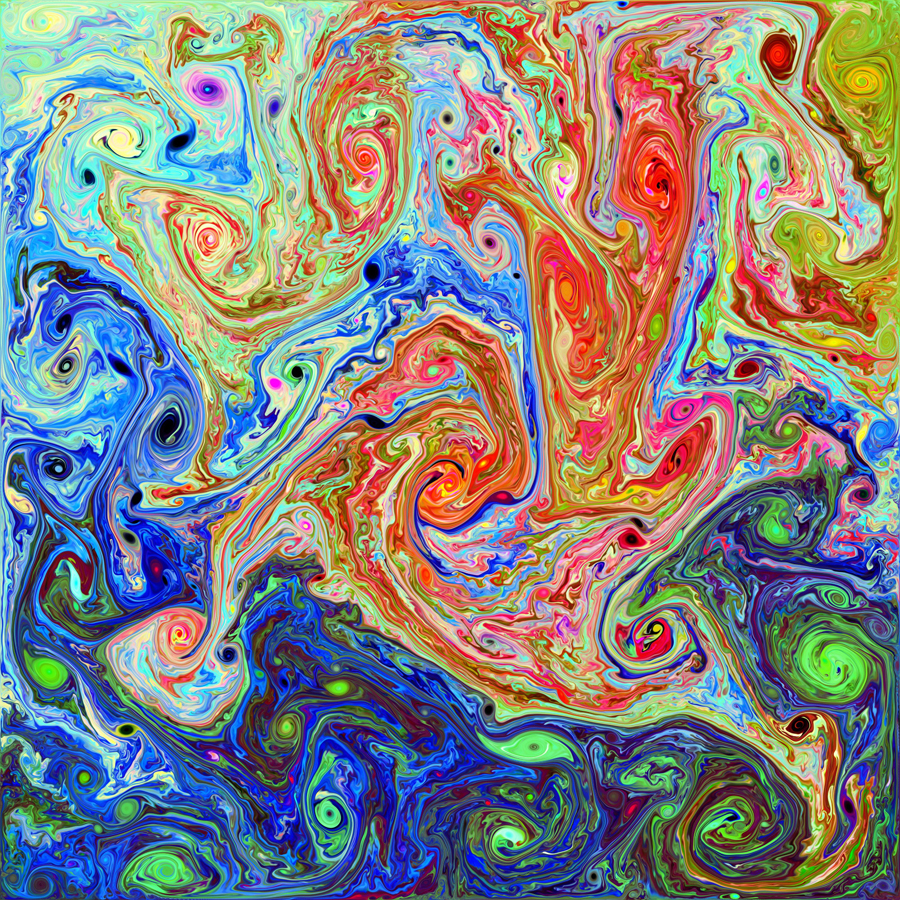 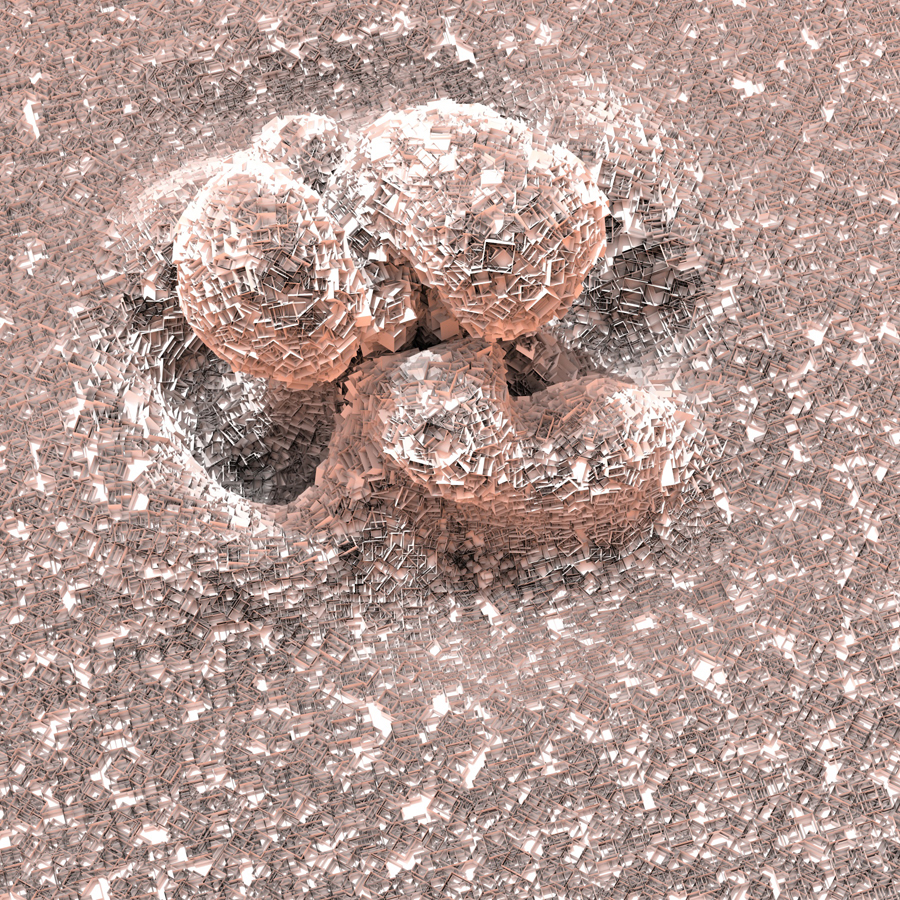 My graduate research was in aerospace engineering, but the subfield that most informs my work is undoubtedly computational physics. Underlying that, though, are a number of fields: computer science and algorithms, numerical methods, physics, differential calculus, applied aerodynamics, computer graphics, and high-performance computing. And I try to keep up to date in some peripheral fields, such as complexity theory, biological growth, astrophysics, and geomorphology. 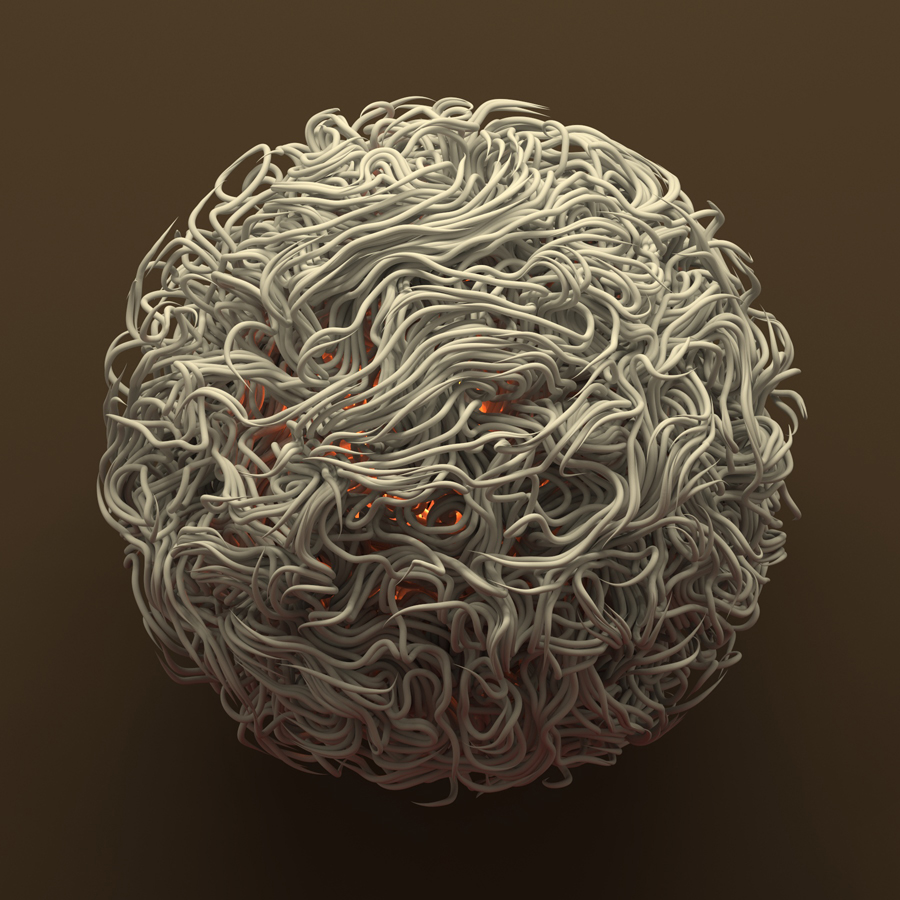 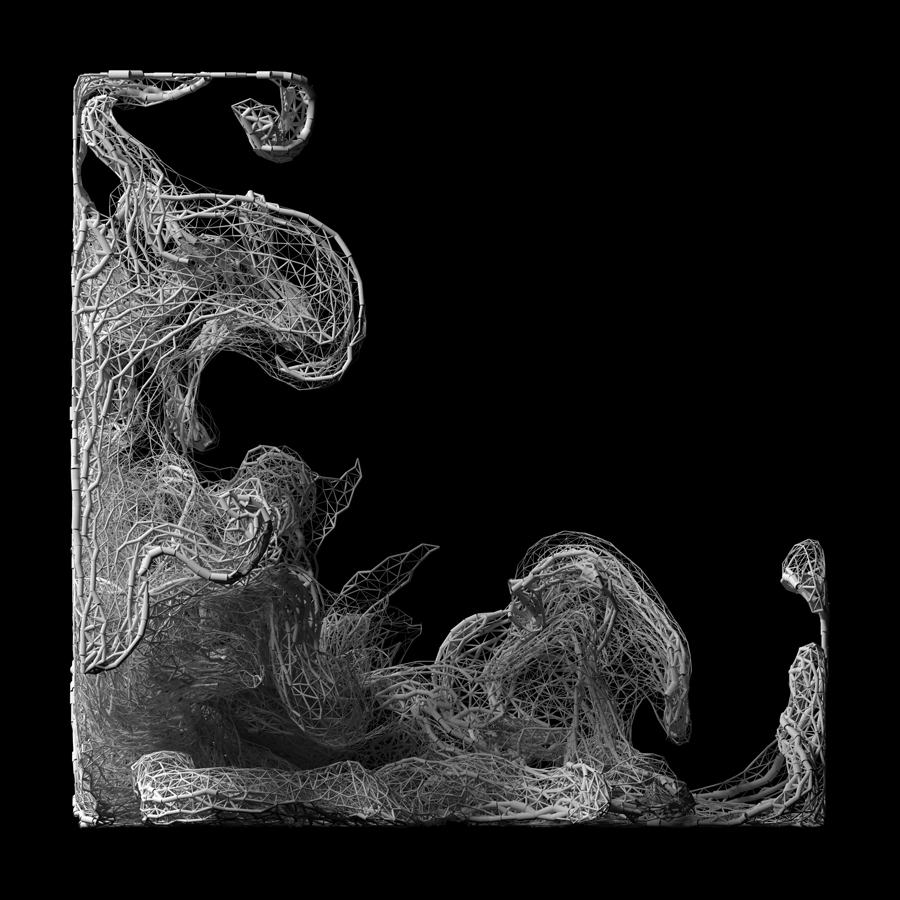 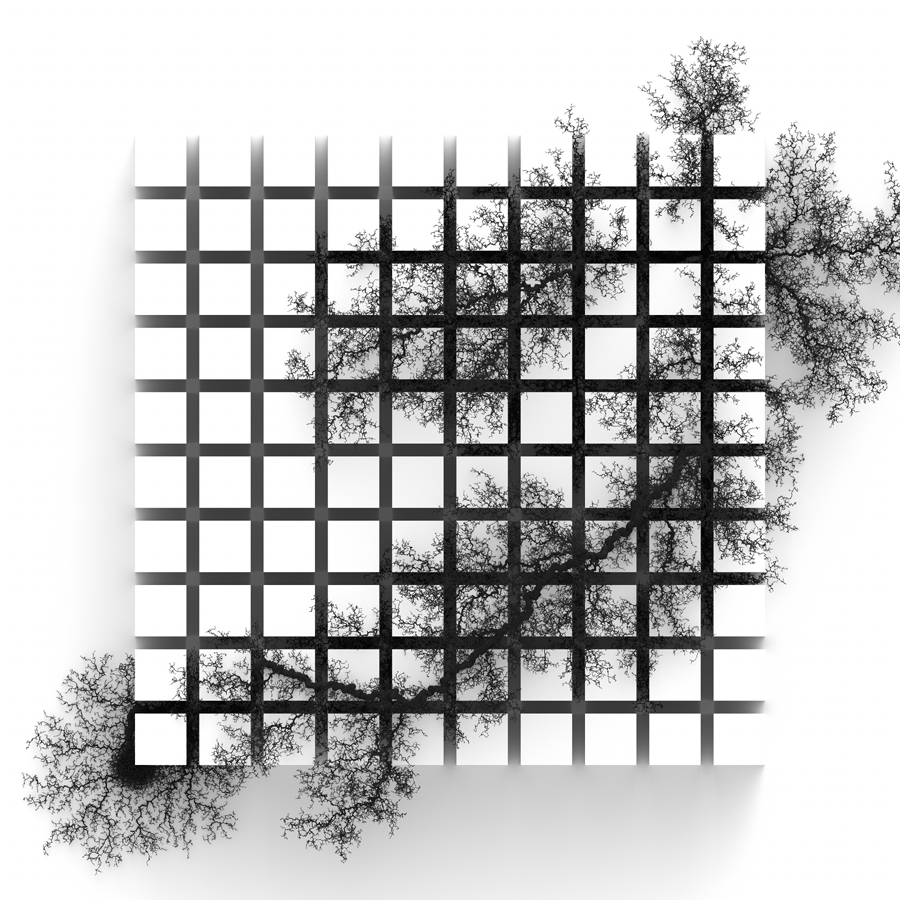 The process has always required computers, often high-performance computers, but until a few years ago, the output was simply video or prints on paper. More recently, I’ve been printing larger works to canvas, glass, and metal. I’ve created some interactive works, which require either a Kinect and screen or Oculus Rift. I started making 3D prints about 10 years ago, but not in earnest until about 2013, and I focus on Selective Laser-Sintered nylon for its strength, flexibility, accuracy, and optical characteristics. In late 2015 I began making sculpture of my fluid forms using techniques from 3D printing, but performed manually. These sculptures are in EPS foam, plaster, and paint, and require hot-wire cutters and a CNC mill. The sculptures are a fulfillment of an old dream to bring these computational shapes off the screen and into my physical space.

Many of my influences are artists and scientists who have bridged the gap between those disciplines: Da Vinci, Piranesi, and Vermeer from the pre-computer eras, surrealists Yves Tanguy and Salvador Dali, Jackson Pollock, early algorithmic artists such as Roman Verostko, Jean-Pierre Hebert, Manfred Mohr, and Sol Lewitt, mathematicians and scientists John von Neumann, Benoit Mandelbrot, Per Bak, Albert-Laszlo Barabasi, Claus Mattheck, and Stephen Wolfram, photographers Yann Arthus-Bertrand and Bernhard Edmaier, computational artists Eric Heller, Golan Levin, and Karl Sims, and VR artist Simon Penny, along with everyone with a camera at NASA and numerous parallel algorithm designers. I am sure there are more, but I think that’s enough to fill anyone’s reading list.

Most of my exhibitions have been group shows; but among those, I am most proud of my 7 appearances in the SIGGRAPH Art Gallery. I am also especially happy to be represented by SENSE Fine Art, who featured my work at a recent Art Silicon Valley. 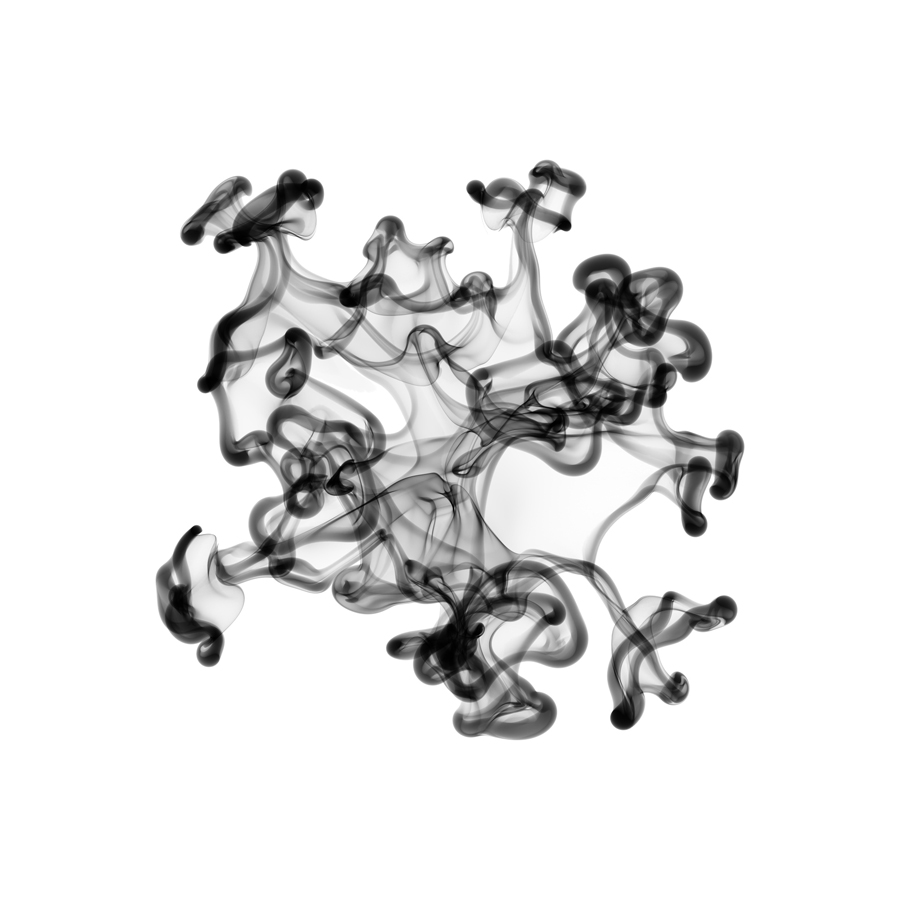 MESO from Mark Stock on Vimeo.

Despite the popularity of art-science crossovers, there still seems to be an ideological rift between the two, with scientists tending to view art as a distraction, and artists dismissing scientists as too literal or rigid. There is an implicit expectation, even at the highest levels, that a person cannot be both a whole scientist and a whole artist. I’ve worked very hard over the last 15 years to build a strong foundation in both worlds, seeing each as valid and important parts of a new whole. What I struggle with the most is to find success at understanding the theory and context of my artwork to the depth that I do for the underlying science, and especially not to short change either world as I create and present my work.