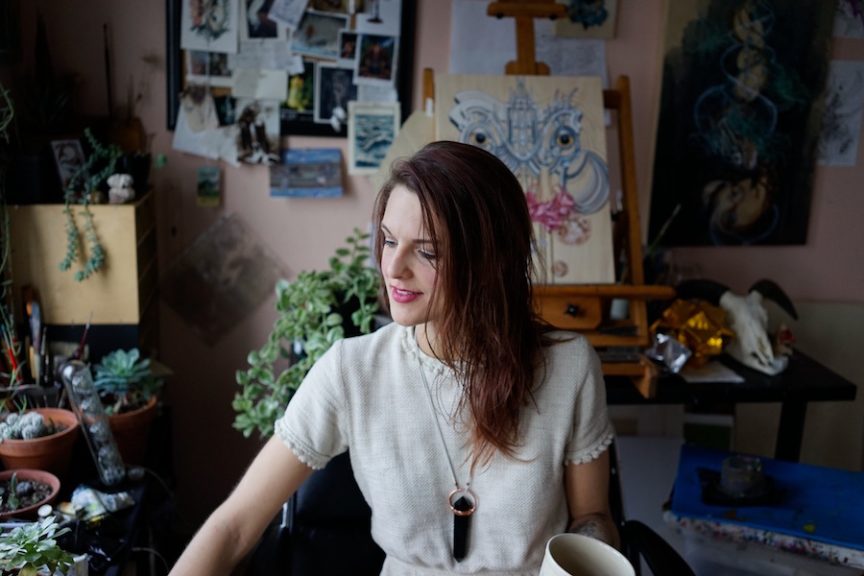 Science and art have been inextricably entangled from my very first memories, therefore one has never existed without the other. My first vivid recollections are that of my mother telling every person we met about my ability to blend colors and render detailed tree leaves while, at the same time, taking it upon myself at a very young age to memorize all two hundred bones in the human body. Both of my parents work in the medical field and having no exposure to television or pop culture, I was left to spend long days alone pouring over my father’s medical textbooks. Looking back, after having received my scientific illustration certification, I realize that I fell in love with those beautifully rendered illustrations of human anatomy, while becoming utterly fascinated with the way our body works as a complex organic machine. 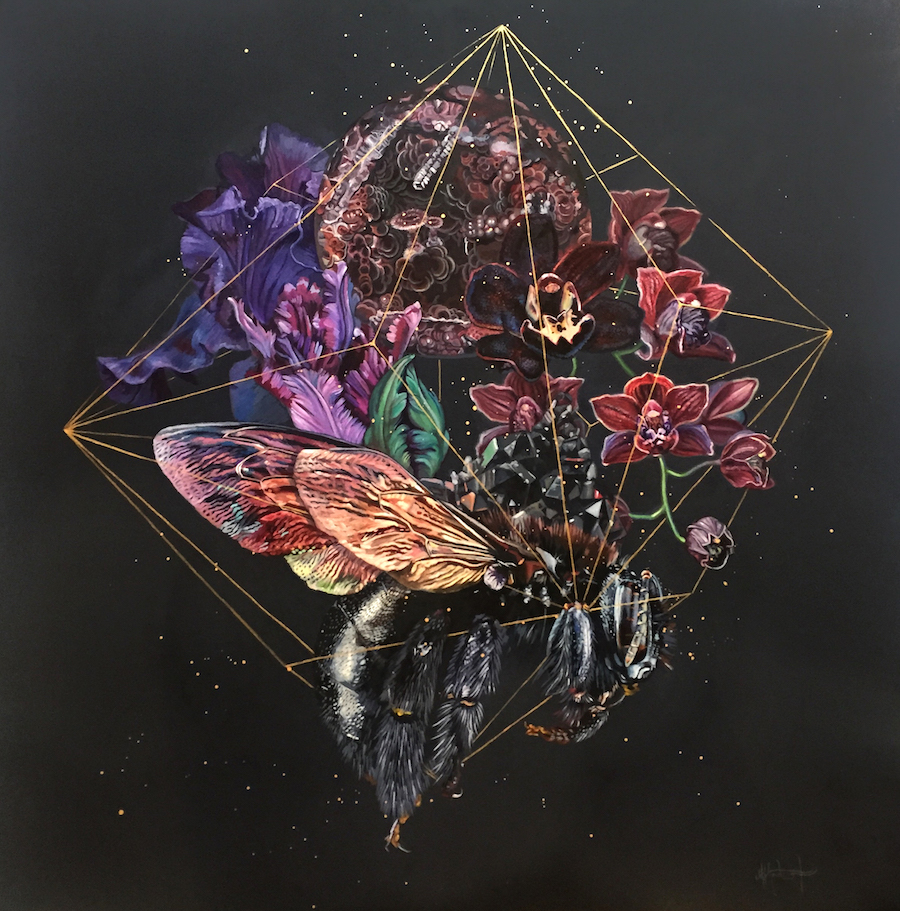 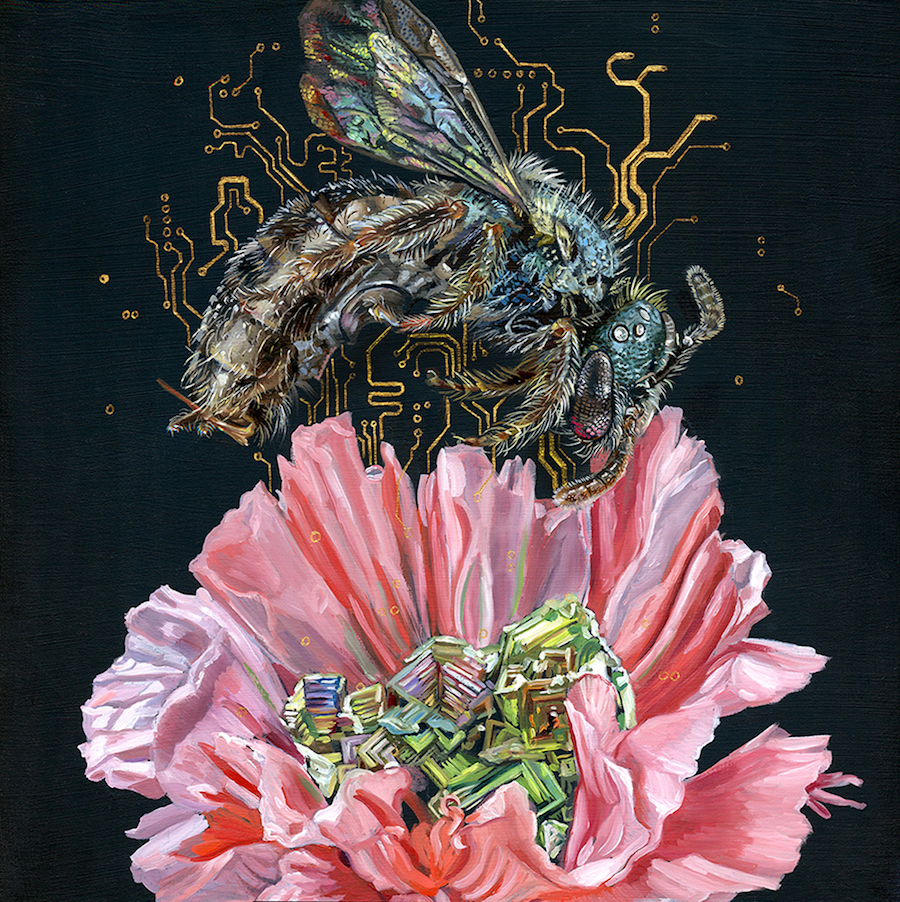 Which science relates to your art practice?

My artistic exploration mainly revolves around of the process of adaptation and evolution. Our one constant in this world is change and all living organisms are coexisting in an intricate dance, redesigning themselves in unison and varying complexity in awe inspiring ways. There are hundreds of examples of striking adaptations within a species and I recently learned about one in particular that was absolutely lovely. The orchid mantis. Not only does this mantis camouflage itself by mimicking a complex flower, it also takes the facade one step further by undulating when it walks as if it’s a plant swaying in the wind. Another example of adaptation which drives my curiosity is that of a newly discovered fungi, Pestalotiopsis microspora, which breaks down polyurethane plastic. Where exists an ample food source, a species will evolve to use it as fuel. We are witness to these examples of evolution within the span of our own lifetime and the thrill of it drives my creative practice. I am compelled to paint the beautiful structures of organisms and highlight their inter connectivity. 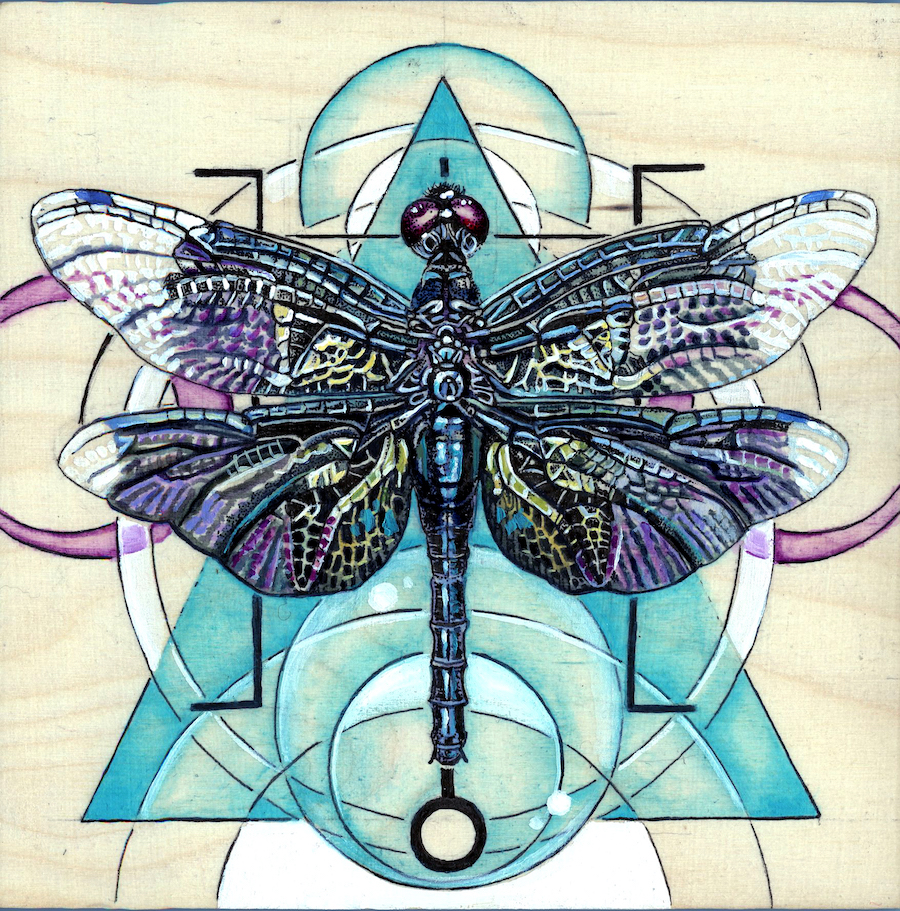 What do you use to create your artwork?

I first and foremost use oil paint. It responds to a variety of techniques such as glazing, accurate color mixing, application of texture and it thins down to the perfect consistency to create fine, fine details such as the individual hairs of a bee. The technicality of painting is a scientific practice in of itself.  I possess a large collection of medical and invertebrate textbooks (Gray’s Anatomy is a winner), books containing SEM (scanning electron microscopy) images of microscopic creatures (protozoa, diatoms and pollen), insects and my favorite current subject, fungi. My studio is filled with plants, beetle specimens, crystals and bones, which are useful for observation and inspiration through my dissecting microscope. I also frequently peruse the internet for captivating images and keep a large collection on hand for digital references. I delight in finding visually arresting mathematical and geometric diagrams, which describe underlying patterns in nature. 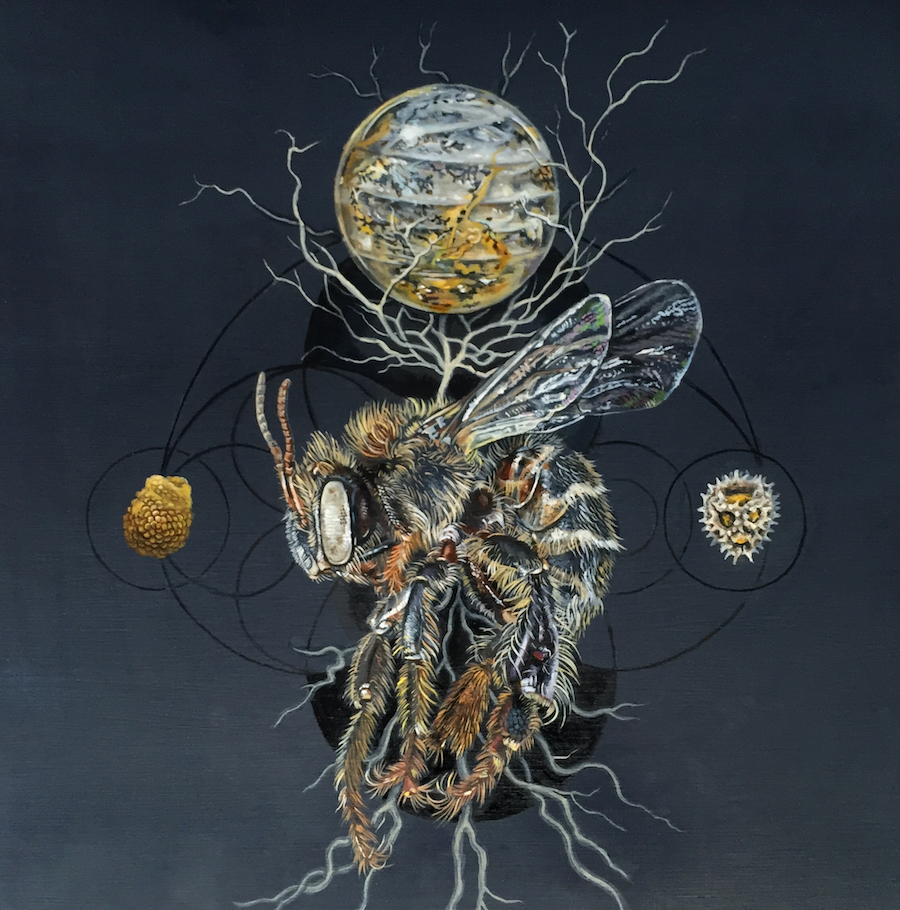 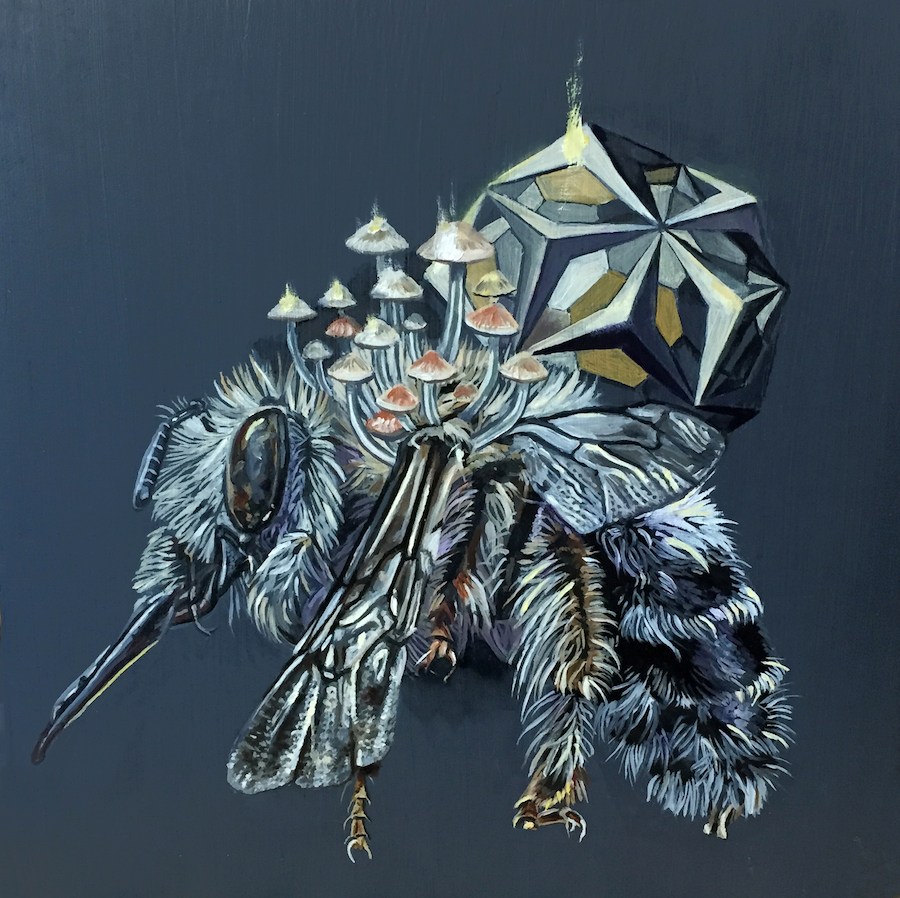 Exhibition you are most proud of:

One of my favorite aspects about being submerged in my world of painting is the type of individuals and opportunities which present themselves based on the imagery and symbolism I choose to explore. One of these opportunities came about through a neuroscientist named Immy Smith who included my work in an exhibition she organized in the UK during British Science Week. Through my artwork I’ve encountered and collaborated with various fascinating, intelligent people: Entomologists, Geologists, Astrologists, Tea Masters, Engineers and most recently Deep Sea Explorers, which has resulted in the creation of an illustration project documenting Yellowstone Park creatures for the Global Foundation for Ocean Exploration. 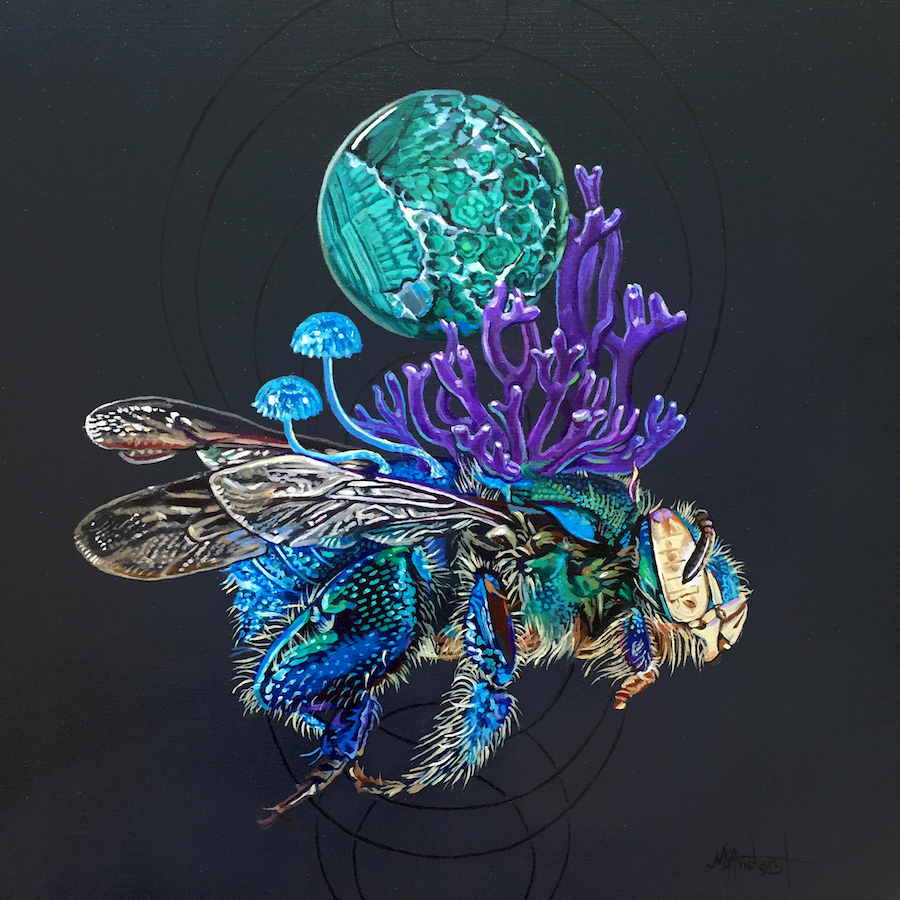 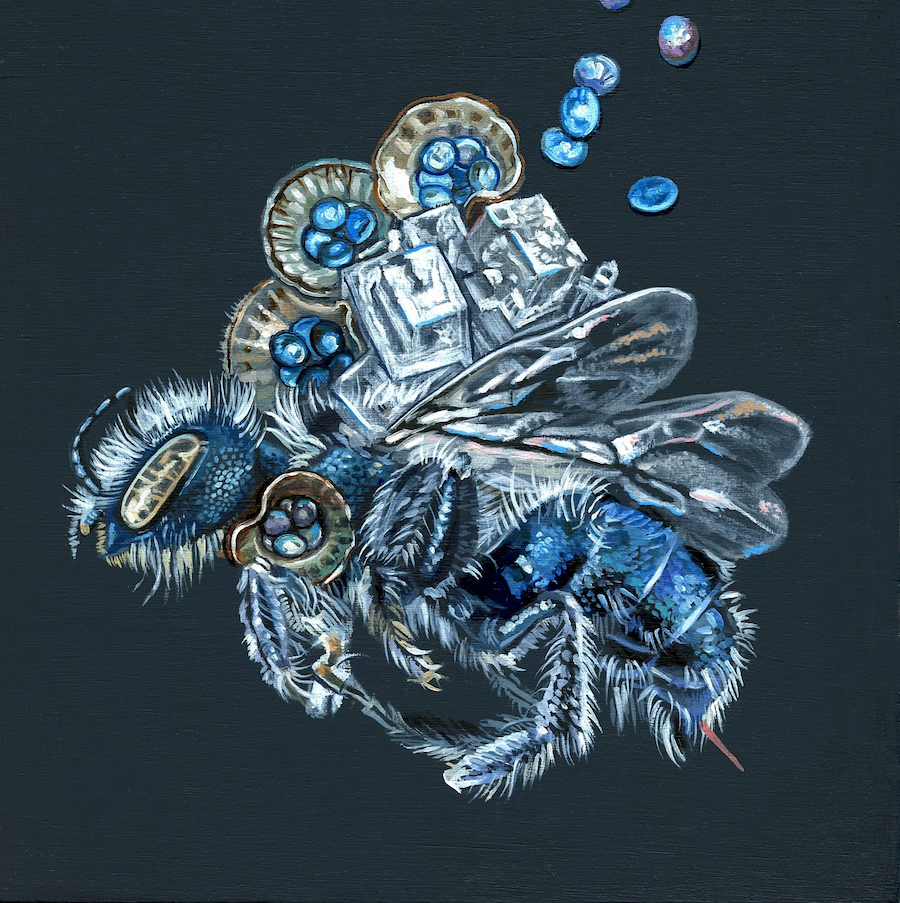 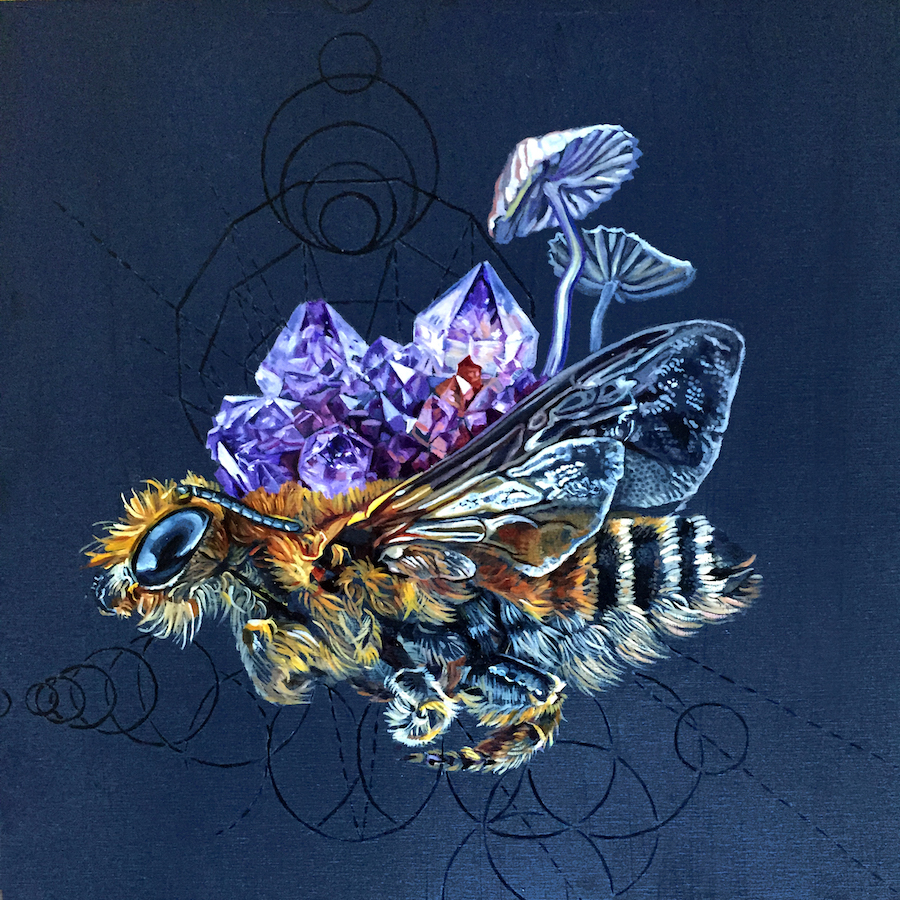