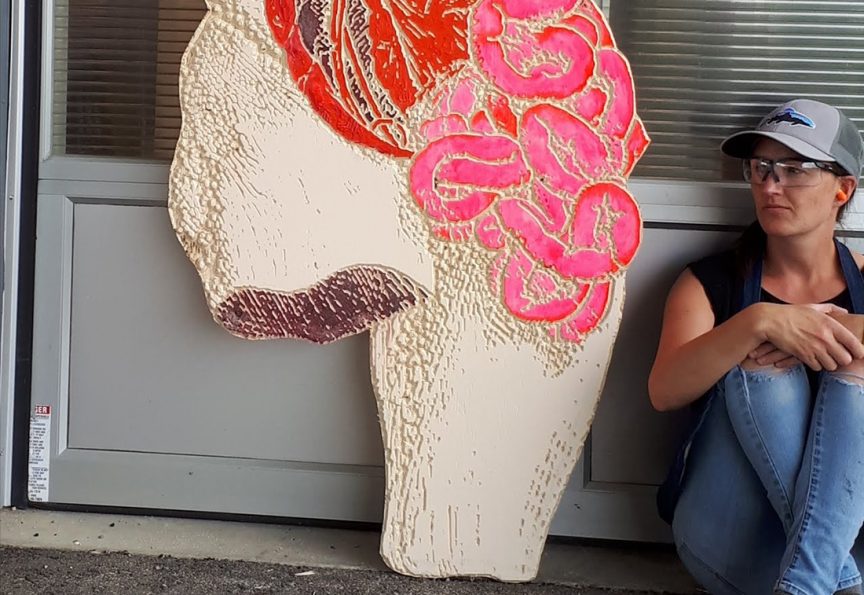 Science arrived unexpectedly. I survived cardiac arrest in my second year of university and subsequently discovered that I have a cardiac electrophysiologic disorder called Long QT Syndrome. I rely on an implanted defibrillator to maintain regular pace and rhythm. I became interested in how one’s sense of embodiment and identity become profoundly affected by illness, diagnosis, and recovery. I eventually went to art school to explore what it means to be dependent upon a mechanical device for survival, to inhabit a cyborg-like existence as both biological and artificial.

I am most interested in human anatomy and physiology. Specifically, biomedical implants, cardiovascular genetics, and cardiac electrophysiology.

I primarily work in printmaking with a focus upon embodiment, medicine, and technology. As a printmaker, I work in intaglio, relief, and screen printing. I have also used portable defibrillators, hospital gowns, disposable electrodes, hospital equipment, medical audio textbooks, and found ephemera. Informed by medical humanities and patient experience, I use these materials and methods to explore the intersections between fragility and resilience; the biological and the artificial; private and public; and decay and resuscitation.

Chart II: Manikin, is my newest interactive work, inspired by anatomical flap books. It is a painted woodcut that allows the viewer to dissect a topographical body and reveal it’s layers. It was carved using a CNC router, which is a computer controlled cutting machine. It is a reductive milling process in which a robotic arm carves material away based on points plotted on a grid. It allows me to work on a large scale and the technology carves surfaces in ways that would not be possible by hand. The depth and style of the carving has a topographical aesthetic and for me, the materiality of thin layers of veneer is rich in meaning and significance as both object and metaphor. There is physical weight to the work, which I feel is necessary. Organs are hung by metal rods, which signify surgical rods. It enables the viewer to de-constitute and reconstitute the work so that it becomes a performative object.

Artists have been using CNC machines since the 1970s. I believe the first woodblock carved by CNC router was created by Missouri artist Mike Lyon in 2004. My own interest lies in how technology can be creatively applied in the interplay between digital and analog, natural and manufactured, biological and artificial, virtual and real.

I still have a desire to work with my hands. The physical act of painting, inking, and printing is still a significant part of my practice. There are printed woodcuts that reference the painted woodcut.

Dr Anna-Maria Choy is a Senior Clinical Lecturer in the Centre for Cardiovascular and Diabetes Medicine University of Dundee, Scotland. She has worked on human and molecular studies of cardiac potassium channels. Her clinical studies were among the first to definitively show that the period following the conversion of atrial fibrillation is one of very increased risk for QT prolongation and associate arrhythmias. She discovered that in congenital LQTS (with human ether-a-go-go-related gene mutations), infusion of potassium can correct QT abnormalities. In layman’s terms: people with LQTS-related heart arrhythmias should eat more bananas.

My current work is influenced by the anatomical body as portrayed through movable forms of flap anatomy. I am currently looking at E. J. Stanley, an early 20th century medical illustrator whose flap anatomy is found in Frank Scholl’s Library of Health. Flap books compel the viewer to reveal what is concealed, by participating in a virtual autopsy.