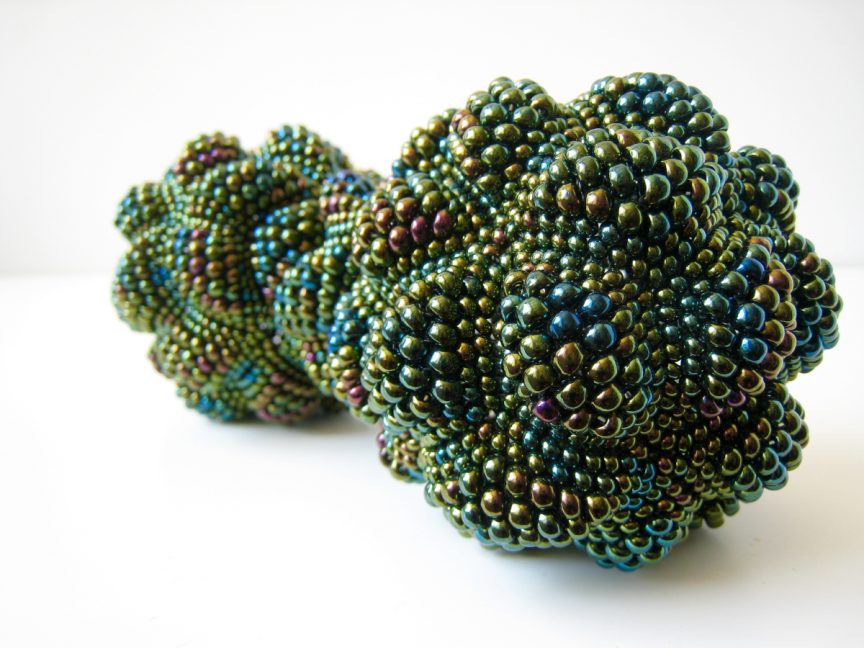 I have always loved both. I have clear memories of learning about the body’s biological systems in Grade 2 and also weaving a pair of slippers that went to the National Gallery of Jamaica in the same grade. When my high school art teacher suggested that I study architecture after graduation, it seemed like a good fit because I was always vacillating between the two. It was only relatively recently, after reading Julia Cameron’s The Artist’s Way, that I realized that I am an artist first. That book brought so much clarity to my soul. So now I would say that art comes first, but for the majority of my life, it didn’t.

It’s funny that I mentioned biology earlier because I would say the study of math and nature is something I constantly think about. I don’t incorporate biology in a literal way; it’s more that I am inspired by the relationship between nature, beauty, and geometry. I think of my work as organic geometry. It is abstract and determined by the medium. I find it fascinating that there is geometry all around us in the natural world. People often look at my work and say it reminds them of a sea urchin or a blackberry. I am not trying to imitate these things, but I think most people are not fully conscious that so many natural things are geometrical because they are so organic and beautiful. And I am not just thinking of the classic divine ratio in pine cones, for example. I am thinking of more simple and pure things like the perfect pentagons in petunias, the hexagons and triangles in fruits and vegetables, the fractal patterns of leaves and trees. And of course spheres; spheres are everywhere. So I try to make beautiful geometric things, and I love when someone says that one of my bowls reminds them of a sea urchin or anemone.

“I find it fascinating that there is geometry all around us in the natural world.”

I use seedbeads and fishing line. My artworks are made by stitching tiny glass beads together by hand. I discovered bead-stitching in 2010, a year after my father died. It became a kind of therapy. I experimented with lapidary work too, but the bead-stitching was more portable as my husband and I moved around a lot for some time. Then I turned to it again in 2013 when I was undergoing treatment in New York City for 2 years for a blood disorder I have that is now a chronic illness because it is incurable. I could work on my little beading projects on a laptop tray in bed. As I realized that I would probably never go back to an architectural career, the beading was all I had for a long time. I find it a really unique medium that is both rigid and flexible at the same time. It appeals to both my technical, methodical side and my creative side, much like architecture did. When I discovered that it had sculptural potential, that’s when I became really hooked, and I am driven to take it as far as I can.

My first exhibition at UpTown Gallery in Waterloo in 2016. A lot of things fell into place that year. I found a beautiful and affordable studio to start my practice, my application to UpTown Gallery was accepted, I was contacted by you guys (Art The Science) for an article. I had just moved to
Canada a year before and was trying to carve out a new path for myself. Being identified as an artist for the first time was scary, but I felt like the universe was giving me a sign that I was headed in the right direction.

“Being identified as an artist for the first time was scary, but I felt like the universe was giving me a sign that I was headed in the right direction.”

I am not deep into the science world. Popular ones like Einstein and Tesla fire my imagination. My favourite architects are Shigeru Ban and Santiago Calatrava. As far as art and design goes, I often think about L.C. Tiffany and Steve Jobs, in that they actively sought to marry functional objects with beauty. I believe that there is a function to beauty, like a structural principle or a law of nature. When you create anything that combines the principles of nature/science with the principles of beauty—a computer, a bridge, architecture—you have something transcendent that changes the world. That’s what nature teaches us. The golden ratio is not fascinating because it is mathematical, it’s fascinating because it is beautiful, beautiful math. The same with the original iPhone, with Calatrava’s engineering, with Buckminster Fuller’s geodesic domes, with Tiffany lamps. I am deeply inspired by these things.

I was recently awarded a grant from the Canada Council for the Arts to create digital content during the COVID Pandemic. So I started a YouTube channel.