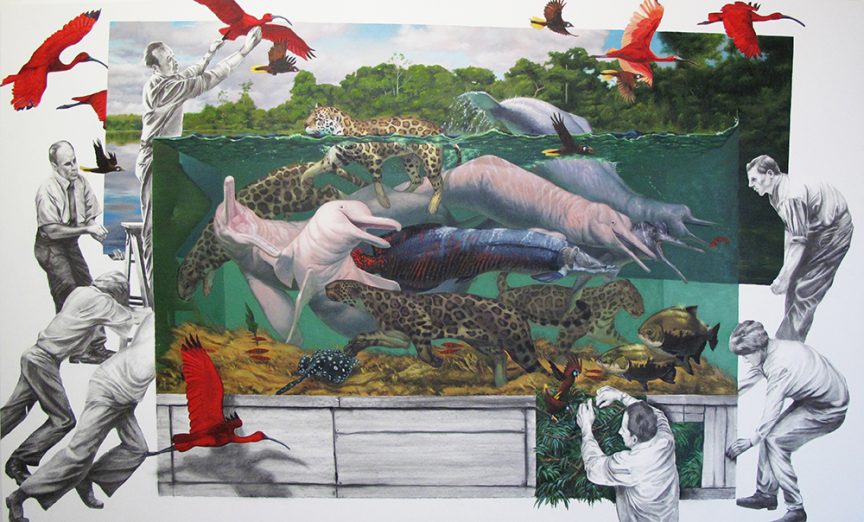 
​Honestly the two developed in tandem from a very early age. I have always been fascinated by the natural world and translating that world into a visual medium. I have drawn ever since I can remember, and am constantly pestered to go through box after box of sketches of animals and dinosaurs when I go home to see family in San Diego. I often see an alternate career as a scientist branching off from my timeline, but I’m very happy that my work allows me to indulge in the research and exploration of so many fascinating subjects. 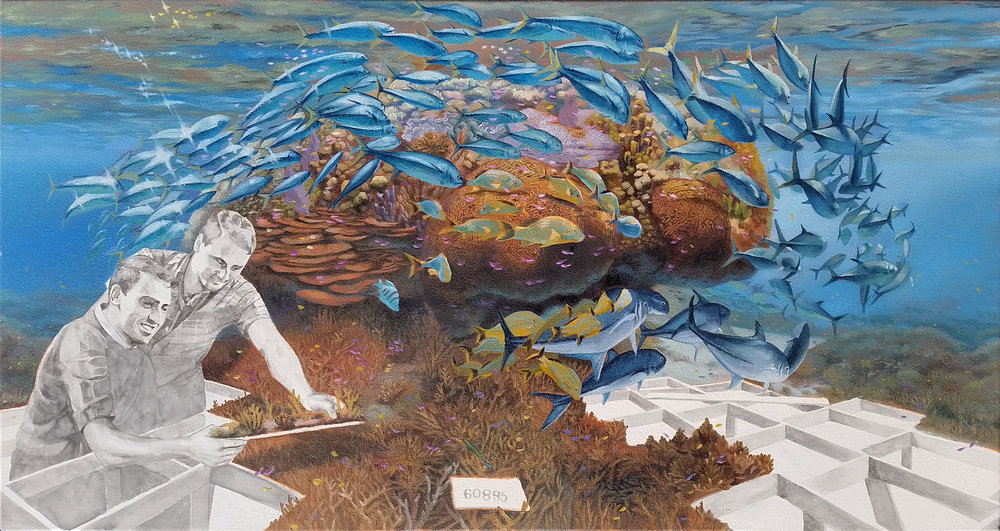 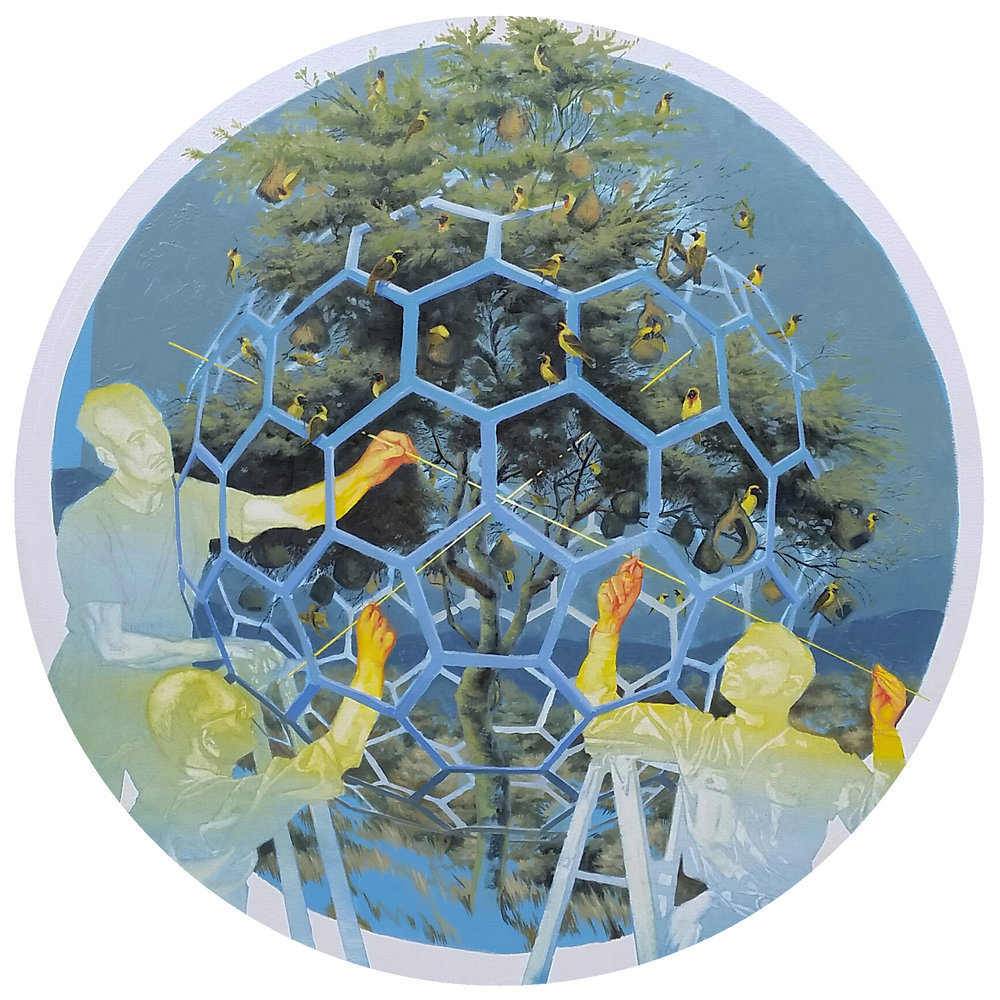 ​Evolutionary biology and zoology are a pretty consistent thread running through my work. I have a fascination with the interconnectedness and interdependence of organisms within a given biome, as they represent a complex yet delicate system that has developed over hundreds of millions of years. ​ 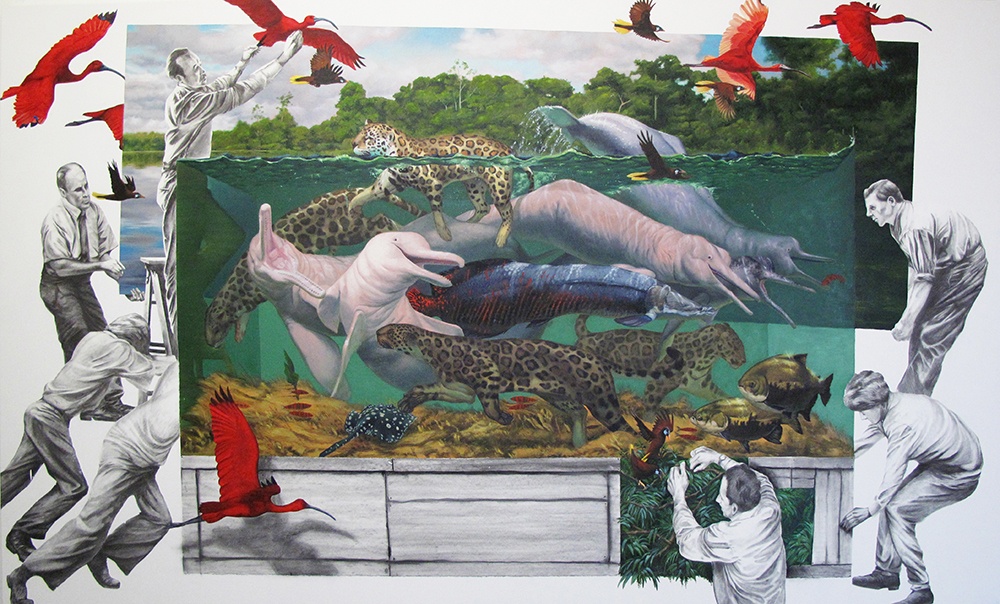 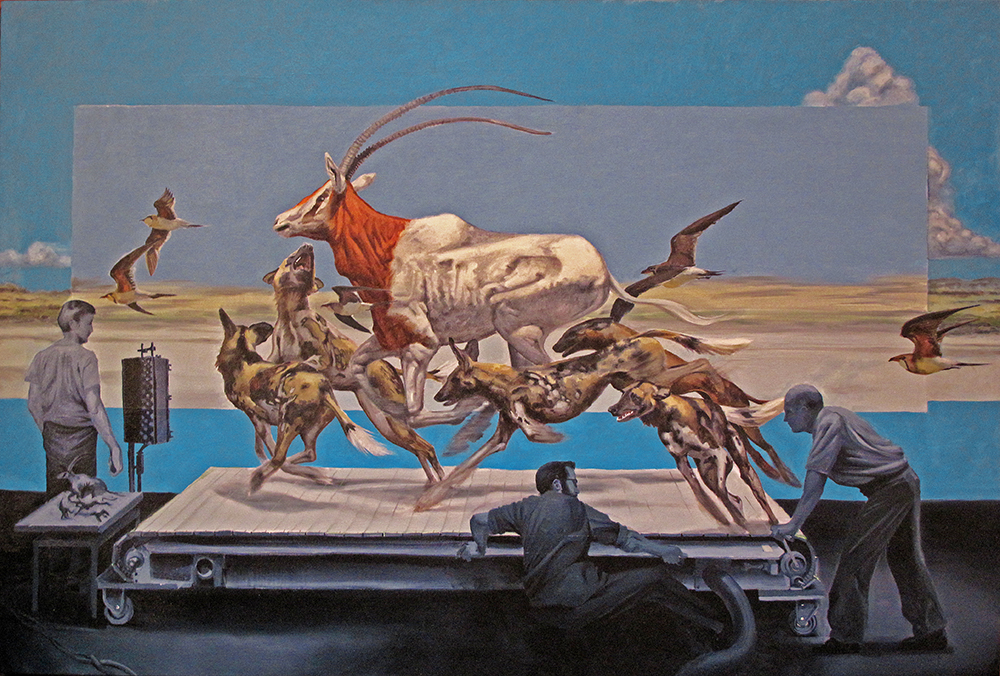 ​My work is largely executed in oil on canvas,​ with ties to the rich tradition of oil painting throughout art history. I find that oil has a richness and versatility that is conducive to the wide range of gestural movement, textural variety, and subtle nuance of animal life and the environments they inhabit.  But, I have recently tried to find a technical language that can translate the often tenuous relationship between these natural systems and the human elements they are inexorably tied to. I have found that by executing the figurative elements (all of which are drawn from the American Museum of Natural History’s archives of the the construction and maintenance of their diormas) in a charcoal or watercolor on paper that is then adhered to the oil-painted canvas, I can flip the script of artifice vs. ‘reality.’ In effect, I physically integrate these figurative elements into the larger natural system with which they interact, but simultaneously keeping them technically separate. It is a process that has presented various challenges but in exploring this new direction, I’ve found that it has allowed me to explore my own perception of this relationship in turn. 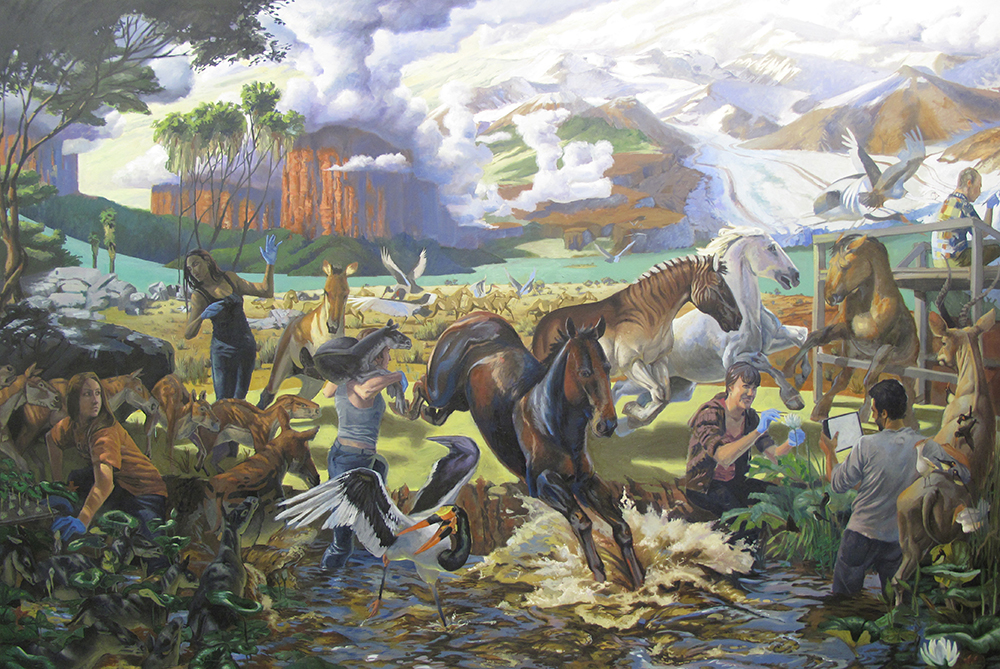 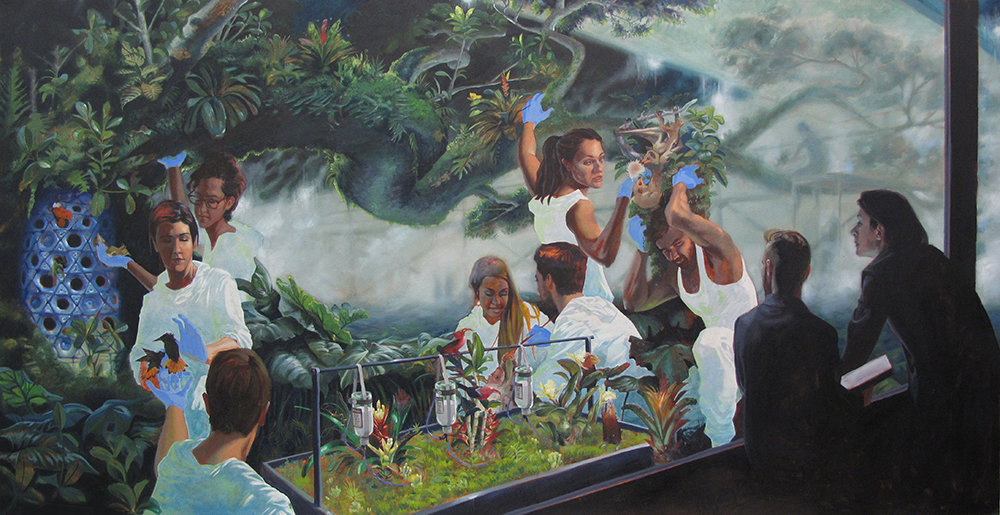 ​I am fond of the triptych paintings I completed during my Masters thesis at the New York Academy of Art. “Polynya,” “Erg,” and “Cerrado” were ambitious in scale and subject matter, and gave me a chance to really open up my brush work in a large format, which I found very liberating. I also really enjoy working on my newer pieces, which incorporate photographic reference from the library archives at the American Museum of Natural History. They’ve presented new challenges that I’ve found have really invigorated my practice and allowed me to translate the often complicated relationship between humankind and the environment. 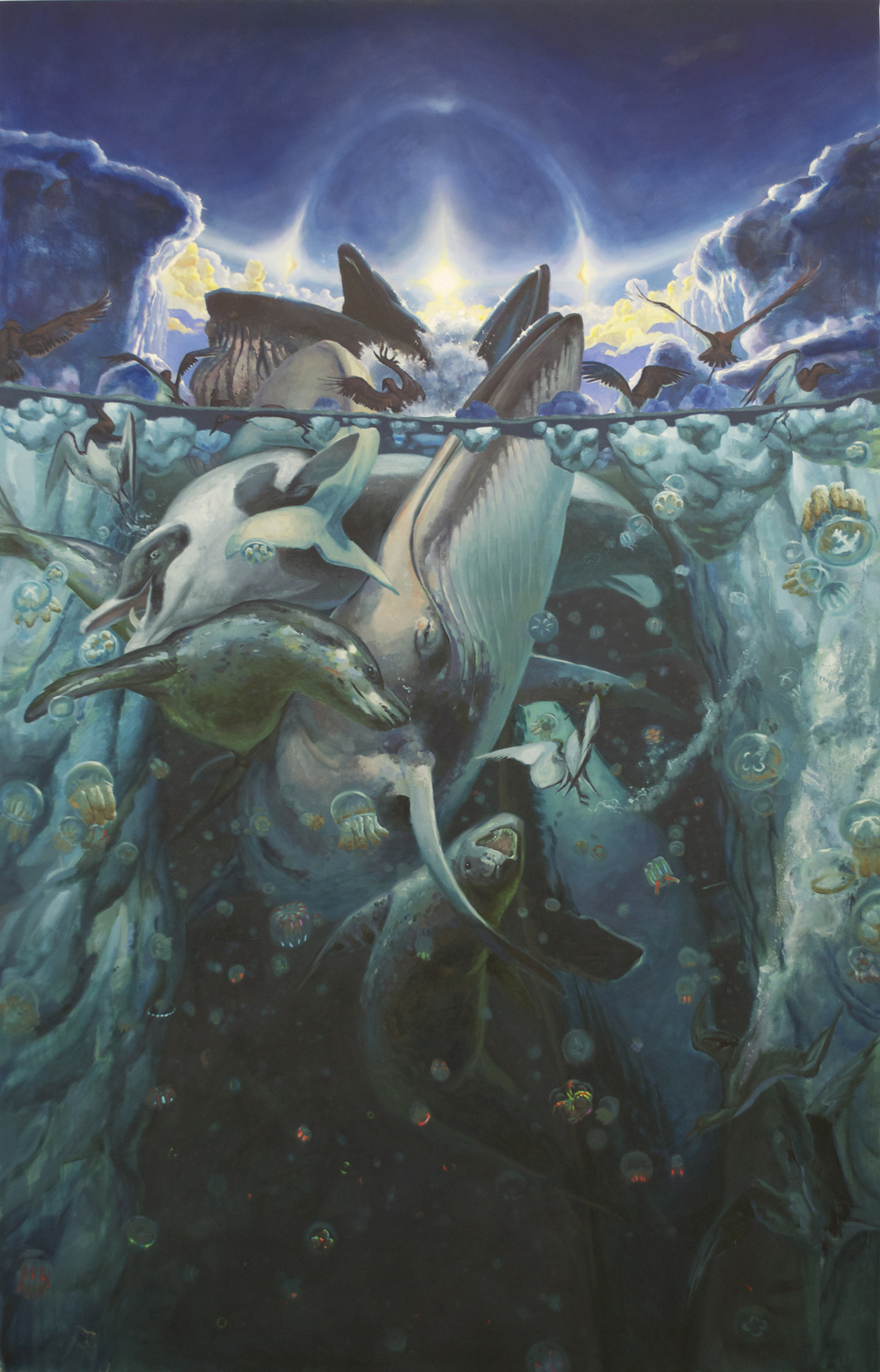 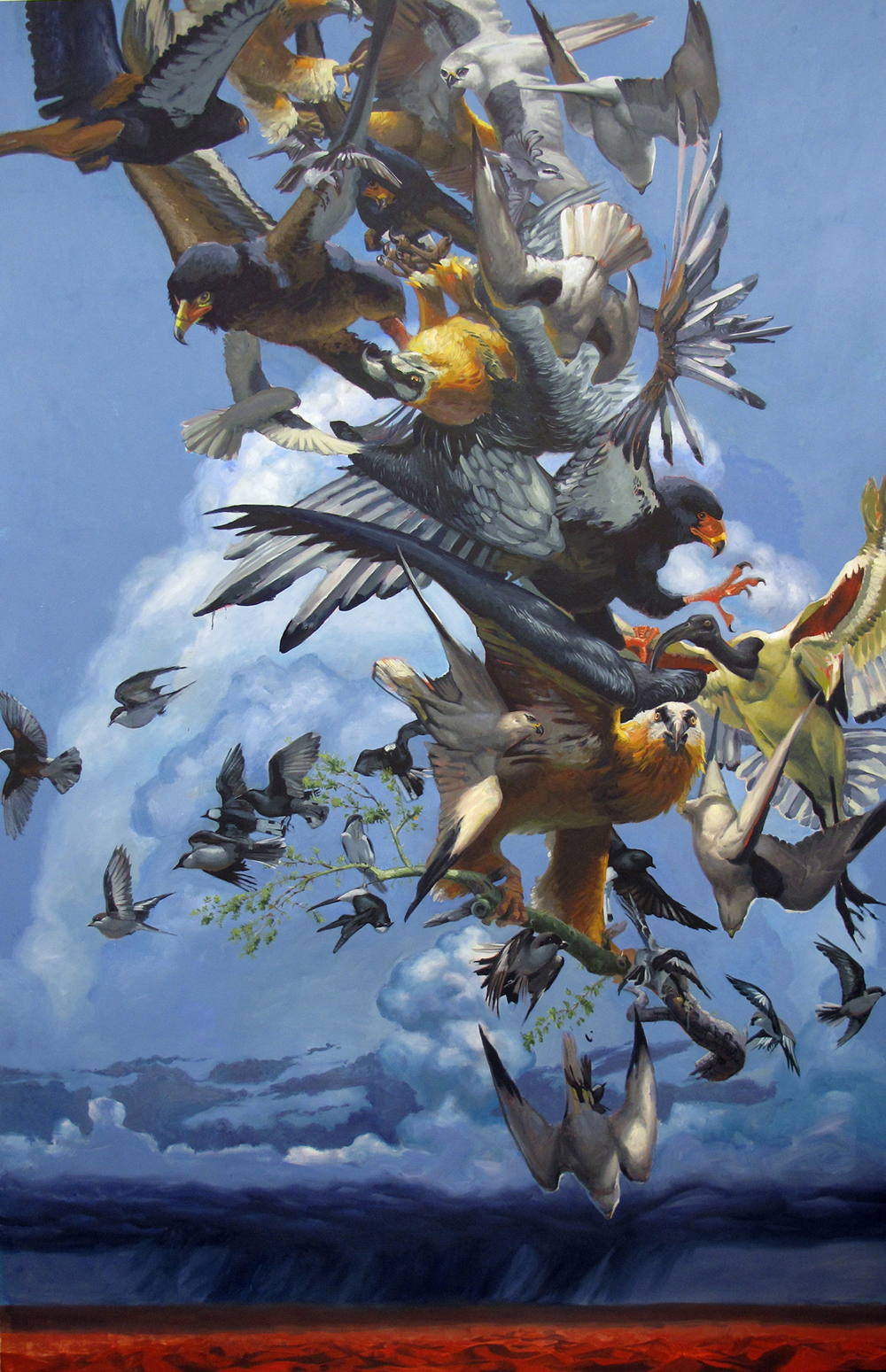 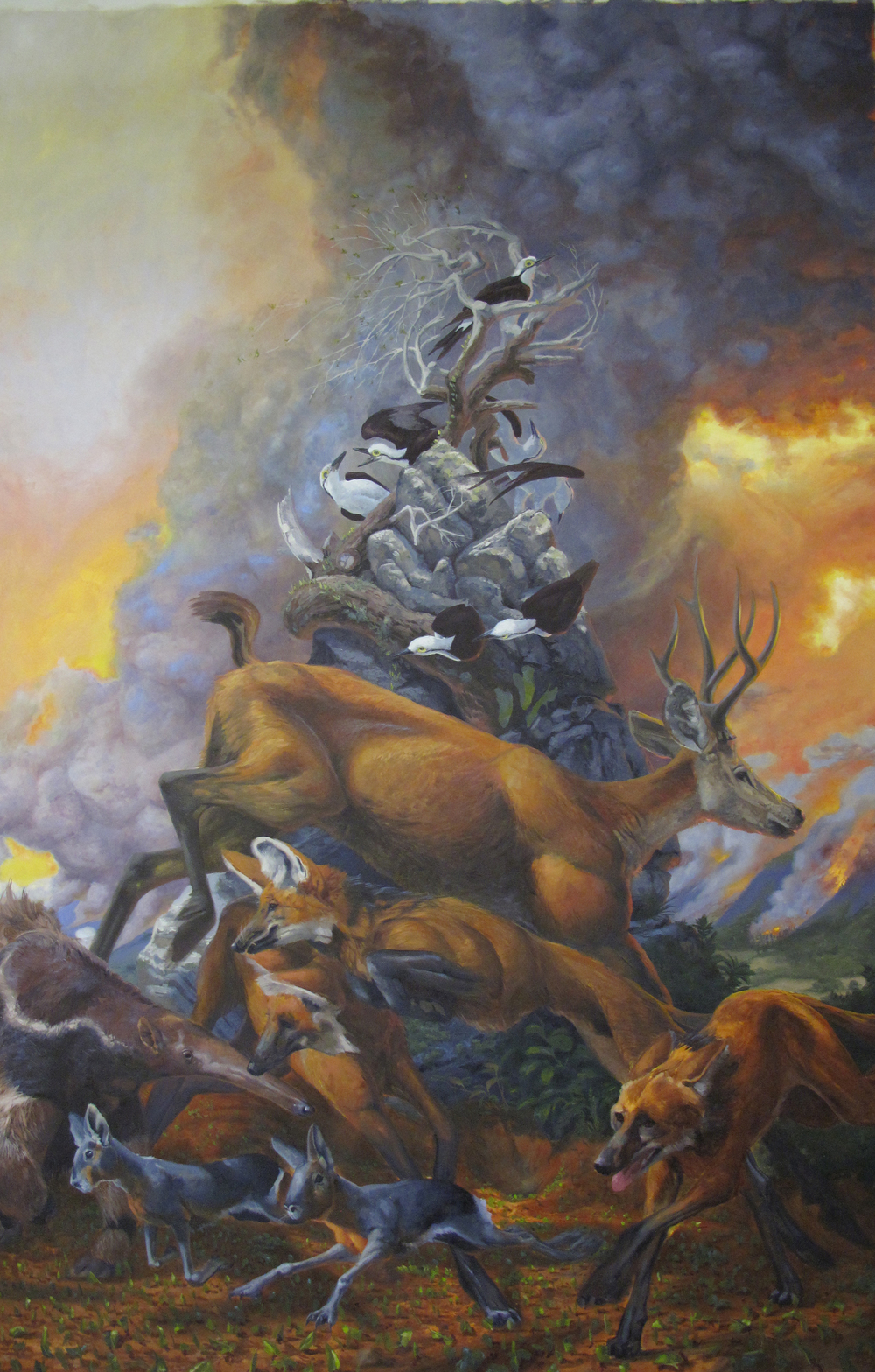 I am particularly inspired by the Flemish Baroque painters, specifically Peter Paul Rubens and Jacob Jordaens, who have a dramatic eye for composition, texture, and volume. Their work spills out of the canvas, and has a kind of celebratory drama and massive scale I can’t seem to pull away from. Rubens in particular takes such joy in the execution of animal life in his multi-figural compositions, and the way in which they are painted really reveals his love of the animal life he paints.

I found Richard Dawkins’ work inspiring, specifically when he had once described the pseudo-spiritual awe of the natural world as a “transcendent wonder.” I often think of this phrase when marveling at the duality of the complexity and simplicity of the natural world around us. Even the briefest and (in my case) most surface glimpses at the inner workings of immensely complex or awe-inspiring simple systems fill me with a kind of wonder and amazement, one that I find a comfort in knowing I am a part of. My hope is that my work can communicate some of that awe I feel when marveling at the natural world around us. 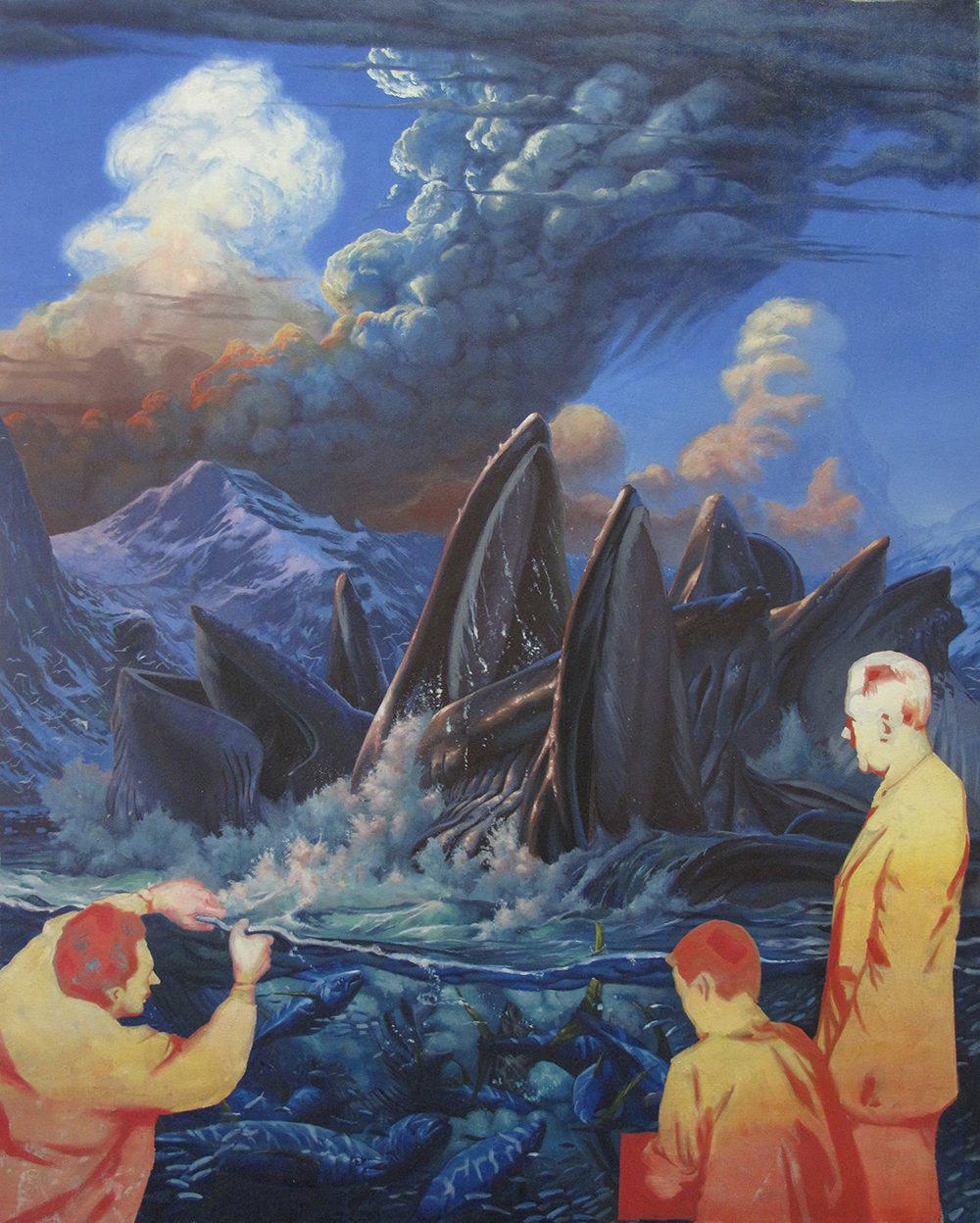 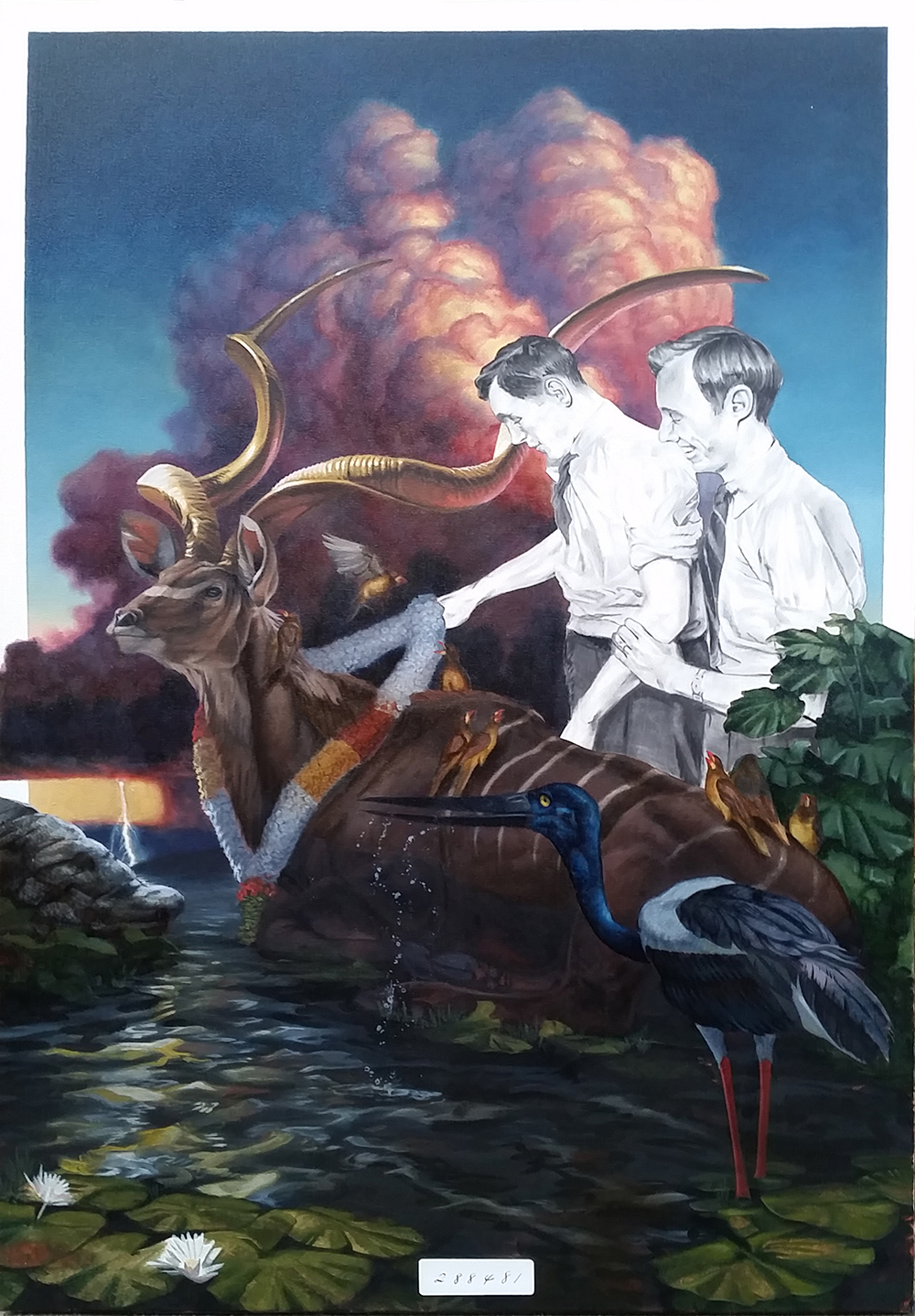 I was born in 1986 in San Diego California, graduating Magna Cum-Laude from San Francisco State University with a Bachelors degree in art in 2009 and later from the New York Academy of Art with a Masters degree in Painting in 2014. While there, I was awarded multiple scholarships, and was one of six students to be shortlisted for the Third Year Post-Graduate Fellowship. Since exhibiting my work in my first solo show, “K.R. Thompson: A New Mythos” at the Noel-Baza Gallery in San Diego, CA (2012), I have shown in numerous shows throughout New York City. In addition, I have participated in several artist residencies overseas and locally, including the Terra Foundation for American Art-Europe in Giverny, France, the Hudson River School Painting Residency at Clermont and Olana, NY, and the Bingham Cottage Artist-in-Residence at Hog Island Audubon Camp in Bremen, ME. Recently, I was the recipient of a generous grant from the Elizabeth Greenshields Foundation of the Arts. I continue to paint, work, and teach in the New York area, and live in Crown Heights, Brooklyn. 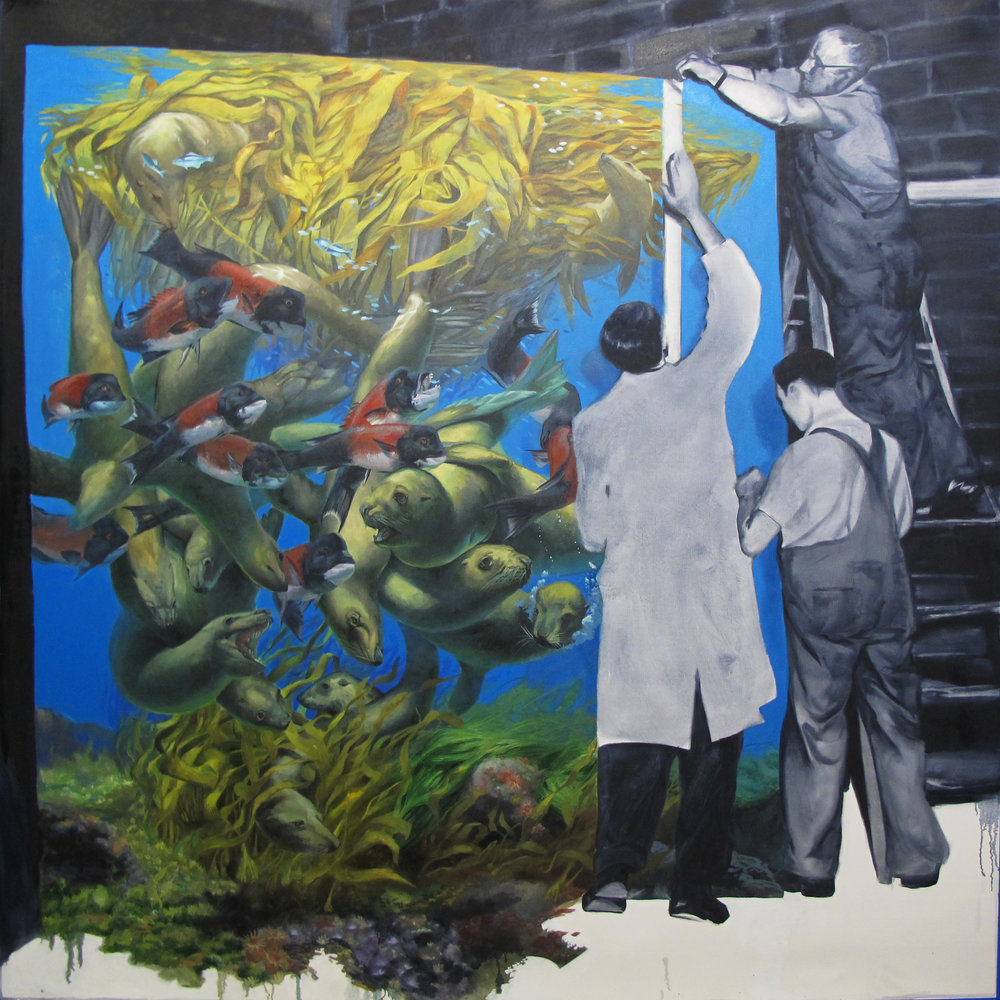 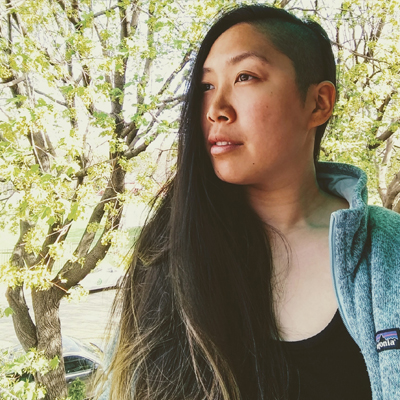