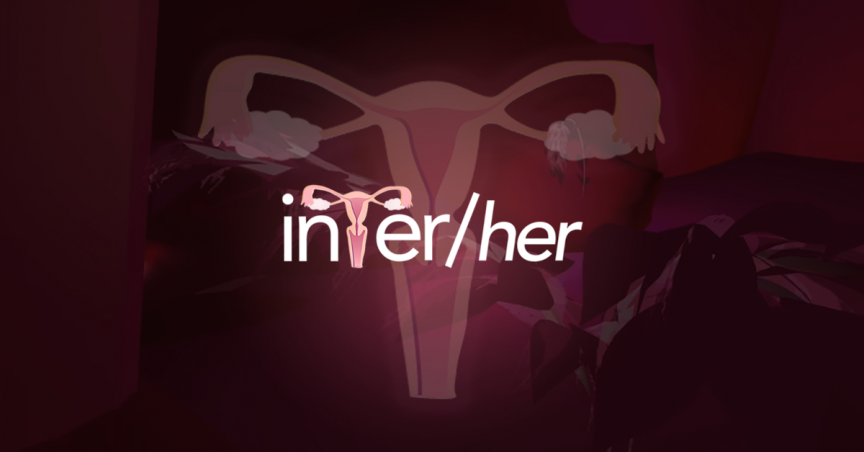 INTER/her breaks the silence on female reproductive disease and pain

It is an average Sunday in May, and a woman is crawling into a vagina. She wears a headset over her eyes and a corset around her abdomen. Once inside, she sits comfortably on a squashy beanbag chair and toggles a hand-held controller, peering around the space.

“Being inside the vagina was very interesting,” she says, upon emerging. “It was really soothing, really calming.”

This voyage deep inside the female anatomy is part of artist Camille Baker’s latest project, INTER/her: a completely immersive multimedia artwork that explores the perpetually overlooked and under-researched world of female reproductive disease and pain. It will debut to the public on June 22, 2021 at The Brewery Tap Gallery in Folkestone, England, before moving to other locations, including a modified online version.

In a private testing session, Baker invited patrons to don a virtual reality (VR) headset and a haptic, vibrating corset, and enter an inflated dome, its entrance evoking a vulva. “It’s a bit cheesy pink,” Baker tells me, smiling. “I kept saying we should make it more peachy, not so pink and blood-like, and it just didn’t quite work because we’re also trying to make it dark.” She wants the space to be dark, intimate, squishy—womb-like. “I went for one of these air tents…. It’s like a blow-up bed.”

Seated on the three beanbags inside the dome, the audience navigates through a 360° VR audio/visual journey. They hear a soundscape that includes women narrating their experiences with reproductive-related disease and pain, and they see bespoke imagery of disease overlaid with images celebrating womanhood, like goddesses and nature. In tandem with the stories, the corsets vibrate to mimic the symptoms being described.

I ask Baker if it hurts. She assures me it’s quite gentle, though she adds, “There’s a part of me that wants to make it less gentle, because what women go through is not gentle!”

Embedded in the corset is the same technology that makes your phone vibrate. The button-sized nodes are placed above the pubic bone, by the belly button, and by the hip bones. They connect wirelessly to Unity, the gaming engine that runs the VR software. INTER/her uses the Android-based Oculus Quest 2 headset and the accompanying hand controller units.

At the end of the session, audience members are invited to speak or write about their experiences and are offered leaflets for women’s health charities. Baker kindly shares with me footage of her tester audience’s reactions.

“It’s magical, it’s informative, it’s really surprising, all these different veils, and all these different graphic representations. Obviously, they’re not realistic, but they’re compelling,” said one patron. “The immersion is kind of poetic; it’s this soundscape, but it’s also this documentary element to it.”

A male patron described the experience as “enlightening,” saying, “It’s definitely topics I’m not used to thinking about…. I had no idea that women are going through all these diseases in their [later lives].”

The project is personal to Baker. In 2016, she was diagnosed with ovarian cancer (from which she has since recovered) when she had a cyst removed from her ovary. “Once they figured out it was cancerous, they’re like, okay, let’s remove everything,” Baker says. “And for me, I passed the age of having children, but it was kind of a sense of, why do you want to rip out everything inside me? I don’t get that. Is there another option?”

She dove into research, consulting with doctors, a reproductive oncologist, and a hormone specialist. And she could not find consistent answers to her questions. Though she emphasizes that hers was an experience with the UK health system specifically, she notes the lack of detailed information available in general to those with uteruses.

“I felt that there wasn’t enough specific information about my particular situation.” Baker’s case was unusual, as most women are older than she when they develop ovarian cancer. “I felt like I had to know what to ask…and I didn’t know what to ask. And they wouldn’t tell me things unless I asked!”

When Baker consulted with a UK charity, Target Ovarian Cancer, the nurses told her that one of the reasons ovarian cancer is so aggressive and widespread is that the symptoms are “really weird.” They can include bloating, gas, and feeling like you have to dash to the bathroom to pee all the time. “They said that [women in the UK] are often too embarrassed to tell the receptionist what’s wrong with them, so they don’t book appointments,” Baker explains.

Baker decided to have two surgeries, removing her ovaries, lymph nodes, and appendix, and started hormone therapy. She tells me that after her second surgery, while she was recovering in the hospital, she chatted with a woman who was in for a fibroid (an abnormal growth in the uterus). Baker was alarmed to hear that the woman was having a full hysterectomy and had not asked any questions before agreeing to the operation; she said she was just doing what her doctor told her.

“I guess it’s partly that there’s never been a priority to care about these things. And the focus has always been on childbirth,” Baker says. “That’s the only thing that matters; you’ve finished with that stuff, so let’s yank it out.”

In a more extreme example, Baker recounts overhearing her grandmother talk about going into surgery for appendicitis and coming out with a surprise hysterectomy. Baker phrases it as, “Oh, by the way, while we were in there, we just took everything else out.”

Sometimes the issue is pain being dismissed. Baker’s cousin in Ontario, Canada had 11 endometriosis surgeries over 15 years, throughout which she was in huge amounts of pain. “And they kept telling her it’s in her head,” Baker says. Her cousin finally went to see a specialist in the United States, who discovered the endometriosis was wrapping around her intestines.

While women are very good at grinning and bearing it, and are often encouraged to do so, struggles with reproductive ailments are common. At the start of the project, Baker reached out on Facebook to see if women would share their experiences. “Loads of women had things to say. Loads of women got in touch with me,” Baker says.

Though she does not mean to give medical advice herself, Baker wants women to feel comfortable asking for it, discussing openly what is going on inside them, and having those discussions be taken seriously. “The whole point of this is so that if women are having something going on with their bodies, to go and get it checked out, and to share their stories with other women,” she explains.

After Baker had her conversation with the woman in the hospital, she overheard the woman asking her doctor some additional questions. “I was like, yes! Like, victory, she’s asked some questions!” Baker laughs. “And that’s the whole thing that I want from this, that women just start asking questions and researching their bodies and not suffering in silence.”

Please visit the INTER/her website for more information as well as event locations and dates. You can find out more about Camille Baker on her website. If you would like INTER/her to come to your city, she encourages you to get in touch.