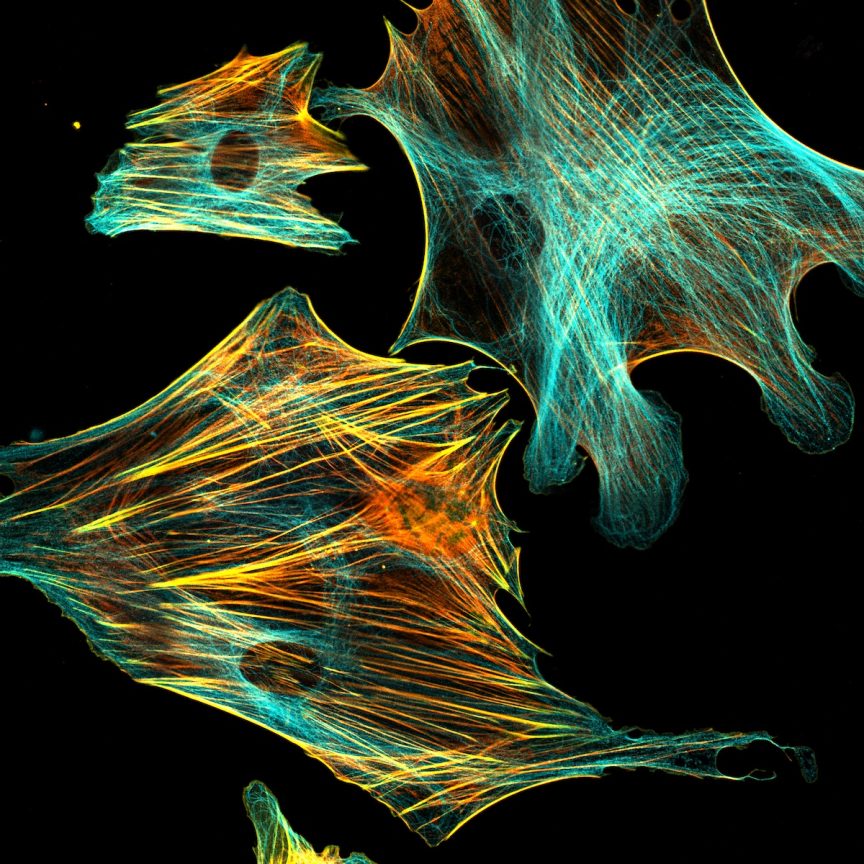 There’s a certain cell in the testes that looks like a black hole in outer space. I’ll give you time to read that again.

The Sertoli cell in the testes, when illuminated under a microscope, does indeed resemble the Event Horizon Telescope’s internet-breaking black hole photo. You’ll find this and other light-up delights on @Immunofluorescence, an Instagram account with over 25 thousand followers that displays spectacular images captured using a microscope.

It’s run by Derek Sung, an MD/PhD candidate at the University of Pennsylvania’s Perelman School of Medicine. As part of his research, Sung uses a light microscope to study tissue at a cellular level. With the technique of immunofluorescence (more on that later), he illuminates the cells he wants to study, which happen to make for stunning photos.

When Sung and I speak, he’s just found a quiet spot at work. I’ve caught him during a busy day—Sung researches vascular development and attends to patients, as part of his program. He tells me he started @Immunofluorescence in 2017 as a shortcut to hold people’s interest when he talks about what he does all day.

“You know, at first, I would say things like, ‘Oh yeah, I study angiogenesis,’ which…for most people in science, they know that’s the growth of blood vessels,” Sung tells me. “But if you’re literally any other normal person, you wouldn’t know what that means at all!” He discovered that showing people a captivating photo was a better catalyst for understanding. “It really piques their interest,” Sung says. “Otherwise, if you just kind of talk to them, their eyes glaze over, and they kind of nod at the end.”

With its luminous colours and mesmerizing patterns, the account has the effect of a porch light on a moth—it draws you right in. Sung has included in the photos’ captions succinct and playful explanations of what you’re seeing (I’m particularly fascinated by a photo of what looks like ghostly underwater caves but is, in fact, a mouse’s colon).

So what is immunofluorescence and how does it work? Our immune system makes antibodies, proteins that hunt down things that shouldn’t be in our bodies, like bacteria, viruses, and parasites. Once they find their target, antibodies bind to it and try to destroy it. And scientists can create antibodies with one specific mission—target a particular kind of protein.

To keep track of their special antibodies’ mission status, scientists attach to them “tags” called fluorophores. Fluorophores are molecules that emit a specific colour when excited with a laser or other light source. Put a cell full of special antibodies under a microscope with a light source and ta-da immunofluorescence! Scientists can light up different parts of a cell in different colours, which allows them to identify those parts and figure out what’s going on in there.

Sung explains that immunofluorescence is a “bread and butter” technique of molecular biology that he learned during his undergraduate degree at Cornell University. But only when he started doing multiple targets for one tissue section, which resulted in different colours under the microscope, did the beauty of the images strike him. “Even in the failed experiments, I was like, this still looks pretty, you know, this looks cool!” he says.

Although there’s plenty of room for things to go wrong in such a multi-step process, Sung tells me it’s pretty efficient. “If I’m working with a piece of tissue, and…if I start the immunofluorescence on Monday, I can have an image by the end of Tuesday.” He’ll make some brightness, contrast, and colour adjustments to the image, and then it’s ready to post. He won’t ever set up an image for the sole purpose of Instagram; it’s always the result of pursuing an answer to a biological question.

I ask Sung if he has a favourite tissue to image. He tells me that he’s a fan of the heart, the cytoskeleton, and, though he knows it’s “kind of gross,” the testes (which is, of course, how he got his incredible “black hole” photo, and I got my introduction for this article).

Though he’s been inducted into the sciart community as a microscopy artist, Sung tells me he’s still hesitant to accept the label. “As I was doing social media and doing the Instagram thing, people would DM me…and be like, ‘Oh, so as a scientist and an artist,’ and I’m like, whoa, wait, ‘an artist,’ are you sure? But it kind of feels like over time that community has kind of claimed me, which I’m happy to be a part of, but it’s just never something I would have really ascribed to myself.”

But Sung has certainly made a mark on the community. He’s just been distinguished with an Image of Distinction in the acclaimed Nikon Small World Photomicrography Competition, was an Honourable Mention of the Olympus Image of the Year Award in 2020, and had not one but two Cell Picture Shows dedicated to his work in Cell Press.

For Sung, it’s about more than impressive photos and entertaining an audience. He wants to make science accessible and encourage us to understand and engage with processes that happen around and inside us all the time. Once we’re drawn in by the eye-grabbing explosions of colour, he hopes we’ll stay for the biology. “‘This is something that’s literally happening inside of my body probably right now…. I didn’t know that’s how our bodies worked,’” Sung says, voicing what he hopes a viewer may think upon spending some time on the page. “They’re discovering things basically about themselves.”

When I tell Sung that I found @Immunofluorescence cool, clear, and educational, he puts his hands over his heart and smiles widely. “I’m so happy you said that! Because that’s totally been my goal. And demystifying, I think, a lot of things surrounding science. I really think it’s something everyone would find interesting, and it’s something everyone should kind of understand.”

He says he would like visitors to come away with an appreciation of the inherent beauty in nature, and with an understanding that science is not a sterile field without room for creativity. “That’s really not the case,” Sung explains. “Science is really in flux.” The COVID-19 pandemic’s glaring display of how much distrust there is in science, even science with heaps of evidence, affected Sung deeply. “I think a lot of that comes down to how we present science and how we’re able to communicate it, right?” Sung continues. “I don’t want anyone ever to feel like they should be ashamed of asking a question or embarrassed to ask a question. This is the whole point of, essentially, my account!”

Check out @Immunofluorscence here. Derek Sung also co-hosts a podcast, Beyond the Abstract, where he continues to make science fun and accessible.

*
All images and explanations in image captions courtesy of Derek Sung.