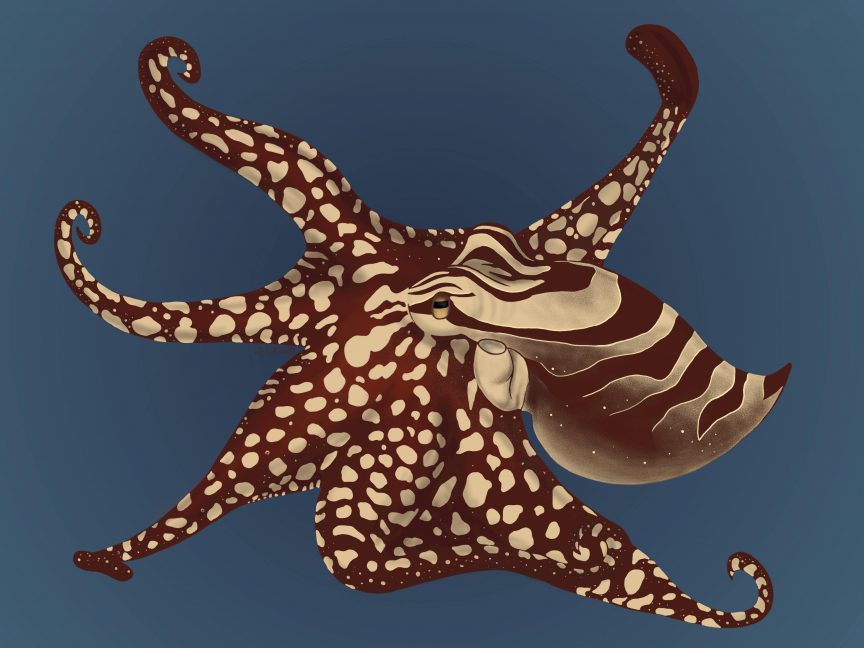 I think my interest in both science and art started at the same time, and they have influenced one another all along the way. Nature and art have both been such big parts of my life since I was little, but I suppose I focused formally on art first while in high school. Somewhere along the line I realized how interested I was in biology because it was the subject of all my paintings. This led me to a major in biology as an undergrad, where I discovered both my interest in evolutionary questions and SciArt. Since then, I’ve embraced the integration of science and art in my career.

“Somewhere along the line I realized how interested I was in biology because it was the subject of all my paintings.”

My art usually mirrors what I study, so marine biology, ecology, and evolution relate the most to my work. Some pieces have been based on my research projects, some inspired by papers I’ve read, and others showcase the immense biodiversity in some groups, especially cephalopods. However, I’ve been focusing on bettering my technique lately and plan to start creating pieces that relate more directly to evolutionary principles soon.

I bounce back and forth between digital painting and traditional media. Lately I’ve focused on watercolour with pen and ink, but have also worked in coloured pencil, acrylic, gouache, charcoal, and graphite. Digital painting still feels new to me, but I have been learning a lot with my tablet.

This changes constantly as it’s almost always my most recent piece. This tends to be the one that showcases how I’ve progressed in my art or uses a technique new to me that I am still excited about. Besides that, I am consistently proud of one of my digital paintings, The Ceph Gang, since it’s bright, detailed, and I’m usually inspired to draw something else after studying it.

There have been a whole slew of people that have inspired and influenced me as an artist. Several family members, including my mom and grandmother, are artists, so they were my first teachers. I have no doubt they had some influence on the techniques I have learned and the mediums I have become comfortable with.

Other scientists and artists—both science-focused and not—have also had an impact on how I think about my subjects and continue to inspire me when I see their work. Ernst Haeckel’s plates are some of my favourite pieces to study for their whimsical nature and intense level of detail. Then there are several artists I follow who all have different styles, but all remind me of some other element I am working toward including in my art. Bianca Roman-Stumpff’s work does a great job of showing wispy smoke, light, and highlights in an expressive manner; science artists such as Christine Liu, Rene Martin, Franz Anthony, and René Campbell constantly show me new ways science and art can me integrated; and if I need a break from reality, I look toward artists like Vincent van Gogh and Salvador Dalí.