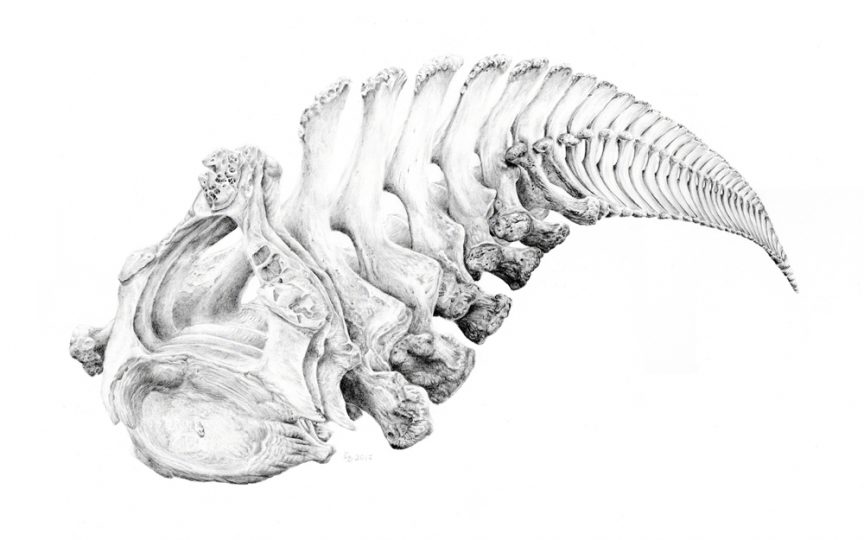 I guess that depends on how you define “science.” I have loved doing art as long as I can remember, and I have always been fascinated by the natural world. Early on though, that fascination was mainly at a visceral level. I enjoyed learning and figuring things out, but probably more than that, I was drawn to the smell of forests, the sound of rustling leaves or moving water, the touch of sand on bare skin—and I have always adored animals. Learning to look at natural phenomena through what might be called a scientific lens definitely took longer.

“I was drawn to the smell of forests, the sound of rustling leaves or moving water, the touch of sand on bare skin…”

In the end, I studied biology all the way to PhD, and one of the things I had to come to terms with in the course of that journey is that scientific understanding, although immensely satisfying on an intellectual level, is quite a different thing from that emotional experience that had drawn me to study biology in the first place. Other than lab sketches and lecture notes, scientific study also left little time for art, so there was a long hiatus in my practice.

These days, I find that the dual ways I engage with the world—the analytical and the intuitive—make for an interesting tension in my art, and that tension is a key factor in how my practice has developed (and continues to develop) over time.

Biology, first and foremost. Biology is the science I initially chose to study, and it will never cease to inspire me. Ultimately, however, the boundaries between disciplines are not that rigid. For my PhD, I studied the long-term development of boreal peatlands, which meant exposure to broader aspects of environmental science: hydrology, carbon cycling, paleoenvironmental reconstruction, and climate change science. While I find these subjects less directly tangible than biology (and certainly harder to draw!), all of them may influence my work conceptually.

I am also fascinated by evolution, and I am intrigued by those points where evolutionary biology overlaps with other sciences. Astronomy, planetary science, geology, deep time, speculative biology—all these may well provide inspiration for future works.

It varies. My main form of expression to date has been drawing, and a year ago, I would have told you that the materials I use are quite old-fashioned: paper, pencils (graphite and colour), and ink, with the occasional digital piece for variety. But after developing a coherent body of work for a solo show in early 2019, I really felt I needed some time to experiment. So between then and now, I have tried all sorts of things. First, I ventured into 3D, which involved using paper, driftwood, old textiles, photographs, and even an old room divider. I loved the creative process involved, so this is definitely something I plan to develop further. I have also tried to push the boundaries of my drawing. For my my most recent piece I used acrylic ink on wood panel, which made for an interesting cross between drawing and painting. Working on panel also makes it easy to work large-format, which I love. So in the short term, that is what I plan to do more of.

To borrow the answer a friend once give to this question: Usually the one I am currently working on.

The show I am most proud of was definitely Orca Dreams this past January. Trying to pick a single 2D piece, I am hard-pressed to decide between the large triptych of the same title and Leaking Time, my most recent work. Overall though, for single artworks, I probably have to say Precipice. It’s a 3D piece, so putting it together meant exploring new techniques, and it turned out one of those cases where materials, concept, and message all came together beautifully in the final product. It is also the first piece I ever did that draws on both my scientific and my legal training, which makes it a personal milestone in deciding where I am headed next thematically.

That’s a surprisingly tough one!

In my teenage years, a definite inspiration was Rien Poortvliet. I own several of his books, all of them gifts from my parents. I am not fully sure which came first, but it was probably the one on horses—and once I had that, I promptly asked for more. Poortvliet’s style and subject matter are far removed from the art I do today, but those books were a large part of what made me want to learn realistic drawing.

Other artists I discovered early on whose work I continue to admire are Horst Janssen, MC Escher, and HR Giger. Of those three, Escher probably comes closest to having directly inspired my practice, while Giger resonates with a part of me that I wold love to explore more deeply in the future–if I ever find the courage to do so.

Ernst Haeckel is a far more recent discovery, and his work on radiolaria was part of the inspiration for Orca Dreams. I love to play with scale and to showcase the microscopic, so the work of Haeckel and other illustrators/biologists working in that area fascinates me.

Artists are often thought of as doing one specific thing, or of having ‘a’ particular style. If this is the case then I am not really sure I am there yet. I mostly stopped doing art when I started my scientific training, and when I first picked up those pencils again two decades later, I drew still lifes of objects. Next, I tried my hand at biological subject matter, and much of my work straddled the line between traditional fine art and what might be called biological illustration. Spending time on these drawings honed my craft, and my art began to move beyond the strictly representational. Surreal elements first appeared a few years ago, and I am now starting to move into 3D and more concept-driven work.

“Art is not static, and my voice as an artist continues to change.”

Having spent some time experimenting, I have just reached a point where I can map out my next big project, but beyond that, I am not really sure I want to lock myself down. Art is not static, and my voice as an artist continues to change, so watch this spot for future surprises!

Find out more about Ilka Bauer on her website.