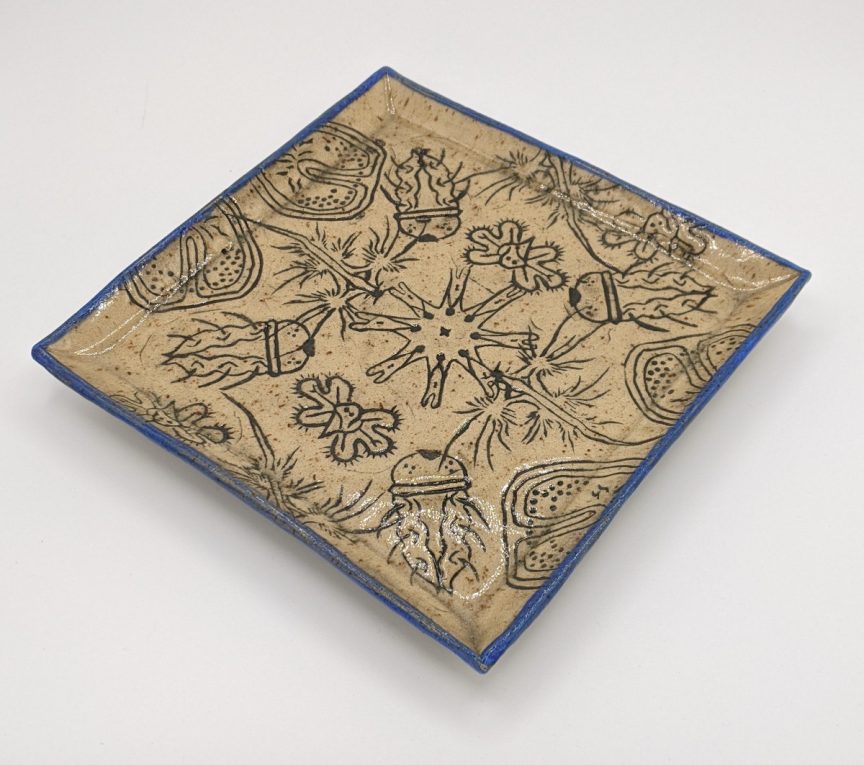 Art came first because my mom is an artist and arts teacher. But as soon as I was exposed to science in primary school, I fell in love. Making experiments made me so excited, and these experiments weren’t even anything sophisticated: similar to making a battery from potatoes, or baking powder and vinegar volcano experiments.

My mom loves telling the story that one day, while in primary school, I asked her whether I could become a tailor and a scientist when I grew up, to which she replied, “Of course honey!”. I think of this as one of the defining moments in my life because I was so lucky to have a mother who believed I could be whatever I wanted to be. I got no discouraging, gender-stereotyped messages from her.

When I was in high school, I picked up a popular science book that explained the everyday science of things: for example, why apples go brown when exposed to air. I ended up memorizing some of these explanations and would go around explaining them to people whenever I got the chance. Sometimes I was accused of ruining “the magic,” for example, when I explained to my family one night at the beach that shooting stars aren’t actually stars but just space rocks burning in the Earth’s atmosphere. They were all making wishes with each shooting star and didn’t want the illusion to be dispelled. But even if they appeared to protest, they actually loved me being the family’s “nerd.” I also think it helped that “nerds” in Turkey (where I am originally from) are respected and not bullied at school. I was pretty proud of myself as a teenager.

While being the science kid, however, I always had some arts or crafts I would pick up as a hobby, or I would be my mom’s guinea pig for a new arts lesson she’d be developing for her students. Women in my family are always busy with some crafts: sewing, embroidery, knitting, painting, music, dance…My grandmother will judge the hell out of you if you just sit and watch TV and “let your hands be lazy.” You can surely get some crochet work done! So, science and arts co-existed in my life. But it was not until relatively recently (in 2013) that I thought of combining these two passions of mine.

My work relates mostly to cell and developmental biology, and invertebrate zoology. In my artwork, I use the beauty we encounter in scientific research to celebrate life, cultivate curiosity, and incite appetite for discovery. The seeds of each drawing or art piece often come from an encounter with an astonishing life form, organ, structure, pattern, or cell. I dig deeper into the science by reading scientific papers on the subject and examining visual elements more closely before I finally create the art piece. I also like to glean inspiration from traditional art styles (such as Turkish ceramic paintings, Buddhist mandalas), natural history museums, and scientific illustrations (especially Ernst Haeckel’s drawings, old biology manuscripts, and Victorian Era diatom arrangements).

“In my artwork, I use the beauty we encounter in scientific research to celebrate life, cultivate curiosity, and incite appetite for discovery.”

Recently, I have been focusing on making pottery forms of organisms that are typically considered scary, yucky, disgusting, etc. Segmented worms, insects, spiders, slugs….It is very important to me to invite people to leave their preconceived notions about these animals aside and open their minds to the beauty and wonders of them. We see only a handful of animals (usually vertebrates) celebrated in popular culture when there are literally millions of amazing species out there. I think if more people knew the vast diversity of life out there and saw the beauty in these beasts, there would be more concern around losing them to extinction.

“I think if more people knew the vast diversity of life out there and saw the beauty in these beasts, there would be more concern around losing them to extinction.”

The other dimension of bringing these “creepy-crawlies” to light and inviting people to appreciate them is based on my experience as a minoritized person living in the US and when I lived in Europe. I see worms and bugs as “the others” of the animal kingdom, compared to animals that are so familiar and easy to love (like dolphins, or octopuses). This is one of the reasons why I designed my most recent work as dishes to hold food. Can you get yourself to eat food from a worm-shaped or a spider-shaped dish?

Nowadays I mostly make pottery. I started making ceramics art after moving to Cape Cod in 2017. I feel like I finally found the medium I have been looking for. My hope is to take this art form to a different level by making installations and interactive works in the future. Other materials I used in the past are drawing paper and sharpie pens as well as digital software for my drawings, fabric and thread for embroidery, and polymer clay for smaller scale sculpting.

I am most proud of my insect/worm ceramics series. Some of these pieces have been locally exhibited at the Meeting House Clay Center, of which I am a member and where I make pottery. As I mentioned above, I love that these pieces are not merely sculptures, but they have a dish/box component. I have been enjoying making functional artwork, and these pieces are perfect for the interactive installation project I am planning to do.

Ah so many amazing people out there, and this could be a very long list if I tried to be all-inclusive. Like any biologist, I have been absolutely charmed by the German zoologist Ernst Haeckel’s illustrations. He is one of the earliest Scientist-Artists. When I visited the Harvard Museum of Natural History and saw Leopold and Rudolf Blaschka’s glass flowers, I was blown away! Some contemporary scientist-artists who inspire me are Steph Nowotarski and Bob Goldstein. Bob does screen printing. He and I collaborated on a poster project for a seminar series that was great fun. It is encouraging for me to see full-time scientists like Steph and Bob make such great art inspired by science.

Meanwhile, my work could not exist without people who go out and document these amazing creatures. My husband, Ryan Null, is the person who taught me so much about insects and other arthropods. It is amazing to have somebody so knowledgeable around you. He is able to find all kinds of insects just in our backyard and photograph them, and sometimes I help him with his photography. We took the candy-striped leafhopper photo together and later I made the ceramics piece inspired by it.

I also follow quite a few macro and wildlife photographers’ works such as Markus Kam and Alexander Semenov (who is also a scientist).

Finally, I am a huge fan of contemporary art and related museums. When I lived in Paris, I visited Palais de Tokyo often and was introduced to Marguerite Humeau’s work there for the first time. The exhibition at the time included her work called FOXP2, which is a gene associated with language ability in vertebrates. Another contemporary art museum experience that I cannot forget is Mark Dion’s “Misadventures of a 21st-Century Naturalist” exhibition at ICA in Boston, which left me absolutely speechless. I would love to be able to make artwork at the scale Mark Dion works at one day.

A few other artists including pottery, glass, and embroidery artists I want to mention are Sarah Caruso, Lisa Stevens, Luke Jerram, and Meredith Woolnough. All these artists make beautiful, meticulous work inspired by nature.

SciArt, to me, is a very wide spectrum of works from science to art. It is all about how we look at a visual and in what context we think about it. A lot of scientific imagery, especially microscopic images can easily be considered abstract art if we saw them at an art gallery. So, if we were not given the context, it would be very hard to tell whether that visual work is made by a digital illustrator or a scientist who is an expert microscopist. I find this very exciting. Similarly, we see works of artists using science and technology as their media. It is wonderful to see full-time scientists, full-time artists, and everybody in between creating SciArt. I prefer a broad definition for SciArt that is as inclusive as possible: a work of science that is visually intriguing, or a work of art that has inspiration from science, or everything in between. If somebody thinks it is SciArt, then it is SciArt.