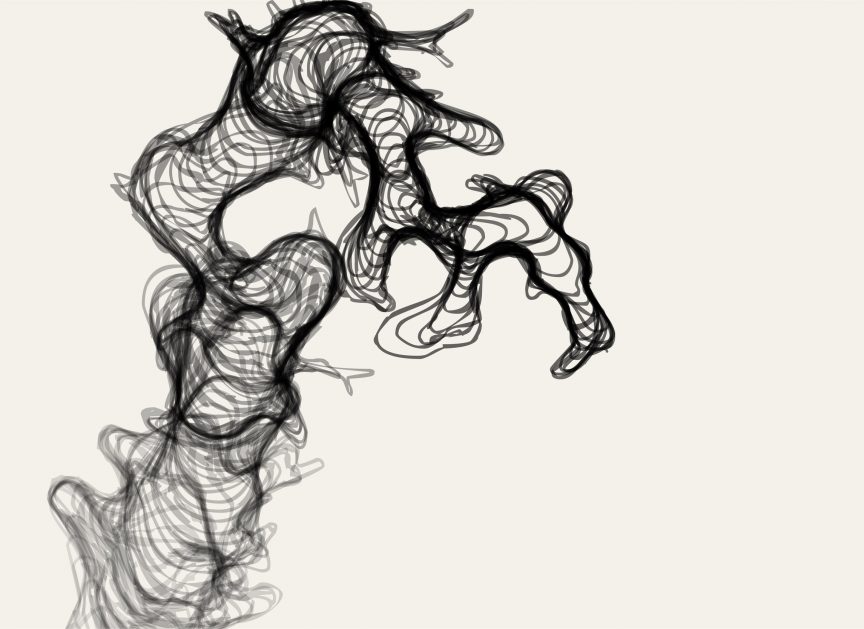 When I was young I loved to draw and paint, so I guess the art came first. I did, however, always have an interest in nature and animals, which came out in my paintings. I’m now volunteering for the Royal Society for the Protection of Birds to go into primary schools to pass on this passion for nature and animals that I had as a kid.

At some point I started to get really fascinated by cell biology and decided to study that at university, while keeping active on the art front as well. The passion for biology turned into neuroscience. The brain is the most complex thing we know of in the universe and figuring out how it works, although we’ll never fully grasp it, reveals so much beauty. I ended up doing a PhD in neuroscience and I’m still a neuroscientist now. Along the way I’ve tried to keep making art as well. For example, during my time at university I took part in a collaborative Master’s program between the University of Amsterdam and the Rietveld School of Art & Design. However, for long periods I produced little due to the demands of a scientific career. Over the last few years, however, I have been able to find more of a balance and have started to make paintings, drawings, digital designs, and algorithm-based works, making use of the experience I have in various field within neuroscience as well as bringing in concepts from other fields of science.

“The brain is the most complex thing we know of in the universe and figuring out how it works, although we’ll never fully grasp it, reveals so much beauty.”

I have now developed a website to showcase my work and also hopefully educate people about the structures and processes within the brain. With this website I hope to not only reach other scientists, but also people who are interested in science but may not necessarily have a background in it. I realized that through art I can enthuse people about science concepts and help to educate them through images. To facilitate this I provide explanations for every work on the site to reveal the science behind them and/or show how the images were made. My aim was to make this reachable for a general audience, letting them explore the website to find something that triggers their interest and provide them with some extra knowledge or insights.

My artworks are inspired by different fields of science but most often by neuroscience, and in particular perception and the visual system. My PhD was dedicated to figuring out the communication mechanisms between two types of cells in the retina, the light sensitive layers of nerve cells in the back of your eye. The two cell types I focused on were the photoreceptors that detect the light and horizontal cells. After my PhD I worked in various other field within neuroscience (including on Parkinson’s disease, in vivo neural activity, and memory), but sensory systems remained a major fascination of mine.

I make use of different media and like to combine them as well. For painting and drawing I use predominantly acrylic paint and ink, and I use those media in my digital designs as well. For one of my postdoctoral positions I’ve had to teach myself coding for data analysis. I realized I could use this newly acquired skill for art as well, so I have also recently started to write code that emulates the processes used in our sensory system. Furthermore I’ve taken up photography to use for paintings and designs as well as input for some of the algorithms I have written. I’m also using it more and more as a medium in its own right.

For a long time I’ve wondered about how to combine my art and my science in a way that is both interesting for scientists and the broader audience. I started to realize the power of art to engage people by making illustrations to explain the mechanisms I was working on, and by making figures for others—like a friend doing a PhD in theoretical physics. It was towards the end of my PhD that I made an illustration that really captured both audiences. I was working on a big project that resulted in a really nice publication. To illustrate the findings of the paper I designed an image that was used in a synopsis article that our paper was selected for and it was also selected by the editors as the cover-image of the issue that the article appeared in. I noticed that even people who didn’t know much about the science behind the image really liked it; explaining what it depicted became a great conversation starter for me. Recently, I’ve been approached and asked to design cover art for articles and conference booklets.

As a neuroscientist I was of course familiar with the beautiful drawings of Santiago Ramón y Cajal and I think his influence is visible in my work. However, I think that there are many influences that are harder to place but have nonetheless been important, like Anselm Kiefer, whose themes are obviously much different but whose rough painting style I have always loved. Being Dutch, I’ve grown up with imagery from “De Stijl”, an art movement that includes Piet Mondriaan. I’ve recently noticed its influence in my work—perhaps because I’ve been living outside of the Netherlands for almost 5 years now and it’s become my way of keeping hold of some Dutch roots.

People in science who have inspired me in the past include Rosalind Franklin and Charles Darwin. When I first became interested in cell biology, I started reading about DNA. I was fascinated by Franklin’s role in its discovery as well as her experiences and difficulties as a female scientist, some of which I recognize in my own experiences too, unfortunately. The journey Darwin took to come to the realization of evolution is amazing—collecting so many pieces of the puzzle and then carefully letting them all fall in place before coming out with his findings. And the mechanism of evolution has been such an important discovery as well, as it forms the backbone of all of biology.

I think the collaboration between scientists and artists can be an important part in this, stimulating creative new ideas in science as well as helping to communicate the wonders of our planet and universe to the general public.

Now I get most inspired by findings and works I read about in peer-reviewed journals more than by individuals; science is a collaborative effort, after all. It is becoming less about “heroes” and more about what we can achieve together. I think the collaboration between scientists and artists can be an important part in this, stimulating creative new ideas in science as well as helping to communicate the wonders of our planet and universe to the general public. Just recently, for example, I read an article that I first spotted in BioArxiv, an open access preprint archive. The authors put a lot of effort into sub-classifying so-called cortical pyramidal neurons. It really inspired me to bring their findings to a broader audience and the artwork below was based on this work. The colours, shapes, and positions of the boxes help to bring out the differences between the cell types that had often been assumed to be the same based on their general appearance.