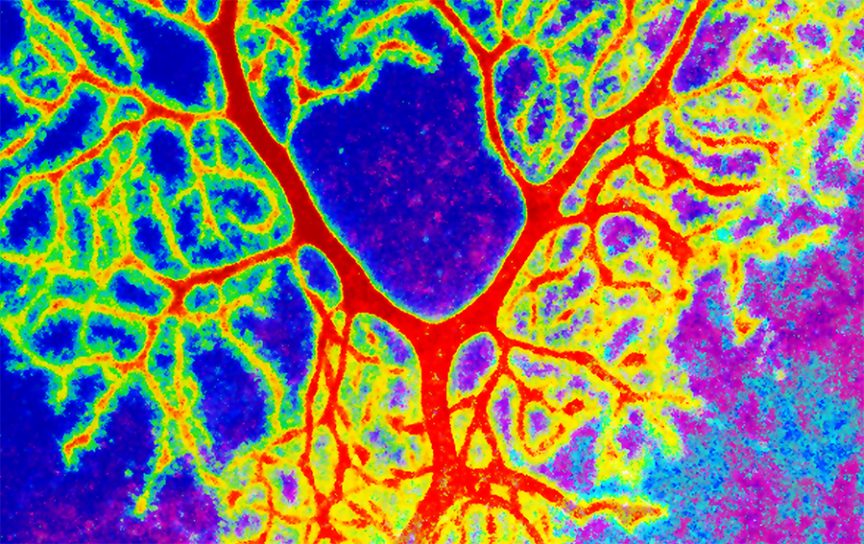 I grew up in a very art-inclined family.  Between all of us, we covered ballet, opera, several instruments, jewelry design, and other visual arts.  I was wearing a sparkly pink tutu long before I knew the word “science.”  As I grew older, I became fascinated with how the human body learns and perfects complex new movements in ballet, among other sports.  I continuously marvel at the human brain’s ability to control and plan movements. For example, if you are on stage in ballet, you must plan your movements in time with the music, coordinate your limbs, be aware of other dancers, know where the floor is when you jump, and remember sequences of movement.  The amazing human brain controls all of these processes.  In an effort to learn more about how our brain controls our movements, I studied biology in college at Boston University, and then entered a Ph.D. program in neurobiology at The University of Chicago.  Now, I study the cerebellum, which is a structure at the back of the brain responsible for balance, posture, and learning new movements. 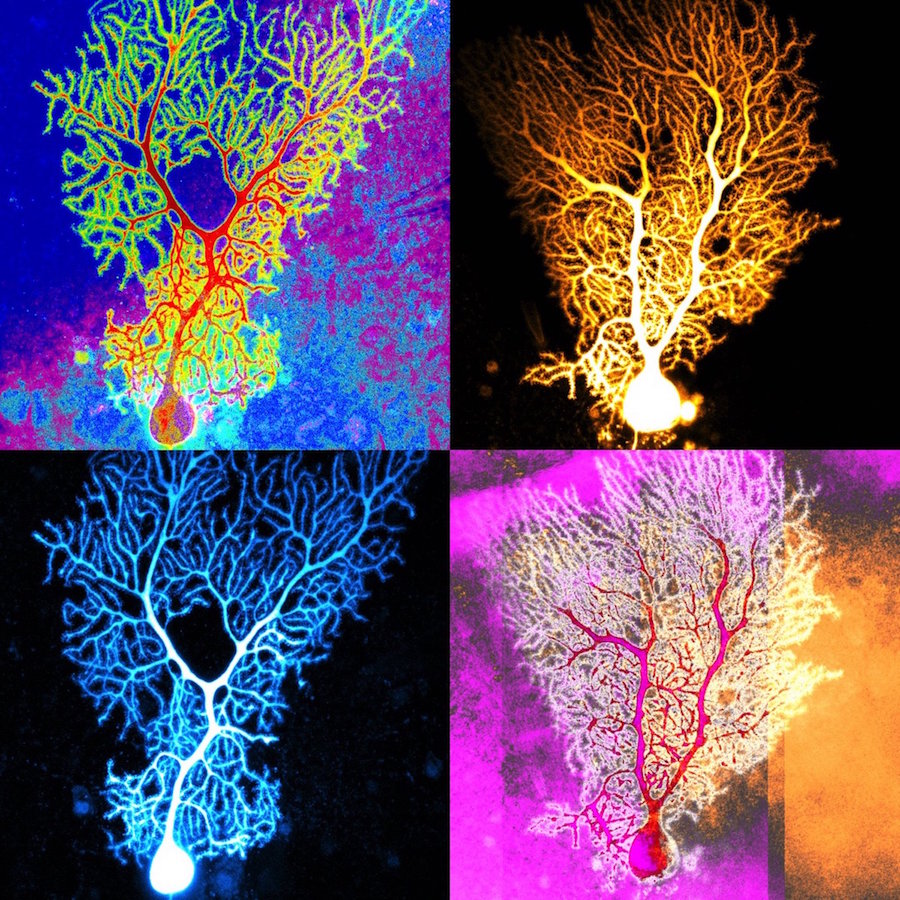 My art is based on neuroscience.  In my digital prints, I feature real neurons from actual lab experiments.  My favourite part about showing real neurons is that they are not something most people get to see everyday. My goal is to use these images to inspire people to wonder about neurons and brains.  I aim to promote curiosity, questioning, and discussion. 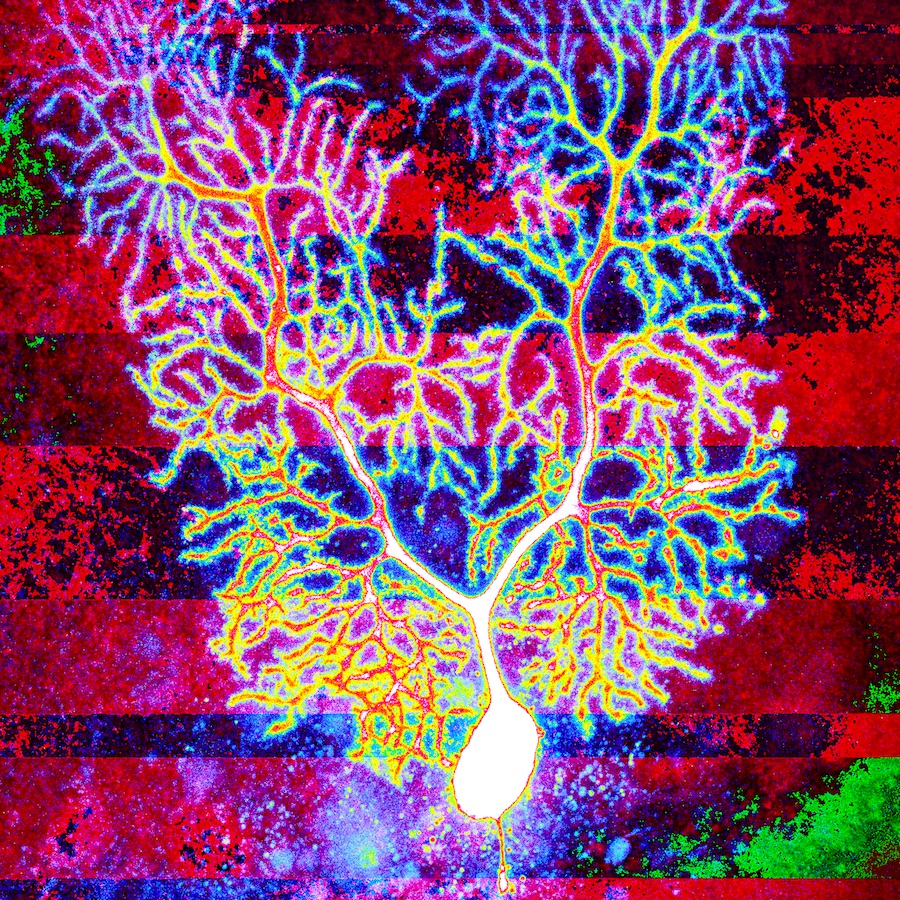 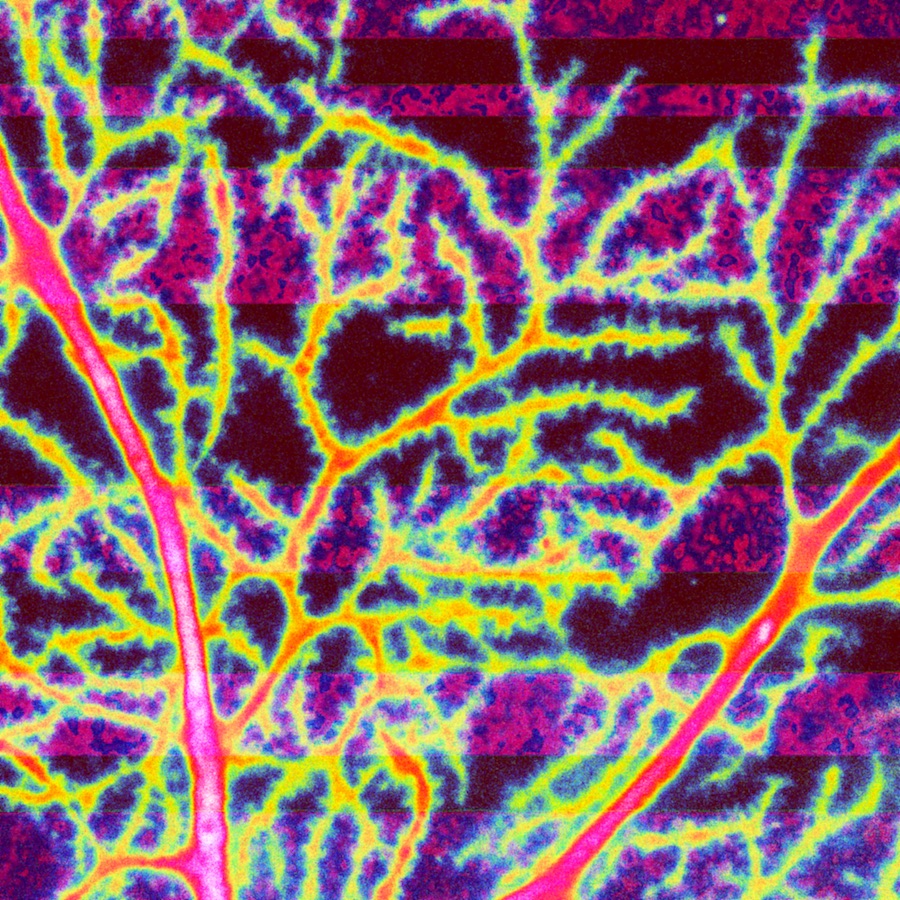 The most critical material for my science-art is literally the brain.  To create my art, I work with neurons embedded in real brain slices.  All of my images feature real neurons, because the only way to learn about how the brain works is to study the real thing. 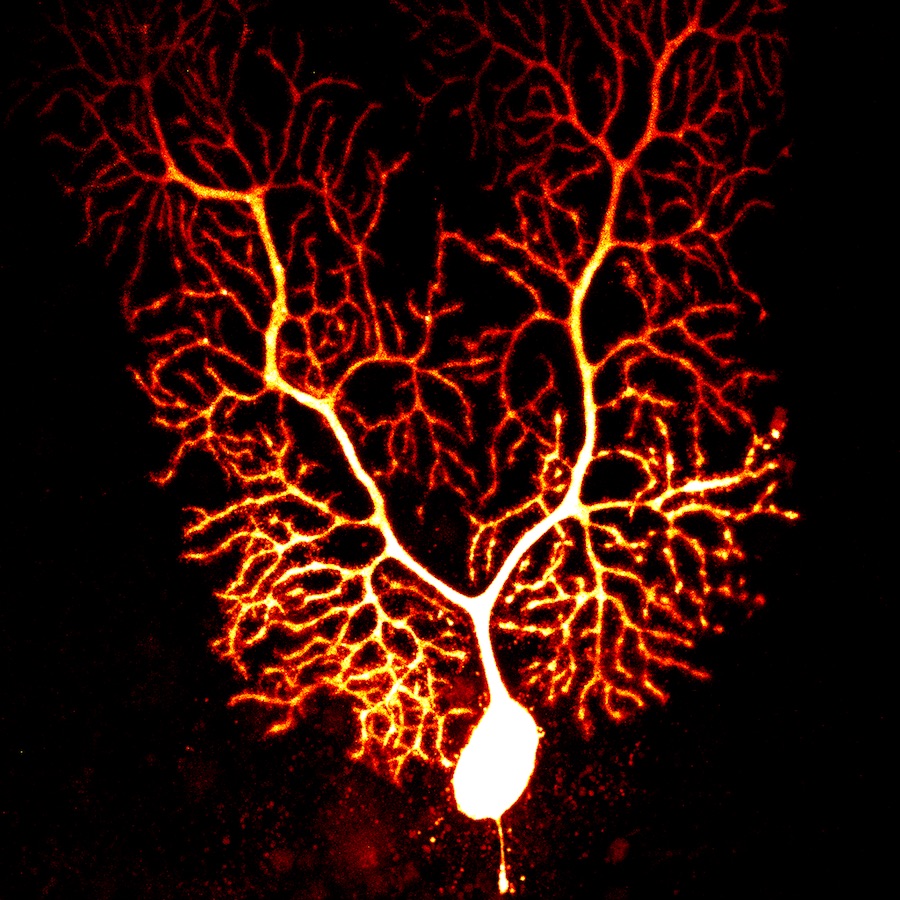 During my experiments, I place a brain slice under a confocal microscope, and use a tiny tube (pipette) to fill one single neuron with fluorescent dye.  The microscope is necessary because neurons are very small.  In fact, the neurons I study are around 100 microns long – and that’s actually big compared to other types of neurons.  Under the microscope, I bring the pipette over to the neuron, open a portion of the neuron’s membrane, and let the dye flow into the neuron and all its branches.  The dye attaches to calcium ions inside the neuron so I can measure how calcium moves around during my experiments.  Calcium is important for the molecular processes of learning and memory, so knowing how it moves around a neuron gives us insight about how learning works. 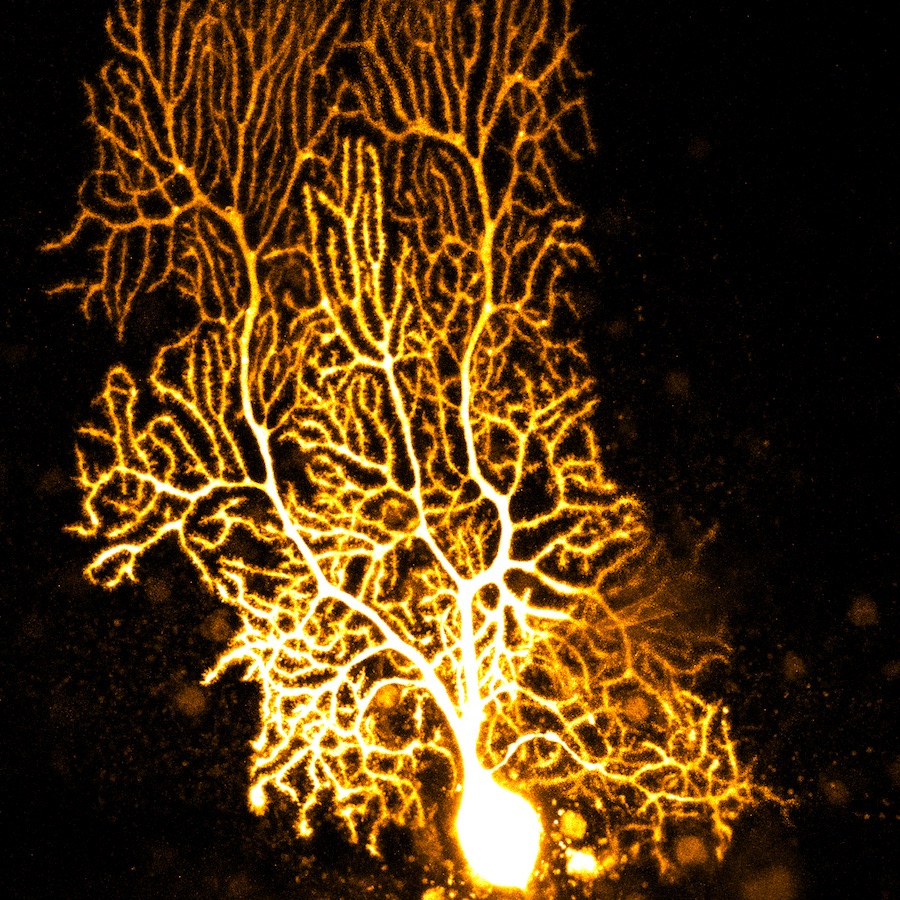 Once the neuron is filled with fluorescent dye, I use lasers to make the dye glow brightly.  After I am finished measuring the calcium currents, I use the microscope to take a three-dimensional picture of the neuron to show exactly which part of the neuron has specific calcium movements.  Coincidentally, these images also make awesome brain art.  Once I started working with these neurons, I immediately recognized their tree-like structure – a shape present in many parts of nature.  Inspired by these “tiny trees,” I began experimenting with using different combinations of lights, in addition to lasers, to create neuroscience-based art. 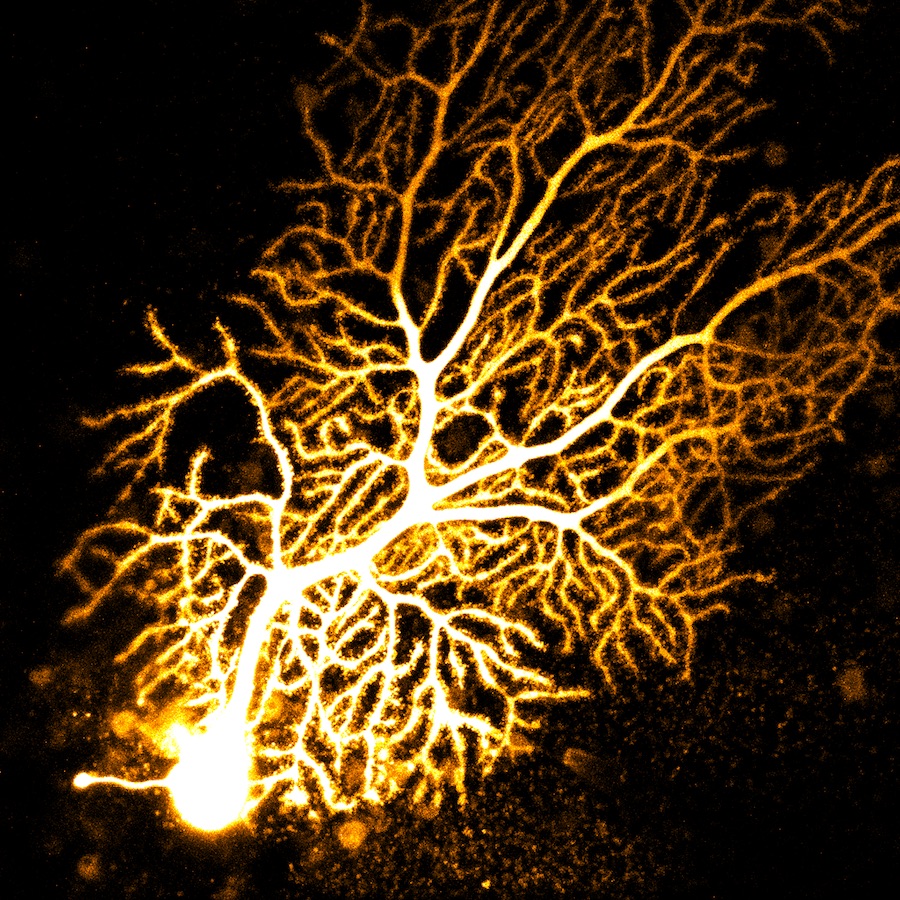 Which artwork/exhibition you are most proud of?

I’m really excited about a collaborative project I worked on with Richelle Gribble, a California-based artist who creates artworks based on networks and concepts of interconnectivity.  Richelle and I were partnered together in The Bridge Residency, a virtual residency program through the SciArt Center.  The goal of our partnership was to bridge the gap between science and art.  To achieve this, Richelle and I created The Trees Inside Your Brain, an illustrated book which explains concepts in neuroscience using a question-and-answer method.  Each question has an answer and an accompanying illustration.  The book includes texts about autism research and the cerebellum, and there’s even a section where we do some neuroscience-myth-busting. 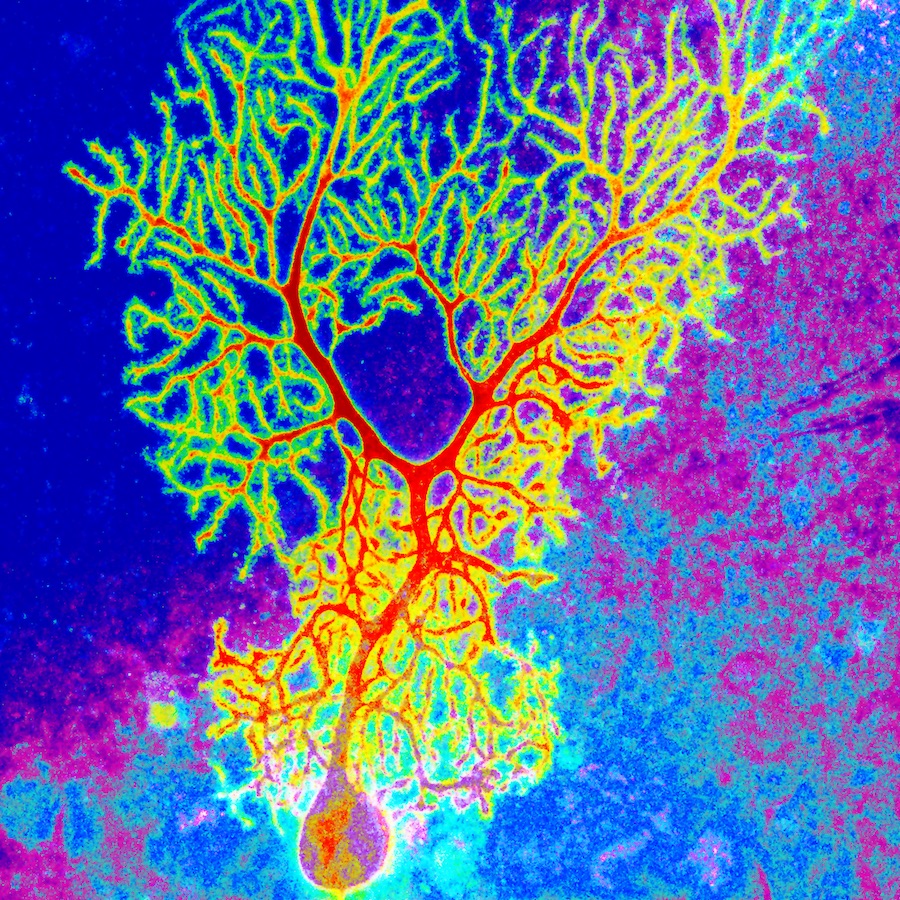 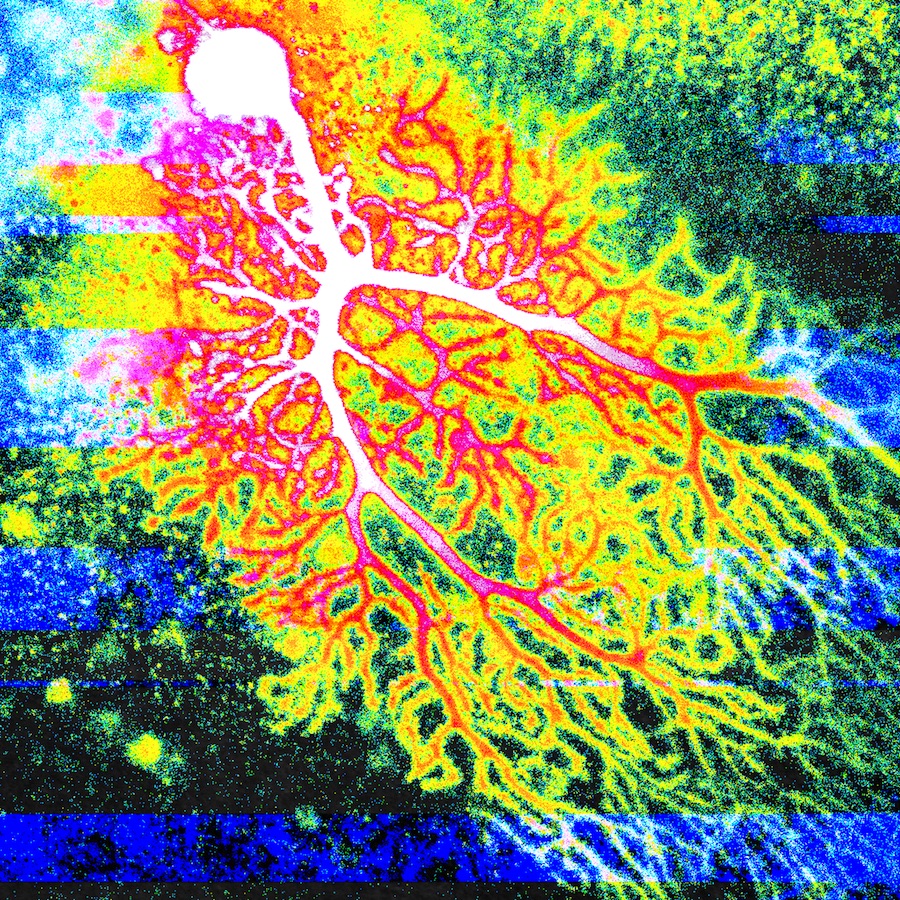 I draw inspiration from Andy Warhol, an artist who used pop art to investigate everyday objects.  I am also inspired by Santiago Ramón y Cajal, a scientist who drew neurons and neuronal circuits by observing them under a microscope, and sketching what he saw. 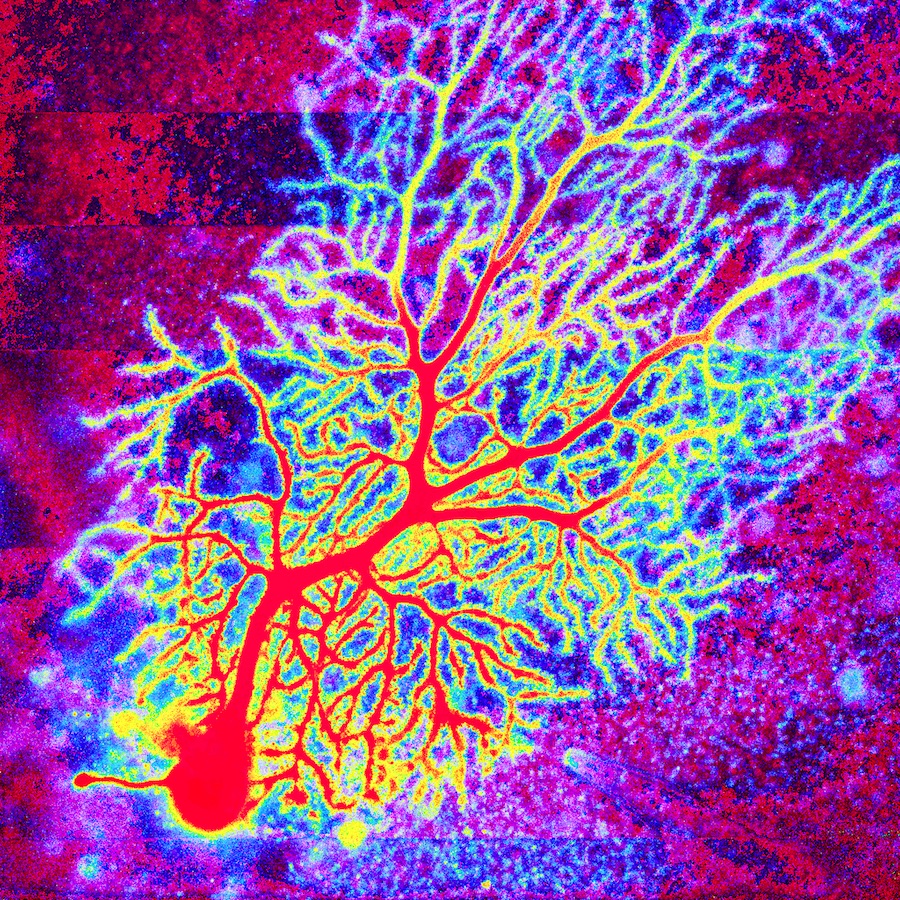 I’m a graduate student at The University of Chicago, working toward my Ph.D. in Neurobiology in Christian Hansel’s laboratory.  My dissertation research focuses on Autism Spectrum Disorder and how it affects communication between neurons in the cerebellum.  The cerebellum is unlike the rest of the brain because it has a very rigid structure.  The neurons that make up the cerebellum are precisely organized, which leads very naturally to science-based art.  My science-art interests are rooted in a fascination with patterns that appear in nature in both microscopic and macroscopic levels.  In the cerebellum, the shape of the Purkinje neurons bears striking similarity to the shape of a tree.  I am intrigued by the fact that this branched shape can be seen all over nature, and enjoy speculating about why it has formed over and over again.

Recently, I was awarded a Passion in Science Award from the New England Biolabs in the category of Arts and Creativity for my neuron art and book.  During the award ceremony, I gave a talk about my work bridging science and art, and using art as a means for both creativity and for getting people excited about science.