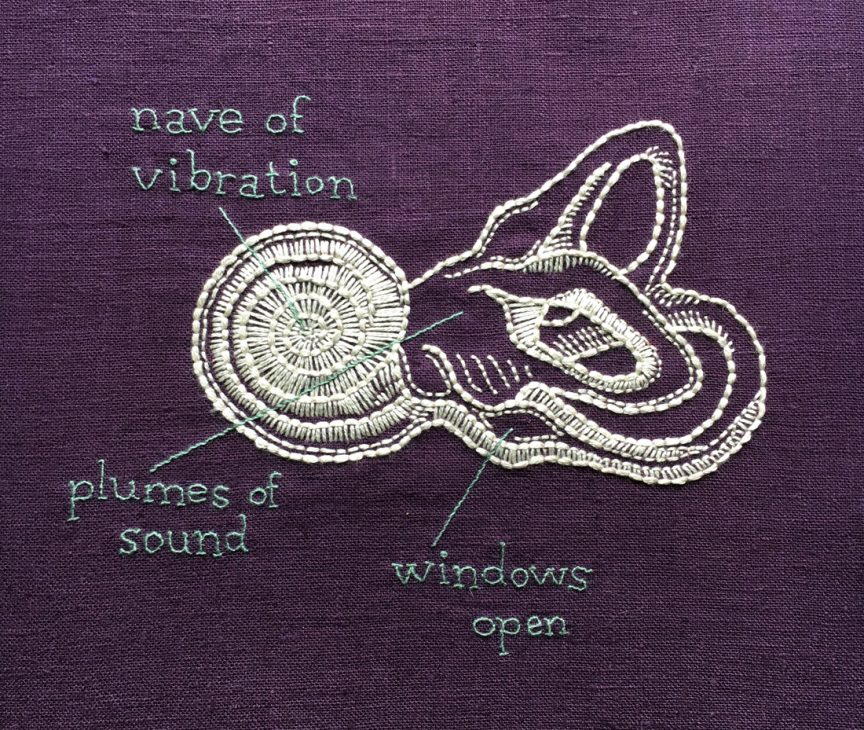 I’ve always been an artist and was drawn to all the arts from a very young age, but I also grew up in a household where science was seen as important and scientific inquiry [was] encouraged. My mother is a scientist with degrees in physiology, hematology, and toxicology and I spent time in her lab as a child. Our house was full of science magazines and my mom’s physiology textbooks, and all three of my younger siblings have gone into the sciences, though my youngest sister is an architect with a physics/visual art undergraduate degree.

“Art is my first priority, but science keeps influencing me.”

Art is my first priority, but science keeps influencing me. I didn’t focus on science as a major influence until the 1990s, when I was at a poetry colloquium led by Erin Mouré. Erin encouraged us to use dense texts to practice “homophonic translation” and I used the 1800’s medical textbook Gray’s Anatomy as a source text. At this time I was also doing a yoga teacher training program taught by a woman with a degree in kinesiology, and she arranged for us to observe at a gross anatomy lab. Ever since then, science, and especially anatomy, has been a major influence in my work.

I’m primarily influenced by anatomy, though there are aspects of physics and neurology that creep in now and again because of my lived experience. As I mentioned above, Gray’s Anatomy has been a rich source of text and images from which I am inspired to create my work. I’ve also used Vesalius’ De humani corporis fabrica libri septem as a starting point for some pieces.

The physics aspect has mostly to do with my music composition and performance practice. When I did my undergraduate degree in music at York University, all arts students were required to take one science class. I wanted to take anatomy with the dance and visual arts majors, but had to take the physics of light and sound with the film and music majors. I continue to be surprised at just how much that physics class influences my work.

Since becoming ill with myalgic encephalomyelitis (ME/CFS) in 2015, my more recent work has been primarily in fibre arts. ME/CFS is a neuroimmune disease, and I have many neurological symptoms to deal with because of it. In 2016, I started embroidering my neurological sensations of pain and paresthesia as a way of both better understanding them and as a practice of “exquisite attention,” which made them feel less disruptive and less painful in my day to day….

I’m a multidisciplinary artist and—although I used to work mainly in text, sound, theatre and dance performance, and video—my current work is primarily in fibre arts, especially embroidery, as well as a bit of writing. ME/CFS has meant that I am now physically disabled, so performing is impossible for me at the moment. One of the main symptoms of ME/CFS is PEM (post-exertional malaise), and if I exert myself past my very low physical or cognitive energy baseline, I end up incredibly fatigued and in a lot of pain. I’ve only recently been able to play the piano for short periods again but cannot sing as of yet. Embroidery has meant that I can continue to create work without aggravating my symptoms. Embroidery is a slow art, and something I can do reclining, so it doesn’t exacerbate my symptoms at all. I do have some ideas for video work as a substitute for performance but haven’t recovered quite enough yet to attempt them.

One of my older pieces, my video-poem “susurrations” (2008), is something I’m very proud of. It feels like a truly multidisciplinary piece to me and I love how it plays on both the beauty of anatomy as well as the literally “gross” part of gross anatomy. More recently, I am very proud of my Body Map embroidery (2016), for which I spent a couple of months freehand embroidering all of my invisible neurological symptoms onto a female figure as I felt them. It really illustrates the myriad of symptoms that come along with ME/CFS. My embroidery of the bronchial system, “she breathed” (2018), is my largest fibre art piece to date and I’m very pleased with that one as well.

I’m very inspired by older anatomical artists. It fascinates me how they depicted the body without the aid of photography or the imaging techniques we have now. I’ve already mentioned Andreas Vesalius, as well as Henry Vandyke Carter, the illustrator of Gray’s Anatomy. I’m fascinated by the waxwork anatomical venuses created by Clemente Susini as well as by Ramón y Cajal’s neurology drawings and Ernst Haeckel’s biology drawings and groupings. Björk has done some fascinating SciArt work with her music and videos and Meredith Monk’s music theatre pieces that combine spirituality, ecology, and incredible vocal explorations have definitely influenced my work both sonically and visually. I absolutely adore Greg Dunn’s neurology pieces and Rogan Brown‘s exquisite paper-cut work. Fibre artist Vanessa Barragão‘s huge rugs of coral reefs and Louise Bourgeois’ interdisciplinarity are also absolutely inspiring.

I think that the arts and humanities are absolutely a very important aspect of science communication. Perhaps because I grew up around both science and the arts, I’ve never seen a reason to separate the two. Science is a humanist endeavour to me. The exploration done through scientific inquiry tells us much about ourselves and how we are related to the earth and to the universe around us. Scientific language is often dense and requires real expertise to understand, which is why it is so important to blend science with the humanities. It is through art that we can communicate these ideas and these inquiries to deepen our and others’ understanding of the whole.

“Scientific language is often dense and requires real expertise to understand…It is through art that we can communicate these ideas and these inquiries to deepen our and others’ understanding of the whole.”