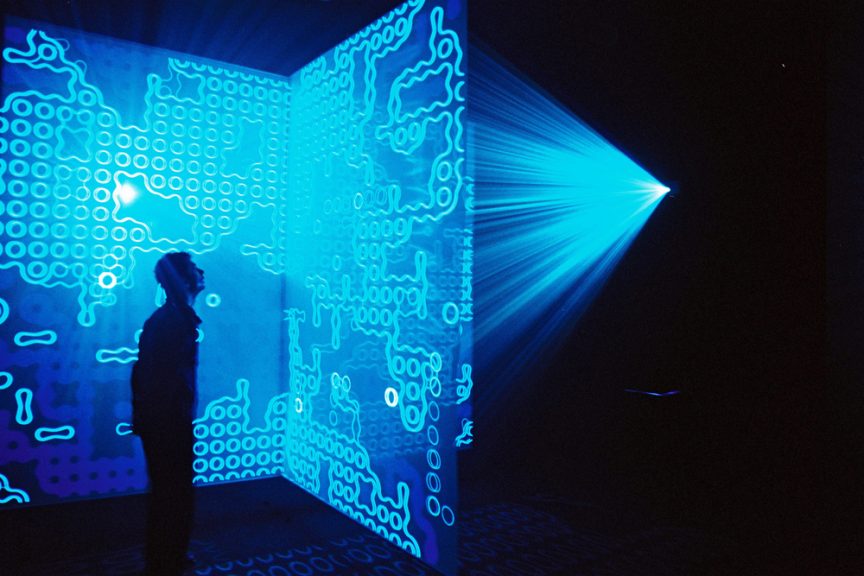 To be honest, I don’t remember. I was interested in image making, chemistry, and computers from a very young age. First I was interested in film photography, which also got me interested in chemistry. I had to set up a darkroom and began wondering about how to work with the chemical processes in photography in an artistic way. I also liked building electronics and built my first computer in my early teens (it was very crude by today’s standards) and used it to control a movie camera. I then discovered that you could use computers to draw, and if you pointed a movie camera at the screen, took a single frame, and then changed the image slightly and took the next frame, you could make computer animated films. It sounds silly now, but back when I started this was pretty amazing.

Biology, Mathematics, and Computer Science. Growing up in Australia my school field trips included camping at many beautiful and remote locations in the Australian bush. Towards the end of high school, as part of a Biology course, we spent a week in a pristine area of Eucalypt forest. One of the things we did was to study a 1 square metre area of native bush intensively over the week – I couldn’t believe how many different plants and animals could be found in such a tiny area of forest! Later I got interested in mathematics and computer science and went on to study them at university. I liked math, but was always looking for ways to turn symbols and numbers into images. Computers gave me the ability to simulate and manipulate space and time in ways that no other medium could. I started using computers to make abstract films and animations and ended up going to film school to study filmmaking and animation. I was lucky to find people who were willing to support my ideas of using computers creatively and have been working on expanding human creativity with computers ever since.

“I was lucky to find people who were willing to support my ideas of using computers creatively and have been working on expanding human creativity with computers ever since.”

Mainly computers—much of my creative practice is realized through software. Computers are great at ‘meta-creation’; you can design a process that creates things, and then use the computer to implement that process so that it becomes a creator. Processes such as evolution are generative in that they perform what has been called “database amplification”. You start with a small, low-complexity specification and use a process to generate more complex outcomes. A good example is DNA. The information sequence in DNA is (relatively) simple compared to the complexity of the organism it codes for.

In more recent work, I’ve been designing custom robotics and working with real biology in a co-creational way. Rather than simulating biological processes in the computer, I’ve been working with ways that artificial and natural intelligence can collaborate and co-create. We’re currently working on a robotic project where the robot nurtures and supports biological growth, but also influences how it grows and tries to change it. The challenge and provocation is to consider non-human design as part of the process, so rather than just mimicking or appropriating biological process for human purposes, we’re designing artificial systems that work with and for biology.

I think Cybernetic Serendipity (1968) remains one of the seminal exhibitions of art and technology. I was only 3 years old when the exhibition was showing, and even though the artworks and technology were crude by today’s standards, the exhibition seems symbolic of heralding the optimism of the computer age, especially for creativity and the arts. While much of that optimism failed to materialize, the concepts and ideas are still being challenged and explored today. I should also mention the influence of philosopher Max Bense and the exhibitions of Georg Nees as also being seminal for modern thinking about generative creativity and the conceptual impact of programmable computers in the arts.

A friend passed on a copy of the first Artificial Life conference proceedings (1987) and I read the opening essay by Chris Langton. I thought it was a totally amazing concept that life could be defined by mechanisms over materials, and that other, non-biological media might support “life-as-it-could-be.” I was lucky to meet Chris a couple of years later and learn more about how he developed his ideas.

Reading Richard Dawkins’ The Selfish Gene also had a big influence on me, and subsequent books like The Blind Watchmaker inspired me to build my own evolutionary art systems—generative computer systems that discover new designs through interactive evolution. Around the same time, I met British artist William Latham. Latham independently pioneered the technique, at first evolving forms by hand and then later using computers at IBM in the late 1980s. Shortly after, Karl Sims, who at the time was working for Thinking Machines, released a seminal video and some papers on interactive evolution for creative purposes and the whole field of evolutionary art began.

Find out more at the Sensilab or Jon McCormack’s website.