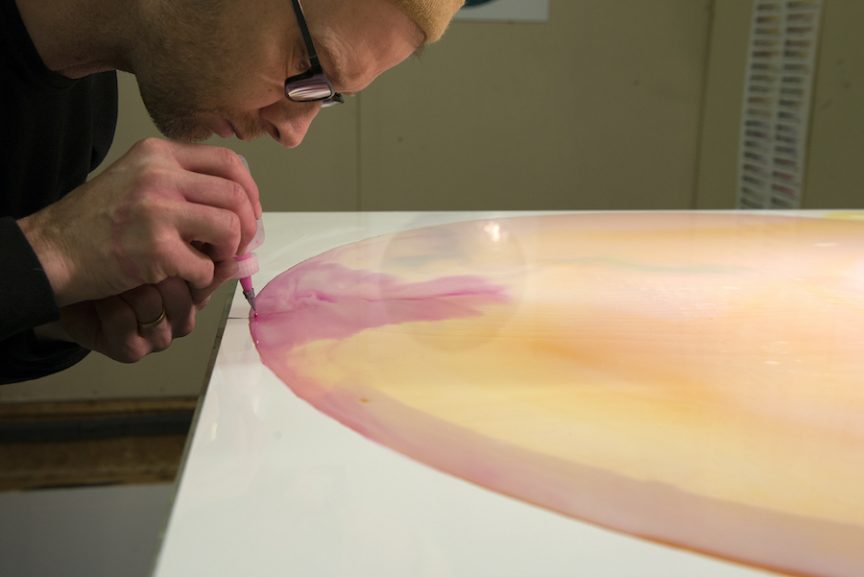 I don’t know when art came – it has always been the way I make sense of my experiences – it is inseparable from my identity. My experiences, I learned over time, are not exactly normal. Even from a very young age when I would relay my interpretations and observations that seemed logical and concrete from my perception, the reactions I get from others made it clear we were not living through the same experiences. I worried a lot of people. The artwork I made from my interpretations were derived from detailed and extended observations. I didn’t know they were scientific until later; I didn’t have the words or understanding.

I formally tied them together when I was given a choice of criminal punishment or counseling after I had shown extremely poor and dangerous judgment in my early teens. I agreed to the counseling. My counselor was a chemistry professor whose charge was to elucidate the very real consequences of my own bad chemistry as a deterrent. However, what ended up happening was that we would sit in his office for hours discussing black holes, evolution, geology, quantum physics, etc. This is when I learned I could deconstruct my interpretations in relation to scientific laws and principles in an attempt to be able to relate ‘normally’ with others. I have been a science junkie ever since. 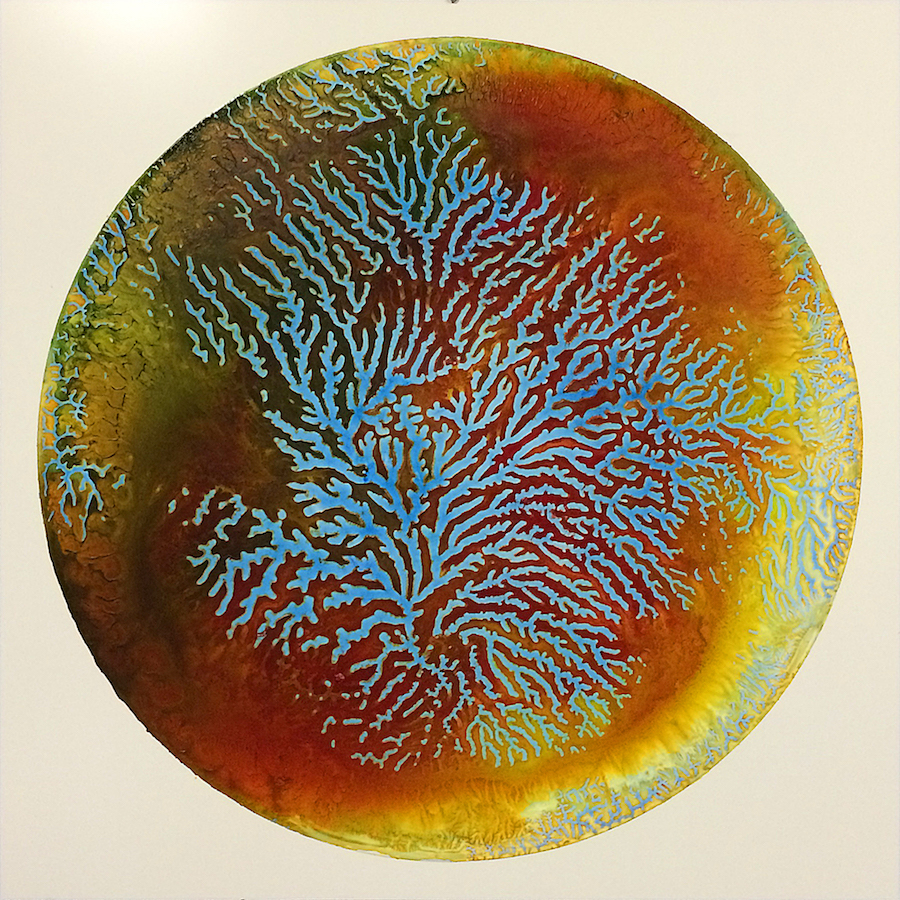 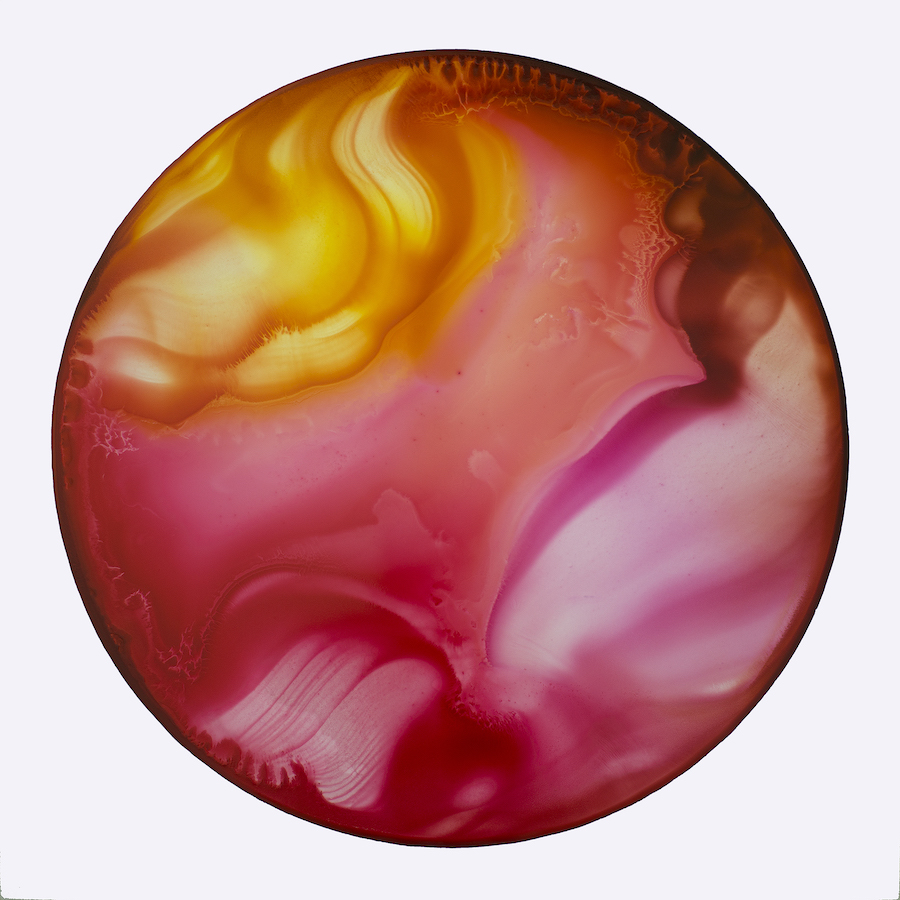 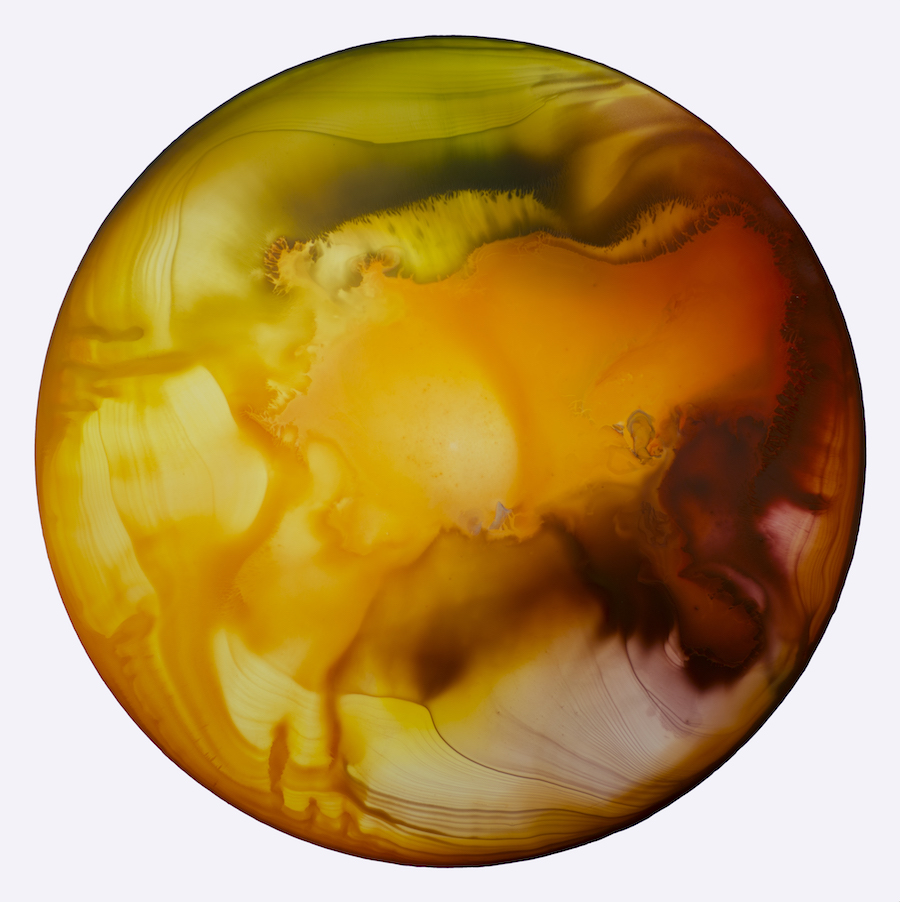 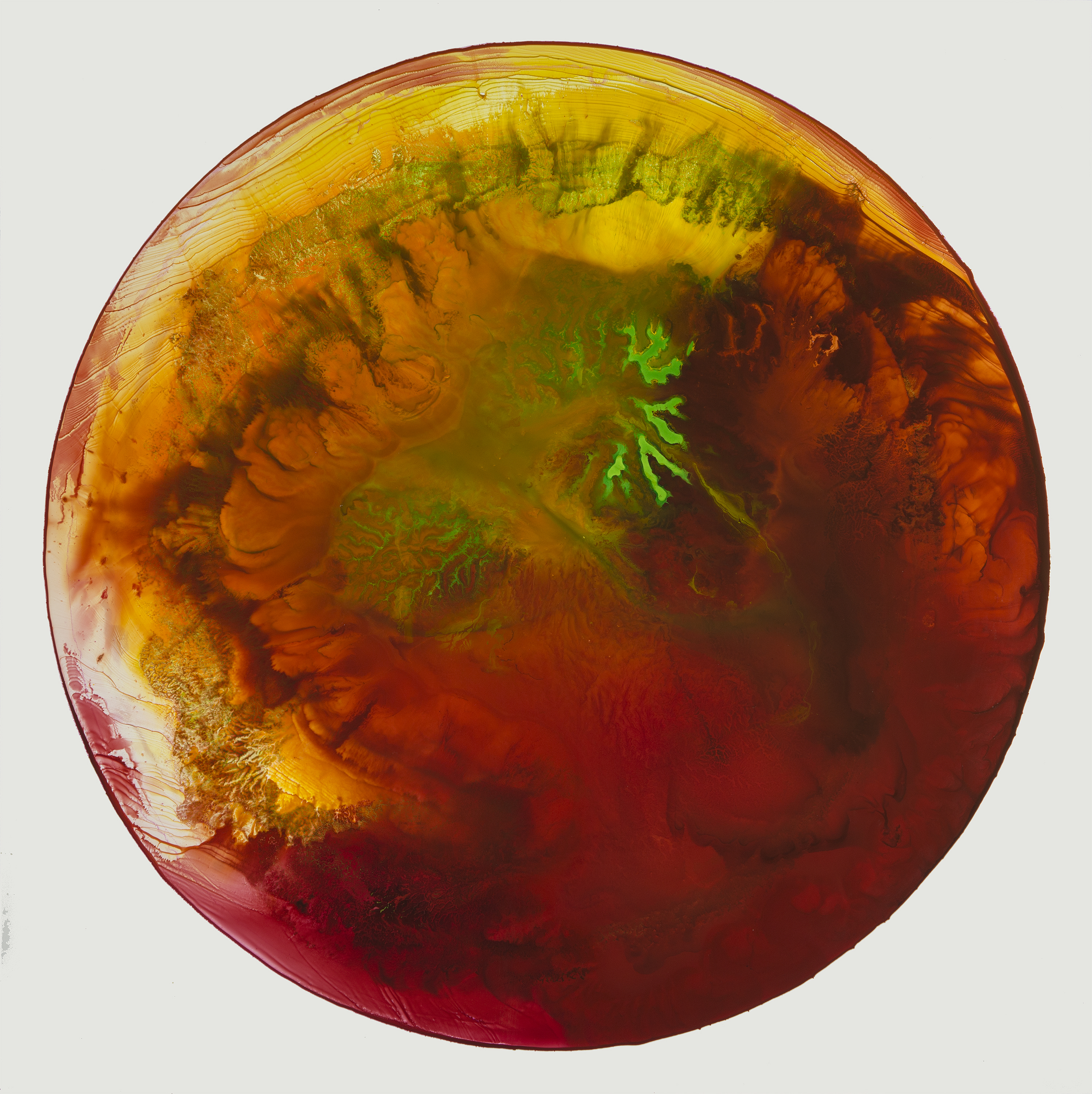 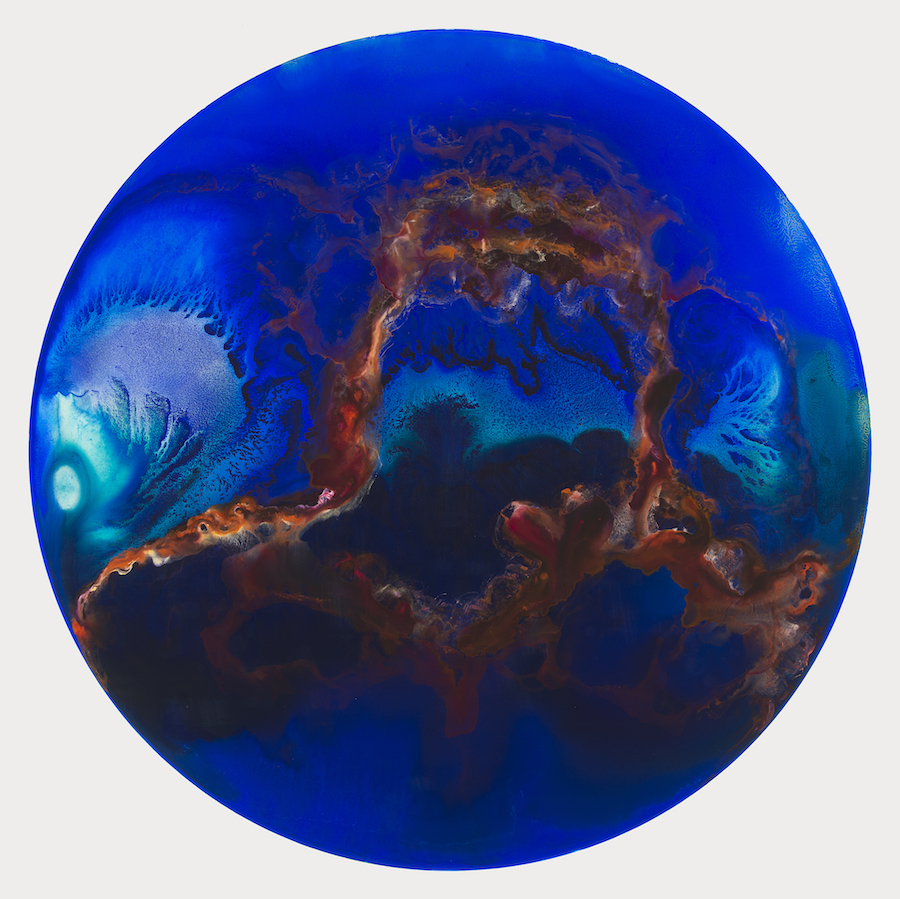 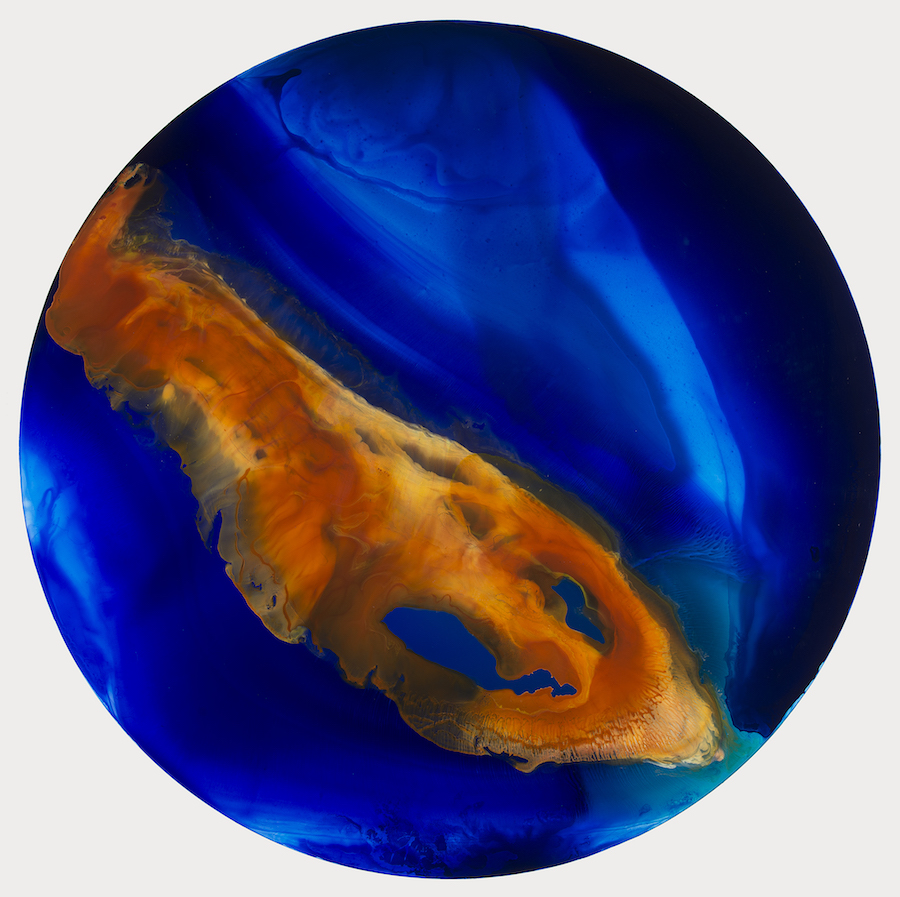 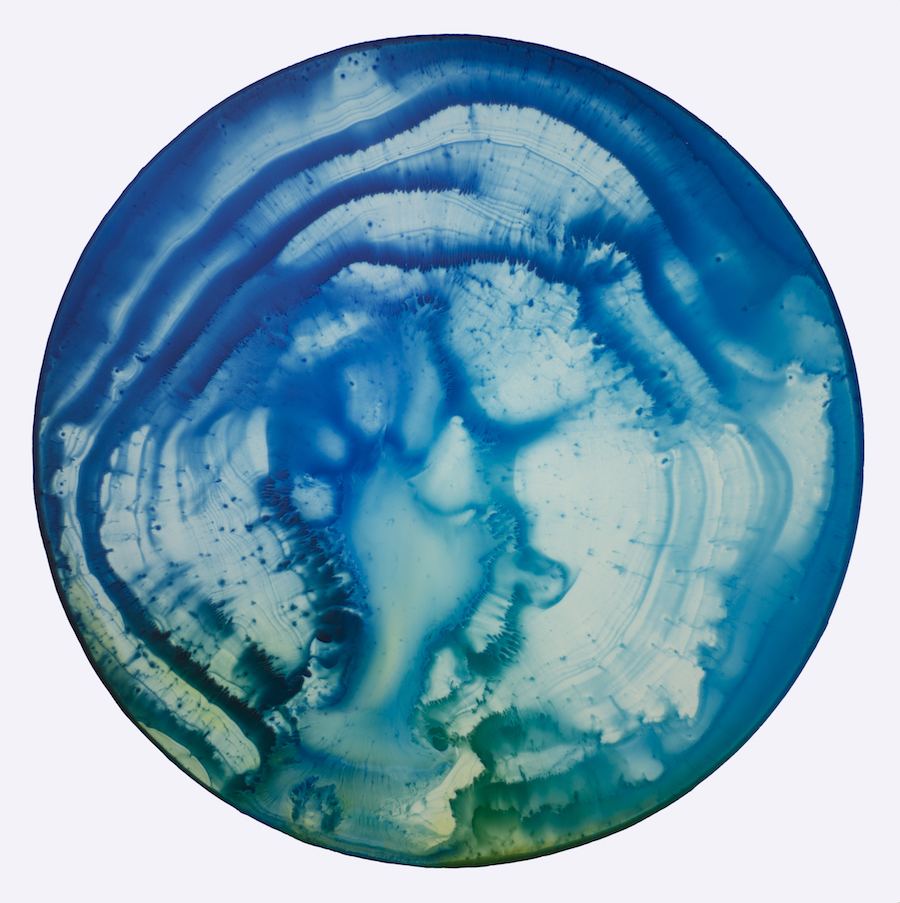 The Process: I work from my interests in natural phenomena and seek to explore these processes using the mediums of paint and time. Dozens of layers of different colors mixed to different viscosities are juxtaposed, superimposed, and intermixed with one another then allowed to coagulate, amalgamate, collude and interact with environmental forces (humidity, air movements, temperature, evaporation, reticulation, etc.) over a period of time ranging from days to weeks to months.

The Surface: The chroma paintings are on aluminum composite panel, usually two thin aluminum sheets sandwiched around a plastic core. This material is primarily used in exterior commercial signage and is very durable, slightly flexible, but also lightweight. It is a conservationist’s dream as it is made to withstand exterior conditions, will not corrode and expands and shrinks far less than standard surfaces, which should eliminate any cracking of the paint film. I choose varieties that have the highest recycled content.

The Paint: These works primarily use water-based paints, dry pigments, and other dry media. Pigment manufacturers and types are chosen with permanency and sustainability in mind. This goal is more attainable now since I have been partnering with Ohio University engineer Dr. Guy Riefler to develop paints with pigments derived from toxic runoff from abandoned coal mines – acid mine drainage, or AMD for short.

In Southeastern Ohio many of the streams run orange. Throughout the first half of the 20th century strip mining and room-and-pillar mining were common throughout this region.  Forests were clear cut, soils scraped away, and tunnels dug to remove the coal. A few active coal mines continue in the region, but by the 1970s most of the mining companies had moved on leaving behind open mines and disturbed land, with inadequate restoration.

Much of the forest has now regrown, although it is young, but the underground mines continue to release toxic water to streams.  When abandoned, many of the mines fill with water, and the oxygen and water react with mineral surfaces that had been buried for 300 million years.  When sulfides are present, these are common in Appalachian coal deposits, very high concentrations of sulfuric acid and iron are produced. In one local seep, over one million gallons per day of polluted water enters Sunday Creek. This water has a final pH below 2 and over 2000 lbs of iron per day. It is like junking a car in the stream every day. However, Engineer Professor Guy Reifler started asking what if the iron sludge could be sold as a valuable resource rather than disposed of as a waste product? What if treating pollution could be an entrepreneurial endeavor rather than a societal cost?

Dr. Reifler approached me in 2009 to see if I could help fine tune the pigment for quality including grind, color, compatibility with various paint vehicles, etc. The next year we were able to turn the powdered iron minerals into a working paint for the first time. Recently I’ve developed a relationship with a large paint company that has agreed to produce a batch of five hundred 37ml tubes of artist grade oil paint using our pigment. These paints will be distributed to artists around the world and the resulting artworks curated into a touring exhibition highlighting our efforts and generating broader discourse on developing more sustainable art practices. (stay tuned!)

With little funding and lots of skeptics, we are starting to refine a process that can continuously treat AMD, restore a stream for aquatic life, and collect iron pigment that can be sold offsetting operational costs. Based on our best estimates, we should be able to create a few jobs and produce a small profit, while eliminating a perpetual pollution source. We are currently securing funding for a pilot facility to demonstrate the process at a field site and begin producing large quantities of pigment. Hopefully, in another 10 years we will have started a new industry in Southeast Ohio that turns pollution into paint while restoring our watersheds. 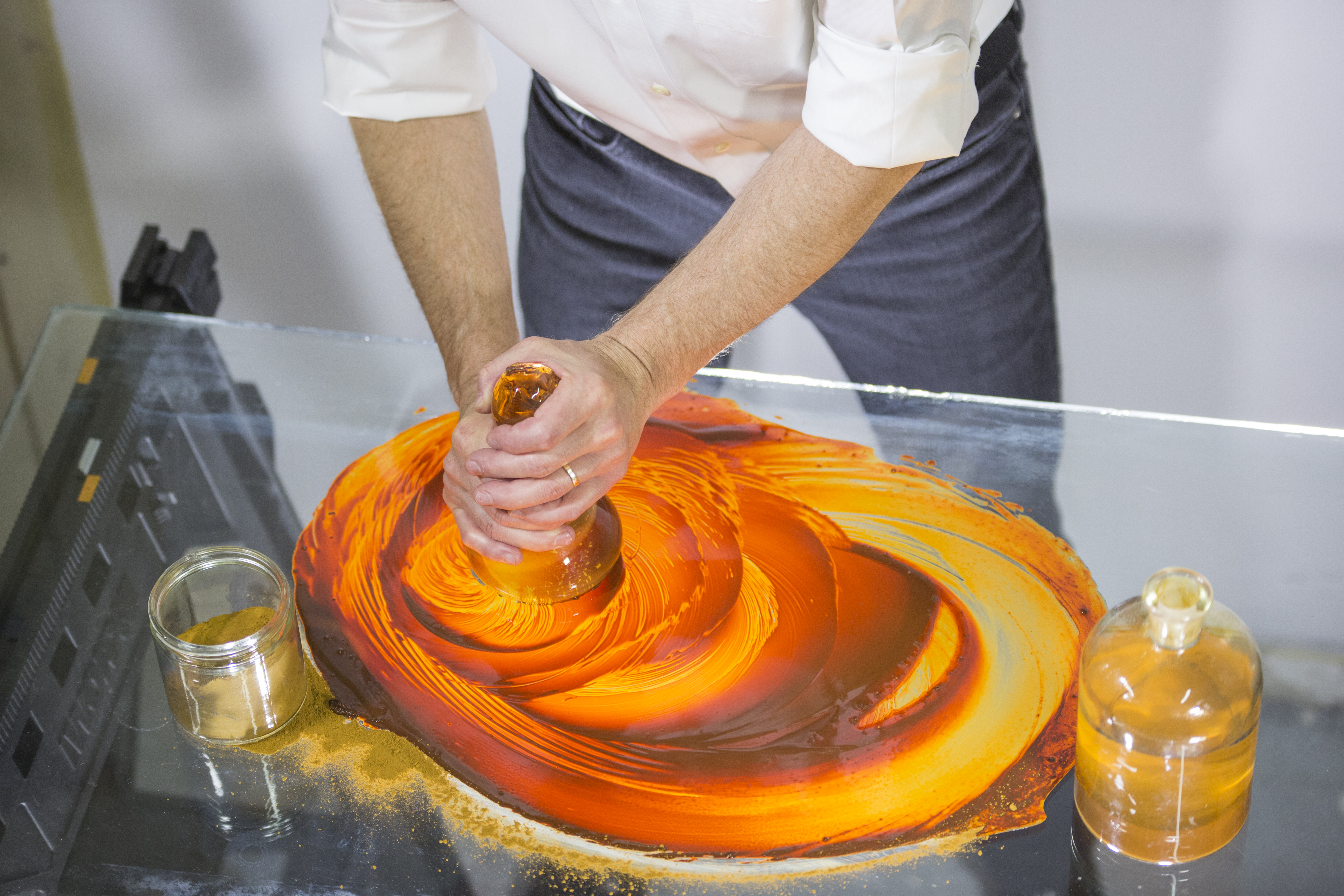 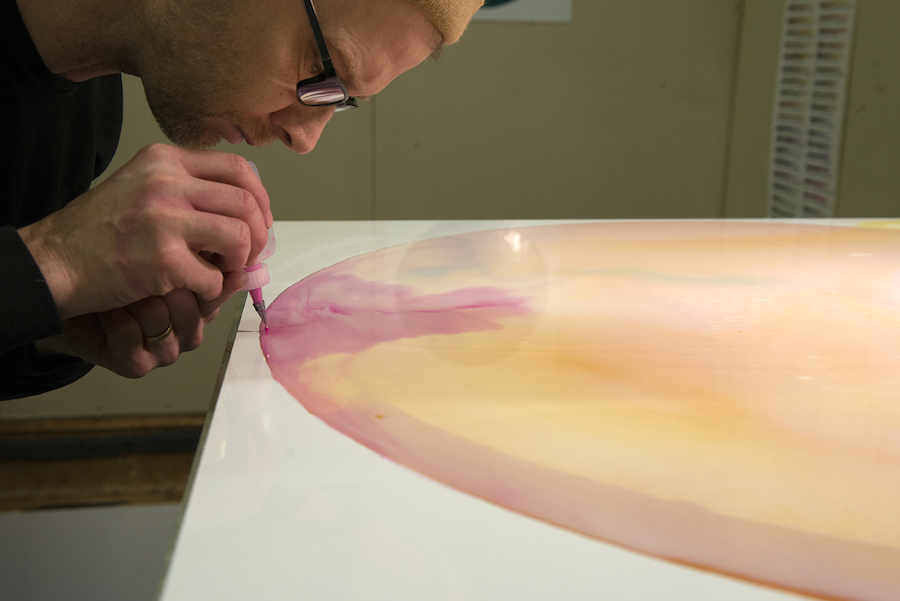 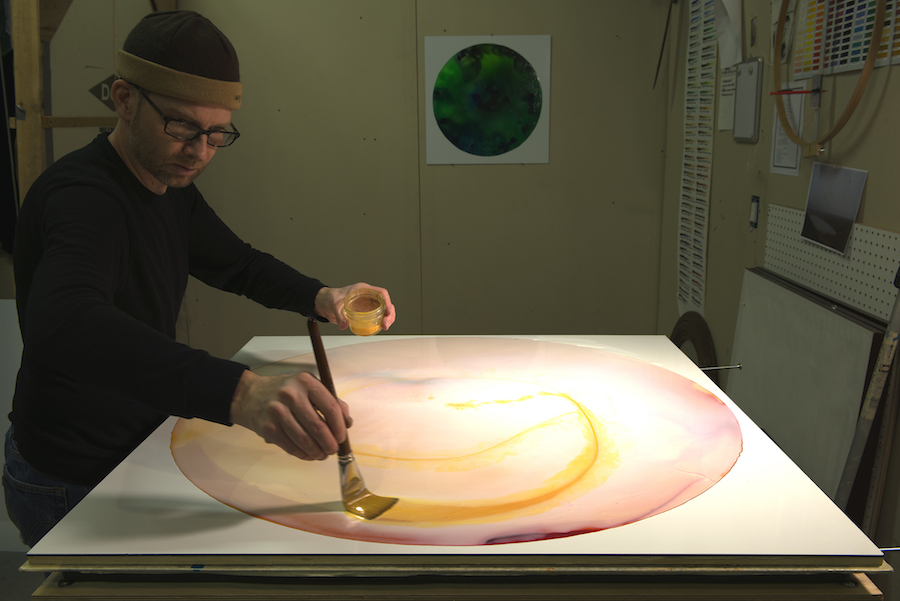 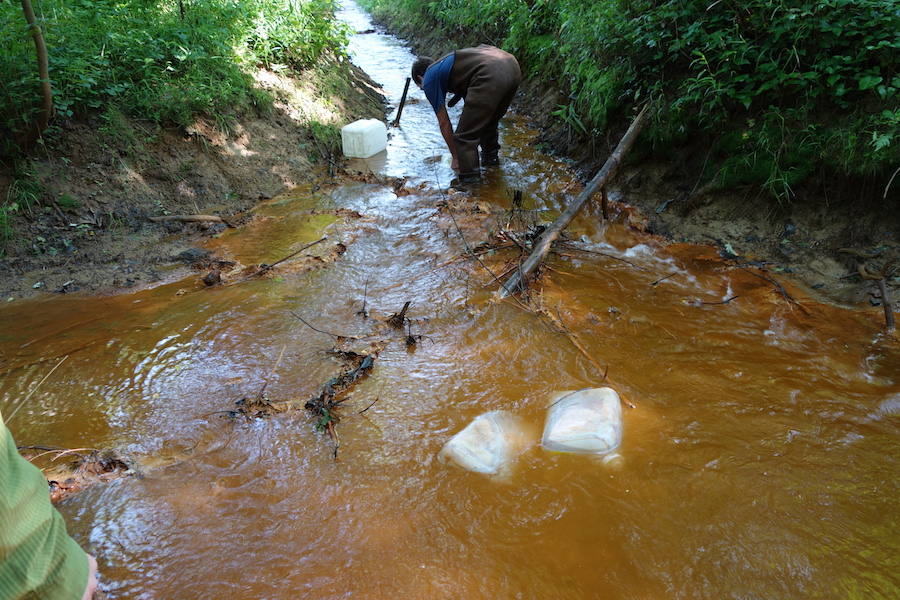 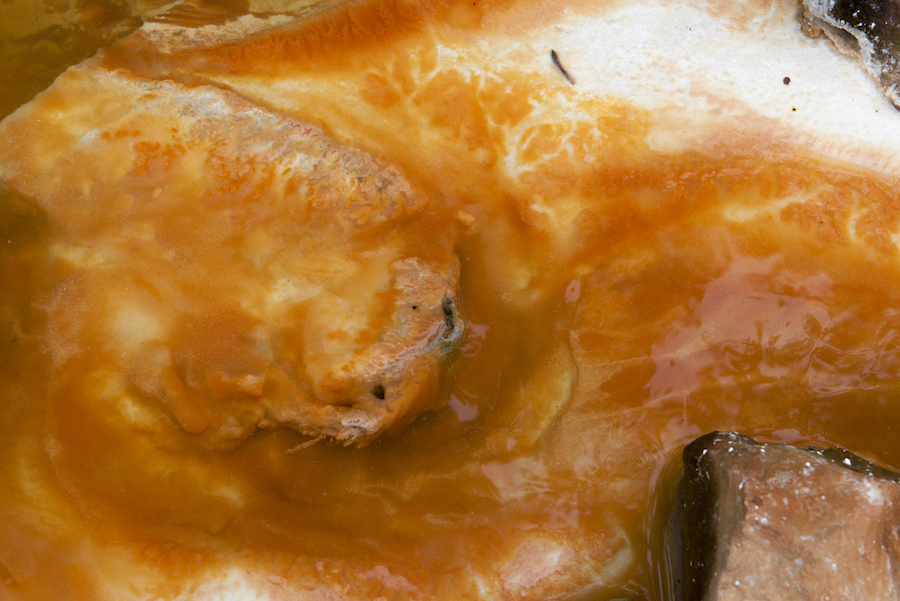 This is an unanswerable question for me because I hope my best work is ahead of me, while at the same time each past success, show, collaboration or failure was critical in the growth to where I am now. But I think the exhibition SCALE and my current body of Chroma paintings (part of the Toxic Art series) will give a sense of what is possible when I collaborate with science and scientists, as well as collectively work with groups of artists. SCALE because it is the first time I truly collaborated with scientists primarily Dr. Thomas Statler and Dr. Mangala Sharma – both exceptional humans and passionate astrophysicists. And Chroma because the dialog that develops around sustainability and the environment when I exhibit the works is wonderful! Who knows what’s next! 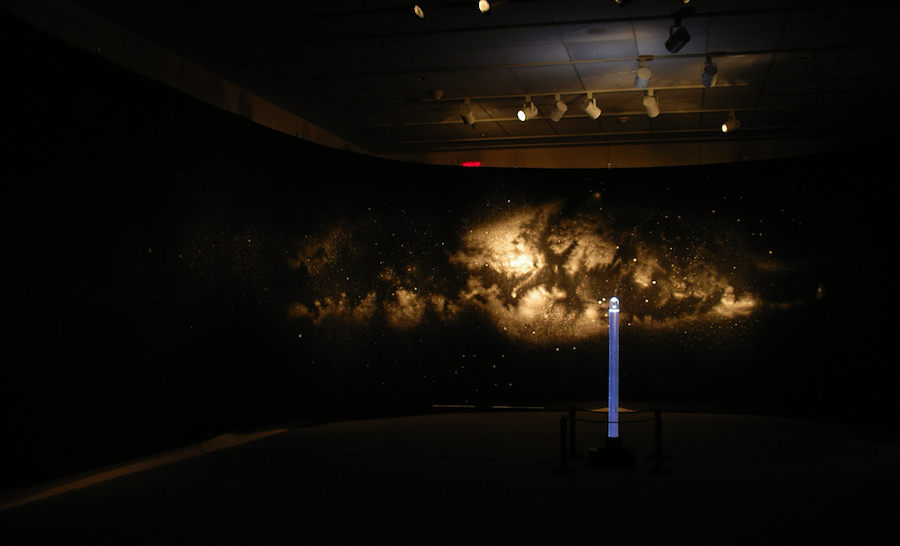 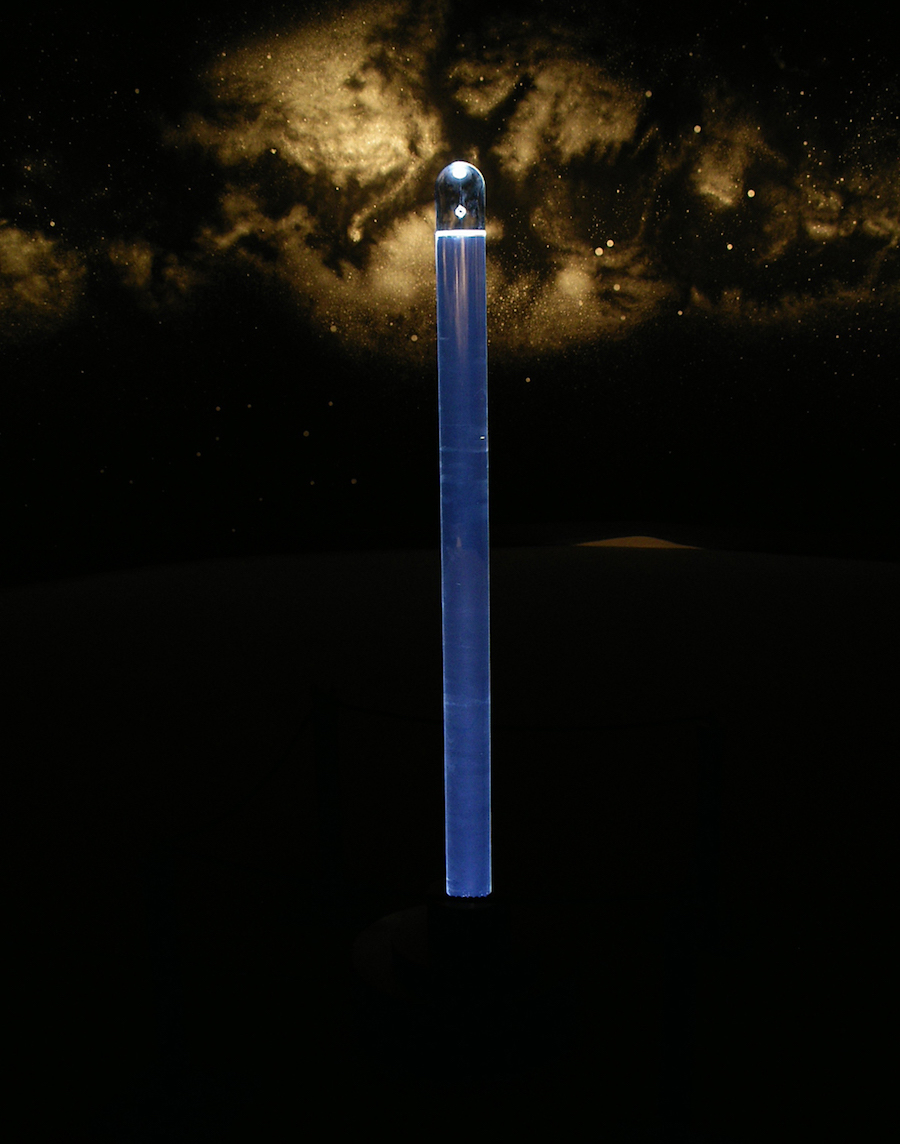 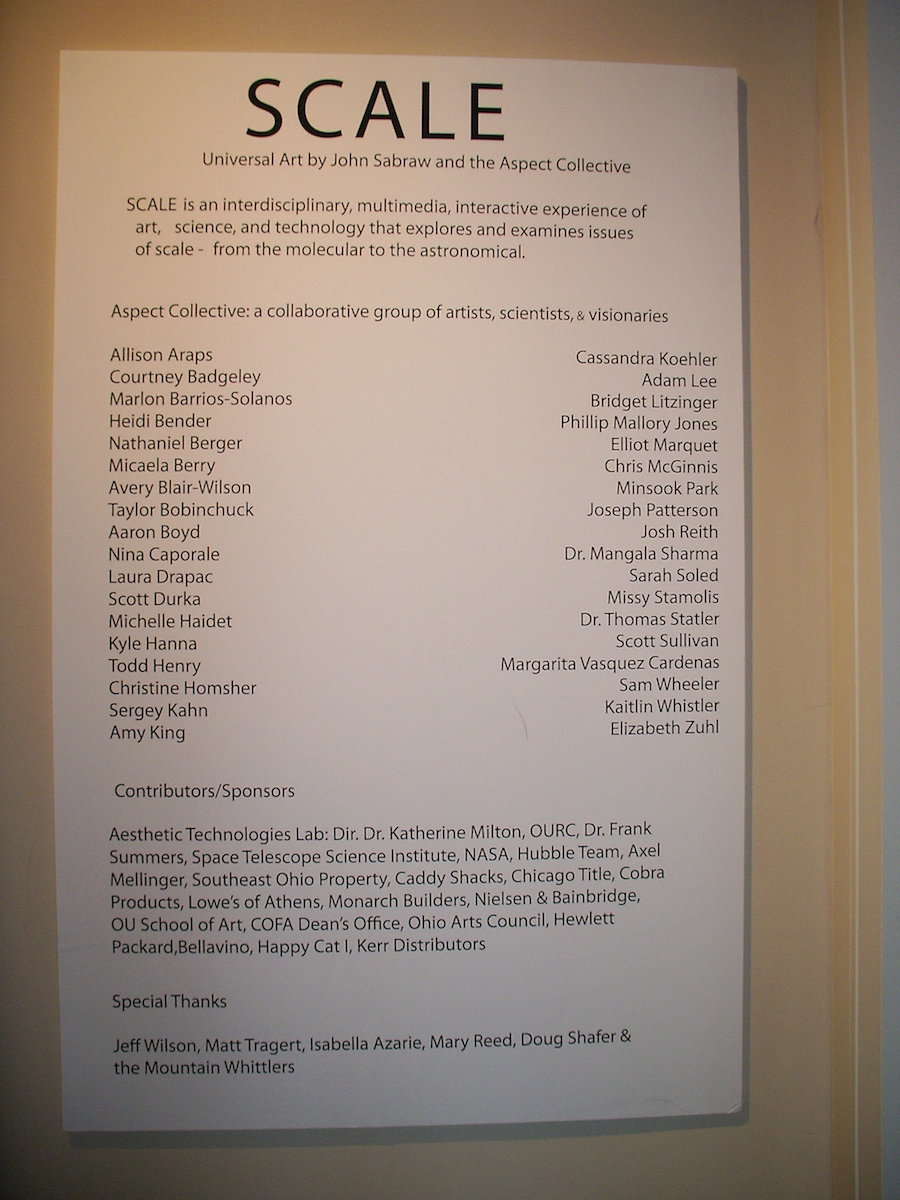 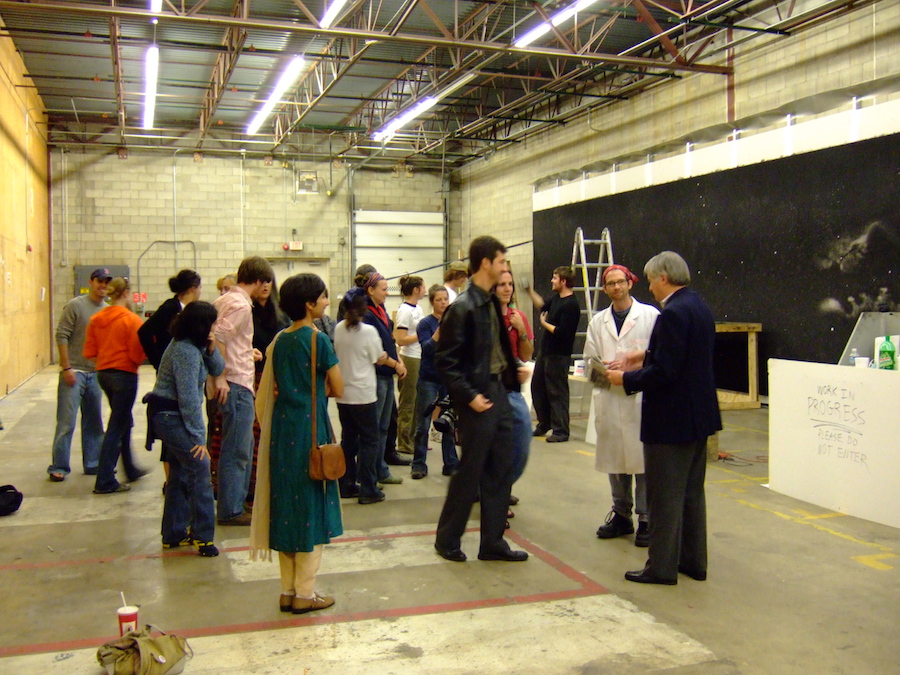 Thank you. Thank you, whoever you are, for being you. My trajectory is intrinsically linked to all the amazing people I meet who have very different viewpoints, experiences and areas of interest and expertise. Scientists, teachers, artists, chefs, gardeners, students, poets, writers, librarians, city council members, watershed coordinators, et al, and whoever you are, continually rebuild my faith in humanity and strengthen my desire to better our world and myself. I can’t wait to meet you.