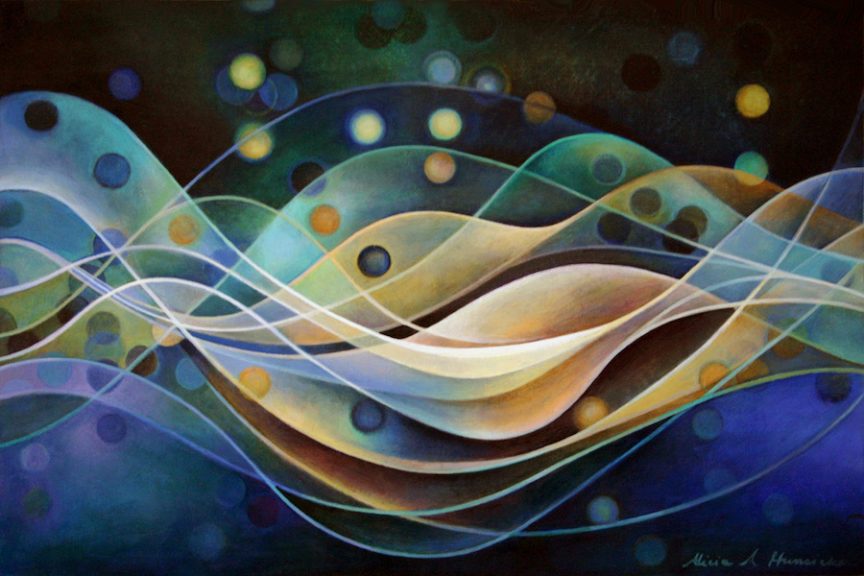 The art definitely came first! I’ve always felt a calling to be an artist. Even in my youngest days, art allowed me to express my ideas and explore my environment as I observed the world around me. My love of art and the visual expression of ideas led me to the University of Massachusetts where I earned my degree in fine arts. My first approach at really expressing myself through art was exploring my interest in nature’s patterns and the interconnectedness of all things through a spiritual lens. However, over the years I began to see parallels in my ideas through a scientific lens, which I was very interested in developing. It was a poignant realization that the concepts that I explore in my work are closely related to ones that scientists are exploring in their work.

Now, scientific observation provides the point of departure for my vibrant compositions of swirling organisms and complex surface patterns that play with the relationship between the cosmos and the earth. My paintings reveal a cosmic discussion about the nature of all things.

The way we view and understand the world is rapidly changing. New discoveries are being made at such a fast rate that scientists and artists can to work together in partnerships, which can yield unexpected discoveries from the different perspectives that each provide. 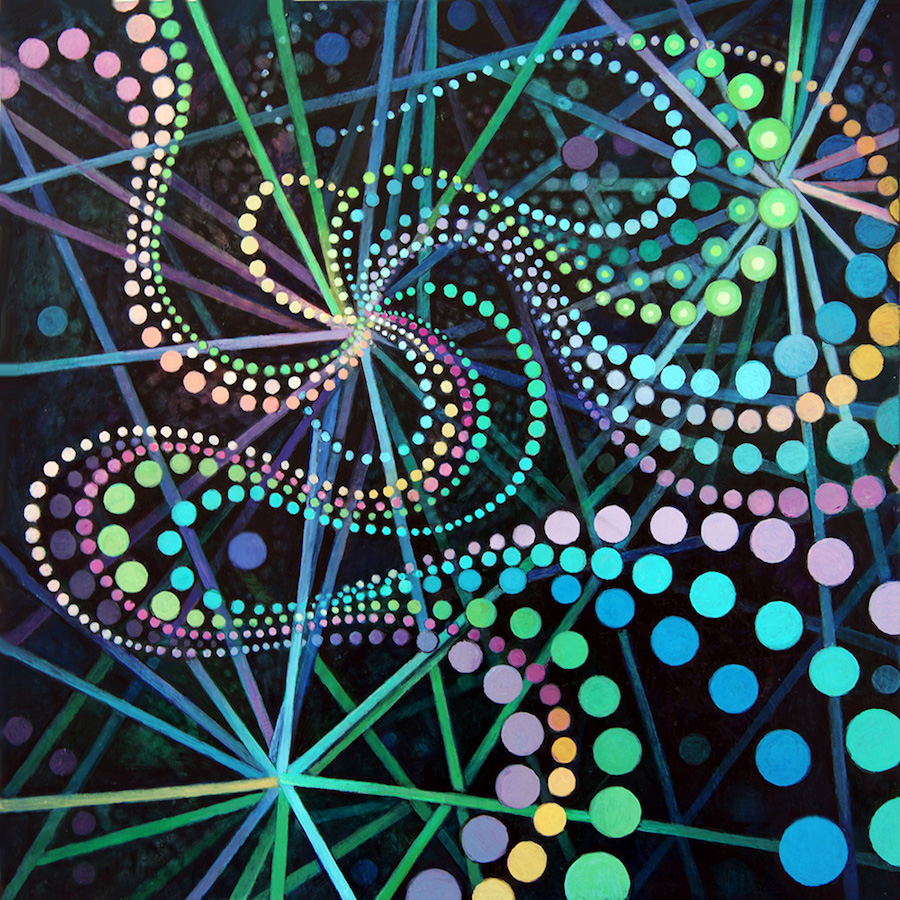 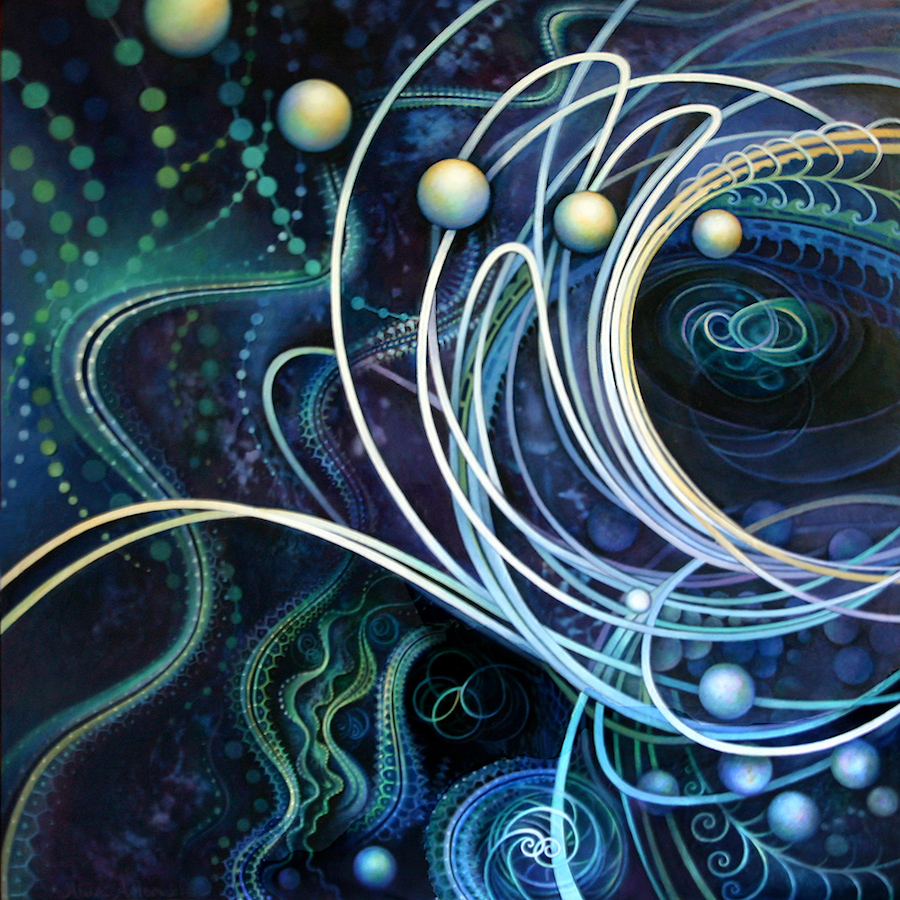 My ideas, themes, and concerns are multidisciplinary and incorporate various aspects of all of the sciences. It is my own personal “Theory of Everything.”

The universal forms I use in my paintings can be read in many ways. Each viewer brings their own history, interest, and knowledge to the work. A circle may be read by one viewer as a planet, while another viewer may perceive it to be a particle. The ambiguity of these forms enables the viewer to experience the work on a deeply personal level.

My intent is that these familiar repeating patterns used in my paintings will activate the viewers’ inner knowing. This awareness and recognition of these commonalities can allow for the viewer to experience an epiphany through this interconnectivity. 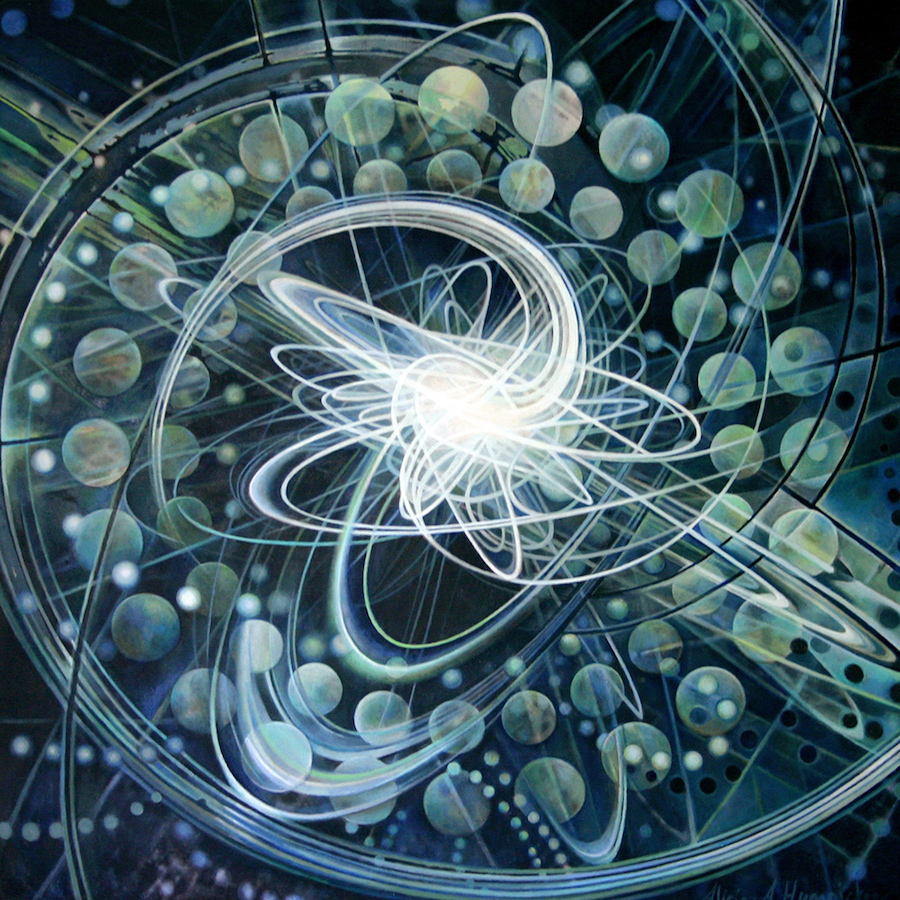 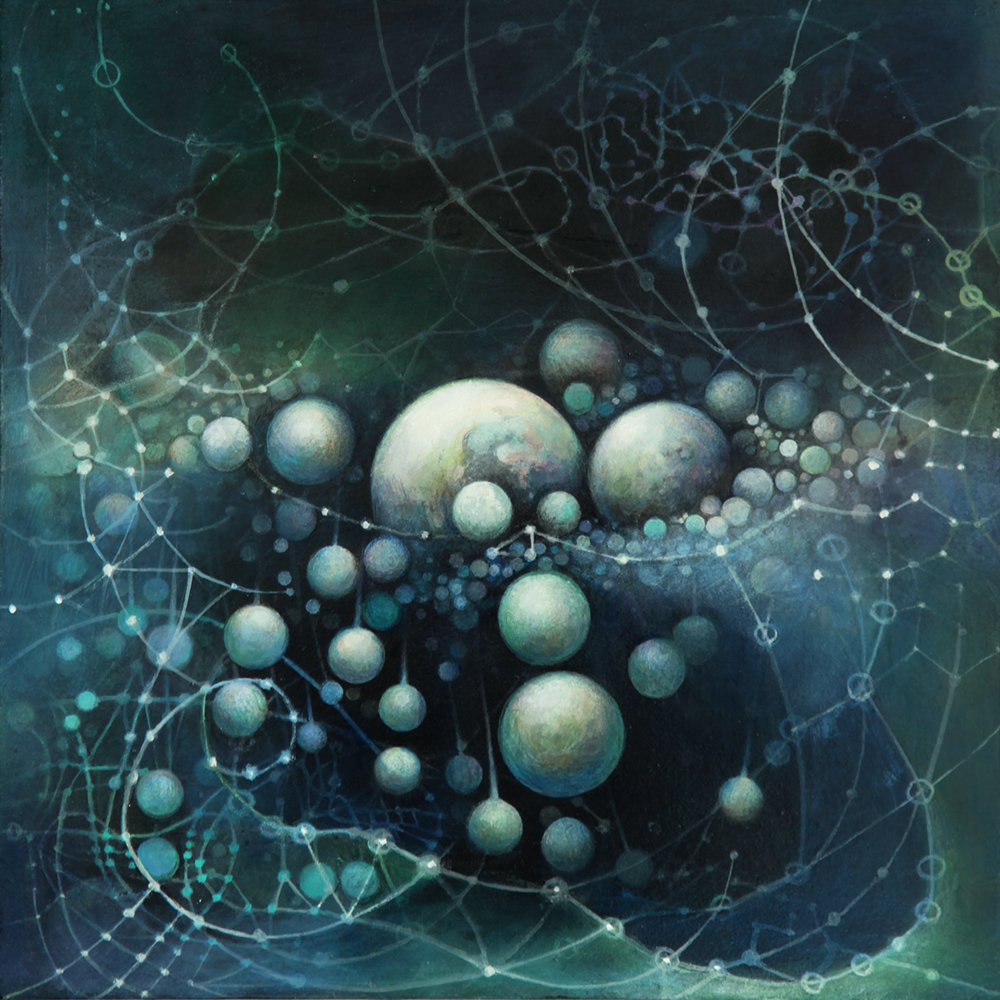 I consider myself a painter exploring the big questions in life. I approach painting as a tool for self-discovery and enjoy the ongoing dialog with the universe that I am participating in through my process.

With a printmaking background, my process crosses the boundaries of medium and technique, combining several methods to achieve a unique style of contemporary painting.

I approach a new painting first by selecting elements to which I am drawn, and the multi-layered process of building a painting ensues. This often includes photography, digital manipulations, Xerox transfers, and traditional acrylic and oil painting techniques. These many layers ultimately transform into the final painting.

This process opens up exploration into concept, imagery, and paint application, which allows me to grow and discover while painting. 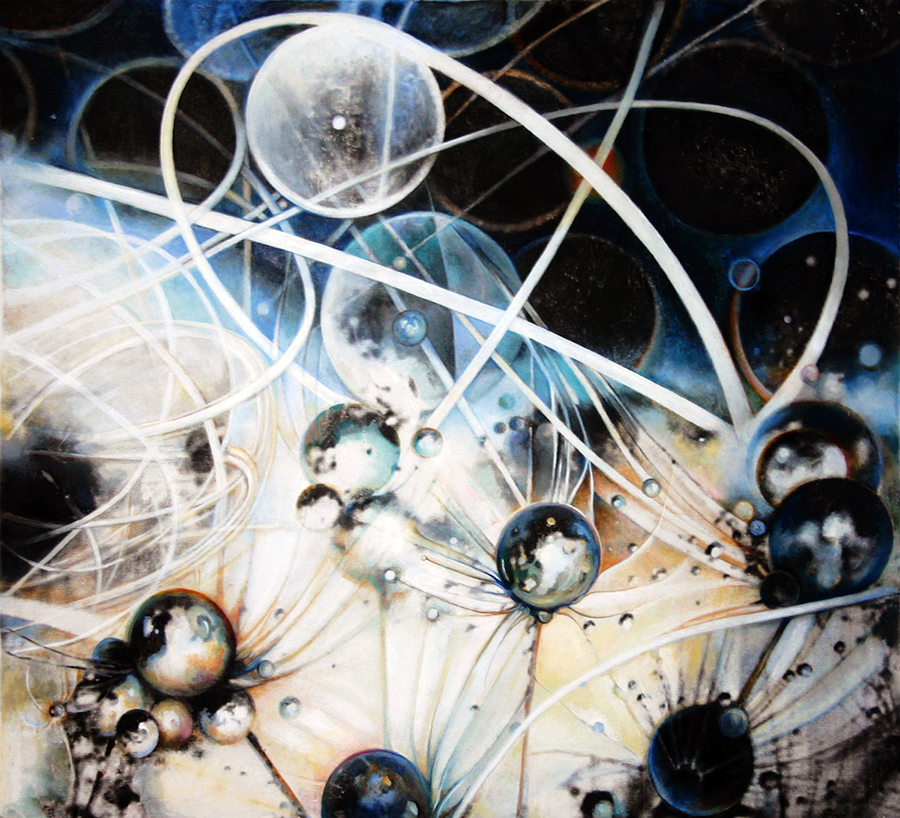 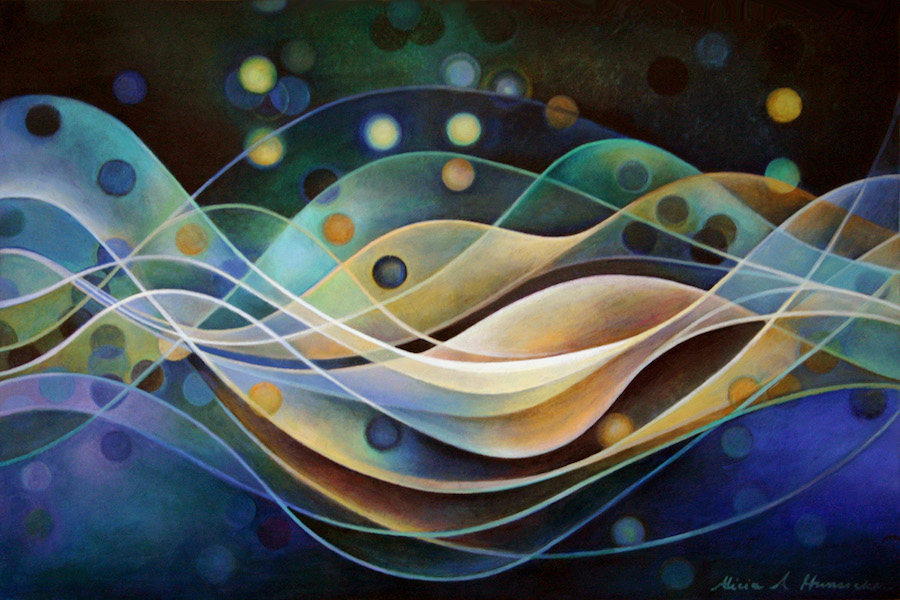 In 2009, The Zendai Museum in Shanghai, China invited me to participate in Intrude Art & Life 366 with a collaborative project called “Eye to Eye.” Traveling to China for the exhibit was fascinating. The history and culture of China made a lasting impression on me.

In 2012, I was invited to participate in an artist residency and museum exhibition in Austria. While there, I was able to take a side trip first to Lyon, France, and then to Geneva, Switzerland, to visit CERN, the European Organization for Nuclear Research. There I toured the facility and met with prominent physicists to further my research into particle physics imagery.

I am inspired by scientists who’s work acts as a bridge to make connections in the greater picture, particularly in regards to consciousness, nature’s patterns, and intelligent energy.

I enjoy the work of interdisciplinary scientists such as Leonardo DaVinci, Amit Goswami, Alan Guth, and Max Planck and have included here some of my favorite quotes as they relate to my artwork by these scientists:

“All matter originates and exists only by virtue of a force which brings the particle of an atom to vibration and holds this most minute solar system of the atom together. We must assume behind this force the existence of a conscious and intelligent mind. This mind is the matrix of all matter.” —Max Planck

“When one studies the properties of atoms, one found that the reality is far stranger than anybody would have invented in the form of fiction. Particles really do have the possibility of, in some sense, being in more than one place at one time.” ~Alan Guth

“What if consciousness is the ground of being? What if the possibilities discovered by quantum physics are the possibilities of consciousness itself? Remember there is already a class of people who think in this way. They are called mystics, and they say it is all God. Finally, a few scientists dared to say that some of the characteristics attributed to God are similar to what we describe as consciousness.” ~Amit Goswami 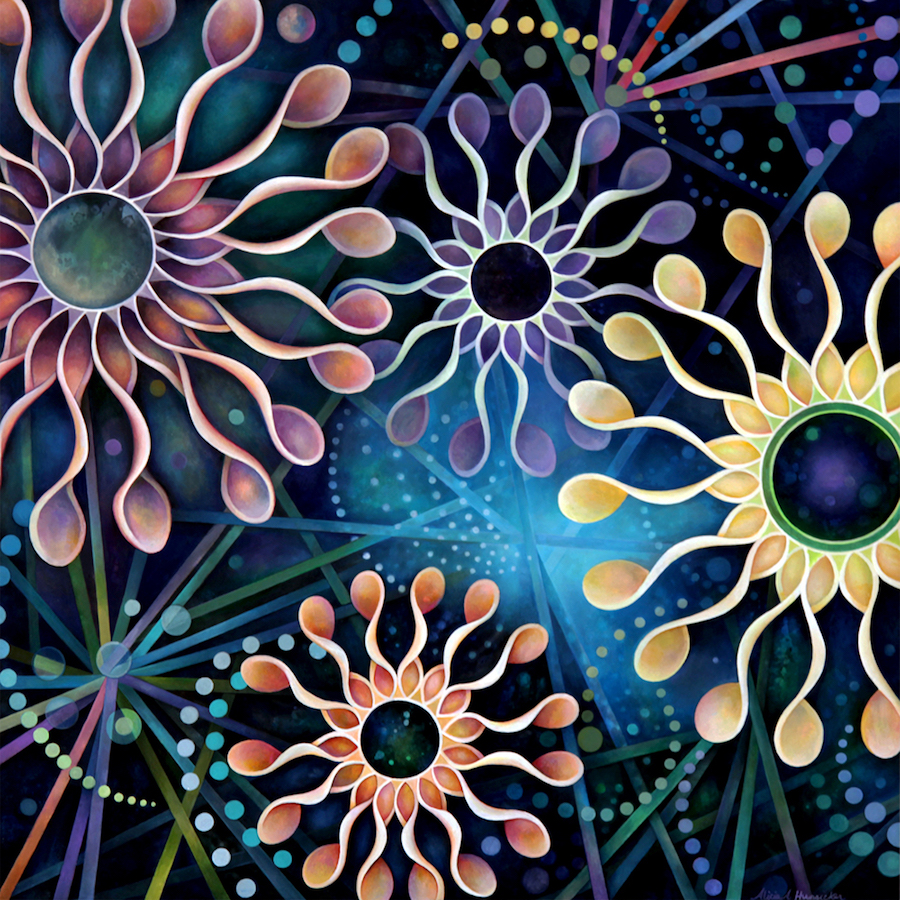 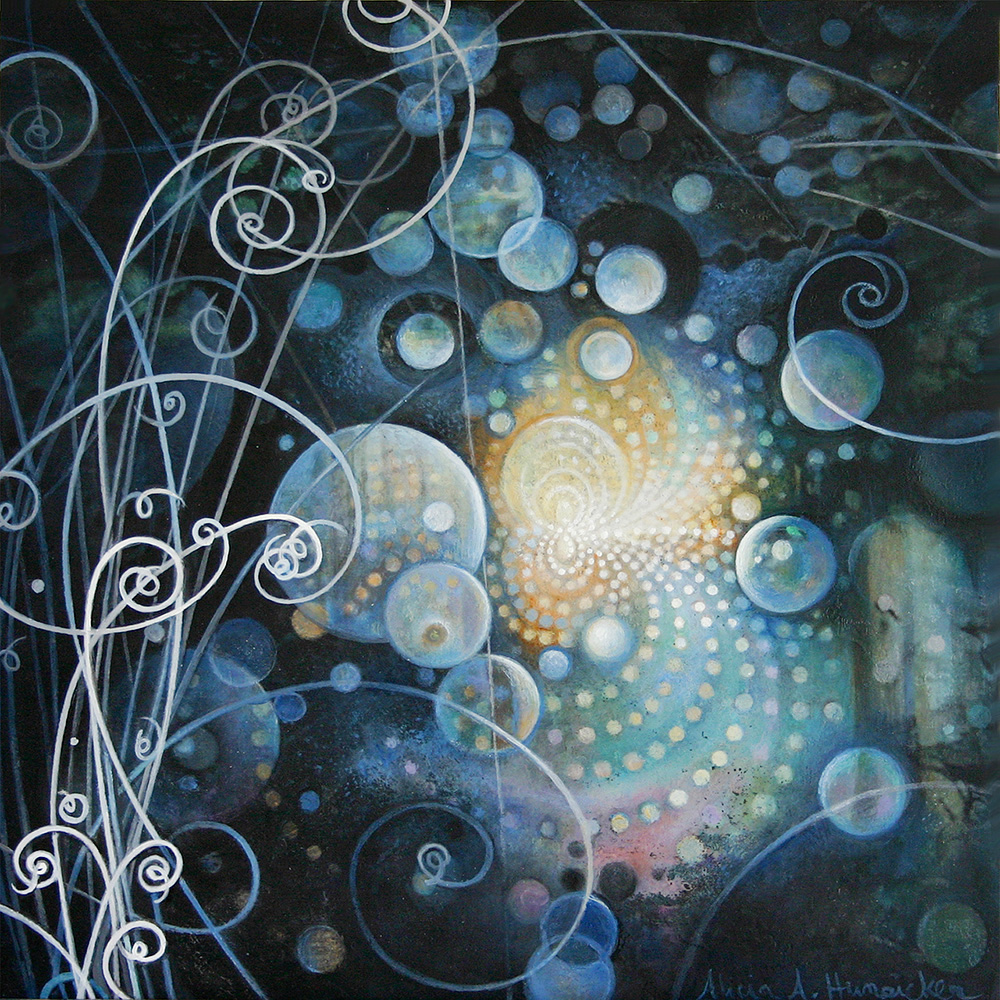 Illumination of the Quantum Field

I am preparing for a milestone exhibition celebrating 20 years of working as a professional artist.  Edenic States will be held next Fall at Hampden Gallery, University of Massachusetts.

Over the years I have built a vocabulary of forms found in my paintings. In my last series I added botanical imagery which has informed the direction of a new body of work. I have a strong concept of this significant shift. which will expand to include organic gestural strokes, larger areas of atmospheric color and an increase in my painterly surfaces

The envisioned body of work is a response to current global environmental horrors. My objective is to demonstrate the interconnectedness of humans and nature as well as to honor nature’s inherent beauty. I feel that there is an importance in recognizing this beauty and feeling our interconnectedness so we can be aware of our impact on environment and each other. I will focus on the use of natural patterns as the common thread found throughout the different sciences.