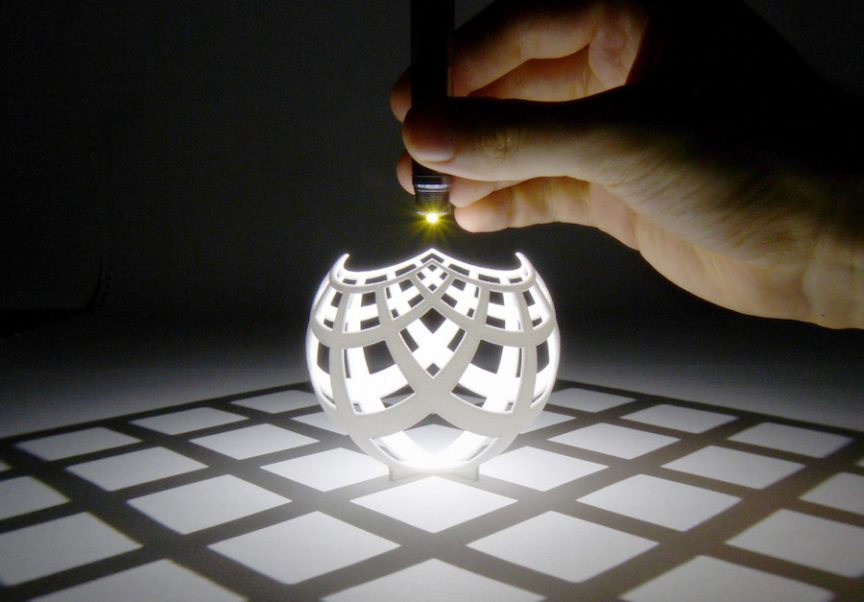 I have always been interested in art, but my career path has been much more about science, or in my case, mathematics. I received my masters in mathematics from the University of Oxford, followed by a PhD in mathematics at Stanford University. I’m currently an Assistant Professor in the Department of Mathematics at Oklahoma State University. The kind of research I do involves a lot of visualization, and drawing good pictures to try to understand what’s going on. For me, the visual side has always been there in the math.

Mathematics, obviously. But more specifically, much of my work visualizes concepts from low-dimensional topology. Topology studies geometric objects such as knots and surfaces, where the exact shape doesn’t matter so much as how things are connected in space. “Low-dimensional” generally means two, three and four dimensions – where we have a chance of drawing pictures. 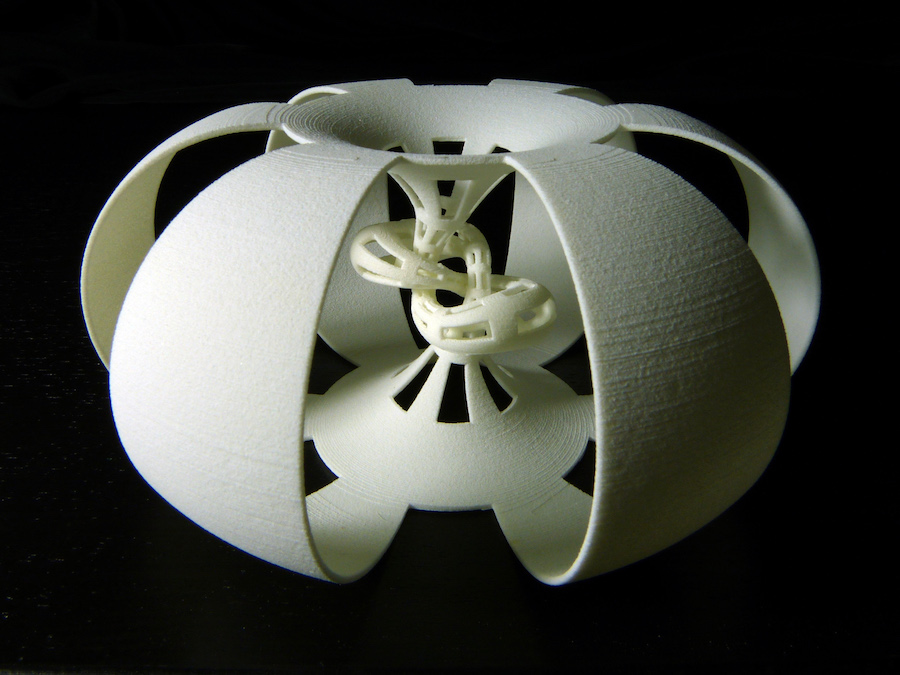 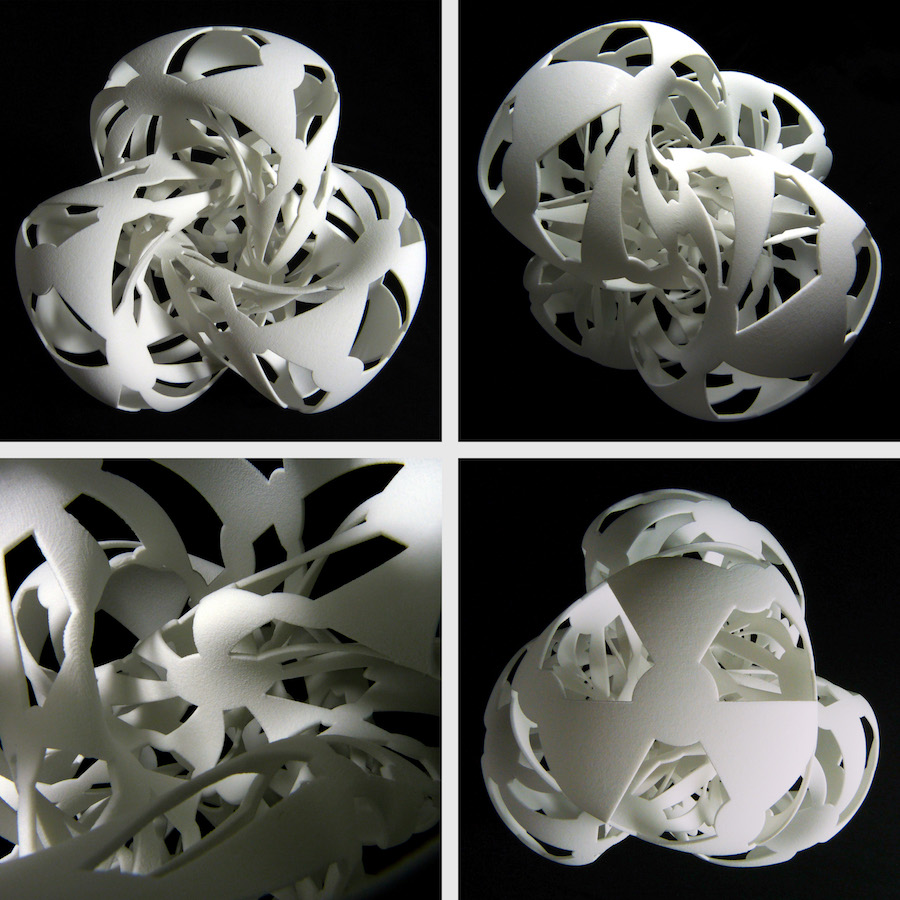 Most of my recent work has been in the medium of 3D printed sculpture, although I also do a fair amount in 2D graphics. Recently I have been playing with spherical video (usually, but incorrectly called “360 video”), and virtual and augmented reality. I work almost exclusively digitally; writing code or using an appropriate computer program to generate a work. Many people in the mathematical art community really like working directly with their hands, but somehow that’s never been very appealing for me. I like having an undo button! It’s also much easier to make copies of a work if it is generated digitally, which is better in terms of making the work accessible. 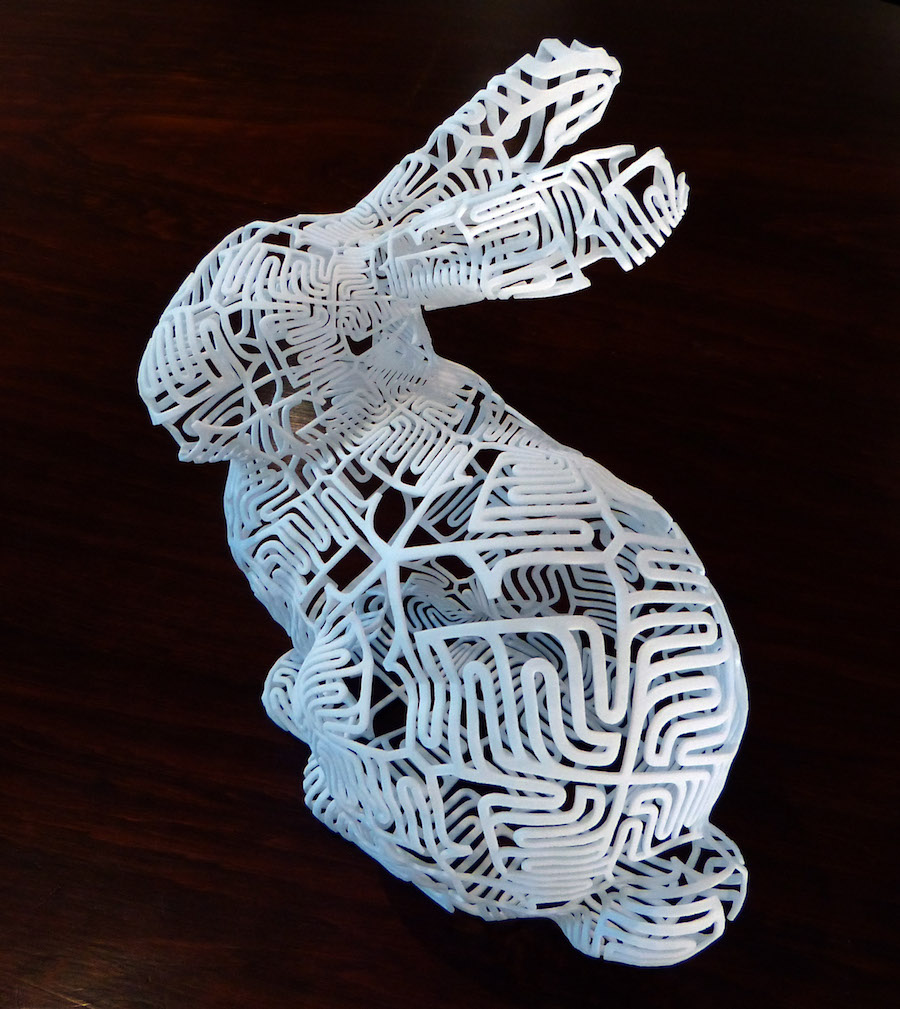 Perhaps my most effective work is “Grid (stereographic projection)”. A light placed at the top of a 3D printed sphere casts a surprising square grid shadow. This illustrates “stereographic projection”, which is the map from the sphere to the plane you get by drawing lines from the north pole of the sphere and sending the point the line hits on the sphere to the point the line hits on the plane. Or in other words, precisely what the light and shadow does. So it’s a very clean visualization – it shows exactly what the mathematical concept is. The very square grid coming from the very round sphere has a “magic trick” feel to it, although of course it’s all real. This is another thing I like about it: the same visualization can and has been made with computer animation, but everyone knows that you can lie with CGI. The 3D printed version is just a flashlight and a piece of plastic, so there’s no possibility of any trickery. 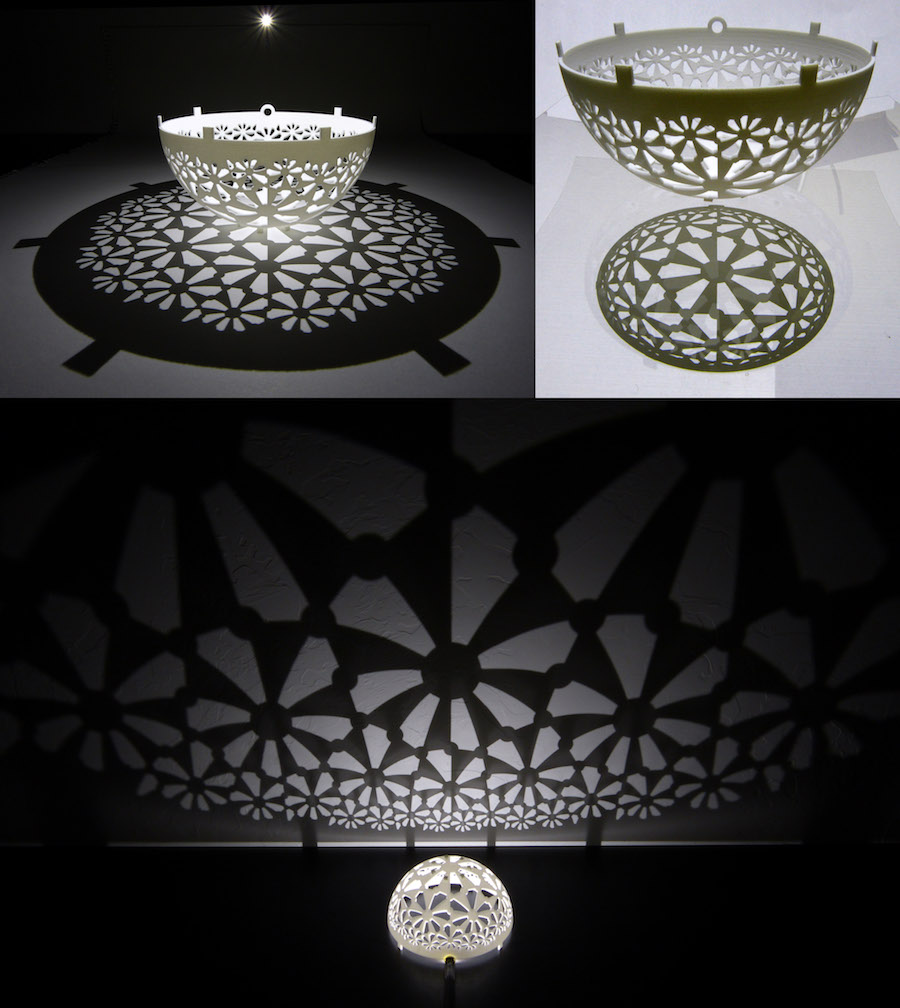 In mathematics, Bill Thurston was an astonishing mathematician – he essentially founded the field I work in, and was truly in a class of his own in terms of visual imagination and creativity in mathematics. He was also passionate about how we communicate and explain mathematics. From the arts side, M.C. Escher is a huge influence for me, and for the mathematical art community in general. In terms of contemporaries, George Hart and Bathsheba Grossman are both pioneers in modern mathematical art, particularly in 3D printing. I’m hugely impressed by the design group Nervous System, and the puzzle/mechanism inventor Oskar van Deventer. I also have many wonderful collaborators with whom I work, on both the math and the visualization sides. 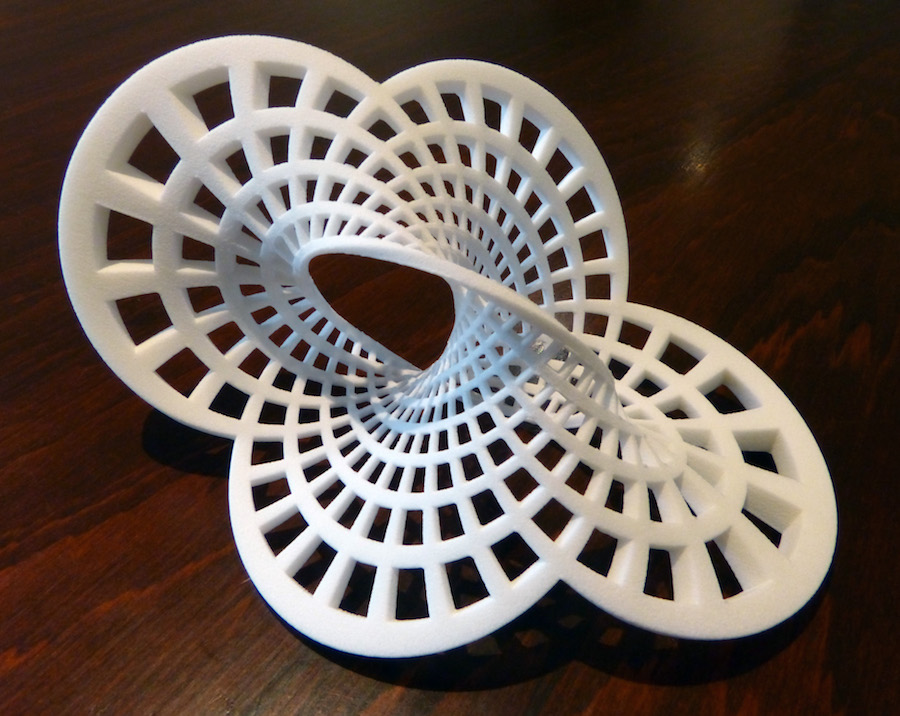 I should mention that I resisted the term “art” for my work for a long time, in favour of “illustration” or “visualization”. Partly this is because there doesn’t seem to be a good definition of what art is, but it’s also because my aim seems to be different. Mostly what I try to do is make a real-life object that visualizes a mathematical concept as clearly as I possibly can. It turns out that the result is often aesthetically pleasing (and that’s not surprising since the mathematics it comes from is itself beautiful), but aesthetics isn’t the point of it. People sometimes see some emotional meaning in my work – but whatever they are seeing I didn’t put it there, it’s just what the math looks like.

I wrote a popular mathematics book, “Visualizing Mathematics with 3D Printing”, published by Johns Hopkins University Press in July 2016. It collects together much of my 3D printed work over the past few years, and adds some mathematical context. Having said that, really the book is more about the mathematics than the 3D prints. The prints let me talk about three-dimensional content using three-dimensional figures. (And why doesn’t the biology textbook come with a 3D model of the structure of DNA?) The sister website lets readers rotate models on screen, or order a 3D print, or download the file to print on their own printers.