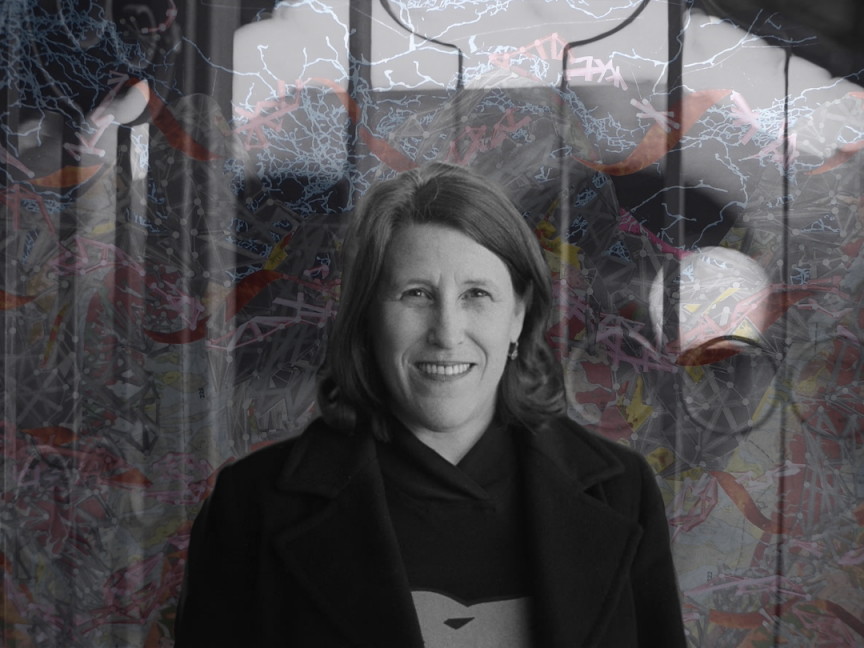 The art definitely came first for me. I have been making art ever since I could hold a crayon. I was raised in a home without television, therefore, a creative outlet was essential. I recently came to the realization that because I studied chemistry as part of my post graduate training in textile conservation, I am more comfortable with scientific concepts than many artists may be.

I started making collages that used maps, which naturally led to geological connections. This led to the topic of natural or un-natural disasters brought about by climate change, alternate energy sources, and techno communication devices that serve to connect us but actually create a disconnect. 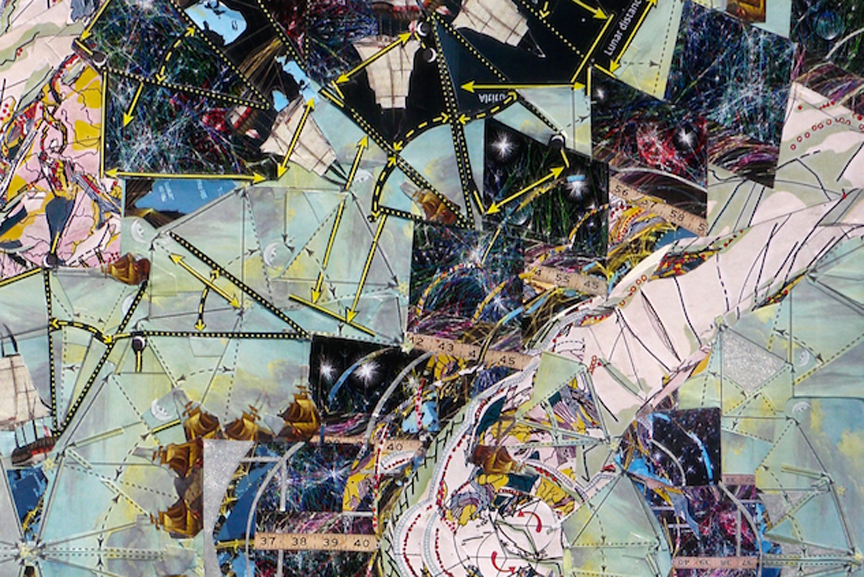 I am most intrigued by theories of physics. My new work illustrates a concept of quantum mechanics; entangled particles encircling the globe and acting upon each other from a distance. It is a theory that is hard to comprehend; my way of coming to terms is to imagine what it looks like. 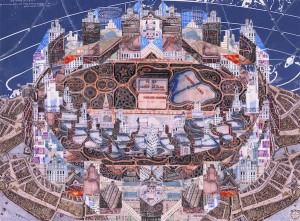 Another collage that illustrates a physics theory is Einstein Thought Experiment in Central Park. It was inspired by a walk around the reservoir in Central Park and a Radiolab episode about one of Einstein’s thought experiments. As described on the program, the experiment involved someone wearing roller blades who was racing an opponent in a jetpack travelling 669 million miles an hour. Different speeds are represented by offset squares in the shape of an arena. Historic landscape diagrams of Central Park are collaged with images of the New York Times building, Times Square, a street and subway map of the area, a historic map of Amsterdam, and a map of the island of Manhattan.

When I appropriate scientific concepts in my collages, I do not necessarily fully grasp those ideas. I simply use them as a jumping off point. 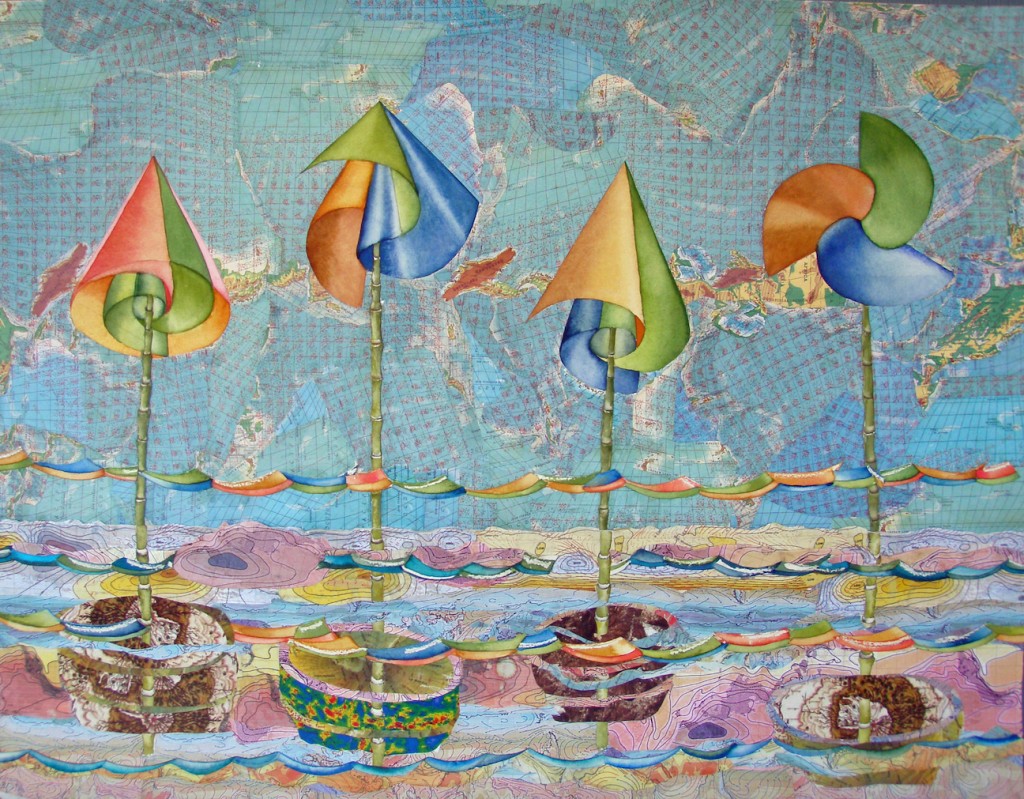 My artwork is collage; using images that are integral to the concept of the piece. Images are not used simply for decorative purposes. In other words, I do not use something just because I think it looks good in the composition.

I begin with a concept, then I sketch a lot to help realize how to illustrate the idea with the most potential. Then I choose the images to use as the collage material, some of these may have been used in other collages. I research on Google Images to find more material to be cut and reimagined. 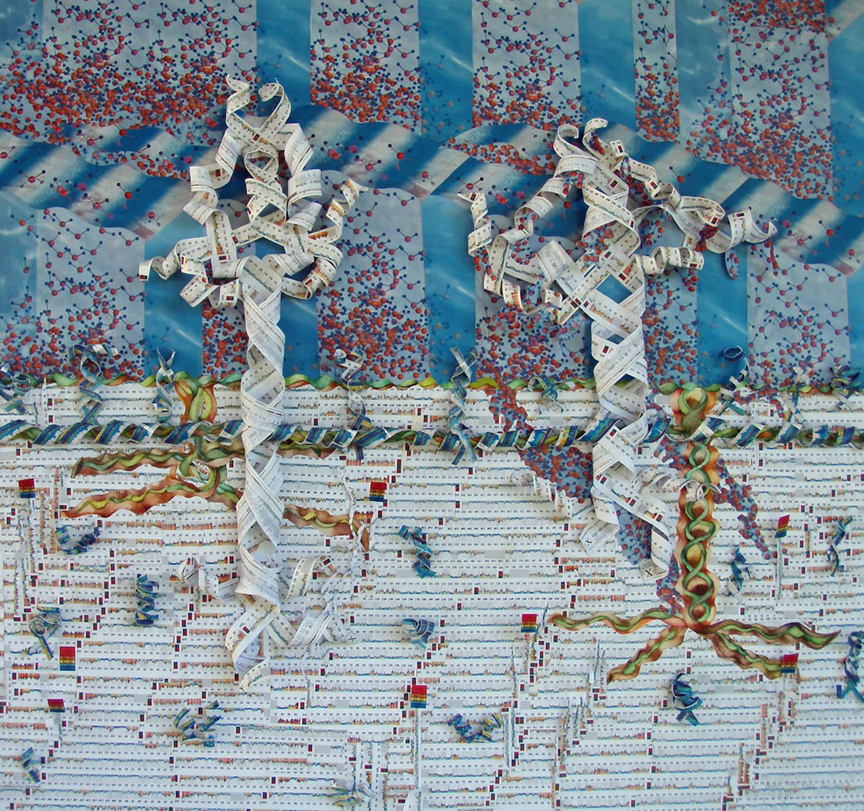 A Tree In A Field

Though my work is constructed with paper and adhesive in a traditional way, it plays with distortions between visual perspective and surface image. Technology allows me to duplicate and manipulate images to fit my ideas. At the same time, my work points up our over-dependence on technology (sometimes in humorous ways).

My collage that is a memorial to 9.11.01, included in the National September 11 Memorial and Museum.