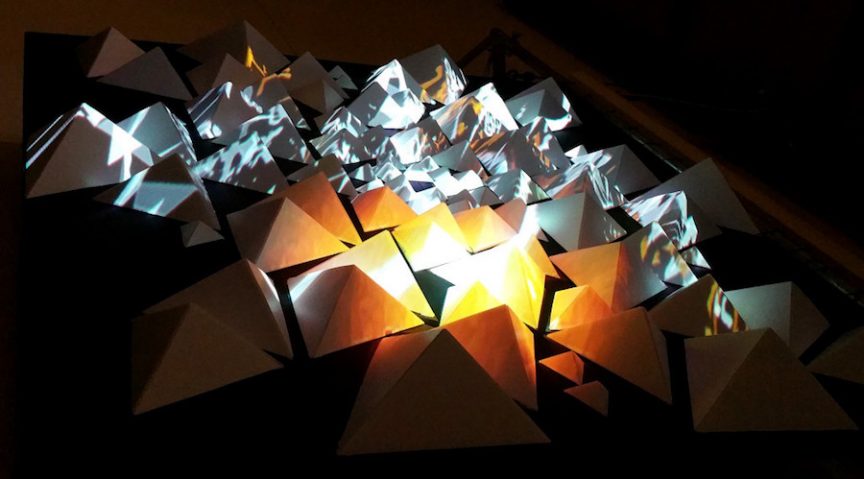 Well, in a strange way it was science, even though I never formally trained as a scientist like I did as an artist. When I was a child my mother told me that if I wanted to work with animals when I grew up I would have to be good at science, so I would write ‘I love science’ all over my notebooks, even though at that age I wasn’t taking science classes yet. As you can imagine, I was a super popular kid… However when I got to high school I had a very uninspiring science teacher who looked and acted more like an army officer. I had this same teacher for science class three years in a row at my small country school. Eventually I dropped out of science completely and turned to art and creative writing instead. I didn’t go on to take science at university level beyond some basic cognitive/biological psychology classes that were a part of my arts degree. It was only about four years ago, when I was a communications tutor and failing poet staring down the barrel of a purely academic career, that I decided to order a couple of college level physics books online, for fun. I started reading a lot about acoustic physics and gravity, as these were the sciences of music and movement, and I began to develop my own theories about synaesthesia that I would present at conferences. It was this that renewed my interest in both science and art at the same time – from acoustic physics and gravity, to sound art and performance, to audio-visual interactive art.

Acoustic physics and gravity are my two main interests, however I am yet to make these come across in my works – I think I’m saving those for something bigger. At the moment much of my work focuses on environmental issues. I grew up down the road from several rainforest national parks in Australia, surrounded by animals, so the big issues in my work are climate change, human impact or engagement with the environment, and endangered keystone species. My philosophy is that art is a platform on which the artist can have their voice heard, so these are the issues that I want to use my voice for. On a related note, I am currently artist in residence at one of the Australian Government’s environmental sciences precincts, which is allowing me fantastic access to a whole range of climate data through air and soil recordings that I will be using for artworks later this year. 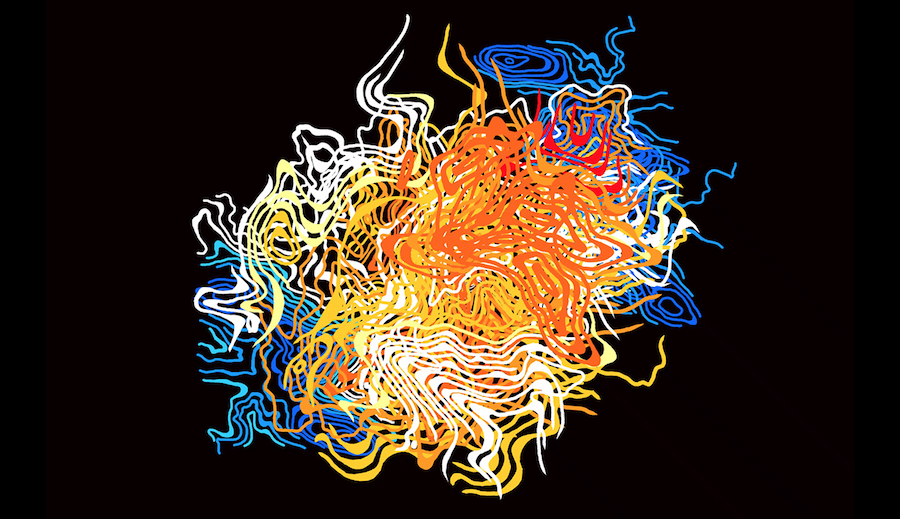 Generally I create interactive installations/experiences: sometimes projection mappings onto buildings or sculpture, and sometimes solely screen-based. I am a bit erratic when it comes to genres – I find myself wanting to try all forms of art. So, when I make interactive screen-based works I either draw digitally on a tablet, use data generation software, or I draw or paint in the real world and scan the images in. For installation works I like to have physical components as well, for example my wall sculptures made from recycled materials and copper that I project onto, or my interactive controllers, which are either handmade crazy remote controllers, or touchable canvas paintings using conductive ink, that the viewer can use to interact with the digital portion of the artwork. Behind the scenes it all takes a lot of technical fiddling and attempting to use software and hardware in new and interesting ways, which can be a very hard thing to install into a gallery that traditionally only has access to basic computers, projectors, and smart screens. But it is nice to, at least in this part of the world, be riding at the front of that wave. 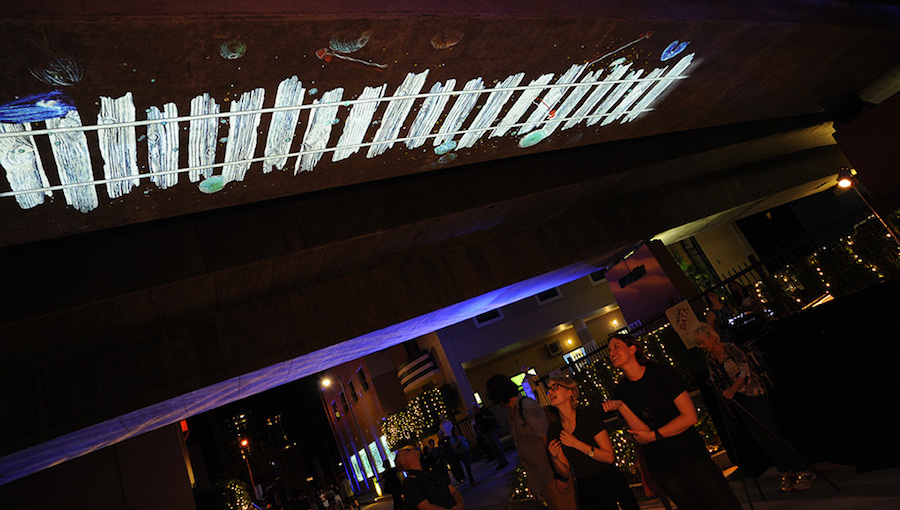 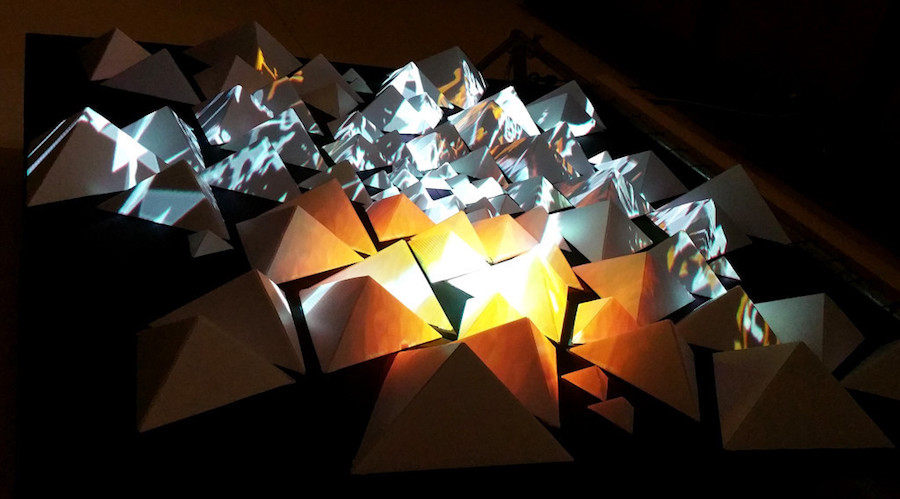 Shadows Blister Those Who Try To Touch

Just a couple of months ago I put on my first ‘event’ solo show, which was a series of projection artworks mapped to trees, logs, and rocks inside a public rainforest in Australia. I called the event ‘Bioluminous Walking’, and for one evening the public were invited to walk through the park and discover the artworks. Some of the projections were very small, so it was a bit like an easter egg hunt. Each video was a frame-by-frame animation of a native animal that would have once been seen in that habitat. One outcome I didn’t expect was people enjoying standing in front of the images – letting the spider crawl on their hands, letting the snake touch their face, patting the dingo: one parent remarked at how amazing it was to see children enjoying, and showing compassion for, harmless animals that are traditionally seen in popular culture as frightening or evil. To make this work I used tiny battery powered projectors so that the audience was not pulled from the magic by seeing the technology, and this was an important part for me. I wanted the technology to be concealed and I wanted to leave no trace on the rainforest itself, and I think this is really what set this projection event apart from other bigger festivals. The entire rainforest was buzzing with sounds of delighted walkers.

I’m also excited about the upcoming video/sculpture works I will be creating as part of my science residency mentioned earlier. I am planning on these being my best works yet (though I suppose all artists plan for that). I will be making two artworks about weather modification and cloud seeding, which is an arm of science that I am currently very keen on – the human who plays god with the environment. Even though weather modification has been done for many years, to me it is still something straight out of science fiction. I think it is a branch of science that will be influencing my work for years to come. 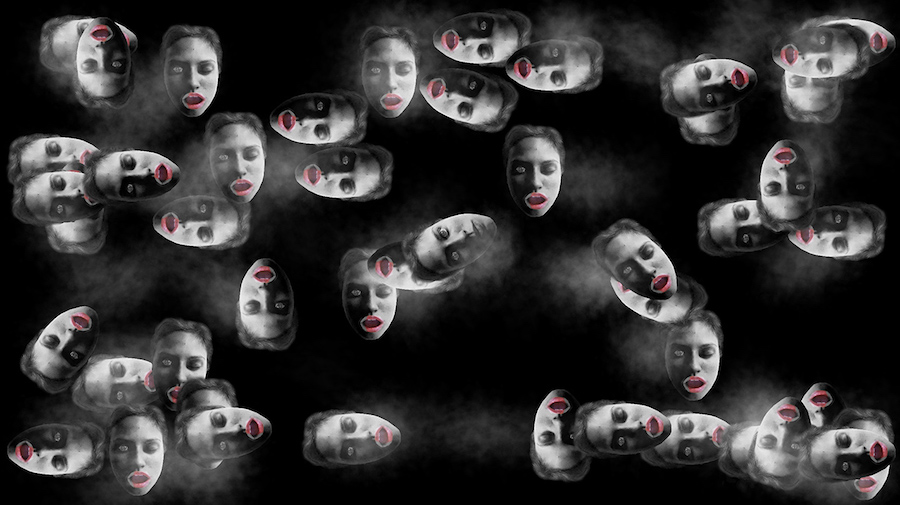