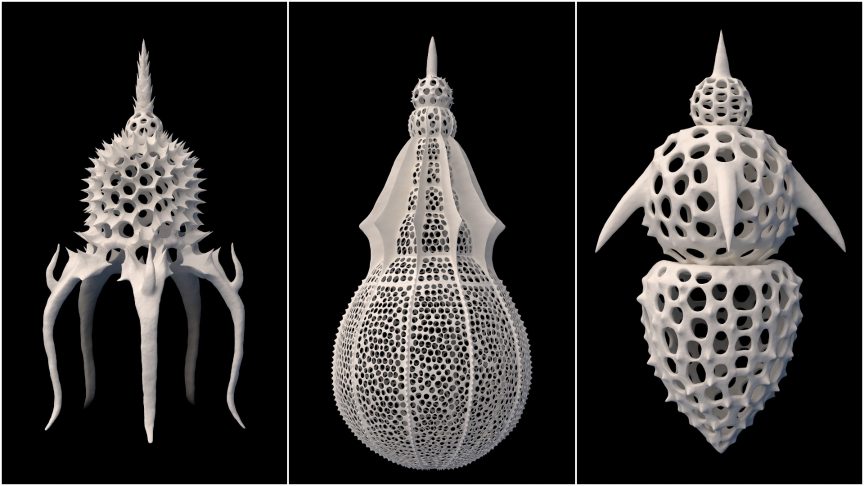 Filmmaker, multimedia designer, creative coder, teacher—Joseph Carr is all of these things and more. Employing a unique mix of digital techniques, the Baltimore-based sciartist creates complex two- and three-dimensional forms that bring together the worlds of mathematics and biology. His detailed, geometric works are spectral and other-worldly—somehow both futuristic and familiar.

Here, Carr tells us about his creative process, artistic inspirations, fascination with Turing patterns, and more.

These two interests have been so interleaved it’s hard to say. When I was a kid in the 1980s I watched a ton of NOVA on PBS and was very interested in a lot of science-adjacent things like wildlife and science-fiction. By the time I got to high school I was taking drawing and photography classes, but like a lot of people I wasn’t sure there was a career in that. All those childhood interests began to pay off, and I found I already knew a lot of the material being taught in my science classes. I had a wonderful opportunity to participate in a mentoring program administered by the National Science Foundation and I enrolled at a magnet school, which helped me enter college with a lot of credit toward a Biology degree. I never finished that degree, because I left school to work as a computer programmer during the final days of the dot com boom. Eventually I completed a BA in Communications, worked briefly as a multimedia programmer, and then was able to go back for an MFA, which brought me into teaching.

If I had to pick one “happy place” it would be the intersection of biology and applied mathematics. I’m propelled (or maybe dragged around) by equal parts curiosity and fascination, so I end up being intellectually promiscuous. I spend more time reading about and watching media coverage of astronomy and planetary science than anything else, but I think that’s in large part because the fields have good press and a lot of enthusiastic followers. I still love the life sciences, which I read about in the news sections of Science and Nature, but there’s relatively less high quality coverage of life sciences in the popular press.

Probably the best examples of concepts that tickle my curiosity and fascination bones are Turing patterns and cellular automata. In both cases, these are mathematical systems (devised by people we associate with computer science) that have analogs in biological systems. There are multiple levels to engage curiosity: how does the math work, how does the chemistry work, and how can we implement these things in computer code? And they’re also visually fascinating systems that can produce amazing varieties of form.

I constantly return to digital methods and techniques, whether that’s digital photography, video, or totally synthetic, computer generated images. I do like objects and physical media—I’ve made books and cyanotype prints, and I seem to have a hoarding problem when it comes to cameras and anything optical—but at several points in the past I’ve sworn off making things in favor of a more compact, fully digitized creative life.

There’s something tremendously appealing to me about the idea of using code and data as art-making materials. I love the clash of ideas in putting “The Proceduralist Manifesto” (1989), by Judson Rosebush, up against “On ‘Sourcery,’ or Code as Fetish” (2008) by Wendy Hui Kyong Chun. Is source code, as Rosebush might contend, and as Chun phrases it, “the ultimate performative utterance”?

Artwork you are most proud of:

Of my recent work, I think I’d select the series of 3D renderings that remake an Art Nouveau print by Ernst Haeckel. I enjoy the idea that my digital renditions could appear to be the output of a generative design process, so have a contemporary look. That echoes Haeckel’s depictions of radiolarians, which were drawn from the cutting edge science performed on the Challenger expedition‘s trawls of the Mariana Trench and were au courant with late 19th century aesthetics. (That said, Haeckel as a historical figure is a cautionary tale about science communicators and popularizers overreaching in their conclusions.)

There are too many to list so I will narrow my answer to include some researchers who taught me directly and some people who are currently creating great sciart and scicomm. My closest brush with a real scientific celebrity was a class visit with Knut Schmidt-Nielsen, whose textbook, Animal Physiology, I had been studying that semester. Dr. Schmidt-Nielsen was a great storyteller and an amazing explicator of principles, for example, countercurrent exchange in the noses of desert rodents, duck feet, and dolphin fins. But the high point of my education in biology was an internship in Dr. Sue Moenter’s lab that spanned several summers, during which I was able to contribute to actual research into the endocrinology of mammalian reproduction.

I’m constantly inspired by people who are out there getting the job done. One of the best science communicators working today is Emily Lakdawalla, who blogs for the Planetary Society. Lakdawalla explains results clearly, with appropriate context, and is an exemplar of responsible science writing—neither hyperbolic nor reductive. Definitely check out her montages of solar system objects made to scale with normalized albedo and their terminators aligned.

My favorite science video series on YouTube, Emily Grassley’s The Brain Scoop, is an enthusiastic romp through natural history collections. I confess that I’m nostalgic for the early days of the series when Grassley was an art student with a weird interest in taxidermy preparing specimens for a small campus natural history museum.

Finally, I want to quickly mention several of my favorite sci-artists who have a good presence on the web and social media: Lizzie Harper, who is primarily a botanical illustrator but also a generous teacher, Carim Nahaboo, who does amazing entomology work, and Charles Krebs, who both makes amazing photomicrographs as well as sharing great information on technique.

I love working with scientists and I’m available for commissions!