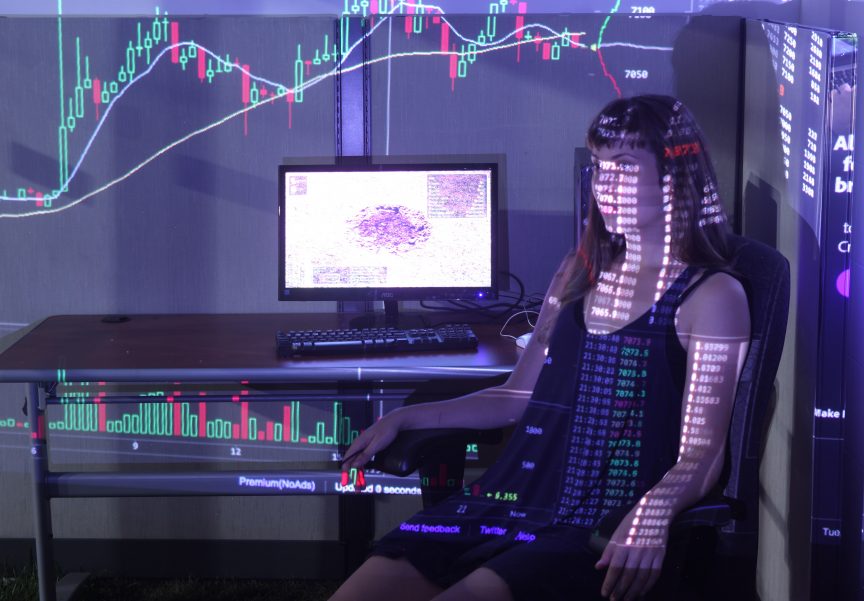 The easy answer is art because it’s what I studied in university, but the easy answer is too easy and the real story is always mixed. My grandfather was a painter, and I spent many hours with him in his studio as a child – but I  was also a mathlete.

Later, in high school I took mostly art classes but the reasons are complicated. I won the science award in grade 10, which meant I had the highest science grade in the school, but during the awards ceremony I didn’t go up on stage to accept because the other students kept chanting “NERD, NERD, NERD” over and over. I dropped all my science classes for the year after. I didn’t have a lot of friends – instead, I stayed up late in my room by myself writing my own blog templates in notepad and posting in various bbs’. So despite my art degree, part of my wants to reclaim these things, say: “I was always technical.” “I always loved science.” Or maybe just, “I belong here.”

Computer science. More specifically maybe, distributed systems, cryptography, network science, a bit of economics? I work in the blockchain industry, which borrows a little bit from all of these disciplines but is more anarchic than all of them.

I’m doing a project right now with a DCGAN (deep convoluted generative adversarial network), which would be machine learning. A bit of a departure, but having too many interests is an ok problem to have.

Almost all of my work is software, often browser-based games and interactive experiences. I like working in the browser for the same reason I like working with games – it feels like a people’s medium. Sure, these works can be exhibited in galleries and museums but their true home is on your phone or computer. I am skeptical of privileged exhibition sites and precious objects.

I like to think of software as an art medium, and engage with it the way a painter interacts with paint: sometimes the accidental brushstroke is the most beautiful.

Probably ClickMine is my most well-known and widely exhibited piece. It’s a blockchain based clicker game that mints a token on the ethereum blockchain – except that the token is hyperinflationary. I recently exhibited it at The Brandscape in Toronto, which is my favourite installation of it so far. It was in an office cubicle with a desk set up inside, and I covered the floor of the gallery with living sod. Over the course of the exhibition the grass died – making literal the onscreen environmental degradation.

Personally though, I still think You Are A Rock is my favourite work. Many of the themes from ClickMine are there too, in their infancy.

On the science side, Alexandra Elbakyan is inspirational. I believe strongly in freedom of information and open access to science, perhaps partly because I’m a self taught developer and grad school dropout. I hope she perseveres, and stays as free as the research she distributes.

Additionally, maybe Trevor Paglen – I really appreciate the counter-surveillance and mapping efforts of his earlier work. Moxie Marlinspike, co-creator of the signal protocol, has done far more than most to bring strong encryption into mass adoption. Finally, Ingrid Burrington’s investigations into the materiality of technology are always fascinating, funny, and poignant.

Thanks for reading, and don’t give up.