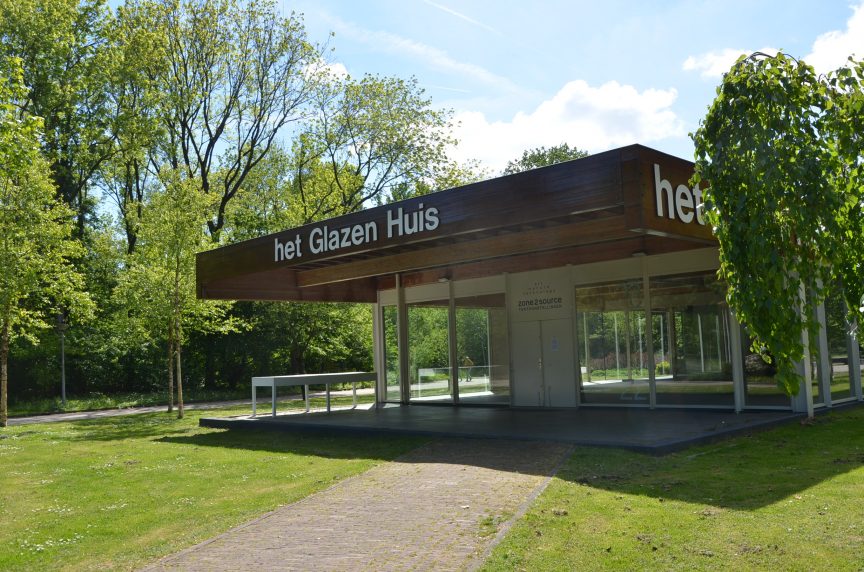 Deep in Amsterdam’s Amstelpark, tucked between the trees, stands a large glass house full of strange and beautiful objects.

Het Glazen Huis (which literally translates to “The Glass House”) is the stunning presentation centre of Zone2Source, an international exhibition platform that invites artists to develop alternative creative projects exploring the ‘natural’ environment. Through public art shows and performances, the organization invites audiences to “imagine possible worlds on the cross points of art, science, and nature”—to reconsider the relationships between humans, technology, and the natural world.

Zone2Source’s next exhibition, Waiting Room, launches September 7, 2019. The soundscape is the creative brainchild of Finnish author, scriptwriter, and playwright Laura Gustafsson and New York-based visual artist Terike Haapoja. The auditory exploration examines the tenuous relationship between society and slaughter animals, highlighting the ways in which we both rely on these creatures and render them invisible.

In this brief interview, the artists discuss the inspiration for the exhibition and the creative process behind it. They also share images from their previous exhibitions, to offer a taste of what’s to come:

What was the inspiration behind Waiting Room?

It all started with an idea we came up with while planning our first exhibition, Museum of the History of Cattle, in 2013. In this work we sought to describe Western history, mainly the past 150 years, from the perspective of cows. The piece ended up telling us more about our own species than the cattle—which is understandable, since humans have influenced these animals’ lives so much through domestication, breeding, and the processes that followed industrialization. While working on that exhibition, we discussed how adding a soundscape of a slaughterhouse would have acted as a strong reminder of the actual bovine beings whose bodies and work the human society is quite dependent upon. But this part of the exhibition was never carried out.

When we had the opportunity to create a work in Zone2Source’s glass pavilion, we instantly thought of that original soundscape idea. We felt that the transparency of the building would contrast well with the invisibility of the violent practices that surround us in everyday life. Animals are everywhere, but we often choose not to see them. We give them new names—beef, pork, poultry, seafood, ribs, meat, etc—and people fail to see that there are actual individual beings behind these words. Hence the audio: people see and taste the bodies of these animals but they never have to hear their voices.

“Animals are everywhere, but we often choose not to see them… People see and taste the bodies of these animals but they never have to hear their voices.”

Tell us more about the exhibition. How did you create the soundscape?

We chose not to make our recording in the actual space where the killing takes place. Even without seeing the slaughter, it felt too gory, too agonizing. Instead, we chose to record in the space where the animals spend their last hours. In slaughterhouses there are “waiting rooms”—barns where the animals go to calm down before they are killed. It may sound compassionate, but there is a very practical reason for this practice: meat doesn’t taste as nice if the animals are too stressed when slaughtered.

“In slaughterhouses there are “waiting rooms”—barns where the animals go to calm down before they are killed.”

Our original plan was to reconstruct a peaceful moment during which the audience could contemplate the inevitable death that all living things must eventually face. But the animals wouldn’t let us. It felt as though it was their will to be heard as themselves, instead of submitting to becoming some kind of symbolic representations of mortality.

They were alive. Now they are not. Het Glazen Huis will be haunted by those pigs.

Tell me more about the research process. What methods did you use?

Waiting Room includes an archival element exploring the concepts of terror and terrorism. This Terror Archive presents law as a medium through which beings become visible or invisible to society. The work maps out state-sanctioned policies that protect the meat industry from the eyes of general public, the legislation that regulates the use of animals, and the laws that define personhood as opposed to ‘object’-hood.

On the opening weekend of Waiting Room, Zone2Source will host a symposium discussing these issues, as well as the ways in which a person can resist the system.

Waiting Room launches September 7 and will run until November 10 at het Glazen Huis, Amstelpark, Amsterdam. Find out more about the exhibition at the Zone2Source website.